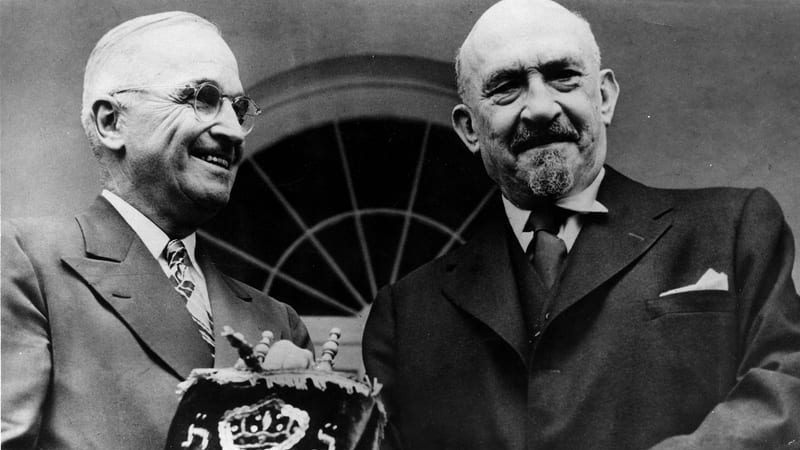 About a decade after he left the Oval Office, Harry Truman hosted an emissary from Israel’s prime minister in his Independence, Missouri, home. After sharing a stroll around the neighborhood, greeting all and sundry as he typically did, Truman and the Israeli returned home and sat down for a talk. Eventually, Truman warmed to telling how in a one-on-one talk, Chaim Weizmann, the Zionist leader, convinced him to give diplomatic recognition to Israel the moment it declared independence.

The emissary, the late Yehudah Avner, recounted this moment:

Leaning back then, right foot on left knee, Harry Truman began to speak about his own State Department as if it was the enemy.

“I knew then what I had to do,” he said. “I had to handle those stripe-pants boys, the boys with the Ha-vud accents. Those State Department fellows were always trying to put one over on me about Palestine, telling me that I didn’t really understand what was going on there, and that I ought to leave it to the experts. Some were antisemitic, I’m sorry to say. Dealing with them was rough as a cob.”

Truman’s recognition of Israel shocked the State Department. State reasserted itself with constant resistance to Israel. When every single Jew was expelled from the Old City of Jerusalem and the synagogues there razed, State was indifferent. After the war, in the face of constant terror attacks from Egypt and Jordan, and in the face of Jordan’s refusal to honor the armistice by allowing Jews to visit holy sites and to use the Hadassah Hospital and Hebrew University, the State offered Israel little support.

In his old age, Malcolm MacDonald reflected on the policy he spearheaded while acting as Neville Chamberlain’s colonial secretary. It’s well known that Chamberlain and his cabinet championed appeasement, believing in all sincerity that they could achieve “peace in our time” by dramatic concessions to Hitler’s aggressive demands. Less well known is that this government simultaneously denied Europe’s Jews the possibility of escaping Hitler to the land Britain had been entrusted to develop into a national home for the Jews. MacDonald oversaw the implementation of the infamous White Paper of 1939, which closed the door to Jewish immigration to the Holy Land, something that had been guaranteed by former British policy statements and the San Remo treaty.

Now, decades later, after World War II, MacDonald attempted honestly to explain himself. He acknowledged fully the failure of appeasement and the horror of the Holocaust that his policies made nearly impossible to escape. MacDonald told his interviewer that he knew war with Germany was imminent, so his policy reflected a cold, hard fact: the Jews would not side with Germany no matter what policy he made, but the Arabs might be wooed away from supporting the Nazis if Jewish immigration were ended.

This idée fixe guided British foreign policy throughout World War II. The British Foreign Office, equivalent to our State Department, opposed any project that might rescue Jews if it would lead to objection from the Arab world they were still trying to control. This Foreign Office policy survived under Churchill and under the postwar Labor government, even though both had been highly supportive of the needs of besieged and then decimated Jewry before attaining power.

The American State Department was not more sympathetic to the plight of the Jews than the Brits were. When the Nazis implemented their program of eliminating the Jews, quotas established by Congress for admitting Jewish refugees to the U.S. were already very low. But those tiny quotas were too large for Undersecretary of State Breckinridge Long. As the World War and Holocaust engulfed Europe’s Jews, Long issued a secret memorandum to all embassies and consulates that, regardless of the Jews’ imminent peril, and despite the fact that by law there were visas for at least a small number of them, the State Department officials were to “delay and delay and delay” the issuing of those visas. It was not until investigators from the Treasury Department uncovered this secret policy and churned up a wave of public revulsion that State was finally overruled. President Roosevelt only moved to intervene when this wave of revulsion threatened him politically — a move that was typical of his own thoughts and methods. As historian Rafael Medoff has recently put it, Roosevelt preferred that the Jews should be quiet. In the end, Long’s policy was largely upheld, and those who were not allowed to of fill quota places filled the rolls of the extermination camps.

After the war, when many of the shattered survivors had come to the land of Israel to try to live as an independent people, the U.S. State Department advised strongly against supporting an independent Jewish state. They preferred instead that the land should remain as a trusteeship, indefinitely postponing the promised national home. Classic State here, but there had been a real change in the chief executive. As we have recounted, the fiercely independent Harry Truman stepped in to overrule the State Department and recognized Israel immediately on its declaration of independence, a move that shocked the entire State Department and was taken by the secretary of state as a deeply personal rejection.

For decades, presidential candidates of both parties promised to move the American embassy in Israel to Jerusalem. Congress mandated that the president should do this as well. They all realized that it was absurd that any country should tell another sovereign state that they know better where its capital is — that was only done to the Jewish state.

But absurdities are what often rule in the Deep State. Not one of those candidates when elected ever followed through on his promise or on Congress’ mandate. Advice from the foreign policy experts trumped campaign promises and the will of the people.

It looked the same this last time around, in the Trump administration. Former UN Ambassador Nikki Haley wrote, “At the critical National Security Council meeting with the president on the Jerusalem embassy decision, myself, Vice President Pence, and Ambassador David Friedman spoke out in favor of the move. Everyone else either opposed it or expressed strong reservations.”

Though this move was perennially popular with the electorate, and candidates from both parties ran on it, State was used to scuttling the move when it came to implementation.

But not this time. Once again there was a will in the Oval Office to override State, and for pretty much the same reason that Harry Truman crossed the “striped pants boys” — the old policy was anti-Semitism cloaked in fancy language and all the expertise in the world couldn’t make that palatable to a president not inclined to defer to others’ claims to exclusive competence.

So it went not only for Jerusalem but also for the Iran nuclear deal, which guaranteed nuclear weapons for Iran to use against Israel in 10 years, and for defunding UNRWA and its collusion on multiple levels with those seeking the destruction of the world’s only Jewish state. State was defied. As Haley wrote, “The president made the decision.”

The more things change, the more they stay the same. At State and at the British Foreign Office, the entrenched careerists have all too often felt entitled to set foreign policy rather than heed the elected authorities. They, after all, are the experts. Why should they bend to mere elected politicians, or the people who elected them? And more often than not, the expert opinion of these Deep-Staters was anti-Semitic, unwilling to do much to help the Jewish people even in their direst emergency. For these experts, there are always more urgent priorities.

Thanks to Providence that our Constitution still gives our president supreme power over the entire executive branch, including even State. And thanks to Providence that sometimes there has been a president who has had the courage to use that power in the face of those who would usurp it, all with the best of intentions, but to the detriment of America, the Jewish people, and the cause of freedom.