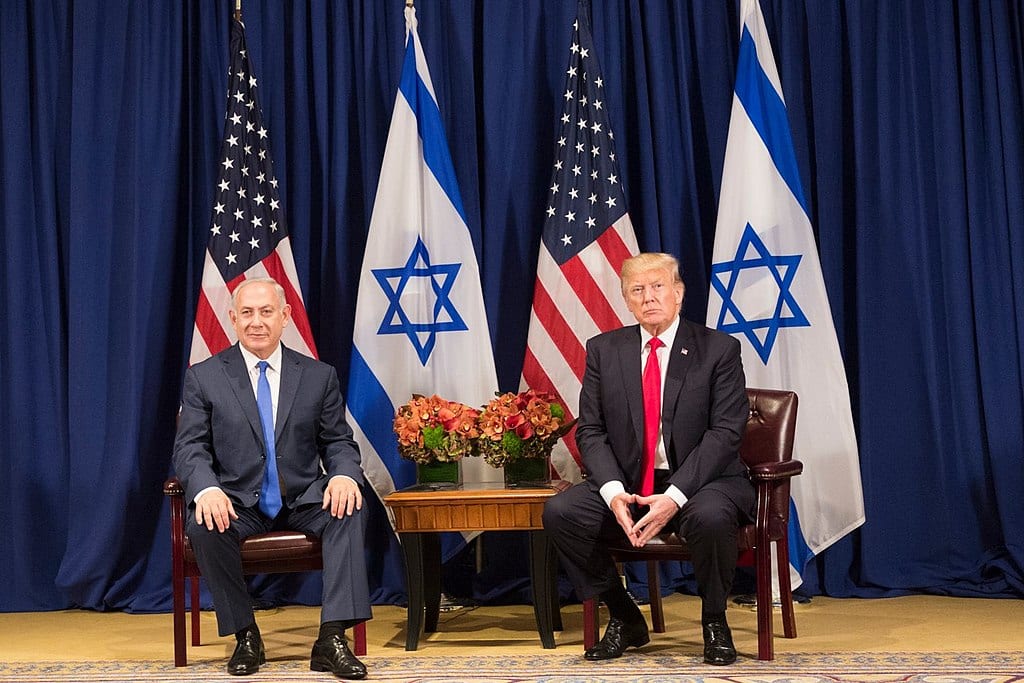 President Trump is obviously puzzled and dismayed by the fact that most Jewish voters will vote for virtually any Democrat instead of him next year.

Giving voice to his puzzlement last week, and responding to the latest from Nancy Pelosi’s favorite anti-Semites, Reps. Ilhan Omar and Rashida Tlaib, Trump said that Jews who voted for Democrats were displaying “a lack of knowledge or great disloyalty.”

That comment was, at best, foolish. It echoed the centuries-old anti-Semitic trope that Jews have divided loyalties and immediately drew heat from the usual Trump-haters and a few Trump allies.

What are we to make of this? Trump’s foreign policy is transactional: Is he hinting that his support for Israel will fade after 2020 if he doesn’t get the support of Jewish voters?

Trump’s steadfast support of Israel has been one of the primary markers set in his presidency so far. He has supported Israel as much or more than any president in decades. Israel is deserving of our strong support — on which it depends for its national existence — on its own merits. It is our only real ally in the Middle East and a bulwark against Iran. Its enemies are, in the most literal terms, our enemies. To Iran, America is the “Great Satan” and Israel is the “Little Satan.”

Trump’s family and friends include many Jews on whom he relies more than anyone for advice on both foreign and domestic policy. Obviously, he is not an anti-Semite.

American Jews number somewhere under seven million, less than 2 percent of the population. Let’s take an educated guess and say that 50 or 60 percent are of voting age. That means the “Jewish vote” weighs in at three or four million.

These votes are concentrated among about 94 congressional districts in places such as New York, Florida, and California. Thus, while Jewish votes are important in those places, their collective effect isn’t going to win the popular or electoral vote for Trump regardless of what he says or does. Thus, the Jewish vote will not in any way be decisive next year.

Jewish voters have supported Democrats over Republicans in every presidential election since 1932. Today, about 75 percent identify themselves as liberals. Eighty percent voted Democratic in 2018.

As long as Israel struggled to survive, American Jews were generous in their support. But something began to change in the mid-1960s.

When the Arab nations attacked Israel in 1967, its military quickly defeated them in the Six-Day War. Heroes of that war — such as General Moshe Dayan, with his dashing eye-patched appearance — became symbols of Israeli strength.

In 1973, the Arab nations attacked again, but this time the Israelis — for the first few days — looked as if they might lose and be wiped out. U.S. Air Force combat aircraft were being armed and fueled in Germany to fly into the fight when the Israelis turned the tide and won again.

In 1976, when an airliner with many Jews (and some Americans) aboard was rescued by Israeli commandos in Entebbe, Uganda, on the Fourth of July, most Americans rejoiced. They managed to project their military power to a distant African airstrip, apparently with the help (or at least acquiescence) of otherwise-hostile nations.

The Entebbe raid seemed like a bicentennial Independence Day gift to us. But some Americans started asking if Israel was getting to be too strong.

In 1981, Israel’s ability to protect itself was proven again when its air forces destroyed the Iraqi nuclear reactor at Osirak.

All of those events gave the false impression that Israel was no longer dependent on U.S. support.

That is the key breaking point for liberals: they just don’t care about allies whose every move we can’t control. Their view of allies such as Israel is positively Orwellian: weakness is strength. And it is entirely incorrect. Israel consults with us before it takes any major steps.

Flash forward to the Obama era. His hostility to Israel was profound. Despite Israel’s dependence on U.S. military aid, Obama refused much of what was needed and instead embraced the Arab nations regardless of their enmity toward Israel.

It was only by the actions of Israeli allies in Congress that Obama failed to reduce the military aid upon which it depends. Some revisionists claim that Obama was better for Israel than George W. Bush and that it was Bush, not Obama, that denied Israel the bunker-buster bombs it needed to threaten Iran and Syria. Precisely the opposite is true.

Netanyahu’s speeches at the UN and before a joint session of Congress were dramatic, factually correct, and devastating in their logic. Democrats have never forgiven Israel and Netanyahu for those events, by which he exposed the unnecessary dangers that would clearly result from Obama’s deal. They won’t forgive Israel at least as long as Netanyahu’s decade-long tenure in office lasts. And they’ll never forgive Trump for revoking the deal because they still believe it was one of Obama’s greatest achievements.

In 2015, only 47 percent of Americans still believed Israel was an ally. That dropped to 37 percent in 2018. By March of this year, according to a Gallup poll, 74 percent of Republicans had a favorable opinion of the Jewish state, while only 27 percent of Democrats did.

Some in the media have characterized Netanyahu as an “Israeli Republican,” tying him to Trump as tightly as they can. It’s easy to do.

When Trump tweeted that Israel should bar Reps. Omar and Tlaib from visiting, Netanyahu did exactly that. Israeli law provides that supporters of the “boycott, divestment, and sanctions” movement — which aims to end the Israeli state’s existence — can be barred from the country. Both Omar and Tlaib are BDS supporters and aimed to use their visits to support BDS, bash Israel, and support the Palestinians. Netanyahu’s action was both reasonable and lawful.

This is where Trump Derangement Syndrome kicks in. Jewish liberals hate Trump as much as any other liberals. Asking for their votes won’t hurt Trump but won’t help him either.

After the Omar-Tlaib incident, a Quinnipiac poll showed that only 27 percent of Democrats support Israel, while 26 percent support the Palestinians. Democrats have been moving away from support for Israel for years. It’s entirely possible that House Dems will try to reduce our aid to Israel next year.

Israel is continuing to fight its enemies — the same nations that are our enemies — to protect itself. The July 19 airstrike on Iranian militias in Iraq was the first attack Israel has mounted in Iraq since 1981. Those strikes not only protected Israel from incursions by those militias but also helped protect U.S. troops in Iraq from them.

For at least two years, Iran has been building bases in Syria and increasing its presence close to Israel. On Saturday, Israel struck Iranian drone positions in Syria, almost certainly preventing Iran from mounting a massive drone strike into Israel.

Trump’s failure to understand why liberal Jews won’t support him can hurt him next year if he continues making statements like he did last week. It’s not at all clear how Jewish voters who don’t give a damn about Israel can be reached. Maybe they can’t. They’re probably among those whom Bill Buckley called the “invincibly ignorant.”