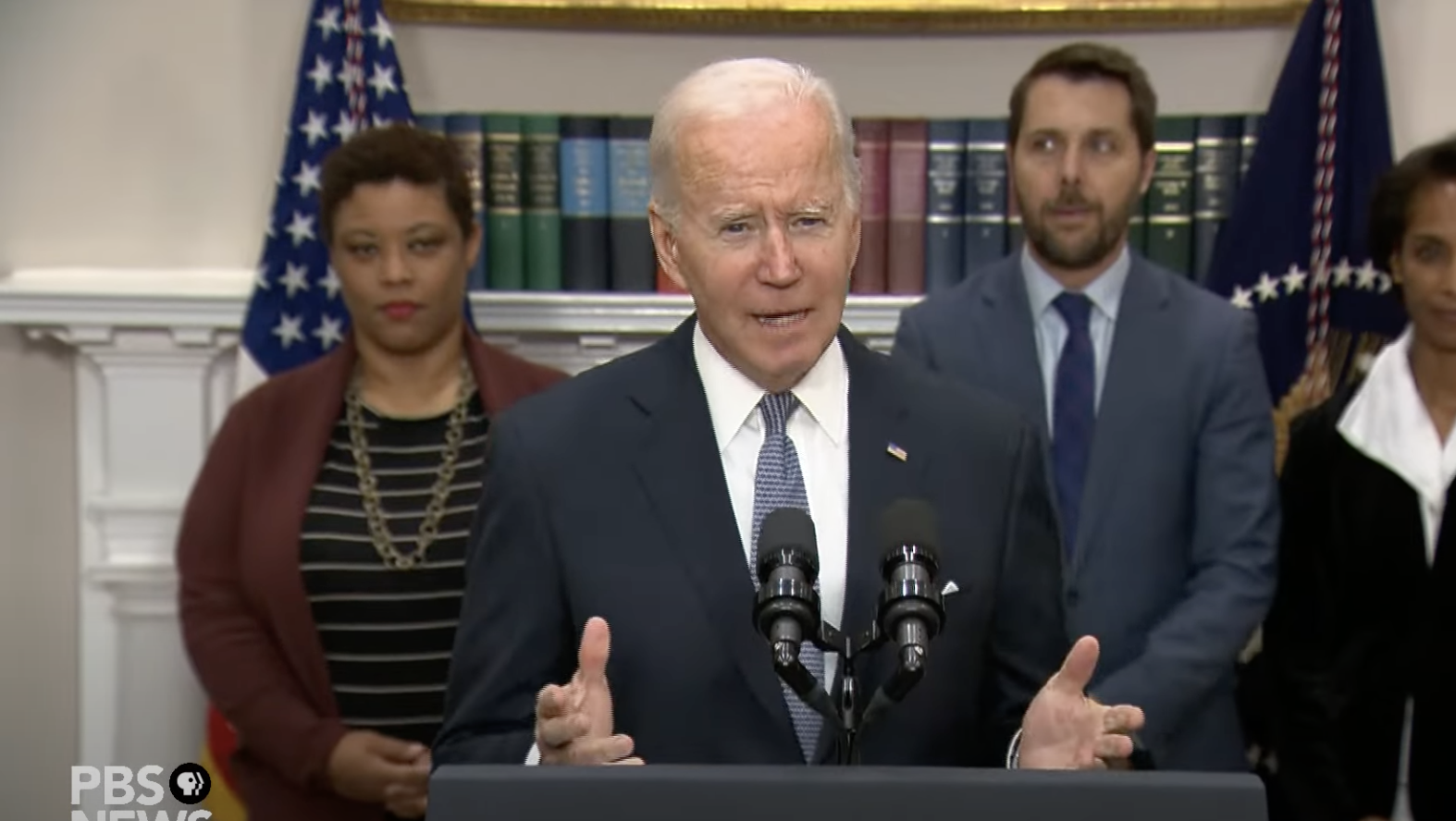 In a “late shift” in messaging for the midterm elections, Jacqui Heinrich of Fox News reported Monday, the Democrats are moving from “all-in” on abortion to “counterpunching the GOP on the economy.”

The Democrats are going to emphasize in their midterm campaigns the … economy?

Now, I’m no political strategist, and I’ve never been in a war room, unless you count the middle-school classrooms over which I presided as a schoolteacher in the 1980s, but I’d venture to say that Republicans are okay with that shift in strategy.

Let’s rehearse the numbers: The inflation rate is currently 8.2 percent but was 1.4 percent when Joe Biden took office. Gas now costs $3.76 a gallon but was $2.39 when Biden came in. Groceries are up 11.2 percent in the last year. Costs for households that heat with oil and gas are projected to rise by 27 and 28 percent, respectively. Rent is up, plane fare is up, hotel rates are up, all by double digits. The present economy is horrible, and the Democrats own the present economy.

And it’s not like nobody cares. According to a Pew Research report released October 20, 79 percent of Americans say the economy will be a very important issue in the midterm election:

The survey finds that inflation remains the dominant economic concern for Americans. In fact, the three top concerns, among seven items included, relate to prices — for food and consumer goods (73% are very concerned about this), gasoline and energy (69%) and the cost of housing (60%).

Democrat strategists admit that plumping the economy will be tricky. Writes Robert Kuttner in the American Prospect: “Even though Democrats have much to brag about … unalloyed bragging is the wrong message when most people are feeling lousy about their own economic condition. The right message is the Republican threat to worsen things, and the gains we can make with a Democratic Congress.”

The strategy seems to be to convince voters that the worst economy in 40 years would be a lot worse under Republican control, whereas two years ago, when Republicans were in control, the economy was a lot better.

When it comes to unalloyed bragging, Biden knows no other kind. He is now loudly touting his economic “successes”; namely, he claimed credit for lowering the deficit and creating 10 million new jobs. He said last Friday, “Today, my administration announced that this year the deficit fell by $1.4 trillion — the largest one-year drop in American history — $1.4 trillion decline in the deficit.” He also made a whopper of a job creation claim: “10 million jobs created — a record for any administration at this point in a presidency.”

But there are problems. First, the deficit drop was mostly due to the halt of COVID stimulus spending, the Congressional Budget Office said. Also, the Biden number doesn’t include the spending balloon the student loan forgiveness program will add to the deficit — $379 billion over three years, according to the Wall Street Journal.

Second, nobody outside of Washington, D.C., cares about deficit reduction. As for the “new” jobs: How “new” are jobs that are coming back after government killed them during COVID lockdowns?

Speaker of the House Nancy Pelosi, on CBS’s Face the Nation last Sunday morning, tried to deflect attention away from the one thing everybody equates economic troubles with, that is, inflation: “The fight is not about inflation. It’s about the cost of living. And if you look at what we have done, to bring down the cost of prescription drugs, to bring down the cost of energy and the rest in our legislation, you will see that that has been opposed every step of the way by the Republicans, and they have no plan for lowering the cost of living or helping with inflation.”

The strategy seems to be to convince voters that the worst economy in 40 years would be a lot worse under Republican control, whereas two years ago, when Republicans were in control, the economy was a lot better.

We’ll see how it plays, but Republican rebuttal to more esoteric economic arguments should be very simple: Look at the gas station marquees on every corner. Check the prices in the grocery store, at the meat counter or in produce or in dairy. Check your rent bill. Check your 401(k) and your money-market statements. Pay attention to your heating bills this autumn and winter.

If Republicans manage to lose the debate on the economy in these midterm elections, we need to get some new politicians.

The Democrat campaign shift to the economy comes amid a diversified counterattack wherein backslaps for putative successes mesh with Trump hate and MAGA fear and “threat to democracy” folderol, along with the traditional scarification of the populace over existential Republican threats to Medicare and Social Security (should we expect the granny-off-a-cliff ad this cycle? — there’s still time). Even more exotic strategies, such as placing their faith in the “split-ticket voter” to get them through, are luxuriating in their 15 minutes in the campaign sun.

But abortion’s failure to gain traction with voters has to hurt. Outrage over the Dobbs decision was intended to energize and mobilize a Democrat base sufficiently to negate, or at least cut into, or at the very least distract the electorate from attending to, strong Republican midterm emphases on inflation, crime, energy and food prices, and, to a lesser extent, the border — all disaster areas for the Democrats.

And, for a while, it looked to be working. The Democrats exceeded expectations in a number of special elections; they pushed through legislation that resonated with their base (a gun-safety bill and the Inflation Reduction Act); and voters in Kansas, red down to the roots of its sunflowers, convincingly defeated a pro-life attempt to remove abortion rights from the state constitution. Add in a summertime decline in gas prices, and it looked like the much-ballyhooed silver lining in the Dobbs decision might be real.

But Bidenomics kicked back in — pump prices up, stock market down — and the Dobbs effect seemed more mirage than campaign reality. Democrat campaigns around the country were realizing that abortion was not going to punch their ticket to election success.

In Nevada, for example, the Democrats had placed their chips for Catherine Cortez Masto’s Senate chances on negative reaction to Dobbs but have found that, in this working-class state, the boys and girls in the union halls were more interested in gas prices at $5.40, a higher-than-average unemployment rate, and a lower-than-average casino take due to economic hard times.

A New York Times/Siena College poll from last week showed that likely voters would pull the lever for a Republican over a Democrat by 49 to 45 percent, a five-point Republican improvement from a poll undertaken a month earlier, with the economy showing up as more important to voters than abortion. Remarkably, the poll showed a 32-point swing in independent women; they favored Democrats by 14 points in September; they now favor the GOP by 18.

James Carville, famous for his “it’s the economy, stupid” mantra, said this: “A lot of these consultants think if all we do is run abortion spots that will win for us. I don’t think so…. It’s a good issue. But if you just sit there and they’re pummeling you on crime and pummeling you on the cost of living, you’ve got to be more aggressive than just yelling abortion every other word.”

Indeed, abortion might not have been that potent of a campaign issue to begin with. When you go inside the numbers, you see that the Democrats’ unrelenting, inflexible, extreme position is a turn-off to a majority of voters. In one survey undertaken for the Republican National Committee in mid-September, while 54 percent of voters polled considered themselves “pro-choice,” only 15 percent supported the Democrat position of abortion at any time for any reason. Also considered extreme in this poll, however, was a pro-life position that did not accept abortion in cases of rape, incest, or protecting the life of the mother. Republican candidates who support banning abortion but with exceptions maintained a 22-percent advantage over the Democrat position of abortion at any time.

We’ll know in a little over a week whether the Democrat campaign tack toward the economy had any effect on the electorate.