In Print — Fall 2019,Top Story Betsy DeVos,GOP,Justin Amash,Michigan Amash’s Tea Party Comes to an End - The American Spectator | USA News and Politics
Menu
In Print — Fall 2019
Amash’s Tea Party Comes to an End
Unlike members of the Squad, he’s gone back to where he came from.
by Nic Rowan
Justin Amash speaking at the 2013 Liberty Political Action Conference (LPAC) in Chantilly, Virginia (Gage Skidmore/Wikimedia Commons) 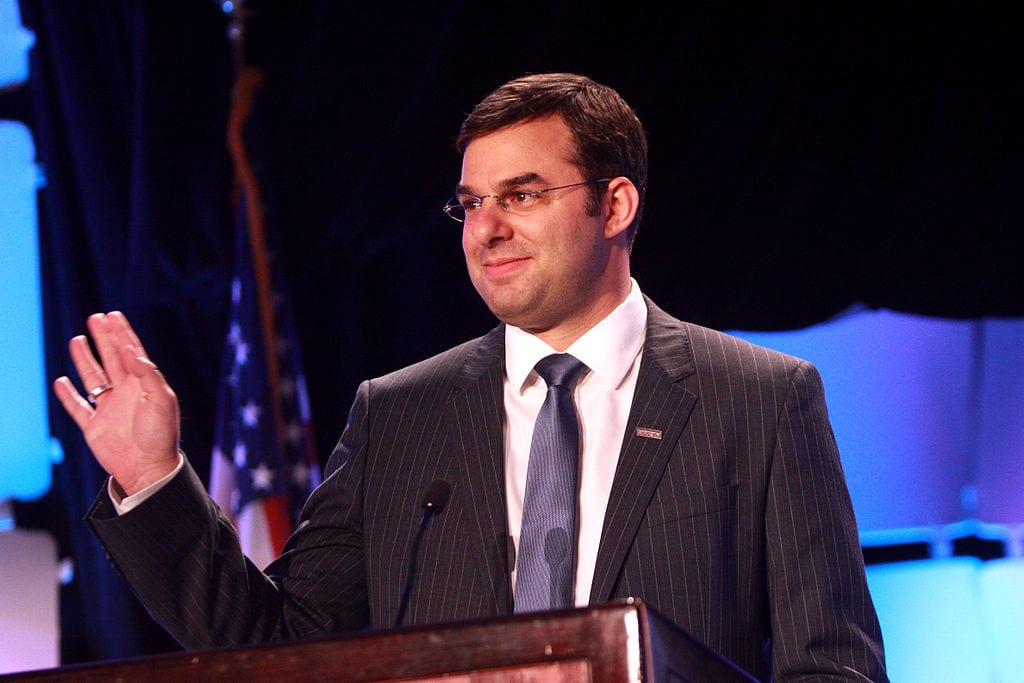 A week after Michigan Rep. Justin Amash declared independence from the Republican Party in a July 4 Washington Post op-ed, the GOP of his native Kent County officially condemned his exit.

“For some, this is a stunning revelation,” the Grand Rapids–based committee responded. “But for many of us, this announcement confirms what we’ve known for years: Congressman Amash does not share our Republican values.”

Amash says he left the party because he cannot abide a system dominated by President Donald Trump and Senate Majority Leader Mitch McConnell (R-Ky.). Even without Trump and McConnell, the Michigan congressman likely would have bowed out eventually. His alliance with the GOP was one of necessity, and — like so many other right-wing alliances forged in the Obama years — it was never destined to survive a Republican return to the presidency.

Up until his departure, Amash’s relationship with Republicans resembled the shaky alliance between the so-called “Squad” of freshman Reps. Alexandria Ocasio-Cortez (D-N.Y.), Ilhan Omar (D-Minn.), Rashida Tlaib (D-Mich.), and Ayanna Pressley (D-Mass.) and House Democratic leadership — necessary to resist the power of the president. Once Democrats regain control of the White House, the similarities will likely persist. Democratic leaders, already so annoyed by the Squad’s calls for socialism, could push them in the same direction Trump nudged Amash: out.

In fact, understanding the rise and fall of Amash may be a helpful way of predicting the future of the Squad. After all, both ran during wave years for their parties — and with minimal aid from their national wings. In the case of Ocasio-Cortez and Pressley, it was outright opposition: they won their seats in 2018 by ousting long-serving establishment incumbents in the primaries. And they continue to capture national attention because they embody the spirit of resistance to President Donald Trump that has been moving within the party since its dramatic loss in the 2016 presidential election.

Amash and his ilk captured the attention of the Republican Party much the same way in 2010. A crew of libertarians who had gorged their minds on the free-market, deficit-slashing writings of Friedrich Hayek and Frédéric Bastiat attacked the party from within, blaming the Great Recession on decades of runaway government spending, and flipped House control from Democrats to Republicans in the process. And though the deficit hawks behind this so-called Tea Party never took control of the House or the Senate, their voices were loud — and they harangued President Barack Obama so effectively — that GOP party leaders were forced to take their demands seriously.

Like the Squad in 2018, these congressmen did not rise through the normal party channels. Amash is a prime example. In his first run for political office in 2008, he took a seat in the Michigan State House, vowing to be a fiscally responsible congressman. This was before the Tea Party even existed: Rick Santelli had not yet delivered his famous 2009 rant on CNBC, and Glenn Beck was still bouncing around on CNN. But the seeds were there in people like Amash. Unlike many of his colleagues, he publicly vowed not to vote on a bill unless he had read it and became known statewide mostly for never missing a vote in his first term.

Amash also understood that his Facebook account could be a powerful tool for interacting with his constituents. Starting in 2008, Amash posted all of his notes from meetings, along with every vote, online. Amash stood for transparency and fiscal responsibility in a decade when his party nationally was fixated on a seemingly endless war.

By 2010, the country was ripe for the Tea Party. The economy was down the tubes, and the new Obama administration’s solution was to continue the Bush-era bailouts and pass the Affordable Care Act. Amash’s belief in less government interference in the economy — largely drawn from Hayek, whose portrait he hung in his office — became popular with the still-nascent movement.

Understanding the rise and fall of Amash may be a helpful way of predicting the future of the Squad.

Tea Party activists were organizing protests against government spending in every major city. Michigan was no exception. About 600 protesters rallied outside the state capitol in Lansing in February. Their demands were simple: no new taxes, no more corporate bailouts. Inside the building, Amash reiterated their demands before the state Legislature.

Only a few days later, Amash announced that he would primary Vern Ehlers, the sitting Republican congressman for Michigan’s 3rd District. Ehlers had held his seat since a special election in 1993 and was essentially a moderate Republican. He opposed abortion and same-sex marriage and wanted to lower taxes, in general. At the same time, he supported research on climate change and was one of the eight Republicans who voted in favor of the DREAM Act, which would have granted residency to people who enter the United States illegally as minors. Amash said Ehlers had lost touch with Grand Rapids.

“It’s important to have a person in Congress in touch with the community on a regular basis,” Amash told Politico in 2010. He offered himself as that person.

Rather than face a primary challenge, Ehlers chose to retire at the end of his term. The move opened a power vacuum in western Michigan, and Amash and four other Republicans moved on the seat. The same thing happened in other districts around the country: moderate Republicans retired rather than face primaries from younger (and often feisty) fiscal conservatives. Trey Gowdy replaced Bob Inglis in South Carolina. Joe Walsh cleared out a field of Republicans in Illinois with no help from the party. And Amash set himself up for Michigan. The Republican wave began as an internal affair.

Even with the national groundswell of fiscal conservatives, Amash faced a tough primary because of the local Republican machine. Nevertheless, the deep-pocketed Dick and Betsy DeVos (formerly the GOP state party chairwoman) threw support behind him days after Ehlers announced his retirement. And while fighting for acceptance from the local party, Amash scored an endorsement from the erstwhile presidential candidate Ron Paul in June. Glenn Beck praised Amash on his Fox News show, to much fanfare. The political action committees FreedomWorks and Growth PAC got behind him.

Back home in the 3rd District, resistance was high. The same day Paul endorsed Amash, Ehlers got behind former Kent County Commissioner Steve Heacock, a moderate whom Ehlers had personally asked to run and touted as the “better choice” for local Republicans.

Amash immediately launched his attack. The messaging on Heacock’s campaign website was markedly similar to that of Reps. Dave Camp (R-Mich.), Paul Ryan (R-Wis.), and McConnell. Amash called foul. “Anyone who lifts and takes credit for the words and proposals of others lacks credibility,” he said in a statement. Heacock apologized — but the incident stuck.

Once Amash won the primary, Ehlers’ two daughters opened their own offensive against the upstart politician and endorsed his Democratic opponent, Patrick Miles. The move forced Ehlers to criticize his daughters in the press. “I think it’s foolish not to support a Republican if this is the year they take over,” he said.

And it was. Amash defeated Miles despite the Democrat’s aid from dozens of prominent district Republicans. Once in office, Amash stuck to his promise: he opposed federal spending increases in all cases.

At the same time, Amash veered his leadership of the district away from its historically socially conservative bent. He voted against defunding Planned Parenthood in 2011 and supported same-sex marriage on the ground that the government, not gay people, poses the greatest threat to society. These issues, he argued, had little to do with debt or runaway spending, the primary concerns of a principled representative.

Those views don’t play well anymore, and the Republican Party has little use for people like Amash. Fiscal responsibility has been out of fashion since at least 2016, best evidenced by the fact that Trump was able to campaign successfully on the promise that he would not seek to curtail Medicare benefits. And the death knell for the Tea Party came in late July, when Sen. Rand Paul (R-Ky.) declared its passing on the Senate floor with the monstrously huge, Republican-approved budget.

True believers in the Tea Party should have seen this coming. After all, calls for responsibility and accountability are often just the scoldings of a party in opposition. No Republican-led U.S. government since at least since World War II has ever seriously bothered with cutting the budget or paying off the country’s massive debts. Not the party of Reagan, not the party of Bush, and certainly not the party of Trump. To think otherwise is to be an ideologue, like Amash — or Walsh, who in August announced a primary challenge to Trump. The principles the Tea Party espoused were an attractive pose for the party, for a time.

Likewise, Ocasio-Cortez and her ilk are making a lot of noise right now, but it’s unlikely their Green New Deal and vocal support for universal health care will play well in a Democratic White House. Proposals like these are made to keep the party’s political base energized — rather like fiscal responsibility and abortion for Republicans — but to actually deliver on them would be disastrous. For a party in power, staying in power is the main objective — and neither Democratic nor Republican leadership will ever gamble on a few principled loudmouths.

If the Squad doesn’t like that, expect another July 4 declaration. But unlike Amash, it won’t be such a stunning revelation.