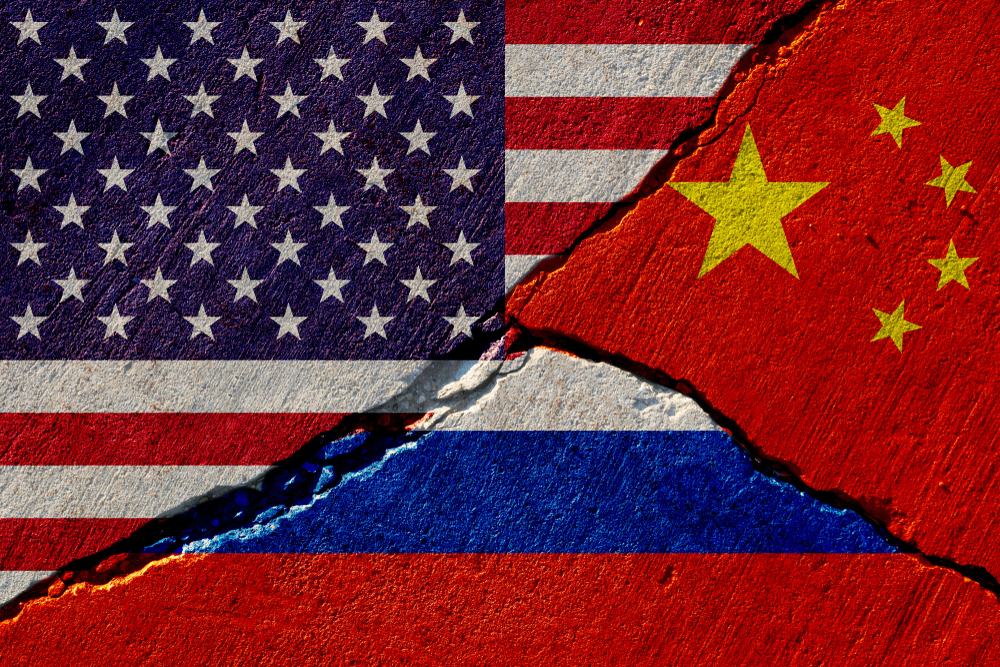 The Washington Post columnist George Will surveys recent world events and proclaims that the “correlation of world forces” has shifted substantially against Russia and China. He attributes this shift to Russia’s invasion of Ukraine — which he calls a “spectacular geostrategic blunder” comparable to Napoleon’s invasion of Russia in 1812 and Hitler’s invasion of the Soviet Union in 1941 — and China’s aggressive behavior in the South China Sea. Russia’s blunder caused the NATO alliance to further expand with the additions of Finland and Sweden, while China’s repeated military incursions near Taiwan caused Japan to significantly bolster its defense capabilities. But what is also happening is that the principal world powers are dividing into two antagonistic blocs eerily reminiscent of the lead-up to the First World War.

World events in 2022 have pushed China and Russia closer together than any time since the founding of the Sino-Soviet bloc in 1950. Mao Zedong’s victory in China in October 1949 and his signing of a mutual security pact with Soviet Russia on Feb. 14, 1950 — and the subsequent Korean War in which China and Russia supported, supplied, and fought with our North Korean enemy — resulted in the adoption by the United States of NSC-68 — the classified national security blueprint that put meat on the bones of the containment doctrine that the State Department’s Policy Planning Director George F. Kennan explained in his famous “X” article in Foreign Affairs in 1947. And NSC-68 had its origins in the geopolitical writings of Britain’s Sir Halford Mackinder and America’s Nicholas Spykman, who separately warned that the democracies needed to ensure the geopolitical pluralism of Eurasia.

The United States fought two “hot wars” — in Korea and Vietnam — against communist regimes supported by the Sino-Soviet bloc. We tied in Korea and lost in Vietnam thanks, in part, to Soviet and Chinese assistance to our enemies. Fortunately, the emerging Sino-Soviet split widened in the late 1960s to the point where their respective armies clashed near the Ussuri River in 1969. President Richard Nixon took geopolitical advantage of that development to forge the opening to China while simultaneously pursuing detente with the Soviet Union, further driving a wedge between the two Eurasian communist giants. Every administration after Nixon’s recognized the wisdom of preventing a reconciliation between Soviet Russia and China during the endgame of the Cold War.

Since 1993, U.S. foreign policy has, wittingly or unwittingly, worked in the opposite direction — financially fueling China’s rise while antagonizing a defeated Russia by repeatedly expanding NATO eastward. It was our “unipolar moment” when the hubris of our policymakers talked about “new world orders” and “peace dividends.” Geopolitics was seemingly replaced by geoeconomics. Distracted by the endless wars in Afghanistan and Iraq and the Global War on Terror, we took our eye off the ball of global geopolitics. And we based our approach to China’s rise on the mistaken belief that China’s market reforms would lead to political liberalization and China’s acceptance of a U.S.-led world order. China instead, first quietly then overtly, pursued what President Xi Jinping calls his “China Dream” — China replacing the United States as the leader of the global order.

More than a hundred years ago, Mackinder warned that control of Eurasia by an alliance of hostile great powers could lead to a world empire. Eighty years ago, Spykman warned U.S. policymakers to focus on maintaining the geopolitical pluralism of Eurasia upon which their security depended. Today, George Will sees the strengthening of the strategic partnership of China and Russia as a shift in the “correlation of world forces” in the democracies’ favor. He must have skipped his Geopolitics class.

George Kennan understood geopolitics. He warned in 1997 that expanding NATO would lead to a revival of a militaristic and imperialistic Russia. He also understood and wrote about the events that led to the outbreak of the First World War, which he rightly called the “seminal catastrophe” of the 20th century. The events of 2022 that George Will sees as hopeful and positive — the forming of great power hostile alliances, war in Eastern Europe, crises in the South China Seas — echo the tragic sequence of events that led to World War I. History does not repeat, but it does rhyme, and, contrary to George Will’s sanguine observations, the rhyme of today’s events is frightening.