Loose Canons,Top Story Gen. John Kelly,George W. Bush,James Mattis,President Trump There’s No ‘Generals’ Revolt’ Against Trump - The American Spectator | USA News and Politics
Menu
Loose Canons
There’s No ‘Generals’ Revolt’ Against Trump
It was once a point of honor with Gen. James Mattis not to criticize the president publicly. That was then.
by Jed Babbin
Trump at Arlington National Cemetery, Memorial Day 2018 (Wikimedia Commons) 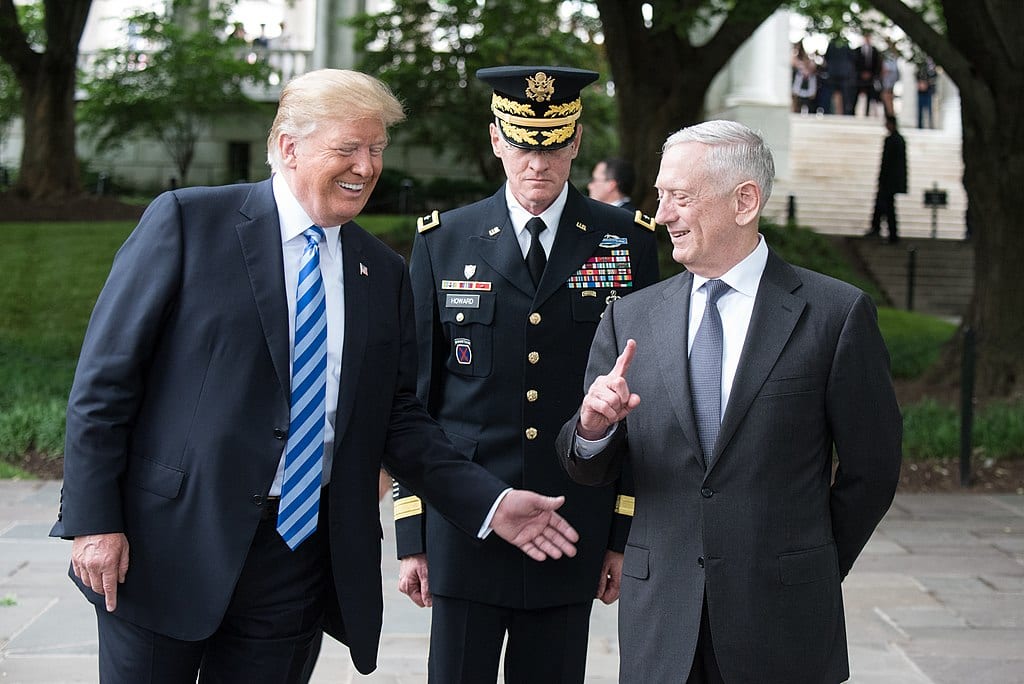 By last Monday, the riots and protests over the death of George Floyd at the hands of Minneapolis police had spread to over 100 American cities. On that day, President Trump gave a short speech in which he castigated the governors and mayors who hadn’t put down the riots. He said that he might invoke the Insurrection Act and put federal troops into rioting cities to quell the violence.

That evening, Trump walked to St. John’s Episcopal Church across Pennsylvania Avenue from the White House, with Defense Secretary Mark Esper and a camo-clad Gen. Mark Milley, Chairman of the Joint Chiefs of Staff, in tow.

Those events so incensed former Defense Secretary Gen. James Mattis that he released a statement to the liberal Atlantic magazine severely criticizing the president. It was a recitation of long-held complaints.

The 2006 “revolt” was a purely political exercise. The statements by Mattis and Kelly, while personal, are intended to have a political effect.

At the heart of Mattis’s condemnation of Trump was this paragraph:

Donald Trump is the first president in my lifetime who does not try to unite the American people — does not even pretend to try. Instead he tries to divide us. We are witnessing the consequences of three years of this deliberate effort. We are witnessing the consequences of three years without mature leadership. We can unite without him, drawing on the strengths inherent in our civil society. This will not be easy, as the past few days have shown, but we owe it to our fellow citizens; to past generations that bled to defend our promise; and to our children.

The media are — falsely — characterizing the Mattis and Kelly statements as proof that Trump isn’t and can’t be trusted even by his closest advisers and that there is a breakdown of trust between Trump and the military. They tried the same thing in the 2006 “generals’ revolt” against George W. Bush and Donald Rumsfeld.

In April 2006, six retired generals protested the handling of the Iraq and Afghanistan wars by then-President George W. Bush and then-Defense Secretary Donald Rumsfeld. They claimed that they didn’t coordinate their attacks on Bush and Rumsfeld, which is probably true. That coordination apparently was accomplished by Washington Post reporter Thomas Ricks while writing his book, Fiasco: The American Military Adventure in Iraq, which was published at the same time the “revolt” came to light.

As I wrote in July 2006, the “generals’ revolt” was a compendium of complaints by retired officers who had the duty to make them known to Bush and Rumsfeld when they were on active service and hadn’t done so.

As I wrote then, the generals who were part of the “revolt” had all gained high rank under the Clinton administration and had some vestigial loyalty to Clinton’s agenda. In this case, we have to remember that Mattis and Kelly achieved high rank under the Obama administration. It’s hard to believe that they, as combat Marines, had any loyalty to Obama’s way of thinking, but that idea cannot be entirely discounted.

The 2006 “revolt” was a purely political exercise. The statements by Mattis and Kelly, while personal, are intended to have a political effect.

Mattis resigned from the defense secretary post in 2018 after his disagreement with Trump over Trump’s plan to suddenly withdraw all U.S. troops from Syria. After his resignation Mattis was frequently asked about his dealings with Trump but kept a respectful silence. He said then that criticizing a president while he was still in office was improper.

Both Mattis and Kelly knew Trump well by the time they resigned their posts. Mattis’s criticism of Trump — which Kelly signed on to — is intensely personal.

The statements by Mattis and Kelly came out at roughly the same time as a statement by Defense Secretary Mark Esper.

Esper rebutted President Trump’s idea to invoke the Insurrection Act to use federal troops to put down the riots engulfing so many American cities. Esper said that could be done in a last resort but that we hadn’t reached that stage.

Esper, in asking governors to put down the riots, used the phrase “to dominate the battlespace” as if Americans were engaged in another Civil War. The media quickly jumped on him and Trump for thinking in those terms. Esper apologized.

Though the media lumped Mattis, Kelly, and Esper together, nothing Esper said supported the comments by Mattis and Kelly.

The relationship between a president and our military has to be based on trust and respect. From the highest to the lowest rank, a soldier has to believe that a president will spend his life if he has to, but won’t waste it. Especially at the higher ranks, the bonds of trust and respect are sometimes broken.

While the Mattis and Kelly statements show that Trump’s relationship with some of the professional military is strained, nothing indicates that it is broken as the media would have us believe. Throughout our history that bond has often been strained and sometimes broken.

During the Civil War, President Lincoln had enormous difficulty with his generals. At the beginning of the war, the most famous Union general was George McClellan, who loved command, but wouldn’t fight. McClellan wrote to his wife that Lincoln was nothing more than “a well-meaning baboon.” Lincoln had to fire McClellan (twice) and several other commanding generals before he found a general who could fight and win — Ulysses S. Grant.

Harry Truman fired Gen. Douglas MacArthur for refusing to obey presidential orders during the Korean War. Barack Obama fired Stanley McChrystal for remarks he and his staff made in a Rolling Stone article.

Generals’ resignations on matters of principle are all too rare. Between 1996 and 2018, the only general to resign on principle was Air Force Chief of Staff Ron Fogelman. In 1996, the Khobar Towers bombing by al-Qaida left 19 American troops dead and almost 500 injured. Then–Air Force Secretary Sheila Widnall ordered Fogelman to punish senior Air Force officers for their failure to protect the troops living in Khobar Towers. Fogelman, believing them to be innocent, refused and resigned.

Mattis could have, and did, do the honorable thing by resigning rather than carrying out Trump’s order to withdraw abruptly from Syria. He, and Kelly, performed honorably by refusing to criticize Trump while he was still in office. Mattis gave no indication of why he reached a decision to break with that sense of honor last week.

Mattis’s severe criticism of Trump, joined in by Kelly, does not mean that Trump has lost the respect of the military. Statements by two generals cannot and should not be imputed to the rest of the professional military.  But it does mean that Mattis has crossed a line he had honorably drawn for himself.

Mattis’s statement and Kelly’s agreement won’t disappear amidst the presidential campaign. The media will ensure that. The only question is whether or not Mattis and Kelly will allow their personal dislike for Trump to be used in Biden’s campaign against him.