Loose Canons,Top Story COVID-19,COVID-19 Vaccine,John Roberts The COVID-19 Election - The American Spectator | USA News and Politics
Menu
Loose Canons
The COVID-19 Election
The cynical demagogy of Biden–Harris is of a piece with a Democrat effort to say and do whatever it takes to steal the election.
by Jed Babbin
Aaron of L.A. Photography/Shutterstock.com 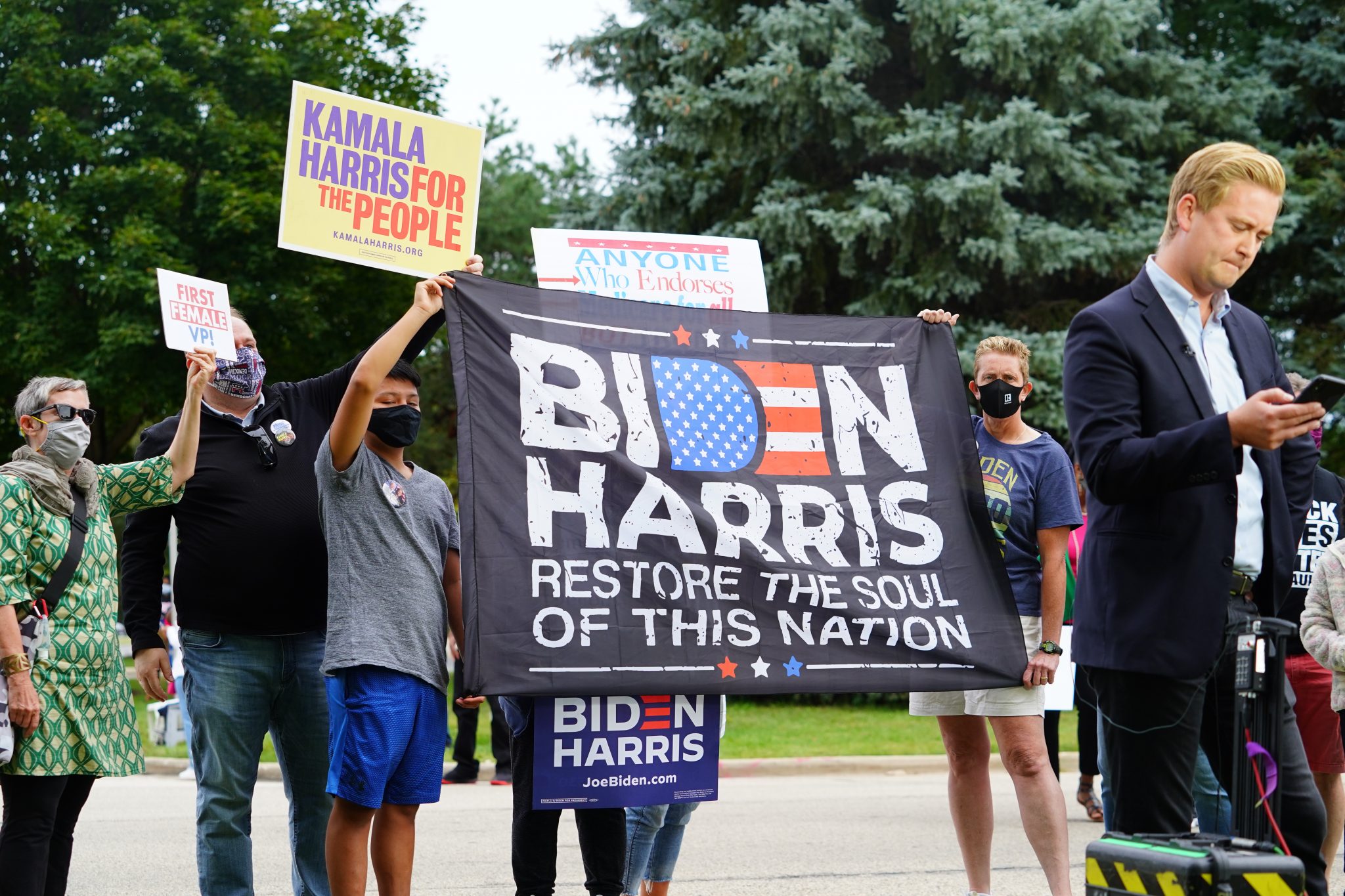 Three elections ago — all the way back in 2008 — Joe Biden talked a lot about “kitchen table issues,” the questions that faced American families that were so important that they talked about them around the kitchen table. They are the questions, Biden told us, that decide presidential elections.

The 2020 election presents us with the mother of all kitchen table issues, the Covid-19 pandemic, because it directly affects everyone’s lives. How much danger do we have of getting the disease or even dying from it? Does dad or mom — or both — still have a job? If not, how can we pay our bills? The virus is about ninety nanometers in size, which is about four millionths of an inch and even the best N95 masks filter out particles that are about a thousand times larger and only provide a measure of protection. Regular cloth and paper masks don’t provide any protection, so why wear them? When will we be able to get a vaccine that can protect us against the virus?

What Biden and Harris are saying is that any vaccine produced under the Trump administration is not trustworthy. Saying that is disgustingly irresponsible because it may dissuade many people from getting the vaccination.

There have been over 200,000 American deaths related to COVID-19. Last week Biden said that all of those people would be alive if Trump had done his job. That’s utter nonsense.

Let’s look closely at what Trump has actually done — which Biden criticizes so harshly — and what Biden promises he would do if he is elected.

On January 31, Trump banned foreign nationals from entering the U.S. if they had visited China 14 days prior to their arrival. He also imposed a mandatory 14-day quarantine on U.S. citizens returning from China’s Hubei province, where the virus originated.

Responding to Trump’s travel restrictions, Biden said, “You know, we have right now a crisis with the coronavirus, emanating from China.” He added, “The American people need to have a president who they can trust what he says about it.… This is no time for Donald Trump’s record of hysterical xenophobia and fear-mongering to lead the way instead of science.”

Because it became politically expedient to do so, Biden flip-flopped on travel bans. In April, his campaign said that he supports travel bans “that are guided by medical experts, advocated by public health officials, and backed by a full strategy.”

Biden has said that he’d make the wearing of masks mandatory on federal property and enforce the requirement with fines.

What all that means is Biden will do what the “experts” tell him to do. Biden’s deference to the “experts” goes much further than masks and travel bans.

In August, Biden was asked if he would shut the American economy down again to head off a new wave of COVID-19 infections. He replied, “I would shut it down. I would listen to the scientists.” Which scientists? Which experts? The ones who tell him what he wants to hear, of course.

No president has the power to shut down the economy. Trump supported — but didn’t order — a two-week shutdown in March that was extended to six weeks. The economic damage was devastating. Most states began reopening their economies in late April. By then, 30 million Americans were unemployed.

Trump, in contrast, is very unlikely to even try to shut the economy down again. According to economic adviser Larry Kudlow, “The president is absolutely disinclined to shut down the economy, as is the vice president. You know, I think shutting down the economy could be worse for our health than not shutting it down.”

Kudlow is exactly right. Very few nations that are suffering a second wave of COVID-19 infections are closing down their economies a second time. France and Spain are trying localized lockdowns instead of closing their economies. Germany’s health officials are saying that their lockdown this spring should have been more limited. (Only Israel is going back into a full lockdown.)

Trump initiated “Operation Warp Speed” to develop a vaccine for the virus by the end of the year. The administration is working hard with several pharmaceutical companies here and in Europe to develop one that quickly, and they may succeed. Normally, it would take almost a decade to develop and test a vaccine against such a complex disease.

However quickly Trump’s efforts succeed — and they will, before or shortly after the election — they will set a record for speed. What is Biden doing?

Both Biden and his running mate, Kamala Harris, have been telling people they should distrust any Trump-generated vaccine. Late last week, Biden told a CNN interviewer, “The idea that there’s going to be a vaccine and everything’s gonna be fine tomorrow — it’s just not rational.” Commenting on Trump’s comments that he downplayed the risk of the disease to avoid a panic, Biden said Trump’s conduct was close to criminal.

What Biden and Harris are saying is that any vaccine produced under the Trump administration is not trustworthy. Saying that is disgustingly irresponsible because it may dissuade many people from getting the vaccination.

Biden and Harris have turned the vaccine into a political issue. They want to mislead people into believing that the Trump administration is producing a vaccine and Trump shouldn’t be trusted to do so. But it’s the pharmaceutical companies that are producing them and those companies have to satisfy the FDA as to safety and efficacy of every vaccine before it can be made available to the public.

They, and their Democratic Party, are pushing for mail-in ballots because of the supposed danger of voting in person. To them, it’s fine to riot and loot stores in person, but voting in person is too dangerous.

The Democrats want to keep counting ballots until enough are tallied to elect Biden.

What this boils down to is that unless one candidate wins by a landslide, Democrats will be able to drag out the ballot-counting for weeks or months with lawsuits, protests, and, in all probability, riots in several cities and states. Preventing Trump’s reelection is their only goal, and they are willing to destroy the credibility of the elective process to do it.

That’s what the COVID-19 Election is all about.

The Friday death of Supreme Court Justice Ruth Bader Ginsburg could have an enormous effect on the election. Trump plans to nominate a new Supreme Court justice this week, and Senate Majority Leader Mitch McConnell says a floor vote will be held, but it’s entirely unclear how he can get that done. The Democrats will filibuster a floor vote, and — unless McConnell is willing to do away with the filibuster — a floor vote won’t happen. Another vicious Democrat performance at a confirmation hearing, like the one for Justice Kavanaugh, could substantially help Trump get reelected.

Meanwhile, both sides are hiring gaggles of lawyers to fight the inevitable lawsuits over the validity of the election. When those inevitable reach the Supreme Court — and they will — they could result in a 4-4 vote, which would leave us in the worst constitutional crisis in our history. Or Chief Justice Roberts could side with the liberals in a 5-3 decision that would make Biden president.

This is how nations fail. Freedom to choose our governments in free and fair elections is the key to our constitutional system of government. If we lose that freedom, the American experiment in democracy will fail and be thrown on the ash heap of history.

Walking out of the Constitutional Convention in 1787, Benjamin Franklin was supposedly asked whether the government the Convention created for America was a republic or a monarchy. His answer was reputed to be, “A republic, if you can keep it.” We can’t keep it if we can’t run a free and fair election this year.