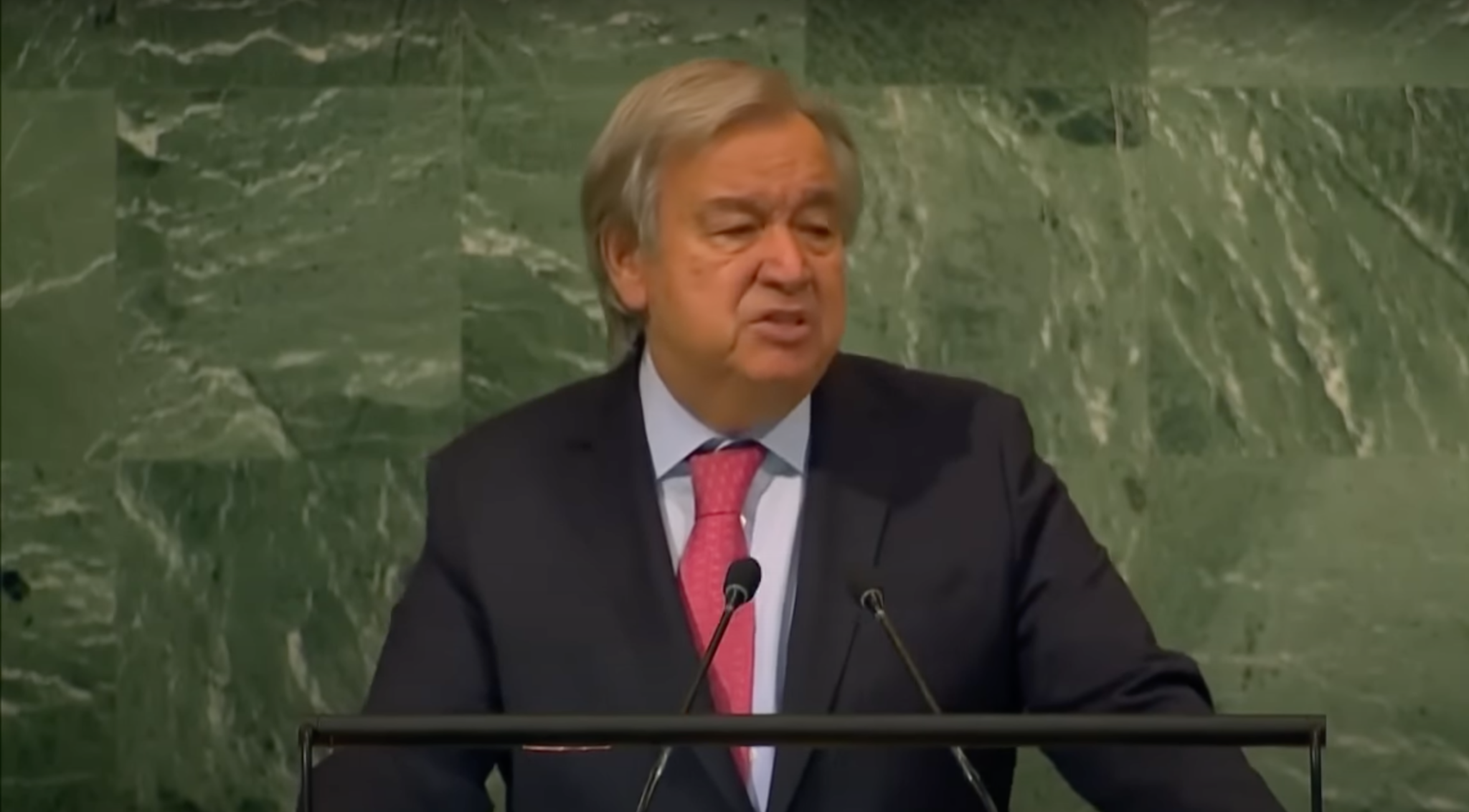 Somebody please shut down the UN. It stinks and the stench is seeping all over the planet. I don’t think there is anything that pollutes more than that stupid organization, which brings nothing but trouble and spreads nothing but its antics. If ever it is really needed, like when the pandemic hit, all it does is back up communist China, which is not exactly the best way to ensure world peace and friendship. Let’s be clear: This is not the 20th century, there is no world war on the horizon — except for one caused by an angry ex-girlfriend — and even the queen of England is dead, yet there is still a herd of dinosaurs howling inside the UN headquarters. We all remember why the organization was founded, but talking about World War II today sounds about as up to date as using whiskey to anesthetize a patient in the operating theater.

António Guterres, Portuguese socialist and UN secretary-general, a gentleman who once held a certain prestige that was probably unjustified, has become a vulgar scarecrow. A man living in panic. I don’t know if you have ever spent time with someone like that. I’m scared of those who fear cars, who sit in the passenger seat and keep shouting “Brake!,” “We’re going to crash!,” and “Oh my God, we almost got killed!,” even if you’re driving at the speed at which inflation is going down in the United States. The fearful co-driver makes you feel uncomfortable and announces so many misfortunes that, in the end, no matter how prudent and experienced a driver you are, it would be strange if you didn’t end up ramming your car into a tree, if only to get that person to shut up. And if that happens, you know exactly what your co-driver is going to say: “I TOLD YOU SO!” My advice is to eject the misfortunate individual out the window upon the second panicked exclamation.

Also dangerous are those fearful friends with whom you venture out into the countryside at dusk for a walk, only for them to begin to announce monstrous shapes amongst the dark silhouettes of the trees, to hear terrible animals clicking, and even to think they see the signs of a bloody Martian invasion in the sky. That kind of company makes you end up nervous too because they’re such squeamish types that they need to spread their hysteria to reaffirm themselves. The solution to fearful friends in the woods is to leave them tied to a tree overnight. I don’t think they’ll get eaten by any wild animals, and the shock therapy is likely to make them grow a pair for next time.

Guterres acts in political life like that fearful friend who is unable to keep his panic to himself. Yesterday at the UN General Assembly, I had to rub my eyes to confirm that it was the secretary-general who was giving the speech and not activist Greta Thunberg, inebriated and wearing a suit and tie. Big trouble! There is no turning back! Now or never! The cataclysm is imminent! But let’s see … What is wrong with this gentleman? Can someone please prescribe him a handful of anxiolytics for breakfast?

“Our world is in big trouble,” he said, and thus he began to reassure us all, adding that the international community is “gridlocked in colossal global dysfunction,” then mentioning a salad of humanitarian catastrophes, insecurity, and political crisis that he seemed to be able to recite backwards, forwards, and with his eyes closed. I can imagine him walking past his wife at breakfast time, dipping toast into a drink with huge dark circles under his eyes, and responding to her “good morning, honey” with a “my love, today we are going to die in a particularly gruesome and grisly way.”

There is in my country a famous journalist, already retired, rich, and with no big problems in life, of whom friends comment mischievously that his favorite hobby is attending wakes and funerals. I had never believed such gossip until I met him at the funeral of an acquaintance of mine, crying his eyes out, and giving big hugs to the widow, whom I had never met before. According to my investigations in the vicinity of the coffin, he did not know the deceased either. Some people are just addicted to drama. I guess that’s what’s up with Guterres.

But the truth is that we are not on the brink of a cataclysm, the atmosphere is not going to explode, there is no imminent drought that will wipe out all human life, and there is no world war going on. And, if you pay attention, you will realize that the only thing wrong with us — and this is catastrophic — is that we are ruled by idiots. If we could get the idiots out of government in Western nations, then the climate change soufflé might be deflated; we could produce energy without having to buy it from Russian President Vladimir Putin or to pay for it at the price of gold, bloated by environmentalist regulations; inflation could be reduced and employment could grow; we could lower those sickening socialist taxes; we could get involved only in the political conflicts of our allies and only when they ask us to; and, in general, we could go through an unforgettable era of peace and prosperity.

So Guterres is partly right. Yes, we are in serious trouble. And those problems are called Guterres, Biden, Macron, Scholz, López Obrador, Maduro, Putin, Petro, Sánchez, Trudeau, and a few others.