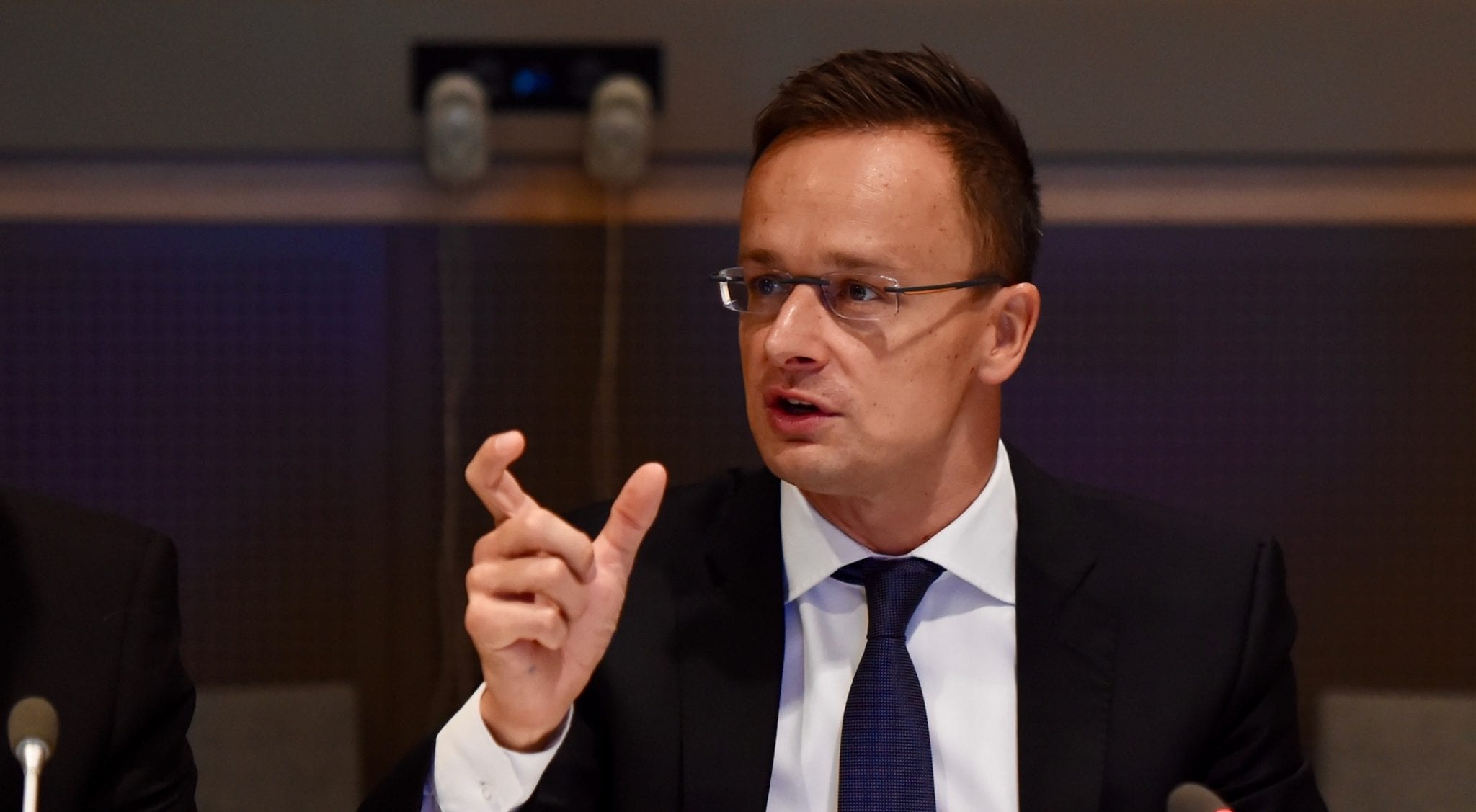 Trending
AOC Hit List Targets Two Dozen Democrats
by David Catron
The Stain of Theodore McCarrick Is Impossible to Expunge
by George Neumayr
Misguided Youth Protesters Have It Wrong — the World Is Actually Getting Better and Better
by H. Sterling Burnett
Sign Up to receive Our Latest Updates!
Register
Hot Off
The Press
Hither and Yon
Five Quick Things
by Scott McKay
The Nation’s Pulse
Martin Luther King and I
by Jeremy Lott

Hungary’s Minister of Foreign Affairs and Trade, Péter Szijjártó (See-YAR-toe), was at the United Nations last month for the opening of the UN General Assembly.

He offered The American Spectator an exclusive interview on the European Union’s “revenge” against Hungary for protecting its national borders, his frustration with “hypocritical” organizations like the UN that have failed to forestall the destruction of Christian communities in the Middle East, and his faith in a resurgent Central Europe to push-back against the European Union’s “post-national, post-Christian” agenda.

Szijjártó is a political Wunderkind. Named to head the key ministry at age 35, four years ago. He won a seat in the National Assembly in 2002 as a member of Prime Minister Viktor Orban’s Fidesz party, a post he still holds. His career began on the Gyor municipal council, as a 20 year old, not yet out of college.

Tensions peaked in summer 2015 when economic migrants swarmed Western Europe from the Middle East, Africa, and South Asia. Hungary resisted the incursion, first by blocking entry then by building barriers. It also declined to accept a Brussels-assigned quota of migrants. In response, the European Union sued Hungary (as well as Poland and Czech Republic) and threatened other sanctions.

Last month, the European Parliament approved the Sargentini report (drafted by a Dutch Green Party member) accusing the Orban government of being a “systematic threat” to EU principles. Criticism ranged from its purported “degrading” treatment of migrants to its “patriarchal” attitude toward women. Orban called the analysis a “Soros report,” referencing the billionaire’s ideology which is resented by his homeland.

Meanwhile, ties with Russia have grown closer; PM Orban had a working visit to Moscow three weeks ago. The two countries have key trade agreements and are collaborating to aid Christians returning to their homes in Iraq and Syria — a commitment Brussels refuses to embrace.

Hungary is also part of a strong regional alliance, the “Visegrad Four,” comprised of Czech Republic, Poland, and Slovakia, countries expected to defend Hungary if the EU tries to sanction this proud nation. Lithuania and Bulgaria announced support for Hungary against the pressure tactics from Brussels too.

The 2019 European Parliamentarian elections promise to be a significant ideological battle: Sovereignty and Christian values versus the Soros-Brussels agenda.

From my interview with Péter Szijjártó:

Q: The Hungarian Government continues to clash with the European Union. What is the source of this tension?

A: In the Summer of 2015, 400,000 illegal migrants marched through our country because the European Union decided in favor of a very false migration policy. The EU, Brussels itself, would like to change the composition of the European population without any democratic legitimization by the European people.

The migration policy being carried out by the EU is totally against the will of the European people, with no legitimacy behind it. Only the Hungarians, ourselves, are authorized to make decisions about the future of the country, about the composition of the country.

That’s why we decided to build a fence and say no illegal migrants will be able to come to the territory of Hungary. The only way to enter the territory is the legal way. These 400,000 people violated our border. They disrespected our rules, our way of life. They occupied public areas and we don’t want to see such phenomena repeated.

Q: The Sargentini Report, approved by the European Parliament last month, criticizes everything from your judicial independence to immigration policy to electoral law. What motivates this full frontal assault against the Government of Hungary?

A: It’s revenge by the European Union on the Hungarian government for two reasons. First, Hungary made it very clear: Europe must protect its borders. We need to regain our ability to decide, who we allow to come to Europe and who we do not allow to come. We have proven, with very strict, costly measures that it is possible to protect ourselves and it is possible, legally and physically, to stop the migratory flows on the land route.

We will always keep Hungary as a country of the Hungarians. We will keep it as a Christian country as it has been for 1,000 years.

So these two together, centering on very fundamental debates, made the European Union take revenge on Hungary. Also, they cheated. They cheated because the European treaty says very clearly that when there is a vote in parliament, the no votes and abstentions must be calculated together against the yes votes, but they made a procedural rule [on the Sargentini motion] that left out from the tally the abstention votes. That’s how they could push through this report.

Q: French President Macron said Hungary should be ejected from the Schengen Area of passport-free travel for not towing the EU line. Is Hungary ready, in order to preserve its identity, to go to a Plan B and exit the Europe Union?

A: No. No way. Hungary can only be strong in a strong European Union so there is no thinking about exiting the EU. Full stop.

We will remain in the European Union and we will fight for a better European Union. We will fight for reforms. What President Macron put forward is, simply, blackmail because it does not depend on him, nor on any EU commissioner, whether we are part of the Schengen Area. There are clear rules and regulations, and criteria that we meet, 100%.

Q: What budget does Hungary receive from the EU and what amount do you “pay in”? I understand you receive about five times as much funding as you contribute, but EU funds have decreased, for whatever reason, since 2014 — from 6.6 billion Euros to 4.0 billion Euros.

A: We are net receivers, so we receive more, but I have to tell you one thing: There is no free lunch when it comes to European funding. When we joined the European Union, we opened up our market and because we were just out of Communism, Hungary had no real accumulated national capital. Western companies gained all the market shares and had enormous profit, which is not a problem because I’m not a Communist so I do not envy profit.

Q: The Obama Administration supported many polices opposed to Christian values. Have you noticed a change under the Trump Administration in the kind of policies it is advancing around the world?

A: We are very happy with the endeavors of the current administration. We had a terrible political relationship with the Obama Administration. They made a series of attempts to interfere in the domestic affairs of Hungary, which we found unacceptable.

These interventions have been deleted since President Trump came to office. We really respect his endeavors and the endeavors of Vice President Pence. We feel solidarity with the president because he is under very unfair attacks in the international media, as the Hungarian government is.

Q: Prime Minister Orban recently visited Moscow. At a press conference with President Putin, PM Orban said, “Both of us think that it’s important to protect and strengthen Christian culture in the modern world.” Why is this important and what does your partnership look like?

A: Russia takes protecting Christian communities in the Middle East seriously. We appreciate that. We don’t run common programs so far but, for example, at the Organization for Security and Cooperation in Europe (OSCE), when I wanted to organize an event on the destiny of the persecuted Christian communities around the world, only Russian Foreign Minister Sergey Lavrov would join. We have to count on Russia in this regard. Regardless of belonging to two different military alliances, we have to count on and work together with Russia.

The European political arena and the global political arena, the United Nations especially — these big organizations have Christian-phobia as though it was the last form of discrimination allowed. Currently, Christianity is the most persecuted religion on earth. Four out of five people killed because of his or her beliefs are Christian. Europe and the United Nations, basically, turn a blind eye to this.

Whenever the EU foreign ministers come together and I speak in favor of the persecuted Christian communities in the Middle East they always warn me: Talk about religious minorities instead of Christian communities so we don’t hurt the sensitivities of others. Who will speak out on behalf of the Christians if not Christians themselves? I envy the enthusiasm of Muslims who speak with enthusiasm about their people all around the world. Yet, we Christians are warned to be shy and I simply don’t understand.

Q: The Hungarian Government decided to help Christians in the Middle East where they live, to return home after terrorists were defeated. How is the assistance program going?

A: So far, we have spent $15 million Euros on assisting and supporting the Christian communities in the Middle East. We finance in a direct way, rebuilding schools, churches, houses, and clinics. We don’t use international organizations, the United Nations or Red Cross, to distribute the money.

So, for example, in an Iraqi village called Telsqof, we have reconstructed about 400 houses destroyed by the Islamic State. In Erbil we have built a school and we are financing the cost of St. Joseph Hospital. We finance activities sponsored by the Antiochian and Syriac Orthodox Churches, the Maronite Catholic Church, and the Greek Catholic Archdiocese of Aleppo, Syria.

We also respect the request of the leaders of the Christian Churches in the Middle East. They do not want us to attract their people to leave for Europe but would like to have our assistance to help these people to stay in their homes and get stronger there.

Q: Do you have any partnerships with other governments?

A: We do it on our own. We will cooperate with anyone else making positive contributions but the most important thing is to cooperate with the local churches.

Q: Hungary has some very strong regional allies: Poland, Slovakia, Czech Republic — the “Visegrad Four.” Do you see the possible construction of a block, of these countries and others that might oppose the arrogant policies from Brussels?

A: You know we have a very strong alliance with the four countries of Central Europe, which is historically very well based. The Visegrad Four is now the tightest and most effective alliance within the European Union, no question about it. We are very strong. We are very strong economically. So our growth rate in the region is twice as high as the European average growth rate, and politically, we are successful because we base our policies on common sense. When it comes to the economy, or security, we have carved out a very successful migration policy supported by our people in a very robust way.

The Central European alliance is becoming politically, and economically, stronger and stronger and of course now when it comes to migration policy, the Austrian government and part of the Italian government — the Minister of Interior — they definitely share our position on migration which is good news. European parliamentary elections will take place next May and we really hope that the setup of the European parliament will be fundamentally changed and anti-migration forces will reach a majority.

Victor Gaetan is senior international correspondent for the National Catholic Register and a contributor to Foreign Affairs magazine and the Washington Examiner.

The two photos are courtesy of the Hungarian Foreign Ministry