by Ellie Gardey
The 2023 March for Life (The American Spectator) 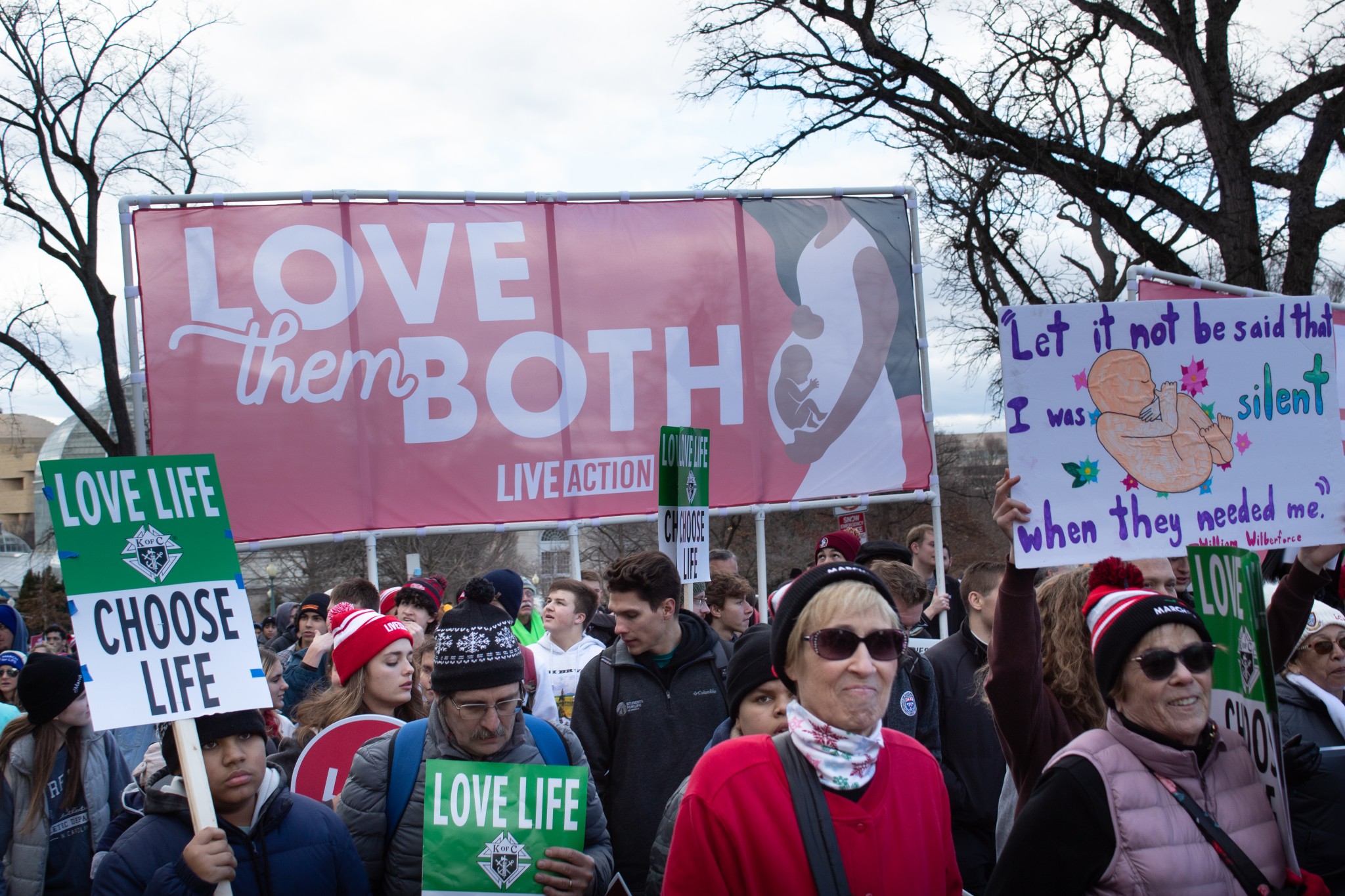 For 50 years, tens of thousands of people faithful to the cause of protecting the unborn have annually descended on Washington, D.C. to bear witness against the evil of abortion.

This year’s March for Life, however, existed in an entirely different political situation: the Supreme Court has overturned Roe v. Wade, the insanely decided case that granted a federal right to murder one’s own children. Now, state legislatures, so long as state constitutions or jurists do not interfere, are empowered to write laws outlawing or limiting abortions. The federal government is also so empowered — though it lacks the political will to act.

Such a drastically changed situation did little to alter the habits of a decadeslong march that welcomes much of the same crowd year after year.

The march continues to roughly correspond with the anniversary of the Roe v. Wade decision, a date that was previously used to call for the overturning of the ruling. Organizers said the date was maintained due to long-term permits for the march as well as discussions with leaders of schools and churches, who stated that they had reserved time in January for the march and that it would be difficult to move the date. March organizers, led by Jeanne Mancini, the president of the March for Life, insisted that holding the demonstration at the same time would represent a celebration that the old order has fallen.

At the march’s theme unveiling in October, the organizers said that the route of the march would change from a journey toward the Supreme Court to a journey toward the Capitol. That would demonstrate a shift from calling for judicial change to calling for legislative change. But the organizers were then hit with tighter restrictions that limited the closeness with which marchers would be able to approach the Capitol. Thus, an only slightly altered march route crossed in front of the Capitol, but still ended up near the Supreme Court. The changed purpose that would have been implied by a different ending point was lost.

Unfortunately, holding the march to mark the anniversary of a dead law and marching to the Supreme Court left the impression that the march was sleepwalking through the same demonstration. A person who had seen the march in 2022 would not be able to detect visual distinctions in 2023. Few signs noted the victory of Dobbs. (READ MORE: March With Overwhelming Hope)

The March for Life has played a critical role in uniting the pro-life movement and inspiring people to act. Now, its organizers need to act strategically to inspire in a new era.

Here are some ideas for how the March for Life could better fight for the unborn:

The March for Life has, over the past 10 years, been horrible at encouraging people to make homemade signs. Most people do not bring a sign that protests abortion. As the majority of the march’s attendance is made up of school and church groups that travel together, people simply show up on a bus and follow behind a banner that denotes their school or church. The designation is much less helpful than actually calling for an end to abortion.

The march makes efforts to remedy this lack of effort: it supplies signs that marchers can use. The Knights of Columbus and LiveAction are examples of organizations that have donated these materials. 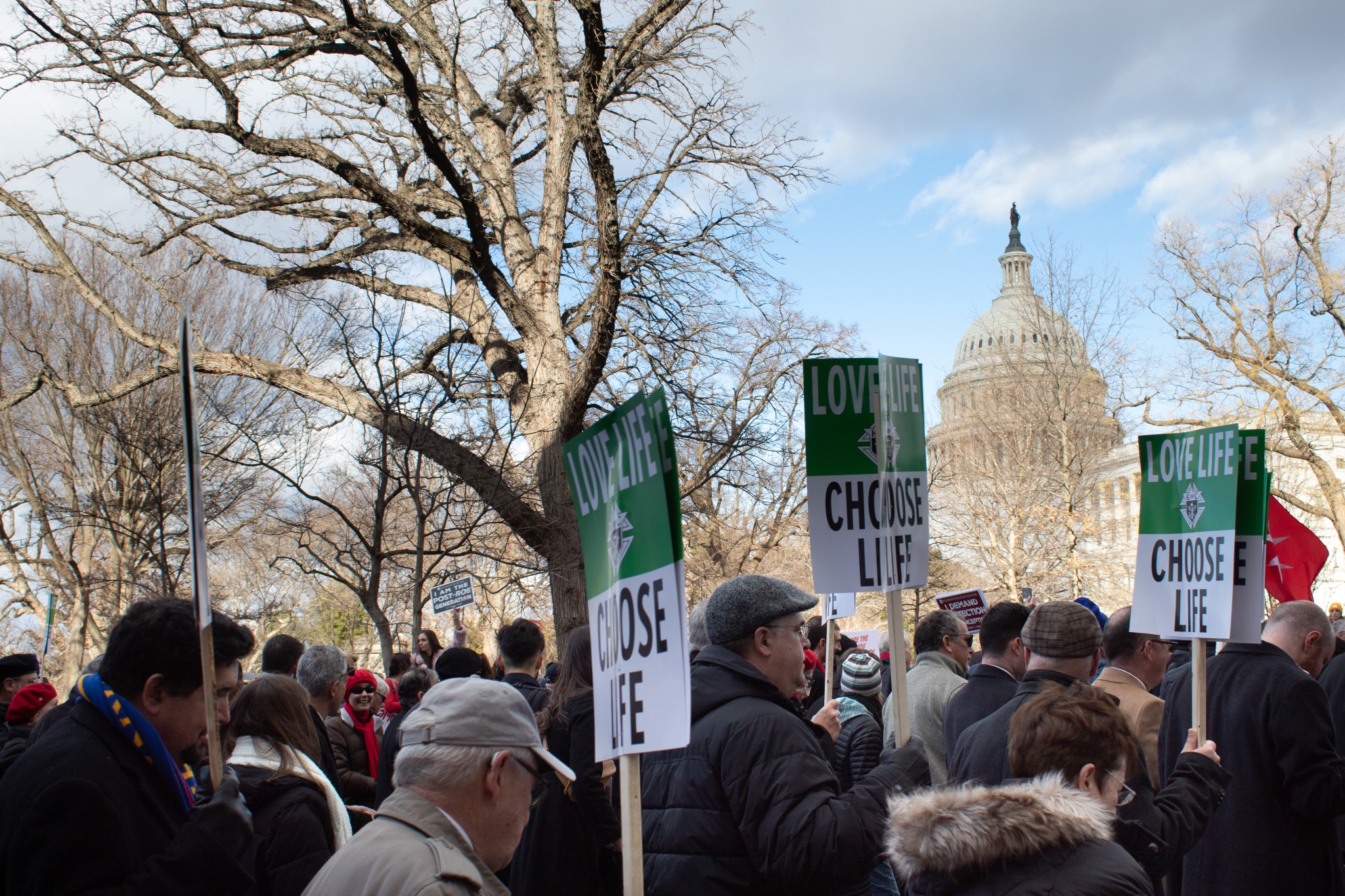 People march in the 2023 March for Life (The American Spectator)

Having the same mass-produced sign does not denote the same level of commitment. A multitude of personally created signs, on the other hand, would demonstrate the passion that pro-lifers have for defending the lives of the unborn.

Here, the March for Life can take a page out of the book of a vastly less worthy cause, the Women’s March. The Women’s March, which was successful in garnering crowds and attention for a few years before it burned up in an anti-Semitism scandal, was really good at encouraging people to make provocative, visually appealing signs. In carrying their signs, people would tangibly give a voice to their position.

So many unique signs were carried that dozens and dozens of news articles splattered at the top of news organizations’ websites bore slideshows of the posters. It was attention-grabbing.

Years later, the images of the 2017 Women’s March in Washington, D.C. are immediately recognizable. 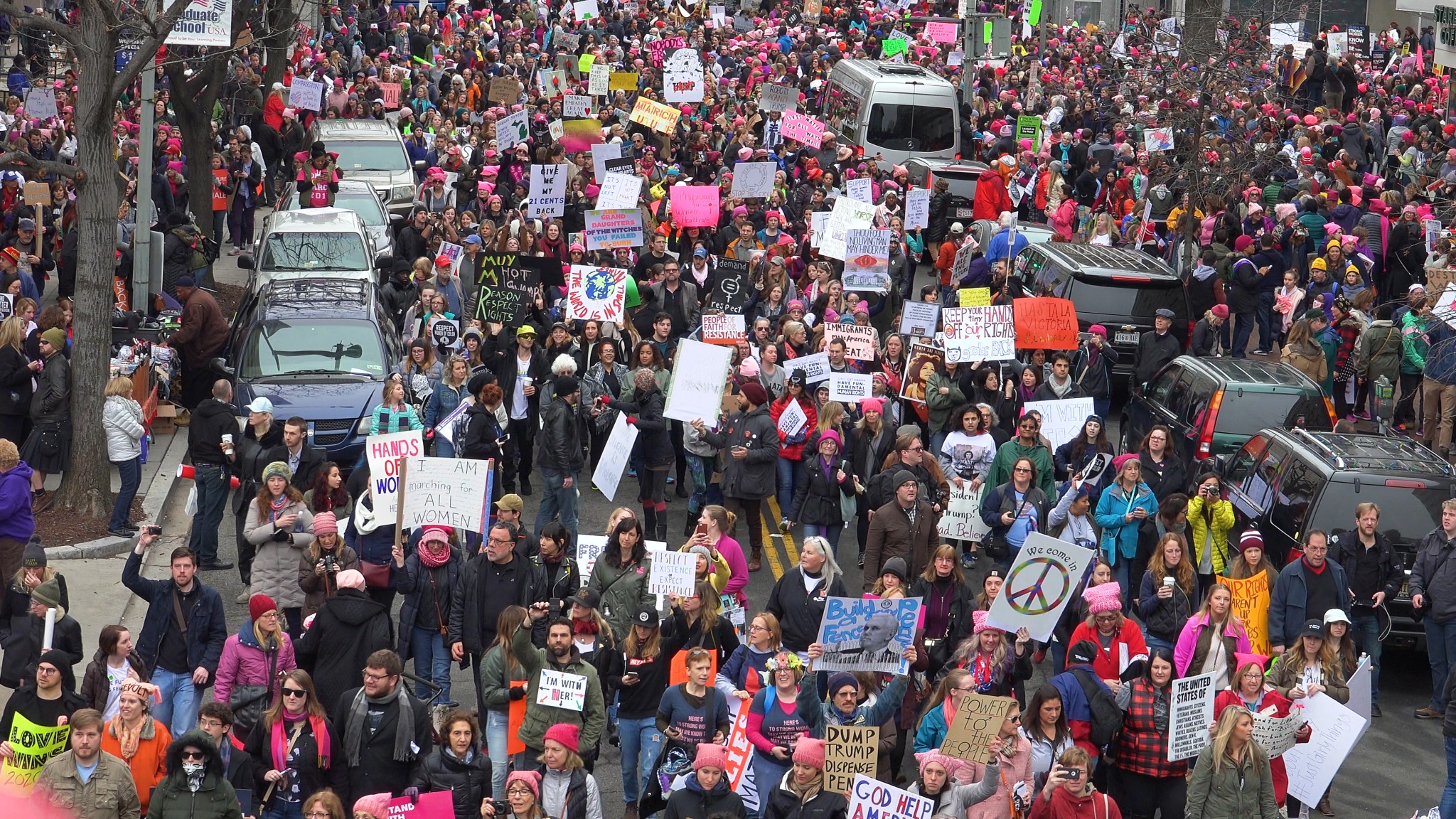 The Women’s March was so encouraging of unique signs that it became a feminist right of passage to create and display your Women’s March sign, which you would share on social media and with your family and friends. 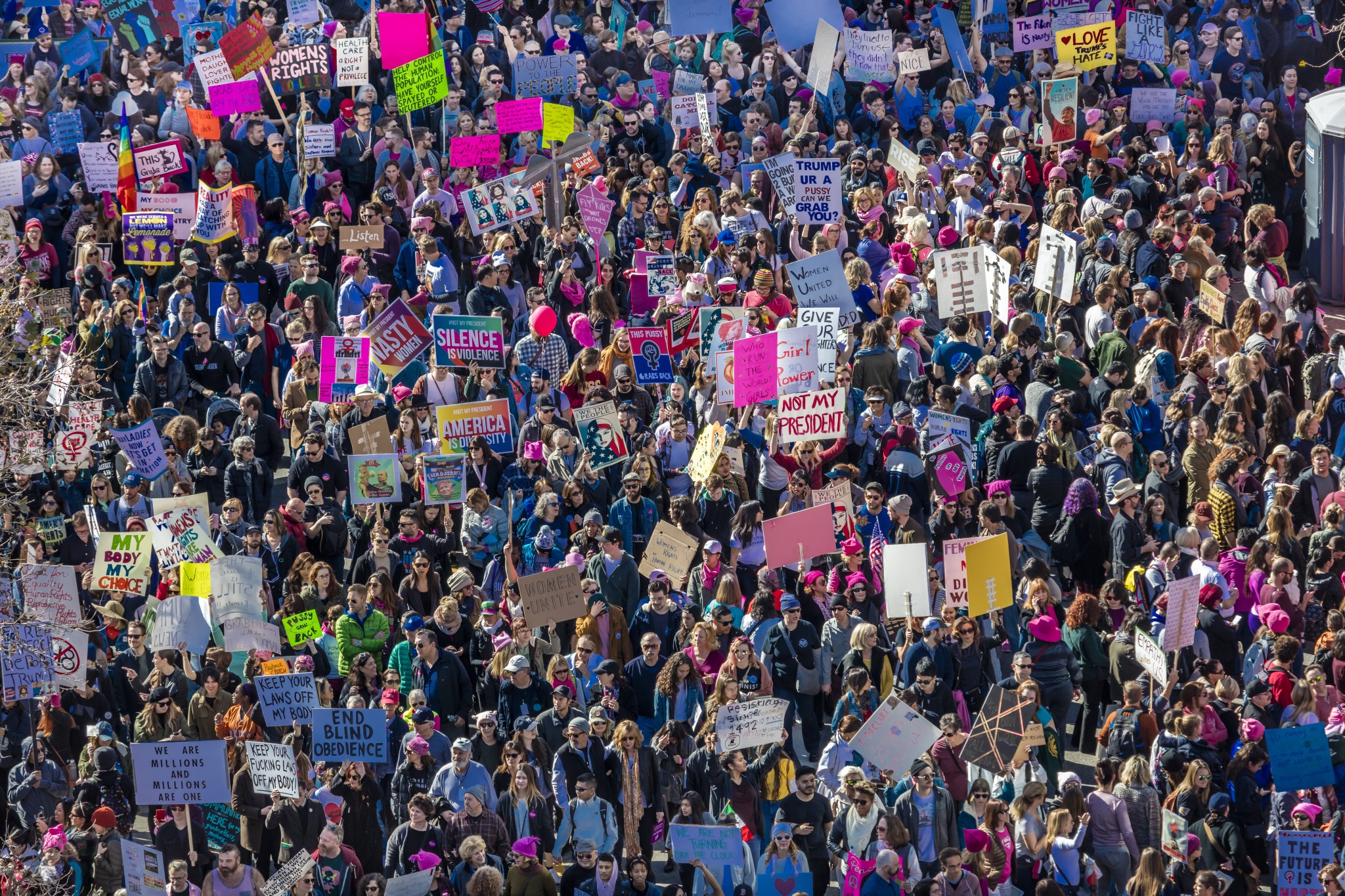 The March for Life needs to better communicate the essentialness of making signs to advance the pro-life mission. A homemade sign stating “End abortion now!” would be so much better than the Knights of Columbus logo.

Many people travel overnight on a bus to get to D.C. for the March for Life. The problem is that people who spend the night on a bus look half-dead afterward. People wear hoodies and sweatpants and women pull their hair back. I’m in a huge crowd, so it doesn’t matter how bad I look, is typically the attitude.

Actually, as a political protester trying to draw attention to the biggest human-rights issue of our time, how you dress does matter. It’s harder because the march is in winter, but marchers could try wearing a nicer coat, pro-life-specific regalia, or a pro-life button.

Your worst hoodie says: this doesn’t matter all that much.

A group of women at the 2023 March for Life wore pretty winter jackets, put on nice makeup and did their hair, and held homemade signs. Their point was made: we are successful, empowered people and we are fighting for the unborn.

Most of the marchers this year walked slowly and said nothing. Cheers were few and far between.

Groups should come with cheers they have practiced in advance. It’s critical to convey enthusiasm and state a message.

This is not supposed to be a vigil. It’s a demonstration.

As stated earlier, the 2023 March for Life pretty much did the exact same thing as the 2022 March for Life even though the political situation is radically different.

The difference calls for change: march to a different location, march at a different time, or change how the march is marketed.

At the march, I asked one man in his 20s what he was marching for.

“I don’t talk to the press,” was the answer.

“I don’t talk to the press,” he insisted.

A woman affiliated with the media is more likely than not to be a pro-choice activist. Surely, this man assumed I was out to get him and portray him as some horrible person who wants to “control women’s bodies.”

Such a situation, however, would actually have been the perfect time to advocate for the unborn. Presumably, if you’re at the March for Life, you are motivated to advocate against abortion in a way that will get the most public attention. And this man was advocating: he was handing out St. Michael prayer cards to police officers stationed along the march route.

Marchers should write about their experiences in local newspapers or newsletters, share their advocacy on social media, and, yes, talk to the press.

In speaking to marchers, I got conflicting answers on what they were marching for.

Two women from Pennsylvania insisted to me that no, they definitely weren’t calling for any federal bans or restrictions.

“What was a federal decision is now a state decision. But we have to keep working,” said Diane Drabinsky.

They seemed to assume that I am pro-choice and assured me that I needn’t worry because women can use birth control.

In October, I asked Mancini, the march’s president, if the then-changed ending point of the march, the Capitol building, implied that the March for Life was calling for a federal ban on abortion. She explained that this was not necessarily the case and that marchers all have different strategic positions on how to advocate for life.

It’s a tough balancing act for Mancini because there is so much division and moral lukewarmness among pro-lifers. But that’s why the March for Life is well positioned to lead pro-lifers in becoming united around a goal.

The previous goal, building a Supreme Court that would overturn Roe v. Wade, seemed insurmountable for decades. But the March for Life significantly contributed, over its decadeslong existence, to making the impossible a reality.

The March for Life could set a goal of making abortion illegal after a heartbeat can be detected in all 50 states. This inherently communicates the humanity of the unborn and would actually make a difference in reducing abortions, as a heartbeat can be detected as early as six weeks’ gestation. A 15-week ban is not a good goal, as the percentage of children who are aborted after 15 weeks’ gestation is so small, roughly 6 percent. A six-week ban would of course only be a marker along the path of ending all abortions, as 36 percent of abortions take place before that time.

FiveThirtyEight estimates that the Dobbs decision resulted in 10,000 fewer abortions in 2022. This does not account for the huge increase in mail-order abortions. This is a disastrous result. The pro-life movement was evidently not ready to save lives via legislation upon the reversal of Roe. It seems that the goal of “Get the Supreme Court to overturn Roe” supplanted the actual goal, “End abortion.”

Pro-life leaders need to strategize and implement change to have hope of success. That starts with the March for Life.

The Dangerous Criminal Operation That Trafficks Abortion Pills to the US

Republicans Are Downplaying the Dobbs Opinion — That’s the Wrong Strategy