More Politics
Sign Up to receive Our Latest Updates!
Register
Hot Off
The Press
A Further Perspective
25th Amendment Implementation, 1973-2021
by John C. Wohlstetter
Laughing Matters
What Politicians Should Do This Vacation Season
by Itxu Díaz
Campus Scenes
A Conservative College Student’s Survival Guide
by Juan P. Villasmil
The Nation’s Pulse
Both the Republican and Democratic Bases Are Now Antiwar
by Karen Kwiatkowski
The Current Crisis
Public Nuisances
by R. Emmett Tyrrell, Jr.

Mohan Kale is an Indian businessman in his early 50s who trafficks abortion drugs to thousands of women in the United States. Kale has said that he earns millions in revenue annually by selling the abortion pills and other drugs.

Kale’s business is one of the most successful in the abortion-by-mail black market, which has exploded in size in the United States in recent years.

Kale credits his wife, Maitreyi, a social worker involved in sex education, for encouraging him to start illegally selling the abortion pills to other countries as part of his online drug business, N N Agencies.

He insists that a woman facing an unplanned pregnancy “has” to be able to have access to abortions pills “no matter what the law of the land says.”

In a two-year period from March 2018 to March 2020, more than 57,000 women in the United States requested abortion drugs through Aid Access, the third-party organization incorporated in Austria that connects women to Kale’s Indian business. Aid Access also connects women to doctors in the United States when the woman lives in one of the 12 U.S. states where they are legally able to do so.

Aid Access is run by Dr. Rebecca Gomperts, who was named to Time Magazine’s list of the 100 most influential people in 2020 because of her efforts to expand access to abortion. Gomperts leads a team of doctors who communicate via an online form with pregnant women who are seeking abortions and connect the women to Kale’s N N Agencies over email.

Kale told The American Spectator that according to the directions he received from Gomperts, “I’m not supposed to talk to you.” 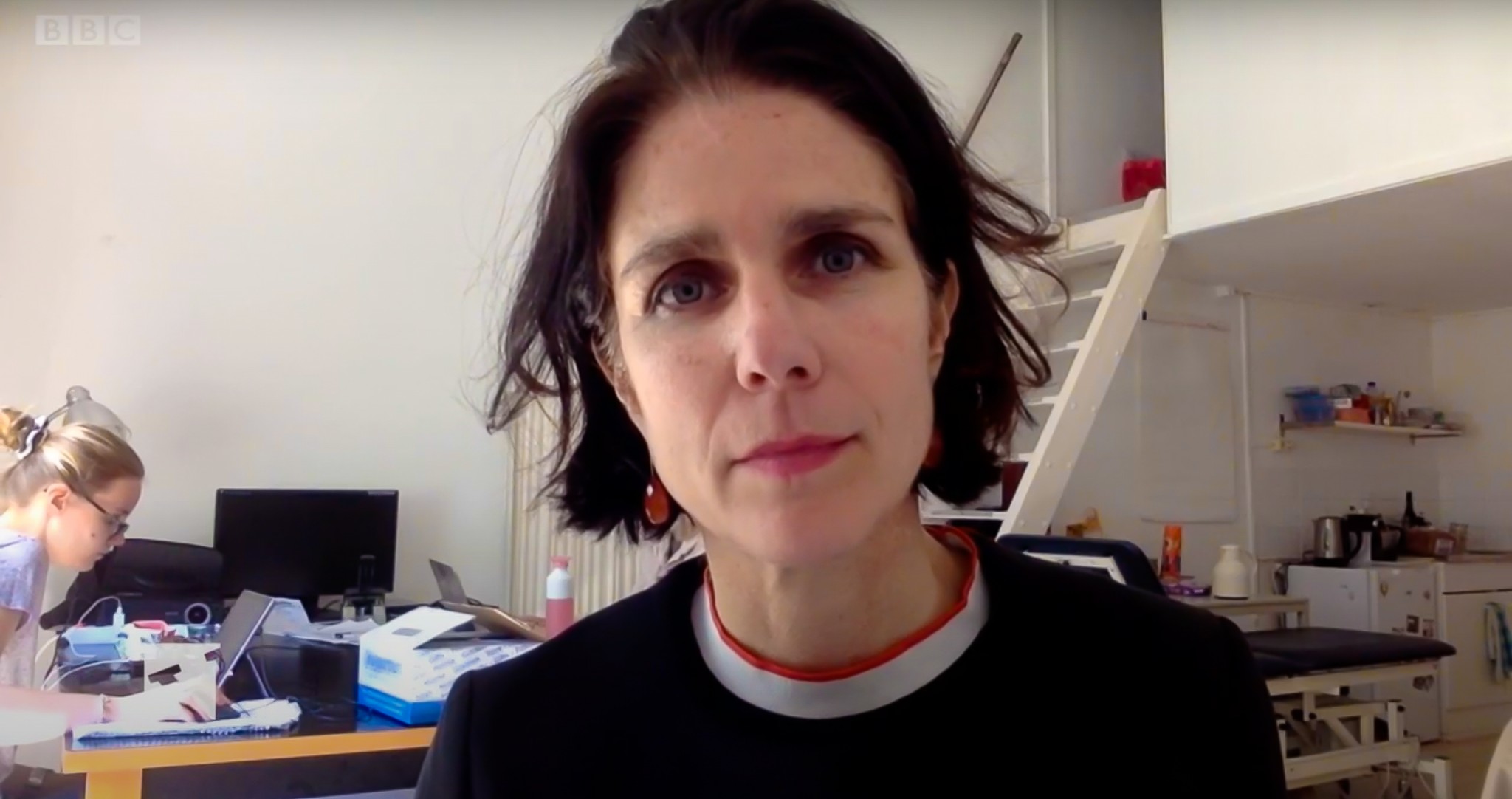 Dr. Rebecca Gomperts is interviewed by the BBC in 2019 (BBC/YouTube screenshot)

Forty-nine percent of women who use Aid Access say that privacy concerns motivate them to illegally order abortion pills from Kale’s Indian company as opposed to going to a U.S. clinic.

For instance, a testimonial on Aid Access’s website reads, “I didn’t have to show my face anywhere and fear the judgement of others. I didn’t have to go through the long uncomfortable process of going to a doctor’s office.”

Abortion advocates see mail-order abortions as a solution to a potential post-Roe v. Wade world. A recent op-ed in Ms. Magazine said that thanks to organizations like Aid Access, a reversal of Roe v. Wade “would not send us back to the pre-Roe world of coat hangers and hospital wards full of deathly ill women.”

In April, the FDA announced that Americans can receive a prescription for an abortion medication using telehealth services for the duration of the COVID-19 pandemic. But there is pressure from pro-abortion groups for this to be extended, as many abortion supporters believe that accessing an abortion should be as easy as ordering a package from Amazon from the privacy of one’s own home.

Gomperts says that doctors at her organization write prescriptions for the women they connect to Kale’s company. But it is unclear if there are any licensed pharmacists who work at N N Agencies who are authorized to fill prescriptions. Kale is not a pharmacist, and he says that he employs five “assistants.” The FDA says that N N Agencies is neither a “clinic” nor a “medical office.” A federal judge in Idaho called N N Agencies “a merchant exporter of prescription medications.” Gomperts did not respond to requests for comment.

The abortion drugs that N N Agencies ships to the United States are knockoff versions of the U.S.-approved mifepristone and misoprostol, and are produced by Indian manufacturer Synokem Pharmaceuticals.

The FDA has warned that using unapproved drugs, such as the abortion pills sold by N N Agencies, carries “significant health risks” because the agency cannot ensure consistent drug quality or accuracy of the drug’s label. Up to 20 percent of drugs shipped from India are counterfeit.

In the United States, the FDA requires that women who receive a medication abortion go to a provider who follows the Risk Evaluation and Mitigation Strategy because of the dangers associated with medication abortions. This strategy requires that patients are informed of the risks of the serious — sometimes fatal — complications of mifepristone and that the drug is dispensed in specific health care settings. This strategy also requires women to receive comprehensive instruction on the use of mifepristone and misoprostol and to follow up with a medical professional after the abortion.

A 2019 study examining Indian pharmacies’ sale of abortion drugs found that only 35 percent of pharmacists who dispened misoprostol provided patients with the correct information on dosage and timing. And 31 percent of these pharmacists failed to tell their patients about any side effects of the drugs.

Aid Access says that they provide their patients with safety instructions for a medication abortion and provide medical advice over the phone. But Aid Access’s methods remain in serious violation of the standards set by the FDA.

Women in the United States who are prescribed a medication abortion usually receive an ultrasound or are tested with another method to determine how far along the pregnancy is because there can be serious complications if a woman who is more than 10 weeks pregnant or who has an ectopic pregnancy takes the drugs. But women who receive an abortion from N N Agencies are not asked to receive an ultrasound. Instead, women fill out an online form where they say how far along they think they are. 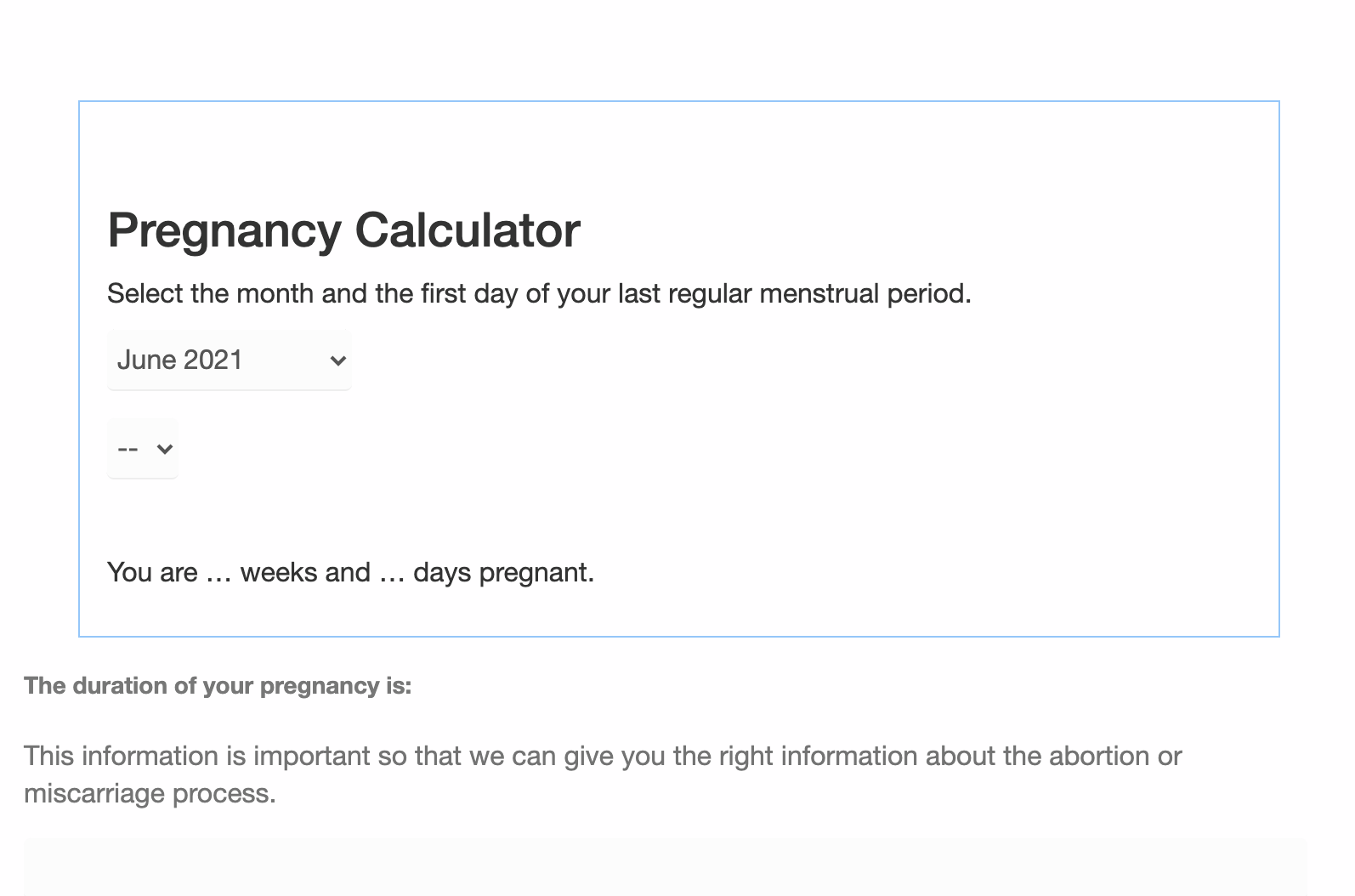 The form women are asked to fill out on Aid Access’s website to determine how many weeks pregnant they are. Women who receive a medication abortion in the United States legally usually receive an ultrasound (Aid Access screenshot)

Another problem with N N Agencies’ illicit pharmaceutical service is shipping: it often takes weeks for the pills to be delivered, and the drugs are sometimes lost in the mail. In these cases, Kale says that he works as hard as he can to get the pills to women. But the clock is ticking: if a woman takes the drugs after the time that is recommended, there can be severe complications or the abortion could fail to kill the child. Since women who order abortion pills illegally from India usually do not receive an ultrasound, they can’t be sure if it’s too late in their pregnancy to take the pills. The FDA considers 10 weeks gestation to be the latest a woman can safely receive a medication abortion.

According to pro-abortion nonprofit Plan C, it usually takes 14 to 21 days for the pills to be shipped from N N Agencies. This long wait time could encourage women to take the drugs after the FDA considers it safe (for the woman anyway) to take the drugs.

Aid Access says that they will serve women who are less than nine weeks pregnant. This means that even a woman who accurately knows how far along she is could receive the pills two weeks later than the FDA says is safe.

Kale says that he is “always running against time” in trying to get the abortion pills to women in time.

“[I] use every trick in the bag to [get] the drug where it is needed and when,” he said.

Sometimes, however, the packages containing the abortion pills have gotten lost, seized, or rerouted by Indian and U.S. government authorities.

If/When/How, a pro-abortion nonprofit that focuses on legal work, said that they are not aware of anyone who has been arrested only for the act of ordering abortion pills online. Plan C says that at least 24 women have been arrested for “self-use of abortion pills.”

Another concern with Aid Access and N N Agencies is that there is nothing stopping children from ordering the drugs without the knowledge of their parents. A person who identified themself as a 15-year-old girl said on Reddit in January that she ordered the medication abortion from Aid Access without the knowledge of her pro-life parents. People in the comments section responded that she need not worry because the abortion drugs are sent in a “square white packet sealed in a square clear plastic packet/bag” with “N. N. Agencies” stamped on the front.

Mainstream news outlets have heavily promoted N N Agencies and Rebecca Gomperts, portraying them as feminist heroes. Aid Access has received positive coverage from Politico, the Associated Press, the Daily Beast, and more in the past year alone.

In Gomperts’s Time profile, former Planned Parenthood President Cecil Richards called her “a beacon of hope” and “one of the bravest people I know.”

The New York Times brought attention to Kale’s past charity work, quoting Gomperts, who described Kale as a man who feels “a lot of responsibility for the suffering in his country.” Similarly, the Guardian called the abortion drug seller a “bespectacled entrepreneur with an easygoing nature.” Meanwhile, Vice incorrectly called N N Agencies a “pharmacy.”

Pro-abortion organizations in the United States like Plan C market Aid Access to women, propping up an organization that illegally trafficks drugs and does not follow the recommended safety procedures for a high-risk drug.

On its website, Plan C suggests ways that women can avoid prosecution when ordering the abortion pills from Aid Access and N N Agencies. Plan C implicitly suggests that a woman who needs to visit urgent care due to complications from the mail-order abortion should lie and say that she is having a miscarriage because there is no way to detect if a woman has taken abortion pills.

“People who visit urgent care,” Plan C says, “often say they are having a miscarriage (without mentioning that they have taken pills).”

Plan C also suggests that women can use Bitcoin, a VPN, and an encrypted email to hide the fact that they are ordering abortion drugs illegally over the internet.

In 2019, Aid Access’s illegal activities led the FDA to issue a warning letter to the organization ordering them to “immediately cease” introducing “misbranded and unapproved new drugs” into the U.S. market.

The FDA wrote, “Failure to correct these violations may result in FDA regulatory action, including seizure or injunction, without further notice.”

In response to the warning letter, Gomperts filed a baseless lawsuit against the FDA, which was promptly dismissed. She has continued to direct customers to N N Agencies, although the arrangement was cut off for a time during the pandemic due to international shipping closures in India.

It is not clear whether or not the FDA has taken any regulatory actions against Aid Access or N N Agencies, but the illegal drug pipeline continues today.

The FDA declined to comment on whether or not they will take any action against Aid Access.

2
Hither and Yon
The Yawn 6 Committee
by Scott McKay

We're beginning to see what happens when they run out...Read More

Being unblessed by fatherhood (thus far), I have little idea...Read More

5
Daily Folios and Consecutive Sentences
Dare I Say That January 6 Was Not an Insurrection?
by Dov Fischer

Please don’t share this article with anyone except for your...Read More

6
Church and State
The Upside-Down Church
by George Neumayr