Tens of thousands of protesters paraded from the Washington Monument to the Supreme Court Friday at the 49th annual March for Life to demand the reversal of Roe v. Wade.

This time, the tone was markedly different from past marches as the pro-life movement was filled with hope as it anticipated the possible reversal of Roe by the conservative-majority Supreme Court. Last year, the march was scaled back and took place mostly online, making this the first full-scale march since Justice Amy Coney Barrett replaced the late Justice Ruth Bader Ginsburg on the bench in 2020 and the division between conservatives and liberals on the court became 6-3. 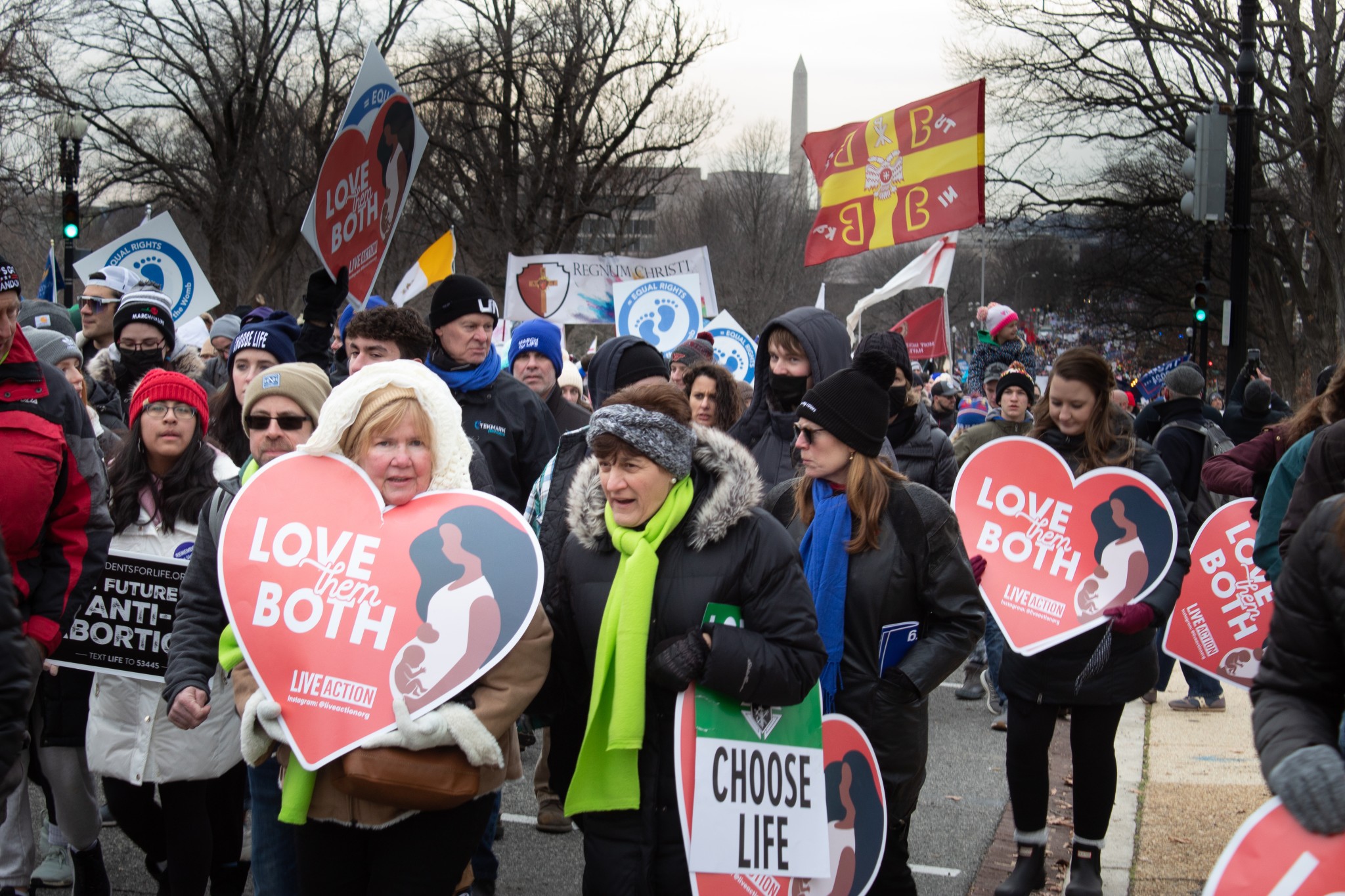 Pro-life protesters climb Capitol Hill on the way to the Supreme Court on January 21, 2022. (The American Spectator)

Marchers were abuzz with the possibility of being part of the last March for Life to take place under Roe v. Wade and expressed overpowering enthusiasm as Catholic priest Fr. Mike Schmitz sent them on their way to the Supreme Court. 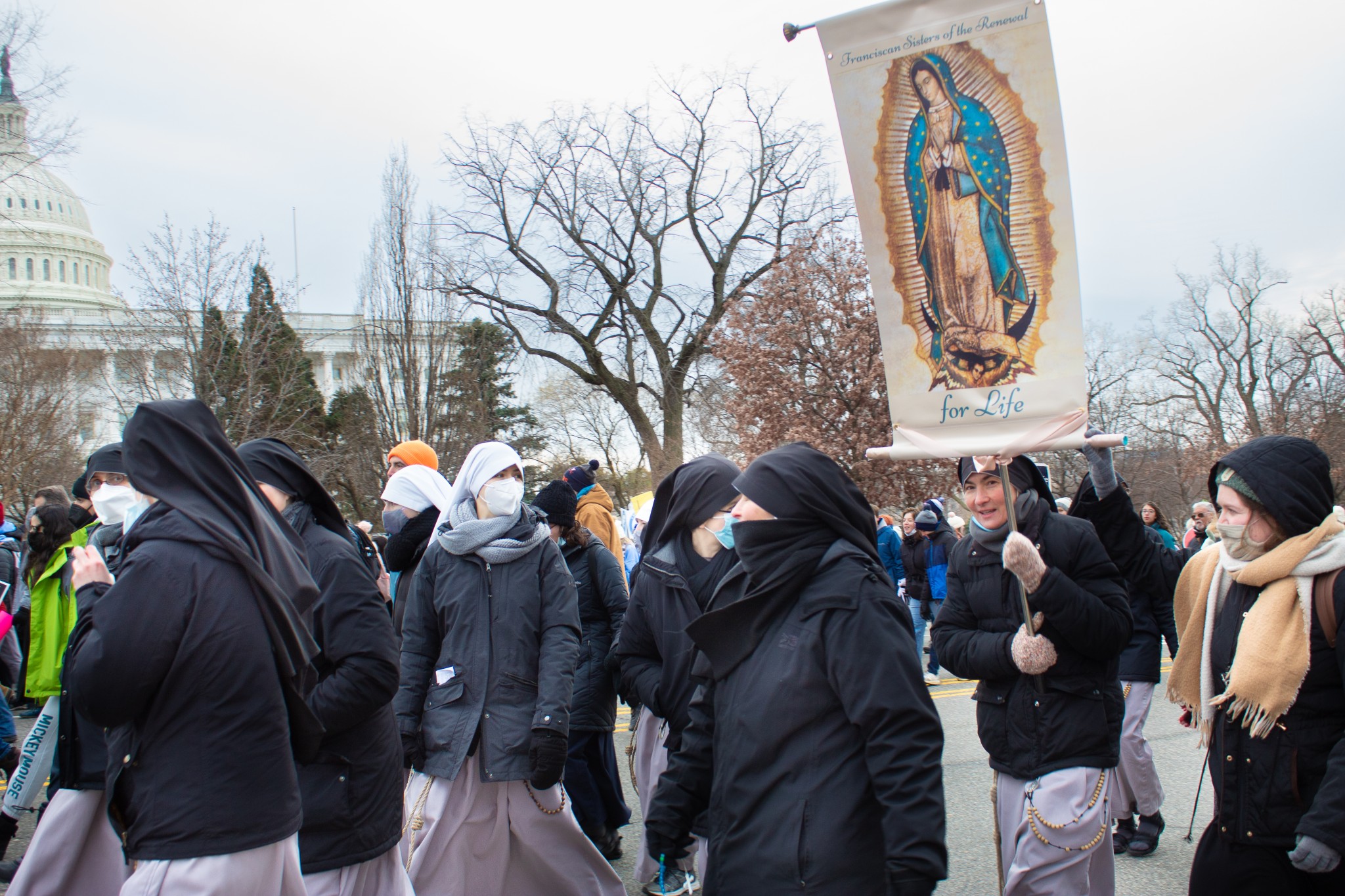 The Catholic Franciscan Sisters of the Renewal hold a banner depicting Our Lady of Guadalupe as they march in front of the Capitol Building on January 21, 2022. (The American Spectator)

March for Life President Jeanna Mancini told the crowd that she hoped 2022 would be a landmark year in the fight to end abortion.

“We are hoping and praying that this year, 2022, will bring a historic change for life,” Mancini said, noting that “Roe is not settled law.”

The Supreme Court heard Dobbs v. Jackson Women’s Health Organization in December and a decision is expected to be announced in June. The case concerns Mississippi’s ban on abortion after 15 weeks of pregnancy. During oral arguments, the conservative justices’ questions seemed to indicate that they are considering scaling Roe back considerably or overturning it altogether. (READ MORE: A Pro-Life Decision in Dobbs v. Jackson Will Save the Lives of Countless Women and Children) 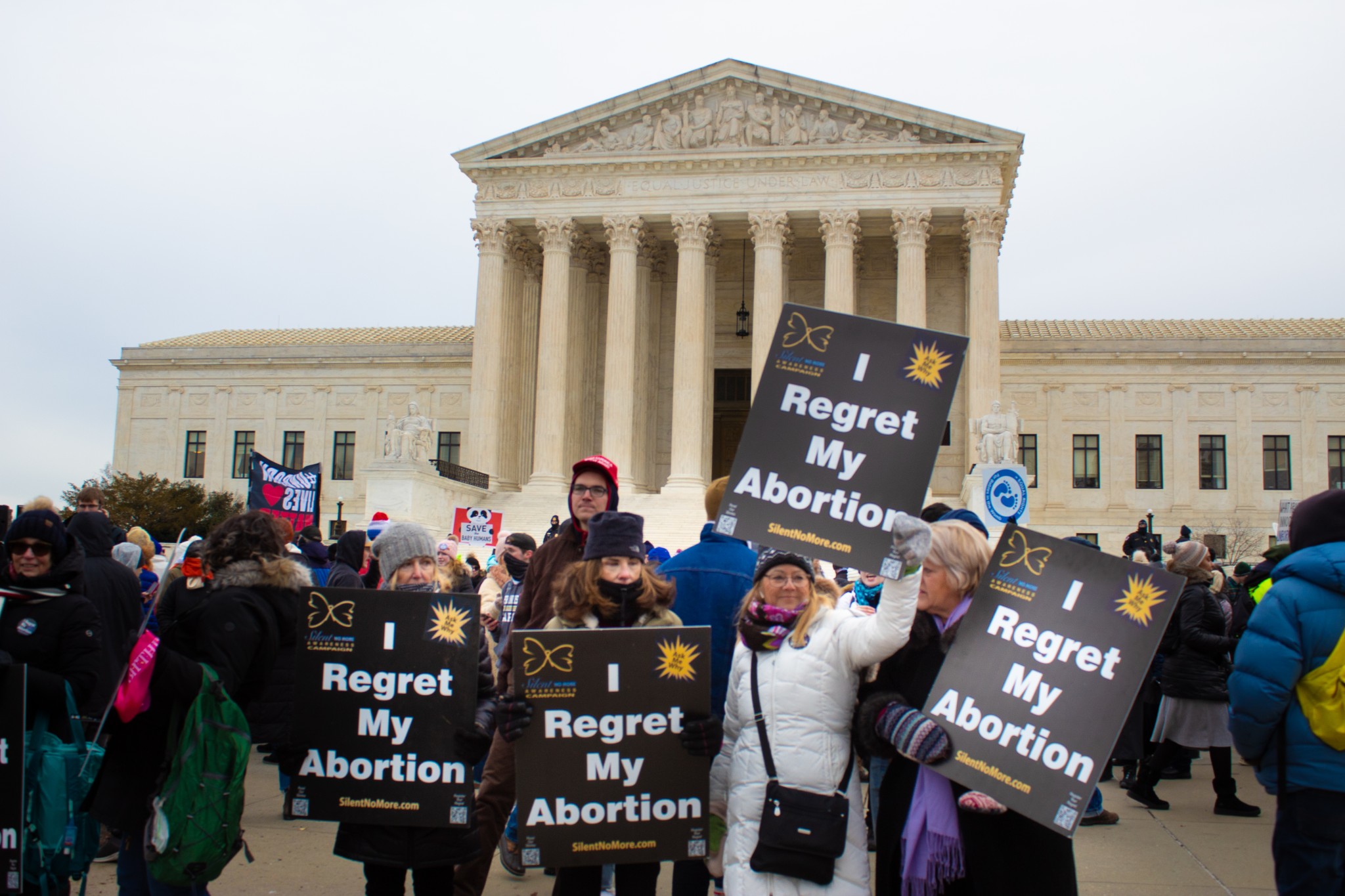 Women hold signs reading “I regret my abortion” in front of the Supreme Court on January 21, 2022. (The American Spectator)

The march also came on the heels of the Supreme Court’s decision Thursday to reject a request from abortion providers that a federal judge be allowed to take action immediately on their challenge to Texas’ heartbeat law, which bans abortions after a baby’s heartbeat can be detected.

Dan Lipinski, the pro-life Democratic representative who lost his seat in a primary in 2020, spoke at the march, saying he was hopeful that next year the March for Life would occur in a “new era” without Roe.

Chris Smith, a Republican congressman from New Jersey, also spoke before the crowd and described the mood as one of “fresh hope and heightened expectations.”

In 2020, President Donald Trump became the first sitting president to attend the March for Life. This year, the former president did not call in or make an appearance and few signs mentioned his name.

People carried signs that said, “I am the post-Roe generation,” “Women’s rights begin in the womb,” “The future is anti-abortion,” and “Love them both.” 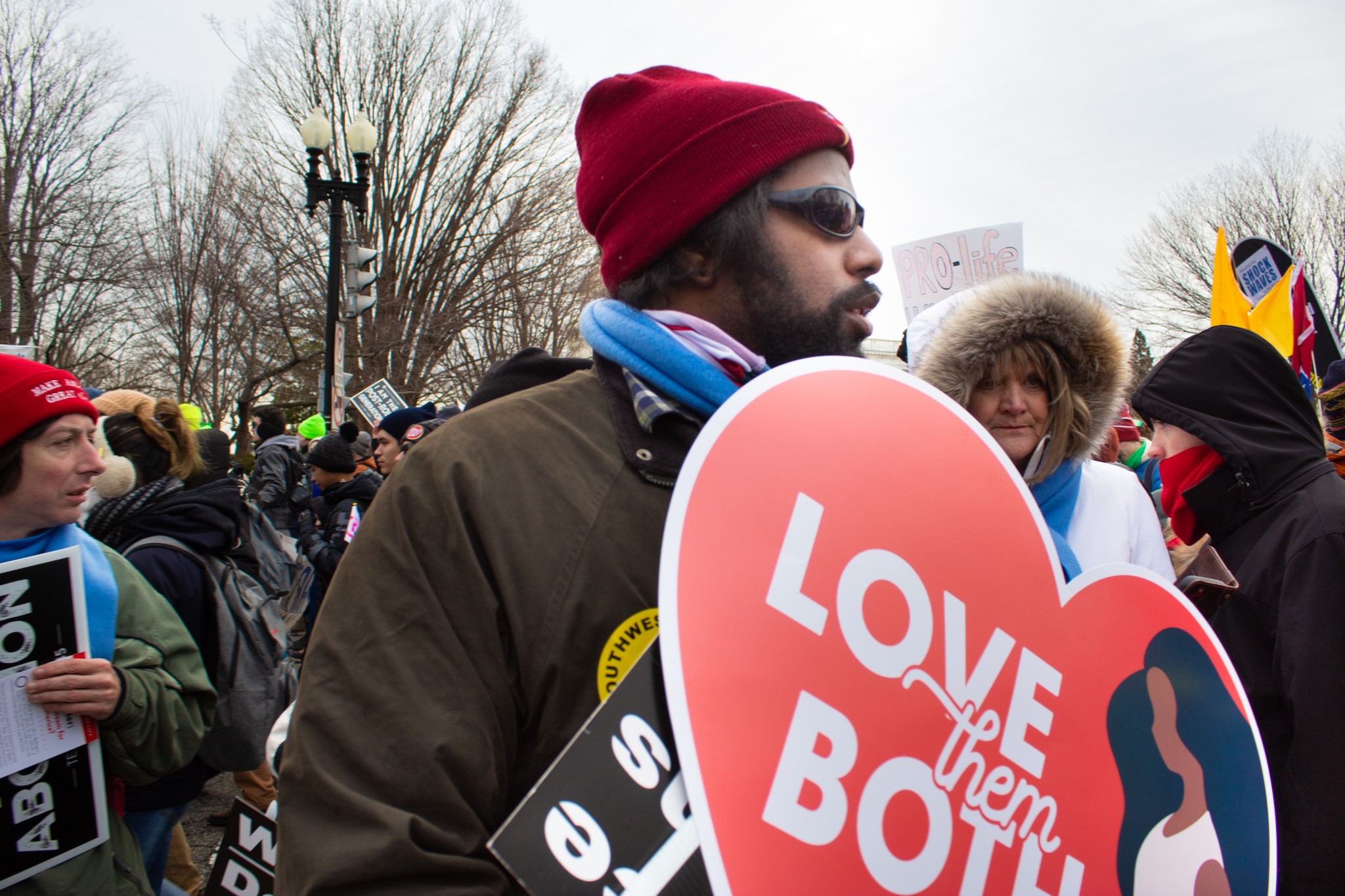 A man holds a sign saying “Love them both” as he protests abortion and Roe v. Wade on January 21, 2022. (The American Spectator)

The March for Life is usually dominated by Catholics, but there is also a significant number of evangelicals who participate.

Young people, priests, and religious brothers and sisters abounded. Many protesters prayed the rosary over loudspeakers or sang religious hymns. Some knelt by the Supreme Court at the conclusion of their march and prayed a complete rosary with their heads bowed.

The theme of the march this year was “equality begins in the womb.”

Mancini said during her speech that abortion is “the ultimate form of discrimination.” She referenced Martin Luther King Jr.’s famous quote: “Injustice anywhere is a threat to justice everywhere.” 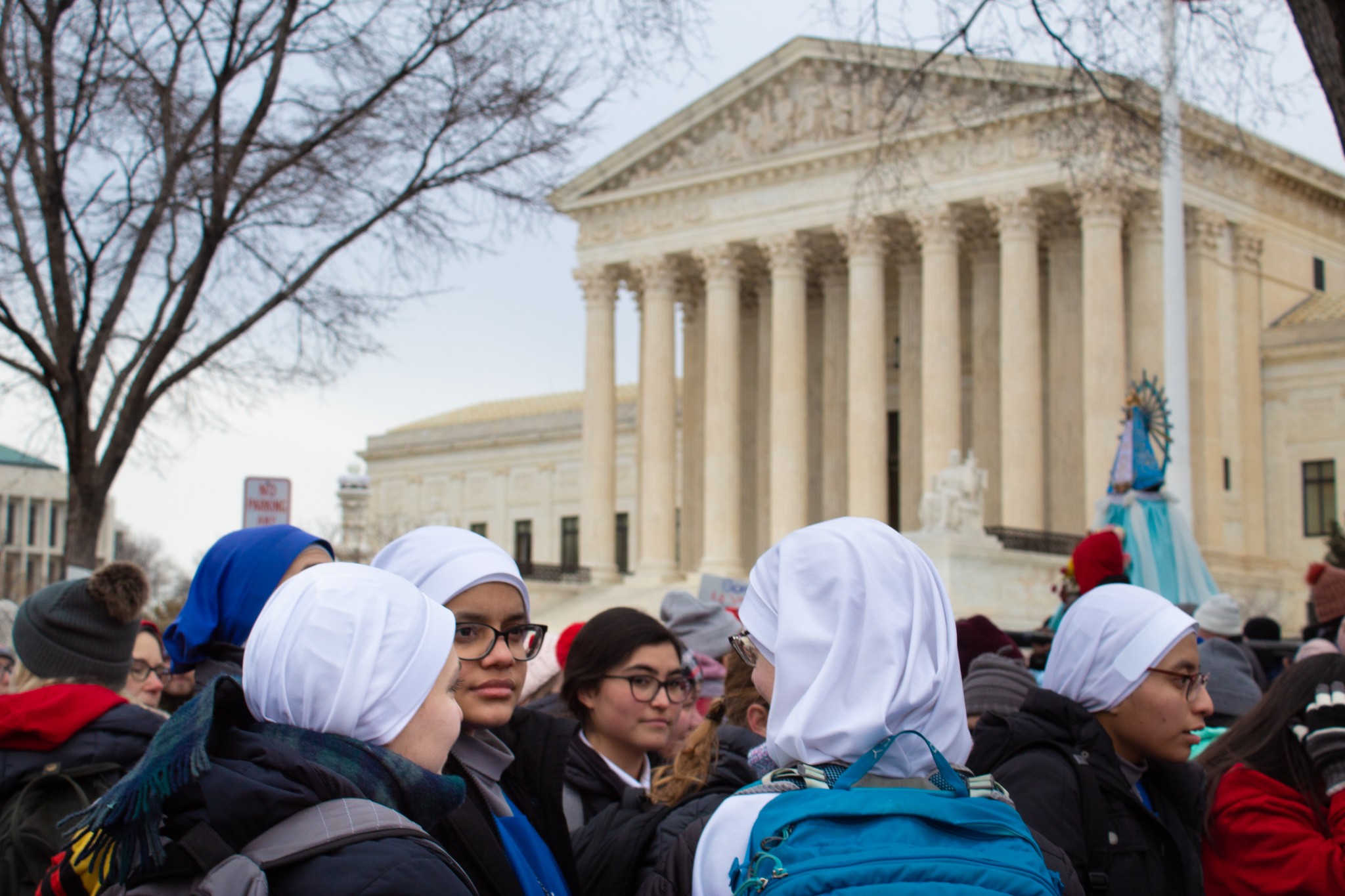 Unluckily for the protesters, the temperature was around a numbing 20 degrees, but that seemed no deterrence. The omicron variant, however, may have resulted in lower attendance, as some schools and parishes canceled their annual trips owing to the surging pandemic.

Pro-lifers were met with very few counter-protesters, with their number perhaps hovering below 10. In past years, pro-choice feminists have made their voices heard and sparred with pro-lifers in front of the Supreme Court. But even with the chance that Roe will be overturned this year, they did not show up. 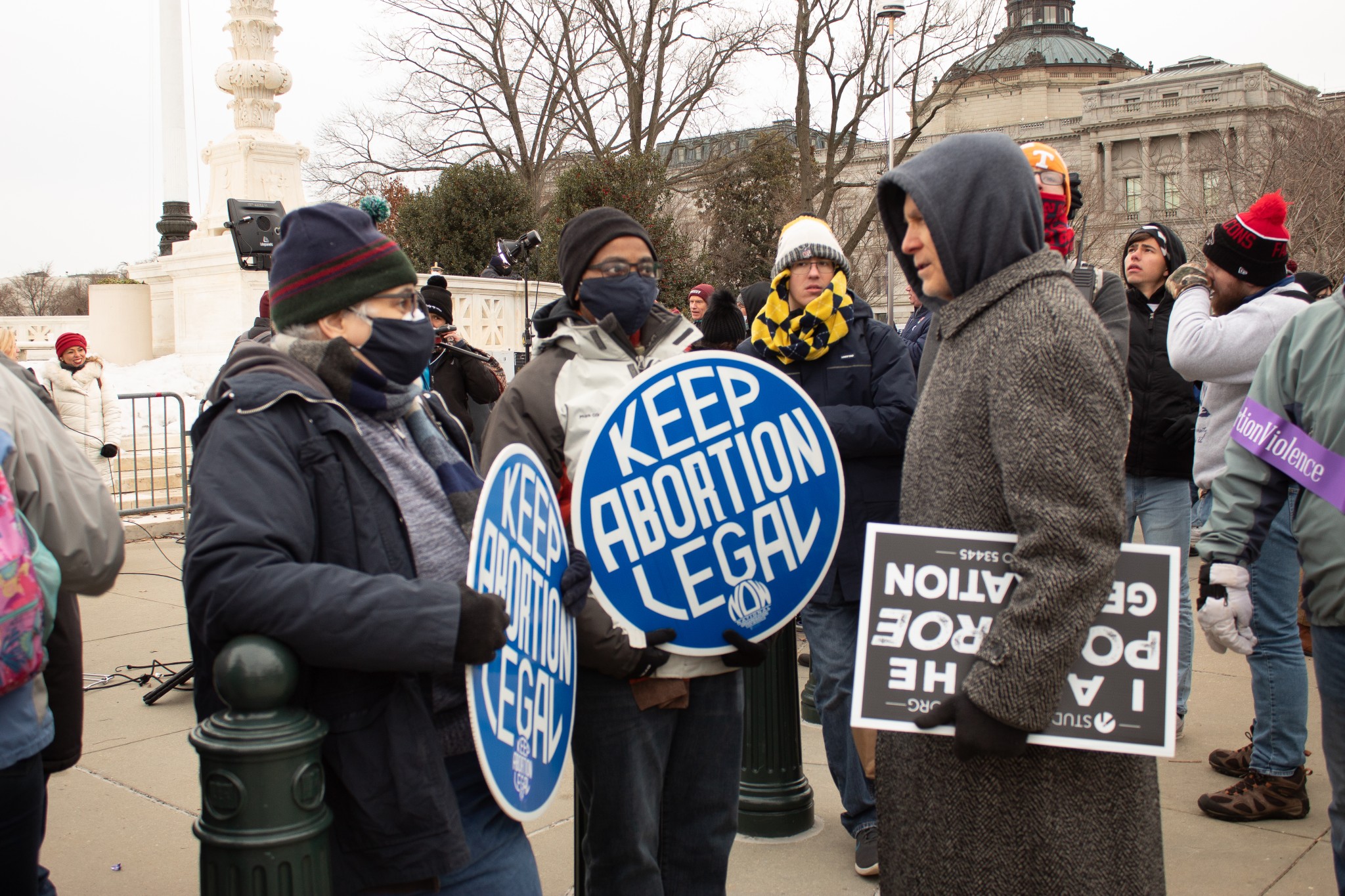 Two pro-choice counter-protesters engage with a pro-life marcher at the annual March for Life on January 21, 2022. (The American Spectator)

But the pro-lifers braved the cold and cheered all the way to the Supreme Court.