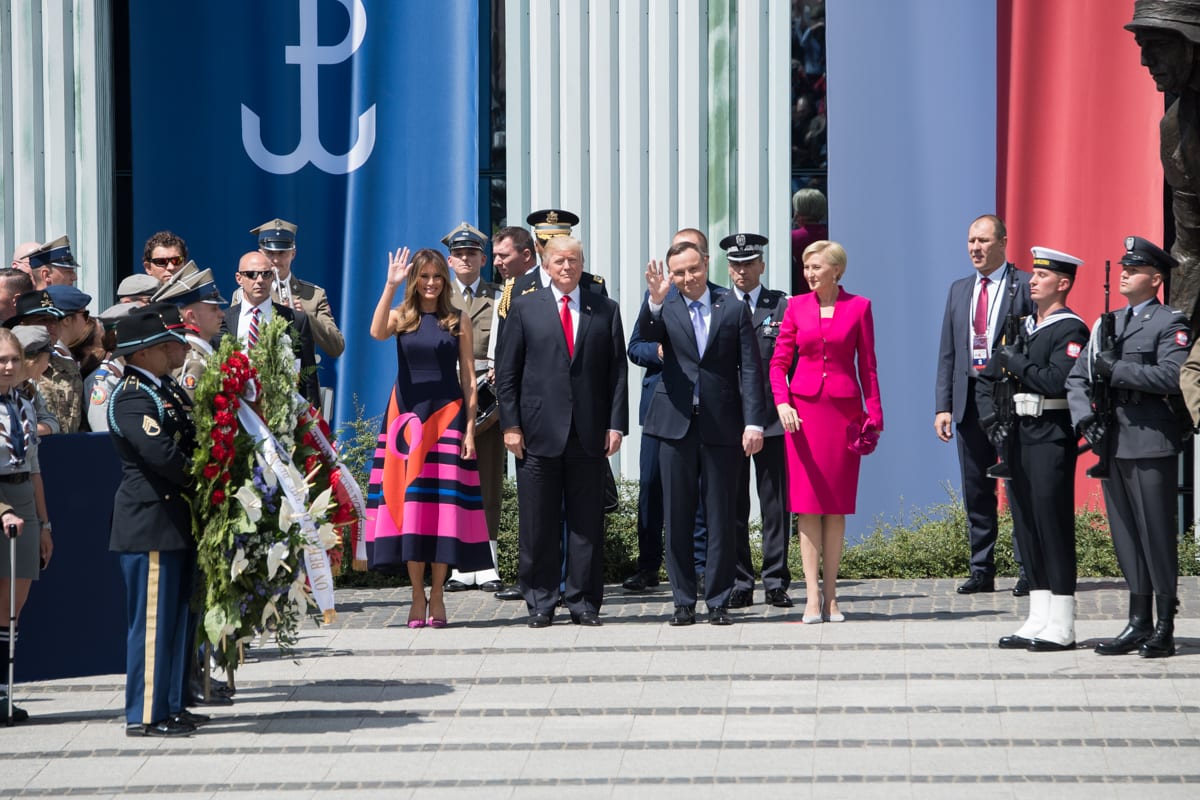 Energy, intellectual property, guns and jet fighters: when you get right down to it, the elements needed to keep the Iron Curtain from shredding, bringing on another great European war, are quite similar to those that obtained when the line was at the Oder. Now it is several hundred miles to the east.

To defend a free Poland, as once the U.S. defended a free Germany, you need a power-house free market-based economy, you need better tech — and the human brains that go with it — and you need the machinery — and the men — of war.

Precisely in order not to put them in harm’s way. The best use of armies is when they deter other armies.

This, in index card form, are the words that will be exchanged between Presidents Donald Trump and Andrzej Duda today, as the American and Polish heads of state meet for the second time in Washington to discuss basic questions of survival.

The survival of Poland, surely. But America needs friends abroad today for the same reasons it needed them after World War II: hungry powers and waves of nihilism in the air challenge the peace and freedom so painfully defended. President Macron of France, in a pretentious D-Day speech (he meant it as flattery), said America is at its best when it fights for all. That is not so, and Messrs. Trump and Duda will say no such nonsense.

After the annexation of Crimea and swathes of Ukraine by the post-Soviet Russians — and mind, there may well be parts of Crimea and Ukraine that are indeed more Russians than Ukrainian, but that is another issue — the Poles, not unlike the Balts and a few other peoples who used to be captive nations, have every reason to be on their guard.

Hence President Duda comes to Washington to assure his American colleague in head-of-statehood that one or even several permanent USA and USAF bases in Poland would be welcome — so welcome that he’ll foot the bill, or rather Polish taxpayers will.

Judging from a recent poll — actually, the elections to the European Parliament — many if not an overwhelming majority of Polish taxpayers agree with Mr. Duda. And even those who voted against his party, Law and Justice, in power since 2015 and expected to keep its governing majority after national elections in September, are not necessarily against the “NATO-East” policy he espouses. They may not like L&J’s Eurosceptic positions. They may themselves be skeptical of its unabashed embrace of Christian, specifically Catholic, values. But they do not doubt the message they must send their neighbor to the east is that bears are fine as long as they are not overbearing.

There is a clear U.S. interest in keeping the space of freedom and Western political and moral values, in their considerable variations, wide. That is why we take an active part in defending distant frontiers, and listen when the leaders of such democratic, free, Western countries as Israel and Poland come to Washington to make the case for partnership.

That was the motivation for NATO in the late 1940s, and it is the rationale for taking an interest in the security of Poland today.

Note that France, whose president now urges us to take on universalist missions, kicked NATO’s headquarters out of Paris in 1967; and at the same time, President Charles de Gaulle gave notice to the American military bases that he was not renewing their leases. All right, all right, that was de Gaulle. But note too that de Gaulle was a keen student of geography and he knew the Soviet invasion would start in Germany and, thanks to the force de frappe, the local nuclear deterrent, it just might stop on the Rhine. And anyway, he knew the Americans would repel an invasion of Germany.

A symposium organized in downtown Washington yesterday by the PGZ foundation underscored these ideas and others at a half day conference. The PGZ foundation, a subsidiary of the armaments firm Polska Grupa Zbrojeniowa (in which the Polish state has an interest), is unapologetic about taking on projects, and making grants — like the one that made this event possible — on the basis of moral, or political, values as well as its parent’s business interests.

Speakers, including Polish defense minister Mariusz Blaszczak, explained Polish defense needs — including advanced American designs — and the advantages of reciprocal economic engagement. American energy exports are good for American balance sheets, while staving off the political influence that comes with Russian domination of the energy markets in Europe through its own exports.

The Chinese threat to dominate the higher realms of the intelligence-and-data economy increases to the degree it takes markets in Europe, and specifically in Eastern Europe. As emphasized by Eric Stewart of the U.S.-Polish Business Council, that would be to no one’s advantage outside China. This is the key difference between global economic growth promoted by free men working in free markets and commie economic predators, though Mr. Stewart is too polite to put it quite that way.

Poland is quite willing to pay its share — it already does; it is not a NATO free rider but a dues-paying member since 1999. On this basis, President Duda is probably right to expect a fair hearing from President Trump. No doubt U.S. security policy must view the issue from a different perspective, including of course the difficulties of devising and sustaining an effective defense line way over there, a line that must pass through countries, notably Hungary, that have their own ideas about what sort of line they need.

Arguing about lines are what friends are for; it clarifies the premises and goals from which nations view their interests and makes it easier to find common ground — or realize there is none.