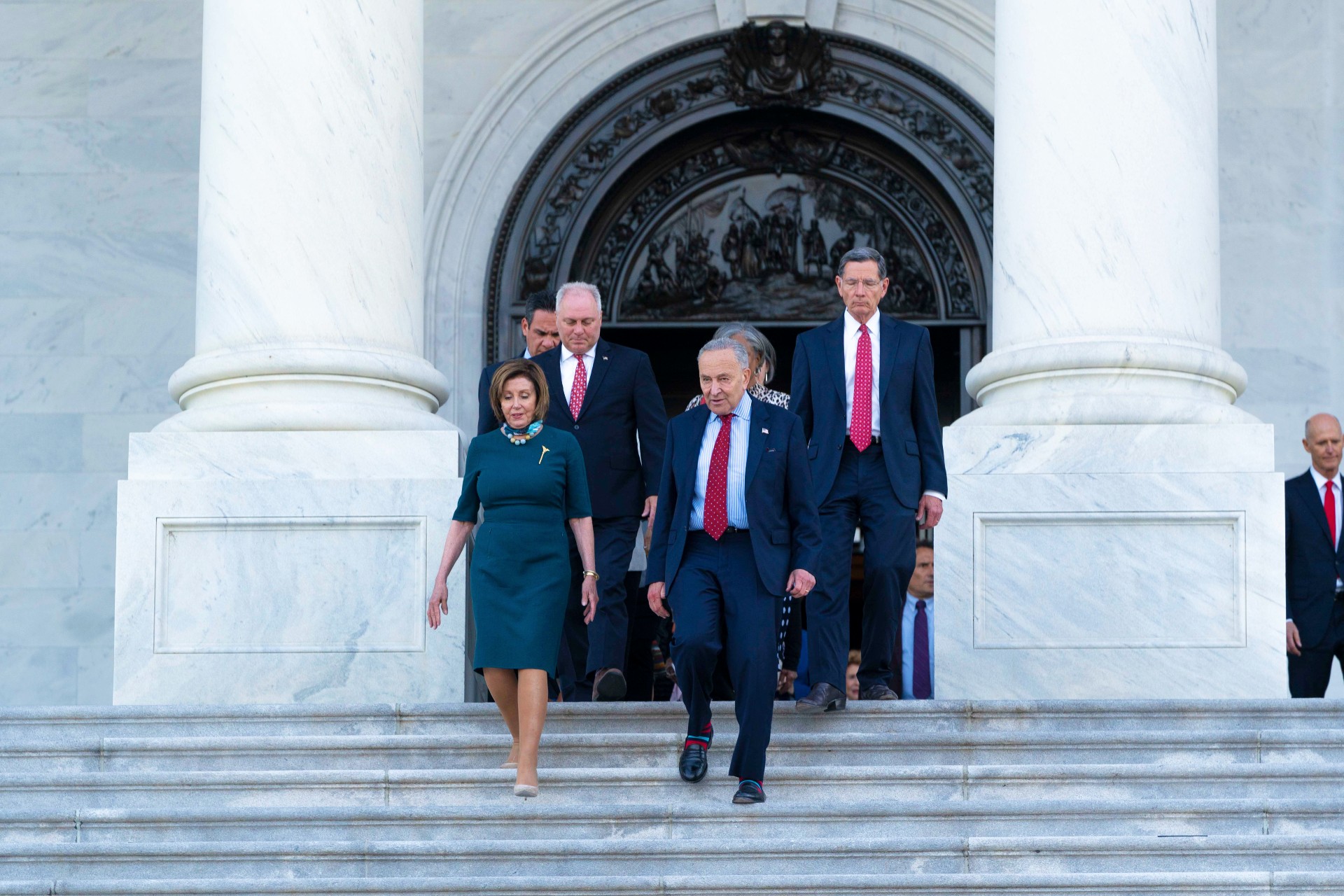 President Joe Biden’s reckless trillions of dollars in spending and woke-socialist policies are preparing the way for a great conservative revival in the 2022 and 2024 elections. The problem is that conservatives are not thinking boldly enough to take advantage of the opportunity.

Biden’s stagflation crisis will undermine his already weakened public support, unify conservative factions, and provide an opportunity for a return to the Constitution as the Founders understood it and a society competent to meet the coming social challenges produced by the progressive woke revolution.

To fix what he called the Constitution’s “fatal flaw” of dividing power, Woodrow Wilson’s progressive plan was to place elite experts in control of central bureaucratic institutions designed to displace the multiple economic, societal, and political institutions that had previously supported America’s values and local institutions. With partial exceptions, only Ronald Reagan explicitly challenged that plan, creating two decades of prosperity. But increasing political pragmatism ended back with Wilsonian bureaucratism and financial collapses in 2008 and 2020.

Reagan’s conservative reforms did not last because they were not sufficiently fundamental, partially because Democrats still controlled the House, which will not be so after 2022. With a 1964 level of victory leading to control of both houses of Congress and the presidency in 2025, a historic opportunity exists to get to the heart of the problem — the centralized progressive institutions themselves. If conservatives plan correctly, Republicans can fundamentally change these centralized institutions, the ones that displaced the local, neighborhood, free, market, associational, religious, local, and state institutions that created the kind of social life ordinary Americans want to live. Patchwork solutions cannot resolve the damage fostered by the exhausted Wilsonian state. They would only end in further citizen alienation and disorder.

Here are seven key institutional reforms that need to be addressed in the overall plan.

The first and most important progressive institution to radicalize the Founders’ economic Constitution was enacted in The Federal Reserve Act of 1913, at the very start of the Wilson presidency. By the 1920s, the independent bank had expanded into multiple open market operations (prefacing the Great Depression) and finally achieved its early leader’s goal of freeing banking from the outside limit of a gold standard, first under New Deal’s Franklin Roosevelt in 1933 (excluding individual gold trading), and then ending even governmental use of gold as an exchange reserve currency in 1972, delinked from any external standard.

For a half-century the Wall Street Journal has warned that having the U.S. dollar replace gold as the world fallback reserve currency has short-term advantages. Treating paper as a final store of value allows recipient banks to create additional reserves, building an inflationary bias into all banking. This monetary duplication can be traced to both the 1929 and 2008 crashes, and there is no reason to think that it will not do the same by 2024. Fed magic cannot prevent it, as its leaders basically admit themselves. The world for which the Fed tools were designed “has long passed” and it is time economists seriously consider turning the Fed into a real bank limited by some outside standard of value, evaluating the alternatives rather than making it up on the fly.  Abolishment would be difficult, but any fundamental institutional reform must include a real (rather than exchange) gold and materials standard that would practically speaking put an end to supporting unlimited Treasury debt.

The Fed, of course, would not feel the need to monetize trillions in debt if the president and Congress did not create it with spending far exceeding income — so a balanced budget constitutional amendment to place institutional limits on Congress should be in the plan too.

But a balanced budget is not enough since much of the damage is done by national government institutions that force the private sector to follow regulations that indirectly pay for government policies. This has created an administrative state that regulates both market and society, displacing private functioning by rules set by its national coterie of expert government bureaucrats. The result is “dark matter” regulation from the top that no one understands or can follow, making the regulated easy prey to bureaucratic second-guessing and abuse. The only solution is massive deinstitutionalization of the administrative process through deregulation, which can be successful as even a relatively few deregulatory reforms passed under Donald Trump were able to bring the prolonged 2008 recession to an end.

The Competitive Enterprise Institute calls the existing regulatory morass the 10,000 Commandments and puts their cost to the economy at $1.9 trillion annually. The fundamental problem is that the government sets the rules and is the umpire. To separate the institutional functions, government commission, and agency activities such as certification, inspection, monitoring, and product testing, functions should be transferred to independent private institutions (like Underwriters Laboratories and Consumers Union). These could create standards, but be stripped of enforcement. The resolution of claims would go before common law tort courts, which could settle cases between private claimants rather than setting the powerful state against ordinary citizens.

4. Give power back to the private sector and local governments.

Washington finds it especially difficult to regulate social as opposed to economic institutions, such as educational ones. Article I Section 8 of the Constitution listed only 18 or so functions for the national government and left those not specified to be handled by states, localities, and private sectors, where they could be handled more efficiently and humanely. It is hard to ignore that both experts and the public do not think this centralization works today. Its multi-level bureaucracy has no device to communicate from top to bottom to know what is going on with the real people below. Decentralization and privatization are the only options, and polls show that people think they work better. President Reagan insisted that by doing fewer things, the bureaucracy would actually do the remaining few more effectively.

Education would be a perfect place to begin since the national government has been given no Constitutional role, but the federal Department of Education now dominates it. But education simply does not work from the top. It is by nature local, even face-to-face, as was so well illustrated in the general failure of distance learning during the pandemic, especially for the poor and young.

5. Increase the number of representatives in the House.

The central democratic institution of Congress is supposed to represent ordinary people in Washington, but no longer seems able to do so. Districts are much too large and make it too easy for legislators to play interests against each other. In the original idea of the House of Representatives, the ratio of population to district was 30,000 to one rather than the 200,000 to one that we had at the beginning of the 20th Century and the 700,000 or so to one that we have today. Keeping the original ratio would overwhelm, but there are only 435 members now, and there are options. For example, the House in tiny New Hampshire has 400 members, and the British House of Commons has 650. Relative to population, using the British House of Commons as the benchmark would increase the U.S. House to around 2,000 members. Five times more representatives would allow members to do the work themselves rather than passing responsibility to overpaid bureaucrats.

6. Rein in the power of the Supreme Court.

At the top of America’s institutions, even the Supreme Court needs institutional reform and limits. With minimal congressional involvement in policy details today, courts have become de facto legislatures of last resort. Much of this has emanated from broad interpretations of the 14th Amendment, which itself allows Congress to limit such reach, and it should, especially to narrow the definition of interstate as actually passing over state borders. Article III, Section 2 of the Constitution even directly allows Congress to limit the appellate power of the Supreme Court to review matters that are best left to states or other institutions, and such options should considered as alternatives to one-size-fits-all decisions. The Court interpreted providing for the “general welfare” as national, but after fifty years and trillions spent, only one-third of African American children live in families headed by two parents, whereas census data one generation after slavery found a slightly higher percentage of blacks married than whites.

Even private institutions should be reviewed in any plan. The media’s glorification of identity and woke politics and hyper-criticism of traditional family values have led many to demand media regulation. Justice Clarence Thomas was on a wiser course compatible with freedom of speech when he proposed relying on libel laws instead, as do most democracies such as Great Britain. He would modify the Supreme Court Sullivan decision to narrow media protection (requiring “actual malice”) from libel charges only from well-known public officials and limit “the sweeping immunity” courts have given to the media to protect it from its libeling “misconduct” against average citizens. If some talking head simply lies, they should be held liable. If media is forced to be accurate or face costly lawsuits, perhaps they might try harder.

These are a few fundamental institutional reform priorities — and there are more — that might be possible after a sweeping victory such as the Democrats enjoyed following the 1964 election. But intellectuals and think tanks need to flush out the plan details soon to take advantage of the opportunity. It is ambitious, but when fate is running with a movement, great things can happen.