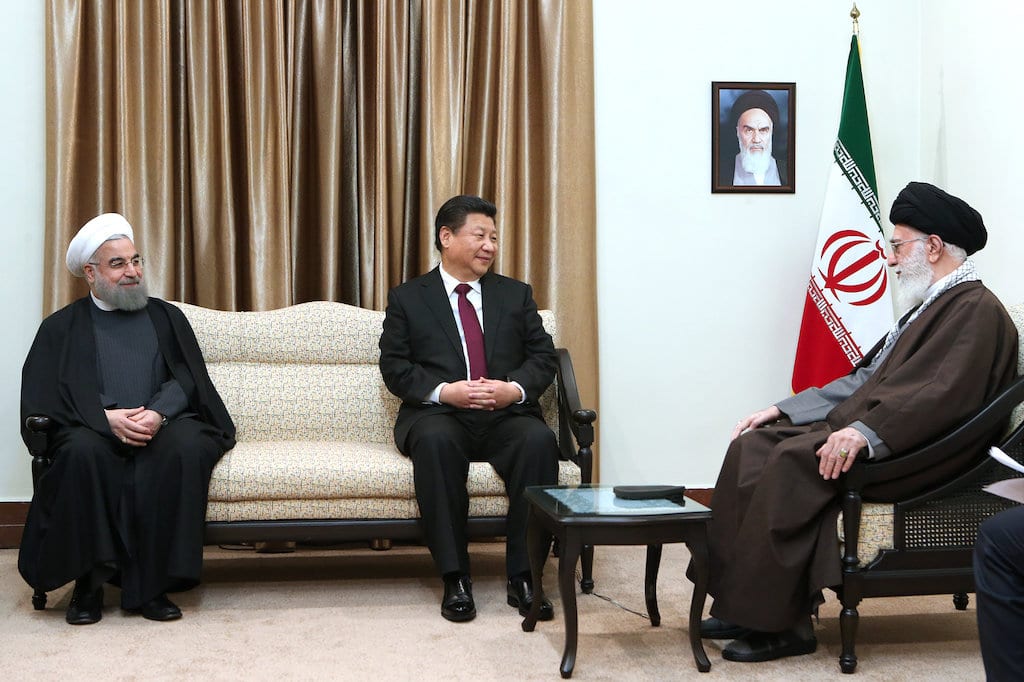 Meanwhile, Chinese aggression all around the world is taking new and ever more dangerous forms. From the minor (Ecuador is trying to deal with a Chinese fishing fleet poaching off the Galapagos Islands) to the major (China’s recent oil deal with Iran), Xi Jinping’s regime is steadily raising the pressure on us and our allies. And it is willing to partner with the world’s principal terrorist nation to do so.

Much has changed since President George W. Bush labeled Iraq, Iran, and North Korea an “axis of evil” in his 2002 State of the Union speech. Our ill-advised war in Iraq toppled Saddam Hussein but turned Iraq into an Iranian satrapy.

Iran’s economy, thanks to President Trump’s economic sanctions, is a disaster. It has suffered a huge number of COVID-19 infections and deaths. Perhaps as much as 30 percent of the population of Tehran has been infected. But it’s not poor enough to stop producing propaganda for the benefit of its disgruntled population and the amusement of the world.

The funniest video I’ve seen in recent weeks shows Iranian Revolutionary Guard Corps forces attacking a wooden mock-up of a U.S. Nimitz-class aircraft carrier, which even had wooden mock-ups of fighters on its deck (here, second video down). As part of Iran’s annual “Great Prophet” military exercises, small speedboats swarmed the carrier, missiles were shot near it, and IRGC troops stormed the “ship.”

Needless to say, the Iranians would be rather less successful in attacking a real U.S. carrier. The U.S. Navy, polite as usual, congratulated Iran on its ability to construct target barges. But while we take comfort in our forces’ abilities, we can’t ignore China’s growing alliance with Iran. They are busily creating a new axis of evil.

Oil-hungry China is willing and eager to violate our economic sanctions anywhere, so, as we should expect, it is effectively buying Iranian oil fields to save the ayatollahs from us.

About 50 to 70 percent of Iran’s oil is shipped to China despite our sanctions. Last year, China imported over 500 million tons of oil, about 10 million barrels a day. At its peak — the most recent figures are from 2019 — monthly shipments from Iran were about 800,000 barrels per day, the rest coming from Saudi Arabia and other oil states.

According to a significant report that has not received the notice that it is due, in late July Iran awarded two huge contracts worth a total of about $1.6 billion to China to develop two major oilfields in Iran. Iran, of course, lacks the money to pay these contracts, so the money will come from China in the form of loans or gifts.

The effect of these deals, which began with less formal arrangements made in 2016, is to weld the two nations together economically. At this point, it’s unclear how close they intend to be strategically.

The UN’s arms embargo against Iran will expire in October. China and Russia are blocking any extension of it because they want to sell advanced weapon systems — fighter aircraft, ships, missiles, and more — to Iran. As I’ve written earlier, China and Russia will finance those purchases with loans and outright gifts to cash-poor Iran.

The economies of both Russia and China have been greatly weakened by the pandemic. The more quickly they recover, the faster they will be able to finance those weapons purchases by Iran. That, obviously, will further endanger Israel and every U.S. interest in the Middle East. China’s — and North Korea’s — ballistic missile capabilities are threatening our allies in the Pacific Rim.

Japan, justly frightened by the missile capabilities of China and North Korea, is considering whether it should establish a “first strike” capability of its own.

Because it lacks nuclear weapons, even if Japan tried to create such a capability, it would lack credibility. By even considering the creation of a “first strike” capability, Japan is questioning the validity of America’s “nuclear umbrella,” which has protected it since the end of World War II.

Other U.S. allies have the same doubts, and Trump isn’t assuaging them, though he should. The withdrawal of 10,000 U.S. troops from Germany is, again, raising doubts about our commitment to our mutual defense obligation under the NATO Treaty. It shouldn’t, but the reality is that the withdrawal does just that. The difference between Japan and the NATO nations is that most of the latter — especially France and Germany — are content to complain rather than invest in their own defenses. Trump complains about their defense investments but is unable to change their path. They refuse to recognize that we are in a Second Cold War, with both China and Russia.

During the First Cold War, the Soviet Union opposed us everywhere it could, from Eastern Europe to India with the Middle East in between. As I wrote in May, we are decades into a Second Cold War with China, which is doing the same.

A column in the July 30 Financial Times risibly argued that the China–U.S. relationship isn’t a Cold War because it is a struggle between states, not between systems of government. The author, a Trump-hater, evidently doesn’t want to understand that our system of constitutional democracy is fundamentally different from China’s oppressive communism. There are many Democrats — including Joe Biden — who refuse to recognize that fact. Fortunately, the Trump administration is not in that category.

The forced closure of China’s Houston, Texas, consulate was the direct result of the fact that it was an epicenter of Chinese espionage against us. There are 2,000 FBI agents devoted to counterespionage against China. FBI Director Christopher Wray said that the FBI opens a new counterespionage case every 10 hours. Wray has also said that China was trying to become the world’s only superpower “by any means necessary.”

In a short string of July speeches, leaders of the Trump administration have tried to take the rhetorical and sanctions battle to China.

Secretary of State Mike Pompeo said that Xi Jinping was engaged in a battle for global supremacy and that America and other democracies have to fight back. Barr’s speech was to little avail.

China’s oil deals with Iran are analogous to its “Belt and Road Initiative,” which is “debt-trap diplomacy.” By sending people into Iran to develop its oil fields, China is emplacing — as it always does — members of its armed forces in every job from top executives to grunt workers. By the BRI initiative, China is doing the same in countries such as Pakistan, where it is building air fields and naval bases to control part — or all — of the Arabian Sea.

Mr. Pompeo has declared, correctly, that China’s claims to territory in the South China Sea are illegal. Short of a massive naval buildup around China — which is beyond our capability — or even a shooting war with China, there’s little that can be done about those claims or China’s threats to seize more territory around the South China Sea.

We lack the capability and the will to contain China. Its strategic relationship with Iran is a strong indication of both nations’ willingness to be more aggressive than they have in the past against American interests everywhere.

Trump is preoccupied with the election, which is now fewer than 100 days away. It is questionable if Trump will focus on this new axis of evil if he is reelected. But it is unquestionable that if Trump loses, Joe Biden won’t.