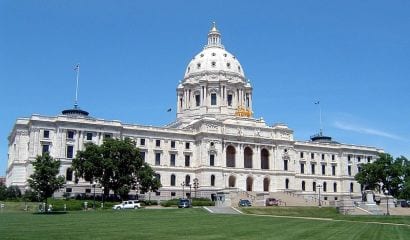 Everyone except President Barack Obama understands that the federal government has a spending problem. Yet Uncle Sam gives away more than $600 billion to states and localities every year. It’s time to turn off the spigot, implementing the Reagan vision of transferring program responsibilities and revenues sources away from Washington.

The original governmental system for the newly independent colonies envisioned states funding the national authorities. There was no enforcement mechanism, so the Articles of Confederation didn’t yield a very effective continental government. But the principle made a lot of sense. The best way to constrain national politicians was to make them dependent on local folks for money. No extravagant usurpations of the liberty of citizens or authority of states.

The Articles were tossed aside when the Constitution was ratified. It provided the so-called federal government with independent sources of revenue, but still envisioned states playing the dominant government role in citizens’ lives. The national government primarily relied on tariffs and the proceeds of land sales for money. Washington had no seemingly endless source of cash either for its own use or for distribution to others.

Alas, the Civil War demonstrated the truth of Randolph Bourne’s axiom that “war is the health of the state.” The national government avidly pursued new revenue sources to satisfy its voracious appetite for cash to fund the invasion of the southern states. Although federal outlays dropped when the conflict ended, federal memories of the joy of taxing did not. By the early 20th century Washington had a vast new source of money, the income tax, and ever higher expenses, including a big war overseas, an economic crisis, and another, even larger global war. Authority, prestige, and resources all flowed to Washington.

Although the number of programs and amount of outlays have varied over time, the federal role has expanded over time. Inter-governmental subsidies increasingly have concentrated in a few areas. The Congressional Budget Office recently reported: “Federal grants for health programs, primarily Medicaid, have grown rapidly, and grants for programs and initiatives not related to health — such as those associated with income security, education, and transportation — have also increased, albeit at a slower rate.”

According to CBO, as of 2011 there were more than 200 grant programs administered by 30 federal agencies costing $607 billion. Uncle Sam’s abundant largesse doesn’t come cheap. Observed CBO: “Those funds accounted for 17 percent of federal outlays, four percent of gross domestic product (GDP), and a quarter of spending by state and local governments that year.” In 1960 inter-governmental grants accounted for 7.6 percent of federal expenditures and 1.4 percent of GDP.

Almost half of current transfers, $293 billion, go to health care, principally Medicaid, the shared program which threatens to bankrupt both national and state governments. Welfare, officially styled “income security,” accounts for another $114 billion. Education, a one-time quintessentially local activity, consumes $89 billion. Another $61 billion goes for transportation, a function which — other than some genuinely interstate facilities — also should be the responsibility of states and localities. Then there’s $50 billion for everything else.

Washington places varying numbers of strings on the cash being handed out. Block grants are essentially free money, as least so long as the cash is spent within broad program areas. Categorical grants may set stricter criteria while still leaving the exact funding initiative up to the grantees’ discretion. Project grants are more likely to be tied to specific activities.

Some federal subsidies are animated by the belief that states and localities are better at handling functions which require knowledge closer to home. Other grants may be intended to encourage experimentation among states which otherwise would not have the money, or be willing to raise the money, for that purpose. In some cases Congress may genuinely believe that internal state activities yield spillover benefits to the nation and thus warrant federal support.

However, far more important are the least benign motivations. The first is to get states to go along with federal priorities. Washington prefers simple mandates, but that generates substantial opposition from the jurisdictions doing the paying and may fail to pass constitutional muster. The second is blatant though indirect income redistribution. Federal grants allow national politicians to “spread the wealth around,” or, as CBO more delicately put it, “use the broad federal tax base to redistribute resources among communities and individuals.”

This is bad policy for several reasons. First, Uncle Sam is bust. He has no money to give away. In effect, the federal government is borrowing to fund all of these grants, which means national taxpayers will end up paying interest in order to transfer their own money to state and local officials. From 2009 through 2012 Washington ran up annual deficits exceeding $1 trillion. This year the deficit is “only” going to be $845 billion. There is no money for Washington to give away.

This is unlikely to change. Even with the sequester, CBO figures that the deficit will only drop to $430 billion in 2015 before heading back up toward $1 trillion again by 2023. Accumulated red ink over that period will run at least $7 trillion and perhaps nearly $10 trillion. Where is Congress supposed to get $600 billion annually to hand to other governments?

Second, separating responsibility for raising money from spending it creates perverse incentives. No doubt, states and localities are happy to get “free” money. But as most of us can attest from personal experience, one is not likely to be as careful spending other people’s money as spending one’s own. Requiring the grantee to contribute only moderates the problem. If no one entity is comparing both costs and benefits, there still will be a bias toward more spending on projects worth less than the combined contribution of the separate jurisdictions.

Third, states and localities naturally will spend less if the federal government spends more. After all, why tax your own citizens when someone else’s money is available to spend? In many cases grantees simply stop spending if the national government is willing to do the job for them. Complained Steve Eide of the Manhattan Institute: “Federal grants for education and transportation have been found to encourage state and local governments to scale back their own commitments to these priorities. So you get the worst of both worlds: no net funding increase and less accountability.”

The relationship isn’t always simple, as CBO acknowledged; some grants require states and localities to spend more to get Washington to spend a lot more. However, the agency noted that even matching and maintenance of effort requirements “may not diminish the ability of state and local governments to use federal grants to replace their own revenues” because “states can adapt to the provisions of some grant programs in ways that increase the funding they receive from the federal government.”

Fourth, Washington’s abundant, if borrowed, resources have enabled it to increasingly subjugate states and localities. Admittedly, the submission is technically voluntary, purchased through national taxpayers’ money seized by federal officials. However, Uncle Sam’s ability to purchase compliance from states and localities unwilling to stand on principle has malformed the constitutional system. Why should the national government decide on speed limits, drinking ages, and welfare payments for every city, town, and village across the country?

The Supreme Court’s lamentable decision in National Federation of Independent Business v. Sebelius has made the problem even worse. Chief Justice John Roberts was applauded by the usual leftish establishment elites for torturing the law to uphold Obamacare. However, he and a majority of the Court struck down as “coercion” the congressional decision to expand required state coverage under Medicaid; failure to comply was to result in the loss of all Medicaid grants.

Although applauded by many on the Right, the opinion means Congress cannot control the use of federal money. Never mind whether expanding Medicaid made sense. Surely national legislators have the right to set conditions for the acceptance of money from national taxpayers. Yet the Court essentially said that the greater the grant, the less control Congress has. It becomes to look like an “entitlement” — once relied on it can never be ended. Until now it is obviously would have been constitutional for Congress to abolish Medicaid today and re-create it, with expanded benefits, tomorrow. But after NFIB one wonders if Congress could do so without a court fight.

The even deeper concern, however, should be the integrity of the states. If they really have become so hooked on federal money that they feel helpless and unable to assert their institutional prerogatives, then federal grant-making undermines America’s constitutional system, particularly the commitment to separate and limit government powers. The fact that no state is willing to abandon the ever more expensive Medicaid system suggests that states no longer operate as genuinely independent political entities.

President Ronald Reagan is remembered for ending revenue sharing (under which Washington wrote checks with no conditions) and consolidating many categorical grants into less restrictive block grants. Both were worthwhile accomplishments. However, his ultimate vision was more far-reaching. He advocated turning back responsibilities and resources, or funding sources, to states and localities.

He understood that decisions are best made when one person or organization both incurs the costs and reaps the benefits of an action. He also recognized that the federal government had seized too much authority, taking money away from and making decisions for governments better positioned to act on a range of issues. Only returning both responsibility and revenue would address this problem.

Congress could begin the process by scaling back inter-governmental grants with the ultimate objective of ending federal transfers to states and localities. As for revenue, legislators should start by ending all federal excise, estate, and gift levies, leaving those to states. Over time lower federal income tax rates also would leave more room for states to tax.

Federal spending must come down, which requires reducing outlays on most everything, including grants. Doing so also would better align responsibility for outlays and revenues. The sooner Congress begins the better for America’s fiscal and constitutional health. A return to real federalism grows ever more urgent.