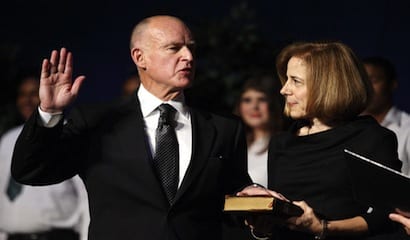 California, the ninth-largest economy in the world, is a profoundly troubled state. It remains badly broken in many fundamental ways even as the national economy slowly but steadily emerges from the Great Recession and as cash from November’s voter-approved tax hikes pours into the state treasury.

The tax increases have, to be sure, provided short-term budgetary relief, even a multibillion-dollar surplus, after years of multibillion-dollar deficits that were papered over with phony economic assumptions, accounting gimmicks, massive borrowing and raids on the treasuries of school districts and other local governments. Indeed, state Controller John Chiang says that April was the first month in six years in which the state was able to pay its bills without raiding internal funds.

This flood of new cash has cast a glow over Sacramento — a giddiness that all is well again in the Golden State.

But compelling arguments can be made that the tax hikes were the worst thing that could have happened. First, they did nothing to provide the broader structural economic reform needed to prevent severe long-term financial distress and the degradation of basic public services that would go along with it. Second, the income tax hikes, which targeted the wealthy, only worsened California’s vulnerability to destructive boom-and-bust budgeting should an economic downturn strike again. And third, the false sense of financial security that they spawned is leading the Legislature to continue to blithely ignore the reality and the severity of many core problems.

Shockingly, California now has the highest rate of poverty in the nation, measured at 23.5 percent, significantly higher than any of the states of the Deep South.

The state government is awash in debt, hundreds of billions of dollars, much of it stemming from the Cadillac salaries, pensions and retiree health-care benefits paid to state employees. The pension reform proposed by Gov. Jerry Brown and enacted last year was helpful, but it was a small solution to a giant problem.

The state that historically was among the last to fall into recession and among the first to pull out it, has flipped. In the previous three national economic recessions, the California job market has fallen farther and taken longer to recover than the U.S. market. Unemployment in California today, though thankfully falling, remains among the highest in the nation. Of California’s 58 counties, 27 are burdened by unemployment at or above 10 percent; four of them have a jobless rate higher than 15 percent. In Imperial County, the jobless rate in April was 24 percent. It was 19.9 percent in the Central Valley’s Colusa County.

The educational performance of California students now ranks near the very bottom as measured by the National Assessment of Educational Progress, known as “the nation’s report card.” On the state test for 2011-2012, only 56 percent of students scored at the proficient level or above in English. Even fewer, 51 percent, were proficient in math.

The state lost 33 percent of its industrial base from 2001-2012, declining 11 percent more than in the United States as a whole. The state is now increasing manufacturing jobs at an anemic rate that lags far behind that of the nation.

Once the national leader in export growth, California has been losing ground for more than a decade and is now a distant second to Texas in total exports.

State and local government regulatory agencies are strangling the efforts of small and large businesses to expand. Evidence is abundant that many companies are leaving the state or, more commonly, deciding to expand elsewhere rather than here at home in a state that consistently ranks at or near the bottom of surveys of the business climate. Even San Diego, which likes to promote itself as “business friendly,” was given an “F” for friendliness to small businesses for the second year in a row in one survey this spring.

Environmental regulation, more restrictive than anywhere in the country, only adds to the burdens on business. Under AB 32, the state’s landmark legislation to combat global warming, energy costs for California manufacturers are projected to be 50 percent higher than any other state. The simplest of permits can take weeks or months. Environmental “greenmail” lawsuits against development projects are common.

Beyond the metastasizing cancers afflicting state government, many local governments also are in financial peril. Stockton and San Bernardino are bankrupt and Vallejo recently emerged from bankruptcy. Of the three, only San Bernardino has attempted to address its pension debt. Many other local governments struggle to stay out of what municipal finance experts bureaucratically refer to as “service delivery insolvency” — the point at which a government is considered essentially unable to effectively deliver services to its people.

Ironically, some national pundits argue that California is not only on the mend but is a model that other states and the national government should follow. They argue that elimination of the budget deficit is evidence that the only real problem here has been conservative anti-tax ideologues who have repeatedly stopped the state from implementing what the pundits view as necessary tax increases.

As New York Times columnist Paul Krugman wrote in his “Lessons from a Comeback” column in March, “California isn’t a state in which liberals have run wild; it’s a state where a liberal majority has been effectively hamstrung by a fanatical conservative minority that, thanks to supermajority rules, has been able to block effective policy-making.” He described those who point out the troubling trends detailed above as “California bashers.”

To his credit, the governor’s budget plan calls for gradual pay-down of $27 billion that the state still owes local schools and other programs raided in recent years to balance the state’s books.

But Brown and the Democrats under the Capitol dome rarely note that the $27 billion is but a pittance of the state’s total IOUs.

The unfunded liability for the state’s public employee pension and retiree health care systems is officially estimated at more than $265 billion. Unofficial expert estimates based on more realistic economic assumptions raise that figure above $465 billion.

Add to that some $80 billion-plus in existing bond debt and hundreds of billions more in deferred maintenance and needed improvements to the state’s vast infrastructure.

Under former Gov. Pat Brown, the governor’s father, in the 1960s the state spent 20 percent of its budget on infrastructure. These days that number, including local bond measures, is around 3 percent. By shifting priorities away from the basic freeway and water systems that enable the state’s economy to grow, and toward unsustainable luxuries such as six-figure pensions and lifetime medical benefits for public employees, the state’s public services have become noticeably shoddy. The problems show up the most in troubled cities that have cut back on policing, parks and other public services as they struggle to pay for union-backed benefits.

That’s why some progressive Democrats — including a few who will be writing in this series — have embraced pension reform and other efforts to fix California’s broken system. If we don’t adopt fixes, they argue, there will be too little money left to fund the programs they truly care about.

Lt. Gov. Gavin Newsom is one of the few Democratic leaders to openly acknowledge the depth of the problems.

“There’s no plan to reorient our efforts to be more aggressive, to market and promote not just new business growth and recruitment, but existing businesses that want to continue to grow in California. … You can’t change the trajectory of the economy in the state without a movement, a foundational acknowledgment that something dramatic needs to take shape.”

Asked in an interview whether he believes there is a connection between California’s tax structure and the weak state of the state’s overall economy, Steinberg replied:

“I don’t think so. We hear these stories, mostly anecdotal, about capital fleeing or people deciding to move their businesses elsewhere,” Steinberg said. “We see (Texas Gov.) Rick Perry and people like that flying their flag. But I don’t think the evidence backs it up, at least to the extent people express.

“We still have more venture capital in this state than any other state in the country. Our unemployment rate is too high, partly from a growing population (but) we still have added over 300,000 jobs over the past year. Despite some of the terrible cuts to our higher education system, we still have a higher education system that is the pride of the country and is often at the center of much of our science and research advances.

“So I just think that (the problems are) overstated.”

The facts, we argue, say otherwise.

And, needless to say, so do California’s vastly outnumbered Republican leaders, whose minority status is increasingly pushing them toward political irrelevancy.

“These guys just don’t get it,” said Assembly Republican leader Connie Conway. “When are they going to get it? When this place is destroyed?”

Sen. Mark Wyland, R-Solana Beach, the senior member of San Diego County legislators in Sacramento, said simply, “That’s absurd,” in response to a question about the comments of Brown and others that the state is now on a financial comeback.

“I liken what’s occurring in California to a slowly turning vise. And the big things (being squeezed) in the vise are the economic climate, job growth, and the education system.”

Furthermore, Democratic leaders often fail to grasp broader problems that contribute to a sense of discouragement among many people who live here. Debates about Big Labor aren’t just about money but about privilege and power — about an interest group that seems to dominate every level of government in California. And people who labor in the state’s rural and inland areas find it increasingly tough to earn a living as rules and regulations advocated by coastal elites halt economic activity in the name of environmental protection. Many Californians rightly complain about the way the never-ending sea of Sacramento regulations and Nanny State rules erode their freedom.

Obviously, none of the problems facing the state or local governments developed overnight.

Also obviously, there is anything but a bipartisan consensus around solutions. There is only the blue-red partisan divide.

But there are solutions out there, even if the political leadership tends to constantly put them off to another day.

Meanwhile, the California Dream is slumbering into nightmare.

There is time to wake up. But will we?