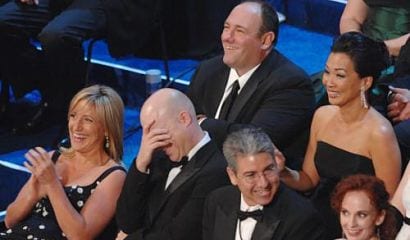 TV Guide and the Writers Guild of America released its “101 Best Written TV Series of All Time” earlier this week. Duck Dynasty, Amish Mafia, and Teen Mom 2 failed to make the list.

Hollywood increasingly awards the narrative a smaller role. On the big screen, scripts yield to explosions and computer effects in spectacles mislabeled films (see Fast and Furious 6, The Avengers—or better still, don’t). On the small screen, talent shows and reality television appear as part of a clever conspiracy by corporate executives to avoid paying writers and actors. So, appreciating writers at a time when we clearly do not appears as a bit of a plot twist.

Naming The Sopranos the best writing in the history of television surely doesn’t. Critics looked at the series the way Tony looked at Artie Bucco’s food (and Bada Bing employees). Lauding The Sopranos as the best is a bit like proclaiming your local MSG-drenched Chinese-food hut America’s gourmet par excellence. You can’t eat enough of it when it’s on the plate. But after devouring the fare, it leaves an empty and hungover feeling. Sure, the show offered arresting characters indelibly etched on popular culture (Richie Aprile, Phil Leotardo, Ralphie). But it’s not like mafiatainment suffers in this area. There are at least a half-dozen films in the genre that eclipse The Sopranos.

Writing, not acting or directing, stood out as the program’s Achilles’ heel. If the name “Kevin Finnerty” rings familiar, then you surely grasp this. Deconstructionist nonsense, in which the writers lazily depended upon the viewers to write scripts for them, became the calling card of too many episodes. Because no one understood the amorphous stories, everyone understood them as deep. Only they weren’t. I stopped believing in The Sopranos the second the finale kicked in with “Don’t Stop Believing.” In its unsatisfying, opaque conclusion, the show resembled another quality program that made the list, The Prisoner (#90). The Sopranos’ headscratcher certainly had nothing on Newhart’s jawdropper.

The best-written television series have all been anthology series. They are the only programs in which writers star. Perhaps this is why so few of them remain. The WGA/TV Guide list highlights a few great ones: The Twilight Zone (#3), Alfred Hitchcock Presents (#79), and Playhouse 90 (#65), whose 1957 offering “The Comedian” unforgettably showcases Mickey Rooney’s talents playing Milton Berle with a mean streak. But even a list compiled by writers edits out deserving writers.

The Ray Bradbury Theater, Studio One, Ronald Reagan’s General Electric Theater, and Steven Spielberg’s Amazing Stories amazingly didn’t make the cut. Neither did Boris Karloff’s Thriller, which featured ten episodes penned by Psycho writer Robert Bloch. Roald Dahl’s Tales of the Unexpected relied on the talents of one of the 20th century’s great short-story tellers. But the judges omitted the Thatcher-era British gem. HBO’s Tales from the Crypt mined its stories almost exclusively from postwar horror comics. Even people who cringe at horror—its enthusiasts occasionally do—admire the writing.

Standing behind so much of great television pop culture is postwar pulp culture. Bloch, Bradbury, Richard Matheson, and so many other scribes who lent their genius to the idiot box started out by writing for such throwaway keepsakes as Weird Tales, Galaxy Science Fiction, and Dime Detective. Amazing Stories even paid homage to the pulps through its title. Unfortunately, the pulps’ gift to the tube wasn’t reciprocated. Depending on screens to do the pleasant work of their imaginations for them, viewers ceased being readers. The pulps became pulped. As a result, the fiction on television suffered terribly.

The strange irony here is that critics initially regarded pulp fiction as gauche pseudo-literature read by friendless kids, blue-collar rubes, and chronic masturbators. When Time labeled Ray Bradbury “the poet of the pulps” in 1953, readers understood it as a backhanded compliment. But midcentury snobs got too caught up in the packaging of literature rather the literature itself. We risk falling into that arrogance trap when we dismiss anything that airs on television as lowbrow. But in a culture that increasingly encounters stories from a visual medium, storytelling as an art necessarily loses something. So we’re left thinking that Will & Grace (#94) is great writing.