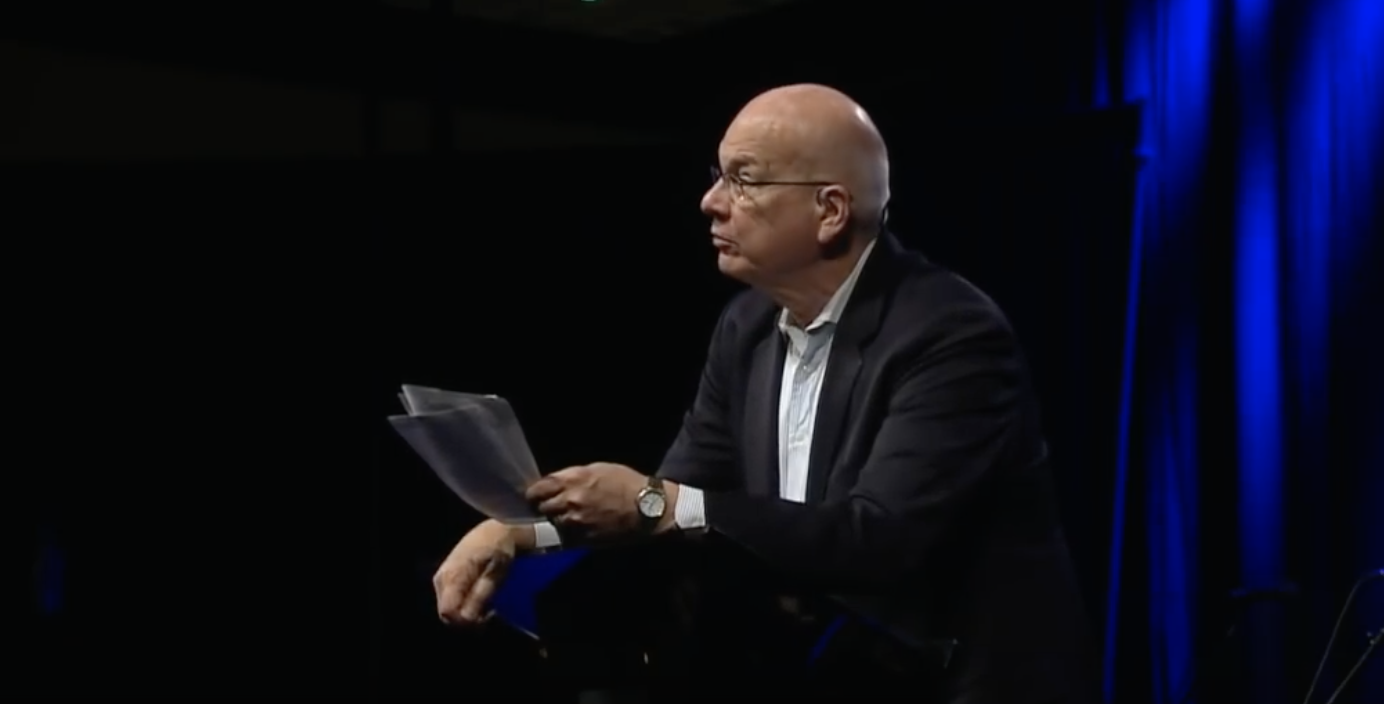 More Politics
Sign Up to receive Our Latest Updates!
Register
Hot Off
The Press
Public Depravity
Outlawing ‘Sexist’ Toy Displays: California’s Latest Loony Crusade
by Doug Bandow
Loose Canons
The Strangelove Letter: Even the Dems Don’t Want Biden Near Nukes
by Jed Babbin
Daily Folios and Consecutive Sentences
On ‘People of Color’ and ‘Systemic Racism’ — And Why I Am Sick of Hearing It
by Dov Fischer
Special Report
Derek Chauvin’s Trial: Countdown to a Kangaroo Court
by George Parry
New York Special
From the Life of Mannequins
by Nic Rowan

When editors at The American Spectator asked me to write a column for their exceptional magazine about the liberalization of the American church in the age of Black Lives Matter, Antifa, and what parades as social justice, I liked the idea. My mind had been ranging over that ground for some months, and their call was confirmation that the idea was worth pursuing. But rather than an article addressing that topic in merely impersonal, philosophical terms, I suggested giving it a face: Pastor Timothy Keller.

For the uninitiated, Tim Keller is the founding pastor of Redeemer Presbyterian Church in New York City, a successful confessional church in a place many Christians regard as the heart of darkness. Keller is also a best-selling author who does not shrink from dipping his toes into political waters as so many ministers do. He is something of an unofficial pope to a large segment of the evangelical Christian population. His influence on this demographic is vast, and he leverages it in books, interviews, and a robust social media presence. For our purposes, the question is this: is it a good influence?

Over the course of his career, Tim Keller has been a light for the Christian faith in the pulpit. He has also written several helpful books. Yet, bizarrely, he has recently embraced the so-called social justice movement. In a series of articles and tweets this year, Keller, confusing Christianity with the Democrat presidential platform, pronounced authoritatively on issues ranging from “systemic racism” to the “corporate guilt” of white America. All of this, of course, was simply a precursor to his inevitable conclusion:

when it comes to taking political positions, voting, determining alliances and political involvement, the Christian has liberty of conscience. Christians cannot say to other Christians “no Christian can vote for … ” or “every Christian must vote for … ” unless you can find a biblical command to that effect.

Such a position would seem reasonable in, say, the 1916 presidential election between incumbent Democrat Woodrow Wilson and Republican Charles Evans Hughes. But in 2020, a year when Democrats represent all that is unholy? I can think of several biblical commands that made the choice for any Bible-believing Christian absolutely clear in this election. I mean, would Jesus endorse a radical pro-abortion and pro-infanticide policy; every sordid sexual agenda, even the sexualization of small children; a complete disregard for the rule of law; and open hostility toward His followers? I don’t think so. 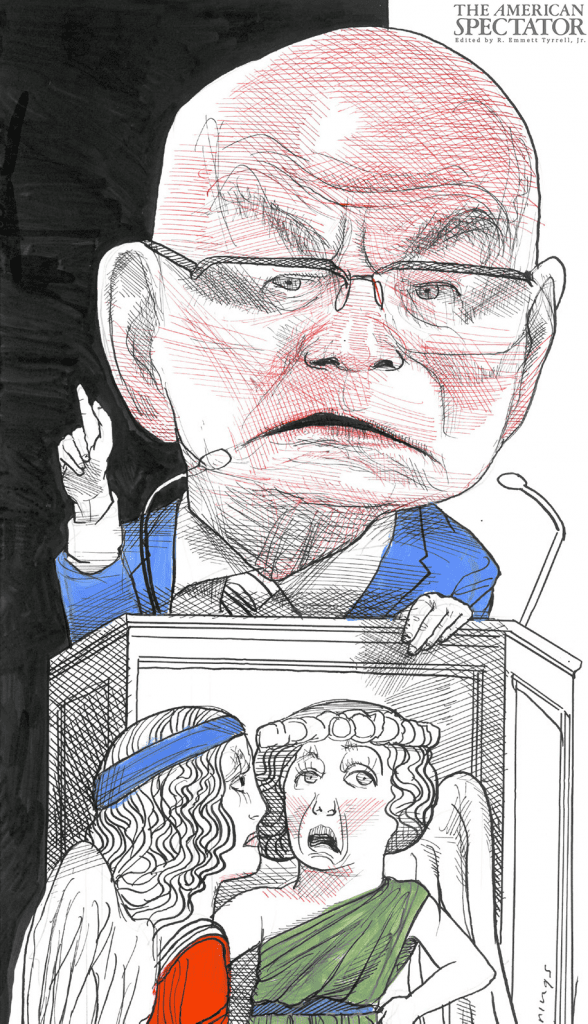 Unfortunately, Keller is not an evangelical anomaly. While he was giving theological justification to those who would betray their faith and defect to the opposition with their votes, popular Baptist pastor John Piper was encouraging Christians not to vote at all. In a recent blog post, he maintained that Republicans aren’t morally rigid enough. Whipping out the ultimate tool in the pastor’s mystification toolbox, he employed biblical Greek to add authority to his case against President Trump. (Some pastors love to do this. It is their way of saying, “Don’t try this at home.”) Piper says the president is guilty of “unrepentant sexual immorality (porneia), unrepentant boastfulness (alazoneia), unrepentant vulgarity (aischrologia), [and] unrepentant factiousness (dichostasiai).”

One wonders how he knows Trump is unrepentant and why he is the one to blame for factiousness. Did the president concoct a Russia collusion narrative? Did he spy on Hillary Clinton’s campaign? Did he illegally use the FBI to push false evidence? Did he do anything justifying impeachment? Did he support the looting, burning, and rioting in our streets? Did he take money from China through a family member serving as a proxy? No. As for his vulgarity and boastfulness, I suggest Piper get out more. Trump is fairly typical of the chest-beating, plain-speaking businessmen one finds in places like New York, New Jersey, Boston, and Philadelphia.

I am reminded of a quotation attributed (perhaps inaccurately) to George Orwell: “People sleep peaceably in their beds at night only because rough men stand ready to do violence on their behalf.”

Orwell or not, the sentiment is true. Like many of those who do violence on our behalf for the sake of our freedom, Trump is a rough man. That’s too much for Piper. Oddly, Piper represents a segment of the evangelical population that demands his president bear the characteristics of a Mother Teresa. Does he make the same demands of his barber, his mechanic, his accountant, or his surgeon? One suspects not.

In July 2012, I was speaking at a youth retreat in the mountains of Tennessee when I received a call from CNN. It seemed that Chick-fil-A CEO Dan Cathy had publicly commented on the issue of same-sex marriage, and now the gay mafia was lining up to do both him and his restaurant chain as much harm as possible. Would I, asked CNN, be willing to offer the orthodox Christian perspective on homosexuality and defend Chick-fil-A in this controversy? After reviewing Cathy’s remarks and concluding that they were neither outrageous nor biblically incorrect, I agreed to the interview, and later that day I defended the Christian position on the network as vigorously as possible.

Shortly thereafter, former Arkansas Gov. Mike Huckabee called for Christians to mobilize and show their support for the embattled fast food restaurant with “Chick-fil-A Appreciation Day.” They did. Lines at the restaurant stretched for blocks. This event marked the first time in modern memory that Christians fought back rather than meekly submitting to the media and special interest bullies.

But not all evangelical Christians were supportive of the Home of the Chicken Sandwich. In an article for WORLD magazine, Barnabas Piper, son of John Piper, wrote that he was against Chick-fil-A Appreciation Day because, he said, it “clearly promote[s] an ‘us versus them’ mentality.” Thus, taking a stand was too divisive.

At the time, I was stupefied by these remarks and wondered how the elder Piper, whom I respected, felt about his son’s views. Now I know the apple does not fall far from the tree. Perhaps it had escaped the young Piper’s notice, but it is us versus them. Besides, Huckabee wasn’t asking Piper or other Christians to die for their faith. He wasn’t asking them to take to the streets and destroy property as protesters on the left so often do. He was asking them to do nothing more than eat a chicken sandwich and some waffle fries for Jesus. Has any protest in history been easier or tastier?

A generation ago, pop star Bonnie Tyler famously asked the question, “Where have all the good men gone?” Since then, the situation has only gotten worse, Bonnie. As C. S. Lewis noted, men in the Western world have largely been emasculated, and men in the Church are seldom an exception to this decades-long trend. To stand strong for one’s faith in Jesus Christ and push back at a culture that, in the words of Isaiah 5:20, “call[s] evil good and good evil” is today seen to be “divisive,” “unloving,” “bigoted,” and “intolerant.”

This is because evangelicals in the English-speaking world have confused Christ’s command to love others with being civil as if that were an attribute of God. (It isn’t.) As a consequence, a superficial, self-righteous, good-for-nothing pietism that prefers tone to truth and style to substance has displaced authentic Christianity in many of the roughly four hundred thousand churches in America. This doctrinal malpractice has given us a generation of men, Christian and otherwise, who are what Lewis called “men without chests.”

Don’t know the sort of Christians I am talking about? I’ll give you a hint. They are the sort who will, upon reading this article, take great offense at what I have written here and waste no time in letting me know it, but are not particularly offended by the sixty-one million children murdered in the holocaust of abortion since 1973, by universities that are incubators of radicalism, by Democrats who are compiling a “hit list” of Trump supporters, or by the godlessness of the Marxism they openly advocate, which has killed no less than 125 million people in the twentieth century alone.

Too many Christians today are risk-averse. They prefer the safety of the family life center to engaging the culture in any way that might cost them something. God forbid they might sacrifice their wealth or comfort, endure the social media mob, or be excluded from the neighborhood barbeque. To such Christians, the “woke” messages of pastors like Tim Keller and John Piper et al. are a justification to do what they were inclined to do anyway: nothing.

But that doesn’t strike me as Christian at all. C. S. Lewis called Christianity a “fighting religion.” Think on that. These days, such a statement strikes a somewhat absurd note with a generation that has never known war, privation, or suffering in defense of anything, much less of noble ideals. For them, Jesus has been reinterpreted to meet a lifestyle preference. One might wonder if they truly know him. Because when Jesus said to turn the other cheek, he did not mean to turn a blind eye. And the highest calling of a Christian is not to be civil; it is to be salt and light.

Larry Alex Taunton is a freelance columnist and the author of the just-released Around the World in (More Than) 80 Days: Discovering What Makes America Great and Why We Must Fight to Save It. You can subscribe to his blog at larryalextaunton.com and find him on Twitter @larrytaunton.