Loose Canons,Top Story Adam Schiff,Hunter Biden,Joe Biden,Politics,President Trump,Volodymyr Zelensky Whistleblowin’ in the Wind - The American Spectator | USA News and Politics
Menu
Loose Canons
Whistleblowin’ in the Wind
A hearsay complaint sets off another round of hysteria — even though the law is clearly on the president’s side.
by Jed Babbin
Wikimedia Commons (fragment) 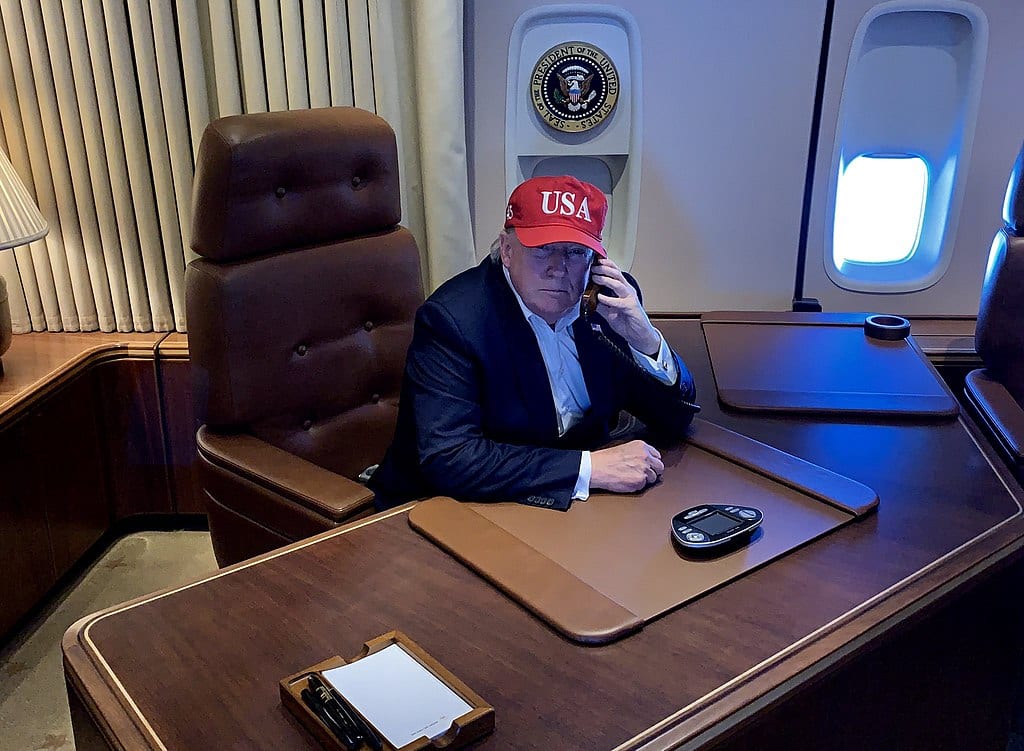 On July 25, President Trump had a telephone conversation with Ukrainian President Volodymyr Zelensky. During that conversation Trump repeatedly asked or demanded that Ukraine investigate the possible corruption that may have occurred while former Vice President Joe Biden’s son Hunter was a member of the board of directors of a Ukrainian energy company.

About a month later, an employee of one of our intelligence agencies made a classified complaint to the intelligence community’s inspector general Michael Atkinson — the specific allegations aren’t yet disclosed — that Trump had violated the law or abused his powers in that conversation.

The complainant — whose identity the inspector general is required to not disclose — reportedly did not have direct knowledge of the telephone call. The complaint was made on the basis of information — documents? telephone transcripts? — that the complainant received from others. In short, the complaint is hearsay, which makes it highly suspect.

The revelation of the existence of the complaint produced a near-orgasmic reaction among the Dems and their media cohort. They’re claiming it’s grounds to impeach Trump. Baloney.

Hillary Clinton crowed that it was proof that Trump was trying to get another foreign government to help him steal another election. Adam Schiff, chairman of the House Permanent Select Committee on Intelligence (HPSCI), said, “This involves something more sinister, something involving a serious or flagrant abuse or violation of law or misappropriation, and the IG underscored the seriousness of this, and also that this needs to be looked into.”

Schiff said this without having seen the complaint. He’s the same political hack who insisted for two years that he had evidence of Trump-Russia collusion to steal the 2016 election.

Schiff has threatened to sue to obtain the confidential complaint, which is being withheld by Acting Director of National Intelligence Joe Maguire on advice of the Justice Department. That withholding action is itself a cause célèbre among the Dem/media circus.

The reports — and leaks — are coming in quickly and almost at random with regard to their relevance. Let’s parse this out to see where it goes.

Atkinson, the intel community’s inspector general (IC/IG), apparently made the determination that the complaint is “urgent and credible,” which triggers a statutory requirement that it be turned over to the HPSCI and the Senate Permanent Select Committee on Intelligence (SSCI).

But Acting DNI Joe Maguire has refused to turn over the complaint to Congress on the basis of the legal advice he’s received. Maguire is caught in the middle. He’s being hauled into another Schiff hearing this week to explain his actions.

(I know Maguire — properly addressed as Vice Adm. Joe Maguire, U.S. Navy (Retired) — from the time he was president of the Special Operations Warrior Foundation, the military charity I’ve been helping raise money for over 20 years. Joe is a former SEAL, former Boss SEAL, and the straightest of straight-shooters. He is a great choice for DNI.)

Schiff and Atkinson clearly have mistaken what the law requires. Under the law, the IG has the authority and power to investigate matters regarding the conduct of the intelligence community, not the president. The relevant law — Title 50 U.S. Code Section 3033 — gives the IC/IG the authority to investigate:

… complaints or information from any person concerning the existence of an activity within the authorities and responsibilities of the Director of National Intelligence constituting a violation of laws, rules, or regulations, or mismanagement, gross waste of funds, abuse of authority, or a substantial and specific danger to the public health and safety.

That means the IC/IG can receive complaints about and investigate actions occurring within the intelligence community, not the White House. There is nothing in the law that empowers him to investigate presidential conversations with foreign leaders or anyone else.

In the context of defining complaints under the IC/IG’s jurisdiction, the law defines the term “urgent” to mean:

A serious or flagrant problem, abuse, violation of law or Executive order, or deficiency relating to the funding, administration, or operation of an intelligence activity within the responsibility and authority of the Director of National Intelligence involving classified information, but does not include differences of opinions concerning public policy matters. (Emphasis added)

Thus, there’s no IC/IG jurisdiction over complaints that allege improprieties in the White House or any other part of the government particularly when they are over differences of opinion on public policy, i.e., diplomatic and political matters such as conversations with foreign leaders.

Therefore, Atkinson’s acceptance of the complaint regarding Trump’s conversation with Zelensky is improper. The complaint may or may not be credible, but it’s neither urgent nor within the IG’s jurisdiction.

Acting DNI Maguire’s lawyers and the Justice Department are giving him good advice. There’s no legal basis for the IG to investigate the complaint and thus no need to turn it over to Congress.

Trump’s conversation with Zelensky was not, as Hillary and the rest insist, an attempt by Trump to solicit Ukrainian interference in the 2020 election. It is perfectly reasonable — and legal — for Trump to ask Zelensky to investigate possible corruption regarding Hunter Biden even if the request was for information that Trump could use politically. Period.

According to news reports of the conversation, Trump offered no quid pro quo in terms of aid that had been stopped because of Ukrainian corruption. A “promise” was reportedly made by Trump, but without a quid pro quo it’s meaningless.

Other conversations between Trump lawyer Rudy Giuliani and the Ukrainian government apparently also centered around the need for an investigation of Hunter Biden’s activity.

Trump’s and Giuliani’s conversations are legitimate even if they are politically motivated. There’s no abuse of power, far less any crime, in these talks.

Many pundits are pointing to a statement by Joe Biden in 2018 that while he was vice president he had insisted that a prosecutor be fired or Ukraine wouldn’t receive the billion dollars or so in aid it had been promised. These folks have it wrong. First, it appears that an ongoing investigation of Hunter Biden’s activities in Ukraine may have been closed at the time of then–Vice President Biden’s threat. Second, the problem of corruption in Ukraine is pervasive. The prosecutor in question was fired. An investigation should be done, but it’s unlikely to prove anything illegal was done.

Is the complainant an Obama holdover with a continuing grudge against the president or even a member of the CIA’s leadership, such as CIA Director Gina Haspel (the protégé of fervent Trump enemy and former CIA director John Brennan) or someone else?

Because the complaint was based on hearsay and not direct knowledge, it’s entirely likely that it is a put-up job by a Trump adversary. We need to know the identity of the complainant — and the relationship the complainant has to people such as Haspel and Brennan — to determine whether it was a political assault on Trump.

Trump’s adversarial relationship with the intelligence community is unhealthy for the nation and for his presidency. It is understandable because the intelligence community — at least Brennan’s CIA as well as the FBI — abused their powers to investigate him and his campaign based on the never-verified allegations in the “Steele dossier” that was bought and paid for by the Hillary Clinton campaign.

Nevertheless, Trump needs to heal that relationship. Unless he replaces people like Haspel with people whom he can trust, such as Joe Maguire, he’ll never know how much value he can place in the intelligence information he receives every day.

Policy-making in the absence of reliable intelligence is just guesswork. We cannot afford a president making decisions on Iran, China, North Korea, and Russia on the basis of guesswork.