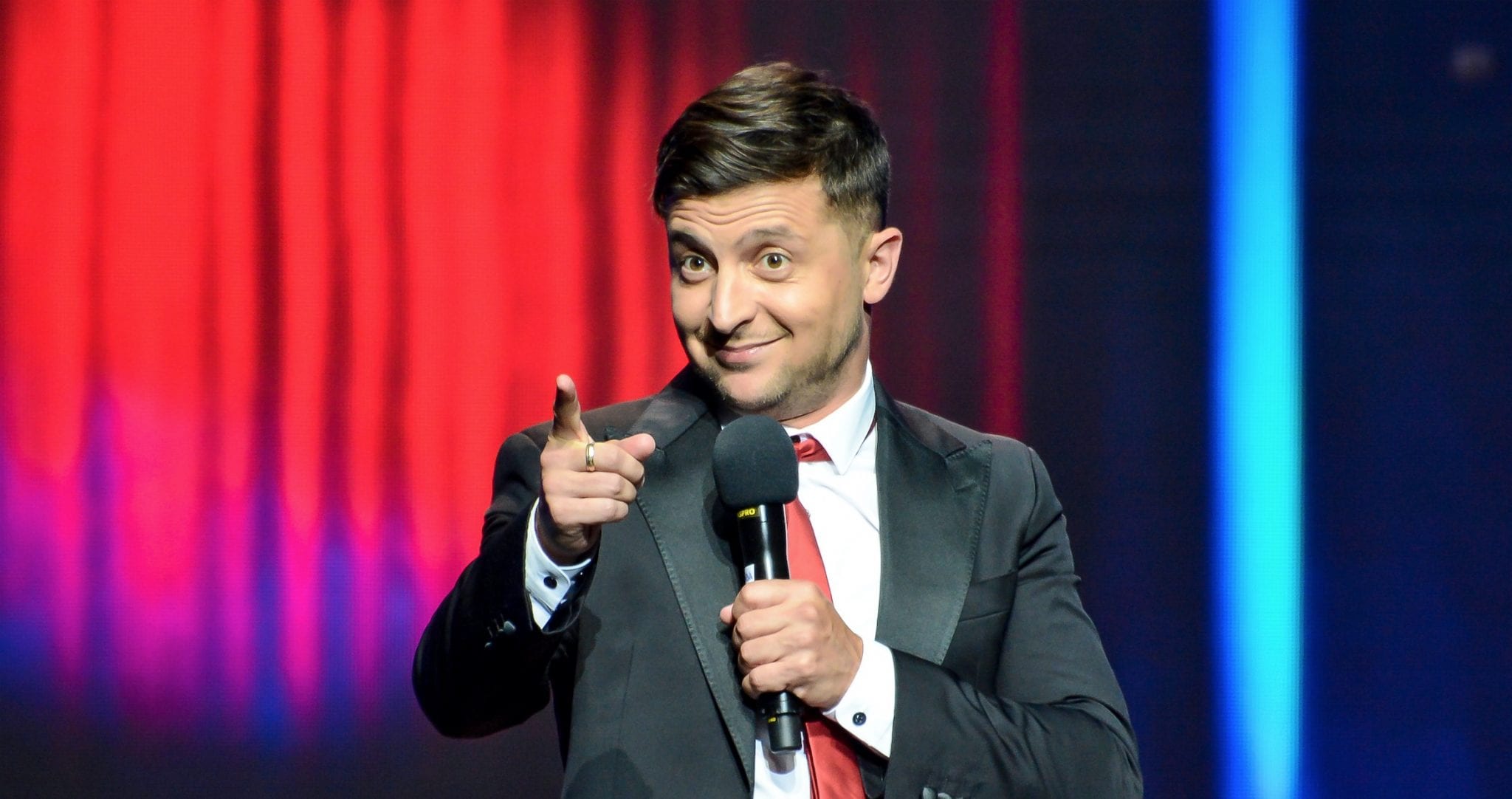 Comic actor and challenger Volodymyr Zelenskiy is so far ahead, even Ukraine’s kleptocratic elites and Western-financed NGOs can’t possibly steal enough votes to give Poroshenko a second term.

It should be a plus for rooting out corruption, including new evidence that the U.S. Embassy colluded with Ukrainian law enforcement to influence the 2016 presidential election while protecting George Soros’s political interests.

More information about former Vice President Joe Biden’s abuse of power — namely, turning Ukraine into a slot machine for his son — might also become available under a new government.

A poll released in Kiev last week showed Zelenskiy, age 41, with 61% support compared to 24% for the incumbent, known as the “Chocolate King” because his billion plus fortune includes ownership of a high-profile confectionary firm. A solid 83% of survey respondents said Ukraine requires “radical changes.”

In first round voting on March 31, Zelenskiy led a pack of 37 candidates, garnering 30% to the president’s 16% — putting the two into a second round.

Poroshenko is one of a handful of oligarchs for whom post-Communism brought unimaginable riches, while condemning the country to a stagnant state of discontent and opaque political machinations.

While most other zillionaires have seen fortunes slashed or schemes outlawed since he won election in May 2014, the Chocolate King continued to make money, despite telling the electorate he would abandon business for public service.

According to financial data revealed by the Panama Papers, Poroshenko stashed over 450 million euros in an Amsterdam-based company registered in Cyprus. So instead of paying 18% taxes in Ukraine he only pays 5% in Cyprus.

In disgust, Ukraine’s voters are turning a popular TV sitcom, “Servant of the People,” into reality: Zelenskiy plays a history teacher whose rant against corruption catapults him to the presidency. The show kicked off in 2015; its eponymous political party launched only last year.

Few are sure what a Zelenskiy presidency would mean precisely, because his platform is inchoate. Both men agree the country should strive to integrate with Western institutions.  The challenger says he would use a referendum to gauge popular support for NATO membership, for example.

Corruption is the Pivotal Issue

Poroshenko has accomplished little. Worse, a respected TV journalist’s exposé in February revealed the president’s close association with men defrauding the government in military hardware procurement.  (This budget has more than doubled in the last five years, multiplying opportunities for graft.)

The 22-year-old son of a former Poroshenko business partner, who, until recently, held a government post supervising the defense industry, was allegedly part of a group selling weapons parts to the army at massively inflated prices — faulty goods smuggled from Russia despite an embargo, to boot.

The only shadow over Zelenskiy is his link to a Poroshenko rival, magnate Igor Kolomoyskiy, who owns the TV station running “Servant of the People” and provides lawyers, security, and vehicles to the actor’s campaign. Kolomoyskiy lives in exile, threatened by Poroshenko’s moves against a bank he owned.

Looking at Poroshenko’s performance, it’s no wonder a neophyte is trouncing him.

He has presided over a war with separatists (backed by Russia) on the eastern border, a slow bleed more than a constant military contest. Yet it has taken a tremendous human toll.

Morale among soldiers is low, based on the high number of suicides and desertions. Since the nation has been hovering near bankruptcy, the availability of military equipment, uniforms, and food is inadequate.

Millions have fled. Although statistics are not firm, an estimated two million flocked to Poland, another three million are in Russia, and half a million left for the Czech Republic.

Indisputable is the massive amount of money sent back home to support families and friends: Remittances ran about $9 billion last year: The diaspora and the IMF float the Ukrainian economy.

Meanwhile, some 1.5 million people are refugees within Ukraine’s borders.

Ukraine’s health care is in the toilet. For example, it has one of the world’s lowest rates of newborn vaccinations against measles: only 54%. The Red Cross is now coping with a major measles epidemic across the country that has impacted 75,000 people.

Besides divergence in their ferocity on corruption, the two men differ in their attitudes toward Russia. Zelenskiy says he would engage with President Putin, while more of the same from Poroshenko means “nyet” to diplomacy.

The political novice is a native Russian speaker. Most of his acting success, before “Servant of the People,” was in Russian-language productions. His parents are Jewish, although he has not talked about his own beliefs. And he grew up in Ukraine’s southeast, an ethnically Russian area neighboring the conflict zone.

One of Zelenskiy’s clear stands is against the Ukrainian language-exclusive law approved by the country’s parliament in 2014 and the 2017 restrictions on education in non-Ukrainian languages — strongly affirmed by Poroshenko.

Almost half of Ukraine’s population uses Russian at home and four of the country’s five largest cities are majority Russian. Yet, the language’s use is banned in schools after fifth grade.

Ukraine’s education law is “semi-fascist,” said Gergely Gulyas, an official in the Hungarian prime minister’s office. He said Budapest hopes it can “communicate with the next Ukrainian government because it failed” to see eye-to-eye with the current one.

Poroshenko has wrapped his campaign in a Ukrainian flag. His slogan is, “Army, Language, and Faith.”

He is often depicted wearing military fatigues, although the conflict is a stalemate and the armed forces are having trouble keeping ranks full.

The incumbent’s big idea in 2018 for regaining popularity — despite the country’s glaringly poor record in economic growth, justice reform, healthcare, poverty reduction, and diplomacy — was inserting himself into an Orthodox Church dispute. He helped engineer the creation of a new Ukrainian national (“autocephalous”) Orthodox entity, despite non-existent support in Church law or tradition for such a political move.

So, a fascinating aspect of Zelenskiy’s popularity is that it affirms pluralism against identity politics, which has already stoked virulent nationalism.

What has been the upshot of advancing nationalist rhetoric over national well-being? Sadly, the rise of extrajudicial thuggery.

For example, the Azov Battalion, formed in 2014 to fight alongside Ukrainian regulars, has morphed into a nationwide vigilante group. While confronting illegal loggers might sound laudable, members have also been known to bust into local council meetings to make specific demands, march through Kiev in military formation (600 people strong), and assault activists they don’t like.

Azov functions as a unit of the National Guard, a nationwide street-level militia, and a political party — with close ties to the current interior minister.

It also trained and radicalized four misguided American supremacists, according to an unsealed FBI indictment regarding the agitators who went to Ukraine for further training. An investigative reporter with Haaretz documented the battalion’s links to neo-Nazi groups across Europe.

Last year, the Atlantic Council explored the dangerous trend of Ukrainian law enforcement relying on nationalist groups (Azov and several others) for muscle in a weak State. An article on the council’s website pointed out that the array of extrajudicial attacks on events and people weakens the Ukrainian State, hurts its international reputation, and contradicts the values of the 2013-14 Maidan Square protests.

The Obama Administration helped Poroshenko’s ascent in 2014, through its “loud and proud” support for a new government in Kiev, even before pressure from the Maidan protests provoked President Viktor Yanukovych into exile.

Who can forget Assistant Secretary of State Victoria Nuland brazenly telling U.S. Ambassador Geoffrey Pyatt (on a bugged phone) to “F**k Europe!” if the EU was not keen to clinch a coup d’état. In a transcript of the call, Vice President Joseph Biden is part of the small American group deciding who will rule Ukraine.

But it appears American political support came with strings attached.

A detailed investigation by John Solomon for the Hill last month demonstrates the U.S. Embassy intervened in 2016 to block Ukrainian prosecutors from investigating U.S. government funding of $1 million to the Anti-Corruption Action Center, an NGO financed by George Soros, as well.

The same NGO steered Ukrainian officials to target locals with whom Paul Manafort was associated and it worked with the FBI to unearth dirt against Manafort.

(Interestingly, although the center’s website prominently declares it “does not support” a presidential candidate in the upcoming election, it also declares, “Poroshenko Supported the Anti-Corruption Agenda,” while news on Zelenskiy is about 13 visits he made to meet oligarch Kolomoysky — an accusation Poroshenko has been trumpeting.)

Ukraine’s current prosecutor-general announced last month that the U.S. Ambassador to Ukraine presented him with a list of people not to prosecute — during the run up to the U.S. presidential election.

He also told the Hill that his office intends to open an investigation into whether Ukrainian law enforcement, working closely with the U.S. Embassy, leaked information to American media about Manafort’s financial ties in Ukraine in order to help Clinton and undermine Trump.

Soon after revelation of so-called “black ledger” records, Manafort resigned from the Trump campaign; the relationship became a key element in accusations of Russian collusion too.

Biden Protected a Dubious Energy Company — for His Son

As the U.S. government was organizing the new Ukrainian government in April 2014, Vice President Joe Biden’s son, Hunter, began an eyebrow-raising gig: He took a seat on the board of Burisma Holdings, one of Ukraine’s largest natural gas companies.

What’s fishy is the timing of Hunter Biden’s lucrative appointment. The owner of Burisma, Mykola Zlochevsky,served as ecology minister in Yanukovych’s government, which fell when the president jumped ship in February 2014. So the company needed new patrons, especially because it was under investigation by British authorities for money laundering.

The same month Biden was brought on board, the British froze $23 million of money Zlochevsky claimed as his own. When Ukrainian prosecutors refused to play ball with British investigators, Burisma’s owner got it back — money many felt belonged to Ukrainian taxpayers.

Oddly, at a public event in 2018, the former Vice President bragged that he pressured President Poroshenko, threatening to withhold a $1 billion U.S. loan if he did not fire a top prosecutor then investigating Burisma.

Biden recalled telling the president, “If the prosecutor is not fired, you’re not getting the money. Well, son of a bitch. He got fired.”

Hunter Biden was making $166,000 per month from Burisma while his father was acting as the government’s rainmaker, according to research by Peter Schweizer. That is quintessential, Ukrainian-style dealing.

So, get ready to turn to Zelenskiy’s channel. You ain’t seen nothing yet.

Victor Gaetan is senior international correspondent for the National Catholic Register and a contributor to Foreign Affairs magazine and the Washington Examiner.