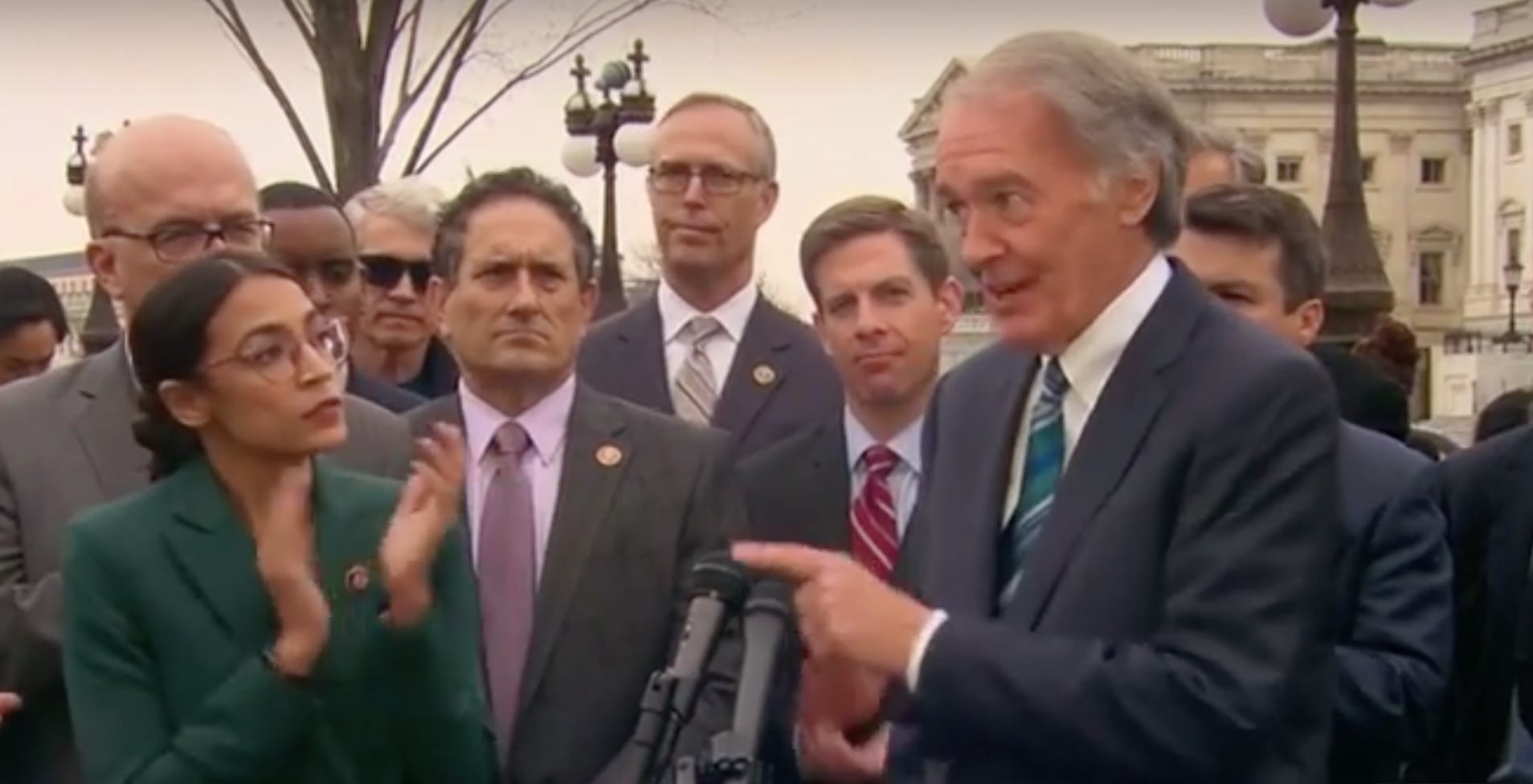 Watermelons: green on the outside, red on the inside.

Leftist environmentalists hate that. And yet, they do little to eschew the label. Quite the contrary, they earn it in spades.

They have from the outset. Whether sheer coincidence or because the Devil has a sense of humor, Earth Day always marks Vladimir Lenin’s birthday. The first Earth Day, April 22, 1970, just happened to be the centennial of Lenin’s birth.

Given that interesting confluence of dates, it seems more than ironic that so many former communists, when the Cold War ended, ran for the woods. It was the ideal ideological refuge. Rocks and frogs cannot tell the commie “environmentalist” to go jump in a lake. They can’t tell the central planners to take a hike back to their air-conditioned offices in Manhattan or coffee shops in Berkeley. Thus, for socialists, here’s the perfect constituency to wield government power and manage people and property.

If Marx and Engels were alive today, they would be writing manifestos on ecological “social justice” at some silly university. Today, their disciples at People’s World urge left-wingers everywhere to “Get on board the… Climate Train.” The head of Communist Party USA hails modern ecological warriors as “climate justice activists” battling for a crusade of “green socialism.”

The entire spectacle was stunning to behold. And since the announcement at the end of last week, conservatives everywhere have teed off, taking their whacks at this ill-begotten creation.

Amid the many reports, one of the best distillations of this environmental swill was done by Americans for Tax Reform, which posted a PDF of Ocasio-Cortez’s talking points prior to the press conference for the February 7 morning launch. If you haven’t seen it, read it and weep. Actually, read it and laugh. It reads like something out of The Onion or The Babylon Bee.

One is tempted to call the proposal juvenile, but sophomoric seems a better word because it plays to the college-girl image that Ocasio-Cortez ironically wants to shed. Actually, the proposal may well forever torpedo her ability to be taken seriously. It makes one wonder if certain forces in the Democrat camp conspired against the young woman, perhaps one of the surprise Democrats who applauded Trump’s line denouncing socialism in the State of the Union — that would include Chuck Schumer, Nancy Pelosi, and (it was reported in no less than the disgruntled communist press) even Elizabeth Warren.

Did a Machiavellian Ms. Warren, perhaps working with her old Massachusetts colleague, Ed Markey, conspire to try to kill the presidential possibilities of Ocasio-Cortez? If not Warren, then maybe Schumer and Pelosi, who perhaps feel threatened by this young congresswoman that DNC chair Tom Perez calls “the future of our party”?

If that sounds over the top, well, take a look at Ocasio’s talking points from last week, which really ought to constitute political suicide:

“Build out highspeed rail at a scale where air travel stops becoming necessary.”

“Upgrade or replace every building in US for state-of-the-art energy efficiency.”

“a 10-year plan to mobilize every aspect of American society at a scale not seen since World War 2 to achieve net-zero greenhouse gas emissions.”

“national, social, industrial and economic mobilization at a scale not seen since World War II.”

As for paying for this “massive transformation of our society,” look at this breathtaking display of economic illiteracy: “The Federal Reserve can extend credit to power these projects and investments and new public banks can be created to extend credit.” No fear, says Ocasio-Cortez, “the question isn’t how will we pay for it, but what will we do with our new shared prosperity.”

The needed greenbacks from the Green New Deal will fall from the rejuvenated air like manna from Gaia.

Conservatives have lampooned the notion of attempting to lay a vast array of railways across the Pacific from California to Japan. It would be easier to invent Star Trek teleporters.

And yet, lest you think that Ocasio-Cortez and friends really want to ban airplanes, forget it. The jets will be there for the leisure of the limousine liberals, the champagne socialists, for the planners, for the rulers rather than the ruled, for the masters rather than the masses. The Proletariat, the rabble, what Marx called the lumpen proletariat — they will get sandwiched into the boxcars. The smart people, the party apparatchiks, they fly first-class.

Invoking FDR, JFK, Ike, and Kamala and Bernie, Ocasio-Cortez sums up her program in the name of “social and economic justice and security through 15 requirements.” The whole concoction reads like it was crafted at a corner Starbucks by college kids marshaled from Ocasio-Cortez’s Twitter following. And no doubt, this proposal by Ocasio-Cortez and allies is a mass indictment of our universities and education system.

Old Al Gore’s environmental manifesto was pretty extreme, too. He likewise spoke of changing human nature and Americans undertaking a “wrenching transformation” of their society. Also evoking World War II, Gore warned of an “environmental holocaust” and “ecological Kristallnacht.” Al Gore’s Earth in the Balance betrayed an Al Gore not in balance.

But even Ozone Al’s ideas weren’t as excessive as this heap of ecological-ideological mumbo-jumbo dished by Ms. Ocasio-Cortez. This poor girl has embarrassed herself. This genuinely ought to be a career-killer.

Yes, I know that for liberals what matters most are intentions and identity. Identity politics is the altar at which they worship. They’ll vote for her. But vast numbers of Americans, including virtually anyone in the business world or private sector with a rudimentary sense of how stuff works, will judge this a disqualifier for higher office, especially the White House.

Again, one must wonder if Ms. Ocasio-Cortez has been set up.

That aside, the less laughable and more insidious aspect of this are the genuinely radical roots. To that end, interested observers should dig deeper into the origins of the Green New Deal. This thing didn’t just roll off the turnip truck when Ocasio-Cortez strolled into Washington a few weeks ago.

For a gander at the wider tentacles of this beast, check out the “About” section for the Green New Deal at the website of the Green Party. One sees instantly that this is far more about socialism than environmentalism. Below the tab for “Hands Off Venezuela” are the Four Pillars of the Green New Deal. Point one focuses on the Economic Bill of Rights:

Our country cannot truly move forward until the roots of inequality are pulled up, and the seeds of a new, healthier economy are planted. Thus, the Green New Deal begins with an Economic Bill of Rights that ensures all citizens:

After that comes pillar two, on “A Green Transition,” followed by the remaining two pillars, on “Real Financial Reform” and “A Functioning Democracy.” Thus, only a quarter of the four pillars for the Green New Deal actually deal with green deals. The vast majority is old deal socialism. Among the remaining two pillars are calls for: “establish a 90% tax on bonuses for bailed out bankers,” “enact the Voter Bill of Rights,” “making Election Day a national holiday,” “abolish the Electoral College and implement direct election of the President,” “restore the vote to ex-offenders who’ve paid their debt to society,” “protect local democracy and democratic rights by commissioning a thorough review of federal preemption law and its impact on the practice of local democracy in the United States,” “create a Corporation for Economic Democracy,” “repealing the Patriot Act,” “ending the war on immigrants,” “rein in the military-industrial complex by reducing military spending by 50% and closing U.S. military bases around the world,” etc. Get the picture?

What in the heck does this have to do with the environment? Nothing, of course. But this is how the left has long exploited the environment for its own purposes of revolution and radical transformation. Not a word of this is a surprise to anyone who has followed left-wing environmentalists.

Green on the outside, red on the inside. Welcome to American socialism’s new Green Red Deal.