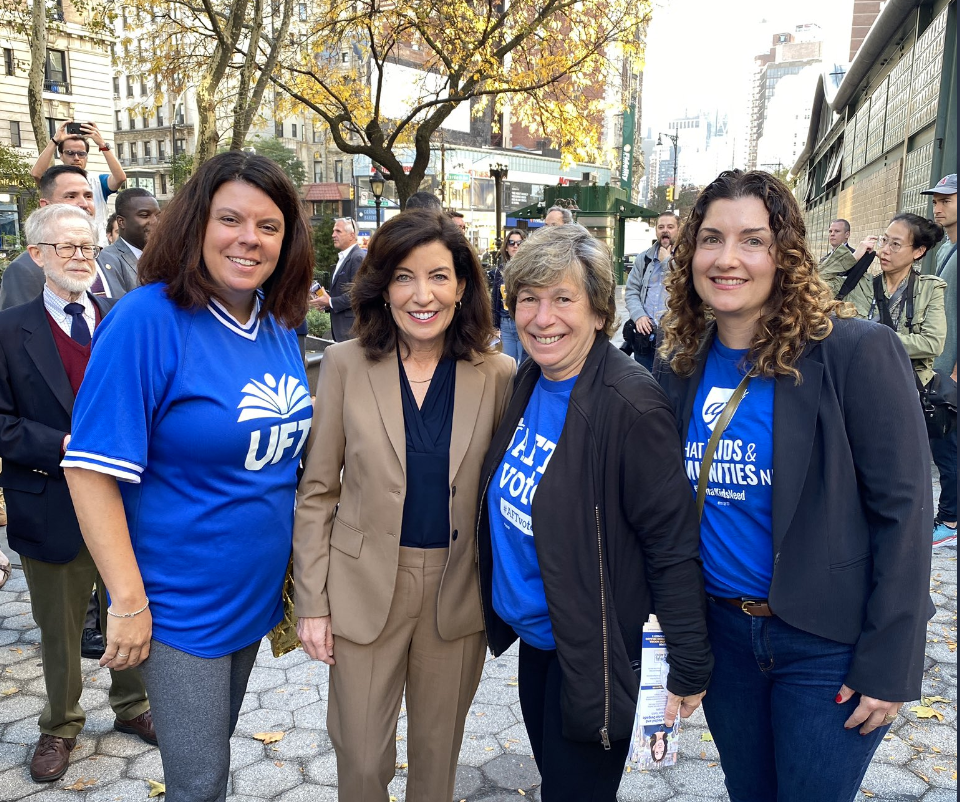 On Nov. 7, New York Gov. Kathy Hochul tweeted a snapshot of herself smiling alongside American Federation of Teachers (AFT) President Randi Weingarten. It was a curious choice for a photo op given that there is no person in America who bears more responsibility for the academic and social deterioration of American children due to the COVID-19 pandemic than Weingarten. Yet, with the AFT’s help, Democrat lockdown enthusiasts, including Hochul and Michigan’s Gov. Gretchen Whitmer, won their elections, underscoring the accelerating political might of teachers unions. Voters received a taste of Weingarten’s political appetite when organizations like the AFT and the country’s largest teachers union, the National Education Association (NEA), lobbied to keep students “learning” remotely well after it was safe for them to return to in-person instruction. Yet it was this last election cycle that solidified the depth of teachers unions’ expanding political sphere of influence.

The Wall Street Journal notes how the NEA and its state affiliates “poured $37.8 million into 2022 races.” The AFT, the second-largest teachers union, donated another “$11.6 million.” Almost all donations went to Democrats. The prioritizing of political involvement by teachers unions has been apparent for some time. More recently, the NEA and AFT have taken policy positions on issues ranging from abortion to the Israeli-Palestinian conflict. According to the Government Accountability Institute’s analysis of campaign finance records, AFT contributions “spiked from $3.7 million in 2008 to $20 million during the 2020 election cycle.” First lady Jill Biden hosted a virtual White House event one day after her husband’s inauguration to honor educators like Weingarten, whom she compared to a “general never far from the front lines.” As millions of American children remained confined to remote instruction, Weingarten and NEA President Becky Pringle appeared in person for the White House Zoom celebration. In partnership with Democrat lawmakers, teachers unions have successfully evaded an electorate privy to their hypocrisy.

Pennsylvania senator-elect John Fetterman’s inability to coherently respond to voters following his May stroke did not deter the NEA and the Pennsylvania State Education Association from endorsing his candidacy and ensuring that he be among their top 20 donor Senate recipients. Fetterman promised that once elected, his first call for education policy would be to the teachers unions since they “are the professionals.” Most concerning is that Fetterman would cede the public-education reins into the ideologically driven hands of Weingarten and Pringle while sending his children to Winchester Thurston School in Pittsburgh. According to the Washington Free Beacon, tuition at the private institution exceeds $30,000 per year.

For their part, Democrats’ cash advantage was assisted by donations to super PACs by teachers unions. In the final weeks of her campaign, Hochul’s race against GOP challenger Lee Zeldin tightened. Sensing a potential upset, the New York Times affirmed that the AFT and the New York State United Teachers, which represents 600,000 state teachers, each poured “$500,000 into a super PAC, Progress NYS, to finance an ad campaign on television and online.” Hochul’s time in office has displayed a stunning disregard for children. As mask mandates were lifted for businesses, students were still forced to muzzle until well into the 2021–2022 school year. In the coming months, expect Hochul’s pandering to teachers unions to intensify as decisions revolving around COVID vaccine mandates for children and progressively charged curricula are addressed.

Teachers unions also hampered parents’ hopes in Michigan, where Whitmer imposed some of the most restrictive COVID regulations in the country yet still managed to win reelection. While the state’s abortion ballot measure helped galvanize Democrats to the polls, Whitmer’s efforts were propelled by the NEA and AFT, which donated almost $2.25 million to her campaign. Along with rejecting a 2021 budget proposal containing a $155 million program that would give parents $1,000 in tutoring instruction, several school districts in the state were still insisting on remote education earlier this year following an uptick in COVID cases.

Incidentally, students whose elected officials maintain strong ties to teachers unions experienced post-COVID learning deficits greater than their red-state counterparts. The National Assessment of Educational Progress, also known as the “Nation’s Report Card,” confirms that fourth graders in New York and Michigan exhibited significant losses in reading and math, falling below the national average in both categories. Academic declines were less pronounced in places like Florida and Texas. In those states, achievement scores hovered above those in liberal-leaning states, where Democrats placated teachers unions by backing extended school closures.

Last week’s midterm election highlights teachers unions’ pivotal role in the political arena. As they pour millions into Democrat coffers, expect leftist lawmakers to sideline the academic and emotional interests of America’s youth and reframe policies that comport with the cultural values espoused by groups like the NEA and AFT.