The launch was billed as a “third high-altitude suborbital flight test of a prototype Starship,” but its highlight wasn’t the successful firing of the three Raptor engines or their sequential shutdown as the ship reached apogee six miles above the surface of the Earth. It wasn’t the successful “flip maneuver” achieving horizontal flight. It wasn’t even the onboard computer-steered airfoil flaps that “flew” the starship back to the spaceport. SpaceX successfully demonstrated those maneuvers in December 2020 with SN-8 and in February 2021 with SN-9. The highlight was that SN-10 nailed the vertical soft landing, dead center on the assigned landing pad.

SN-8 came close, but in its last seconds, rocket fuel system issues caused a hard landing and a spectacular explosion. SN-9 repeated its predecessor’s successful launch and return, but a few dozen meters above the landing pad, the ship tipped 20 degrees out of vertical when a Raptor engine failed to ignite properly, and, again, exploded into a spectacular fireball. Both launches were considered successes (Elon Musk tweeted that these early prototypes have “one out of three” chances to land safely).

A soft landing of a reusable primary orbital spacecraft is the holy grail of affordable, sustainable space travel.

And with SN-10? SpaceX got it right — well, almost right. A perfect launch with all three Raptor engines firing. Sequential shutdowns as the ship neared apogee. With all engines shut down, SN-10 hovered, and dropped into the horizontal flight maneuver. The ship flew back to the spaceport, all Raptors reignited, the ship flipped back to vertical, shut down two engines to land on one, and six minutes and 19 seconds after liftoff achieved a soft, and survivable (for the moment), landing.

True, the landing legs did not properly deploy, and true, the nose of the ship tilted skywards slightly off center. But land it did. An orange fire at the ship’s base was engaged by automatic fire suppression systems, and the minutes ticked by. At T + 14:36, over seven minutes on the ground, what looked like a methane leak caused an explosion that shot the upper portion of the ship back up into the air to collapse as a crumpled hulk, vaguely reminiscent of the Hindenburg. But still, overall a successful landing — a successful landing of a prototype reusable space vehicle powered by in-development Raptor rockets. It’s a milestone that is sending shockwaves throughout the aerospace industry.

It was an epic flight. At T – 03 the ship vented plumes of white vapor: liquid oxygen expanding at pressure. At T – 02:24 SpaceX launch control locked the fuel valves. Cascades of vapor fire-hosed around the fins. At T – 00 the white plumes pulsed in an odd astro-Morse code, and then: ignition and lift off.

A double helix of orange and magenta flame spiraled down below Starship SN-10. The mechanical static-laden thrum of the engines evoked memories of Imperial Ming spaceships of the old Buster Crabbe Flash Gordon serials from the 1940s.

All three Raptors drove the ship skywards. At T + 2, SpaceX control intentionally shut down one Raptor. The ship traveled up towards apogee, six miles above the ground. At T + 4 the ship continued its glide upwards with just one Raptor, hovered, and dropped Earthwards in an unpowered fall.

At T + 4:40 the ship flipped to horizontal, and under the positive autonomous control of fins and flaps headed back to Boca Chica spaceport. 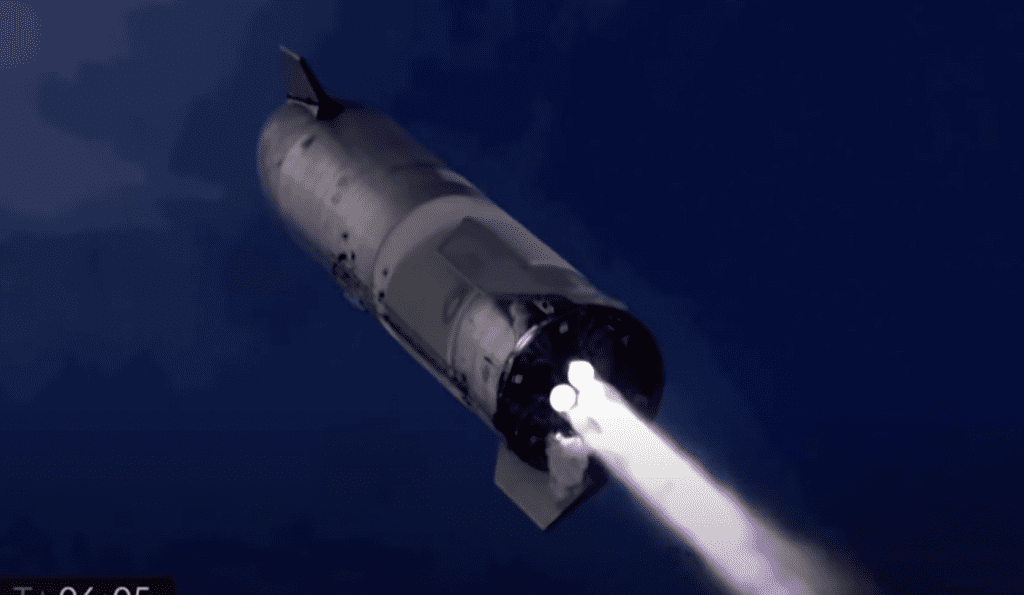 At T + 05:43, the ship was less than 2 kilometers above the ground. All three Raptor engines reengaged, reorienting the ship for a vertical landing. The ship wobbled, straightened, and continued to descend. One engine cut out. The ship wobbled and straightened further. Now powered by one Raptor, the ship settled down. Right on target.

The stated goal of the launch was to gather data as the ship descended back to Earth and demonstrate how well the flaps and fins work while the vehicle is in horizontal flight. The soft and technically survivable landing was icing on the cake.

The coolest thing? Starship is one of three designs selected by NASA to land astronauts on the Moon under its Artemis Moon to Mars program.

Another cool thing: SN-11 is already fitted with its nosecone and aerosurfaces and awaiting installation of improved Raptor engines and launch pad positioning. Successive prototypes march towards SN-15, and new Raptor engines are being warehoused for rapid refits of successive flights.

The future is here — or, at least, right around the corner.