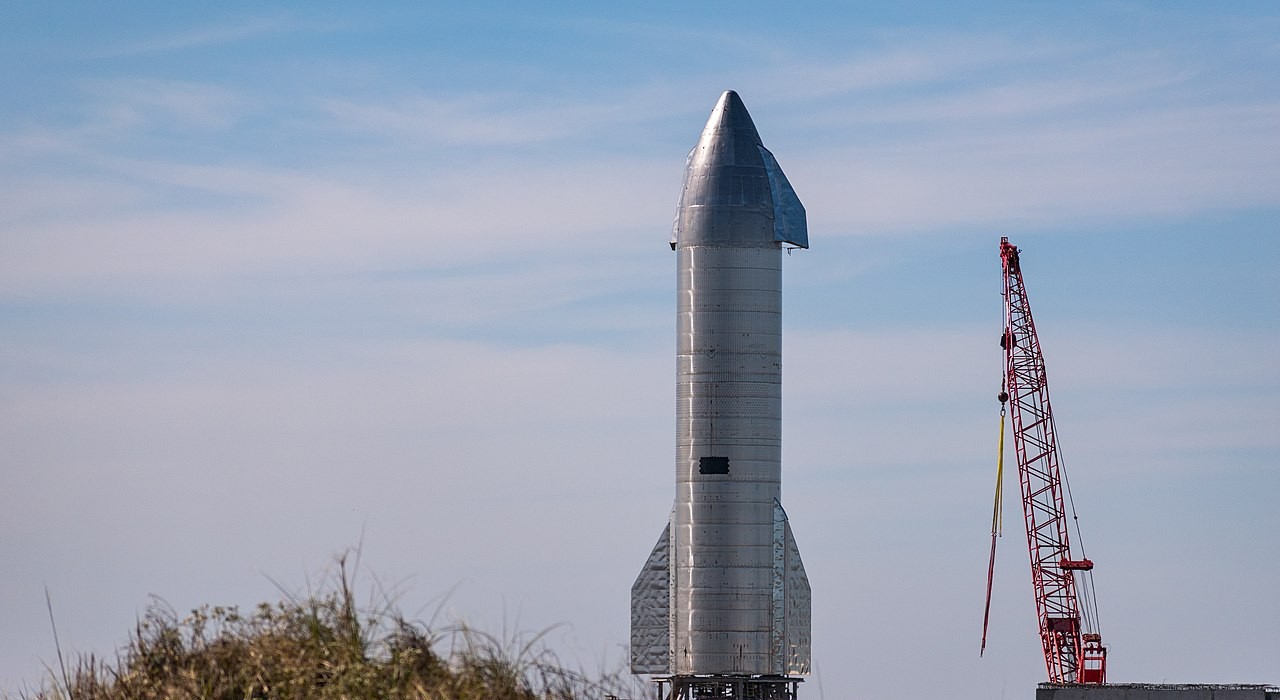 Tuesday, February 2, 2021, 2:25:17 PM CST. It’s a scene straight out of a 1960s science fiction pulp magazine. One hundred and sixty feet of gleaming stainless steel rocket ship sitting on its fins on a launch pad in the center of SpaceX’s Boca Chica spaceport. Clouds of venting liquid oxygen stream from a point high on the ship’s nose cone and gush from around its finned base. The countdown begins, interspersed with cryptic commentary from SpaceX ground control. With no gantry to tilt back, Starship SN-9 stands on its own. Three … two … and just before ONE, a flash of incandescent light, and dark smoke erupts from three Raptor rockets like an upside-down mushroom cloud. The ship majestically accelerates skyward above a triangle of orange fire that elongates into a long finger of magenta-streaked blue flame.

Multiple cameras track the ship’s progress, up, up, ever higher, providing visuals of the blazing Raptor rockets. Ninety seconds in and engine No. 3 shuts down. SN-9 continues to climb with two raptors. Engine No. 2 shuts down three minutes, 20 seconds in, and the ship continues to ascend under the power of engine No. 1. Engine No. 1 throttles down, and SN-9 seems to float upward into the stratosphere as the rocket glides up to apogee, 6.2 miles above the Earth. The ship absolutely hovers, and engine No. 1 cuts off. The ship drops down in free fall. Assisted by steering bursts from Reaction Control System (RCS) cold gas thrusters from the nose of the Starship, SN-9 “belly flops” into a subsonic horizontal glide back towards the spaceport, steered by aerodynamic forward and aft fins.

Six minutes in and one and one half kilometers above the landing pad, two engines ignite, flipping the ship up into a vertical aspect. The ship is prepared to land with one engine, but a few dozen meters above the landing platform the near perfect vertical descent falters. One raptor seems to expel debris and smoke, the ship tips towards a 20-degree tilt, hits at an angle, and erupts into flame after a near-perfect six-minute, 26-second test flight.

Like SN-8, SN-9 successfully launched, climbed six miles straight up, then flew back to the spaceport for a controlled, but explosive end.

Starship SN-10 is already on its launching pad waiting to be serviced, refueled, and flown in pursuit of a safe successful landing — possibly later this month.

At this point, the current run of Starships is basically a fleet of double-hulled silos stuffed full of liquid oxygen and methane (methalox), with governable engines, maneuverable airfoils, and sophisticated guidance software. But imagine the stainless-steel outer hull coated with a porous, self-healing heatshield, with the double hull providing coolant to retard overheating on reentry. Imagine the upper sections stuffed with 100 tons of cargo or fitted out as human transports to house 100 passengers. Imagine a fleet of 100 Starship purpose-built variants. Imagine passenger Starships providing hypersonic travel to any spot on planet Earth in a matter of hours. Imagine a fleet of workhorse Starships resupplying the International Space Station (ISS), Gateway, and lunar colonies. Imagine starship tankers orbiting the moon to refuel deep space starships to colonize Mars.

We are on the brink of a Brave New Solar System, and it is unlikely that even a Biden–Harris sabotage squad can’t stop it. Oh, they can neuter NASA for another eight years like Obama did in 2008. But they’ll find it tough reining in Elon Musk’s vision of affordable access to space.

How affordable? The Starship spacecraft represented by SN-9 was conceived as both a second-stage, reaching orbit atop a super-heavy “mega booster,” and as an on-orbit long-duration vehicle. Once certified for cargo deployment and crewed missions, cost per launch has been estimated at $5 million, with an aspirational estimate as low as $2 million once in full production. For comparison, NASA’s Artemis/Orion Space Launch System (SLS) is estimated at over $2 billion (with a “B”). Starship is capable of reentering Earth’s atmosphere from orbital velocities and landing vertically. NASA’s SLS is basically a one-time-use souped-up Atlas V with side boosters. Its potentially reusable Orion space craft would reenter the atmosphere à la Apollo capsule, parachuting to Earth for a soft landing.

True, Elon Musk and SpaceX still have a ways to go. SN-9 isn’t “space worthy.” Its three Raptor engines are calibrated for sea-level atmospheric operation. Orbital versions will need three more Raptors, calibrated for zero gravity. To get into orbit, they’ll need that super-heavy first stage, which hasn’t been built yet. But the basic technology has been proven, and construction of the super-heavy reusable booster is underway.

One day before the Biden inauguration, still holding out hope for a successful NASA Artemis SLS path to “the first woman and next man on the moon by 2024,” NASA Administrator Jim Bridenstine made an impassioned plea for “constancy of purpose,” insisting that the way to look at space exploration should never be political, should never be partisan, should always be about bringing people together. “We need the Artemis program,” he said. “We need our Moon to Mars program to span administrations, to span decades, to span generations. We are the Artemis Generation.”

NASA tends to get tossed to and fro with every succeeding administration, losing ground, then gaining ground, only to lose it again. Meanwhile, under Elon Musk, SpaceX is displaying an unyielding, inexorable dedication to the ultimate goal of building a sustainable city on the Red Planet. A crewed Starship flight to Mars could happen as soon as 2024 or 2026. How’s that for “constancy of purpose?”

An Artemis Generation? Maybe, maybe not. But we are certainly on the cusp of the SpaceX Generation.