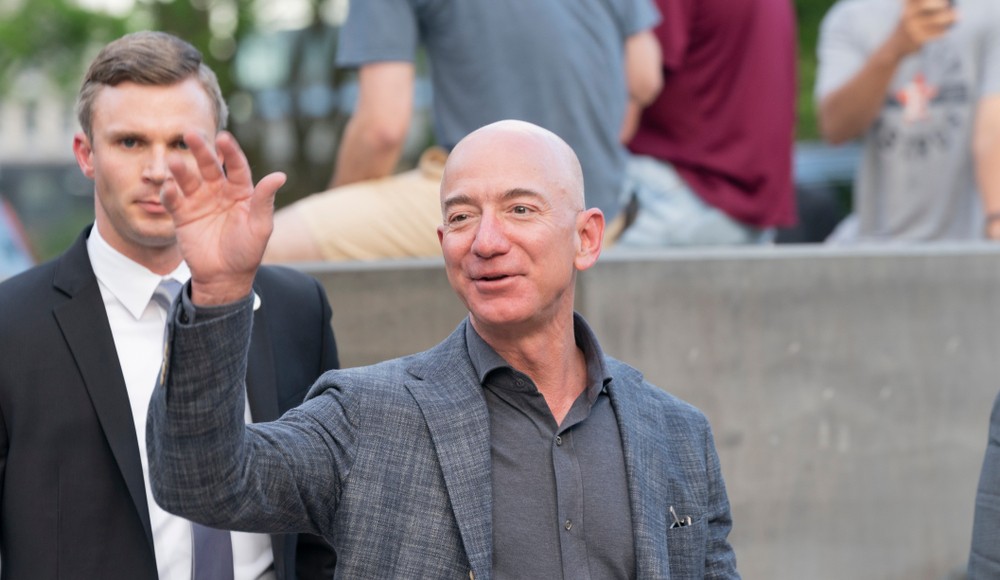 America took a jump backward about 100 years last week, and it was an interesting sight to see.

At issue was Sen. Marco Rubio and an op-ed he wrote for USA Today. Rubio announced a surprising change of position — specifically, that he backed Amazon workers at a facility in Bessemer, Alabama, in their effort to unionize against the e-tail giant.

Republicans throwing in behind unions? Is this a sign of the apocalypse?

You’d think so, but according to Rubio’s op-ed it isn’t much of a sea change in the GOP’s economic policy. Instead, he’s taking the stance as a result of Amazon’s toxicity in the culture wars:

For the past several years, Amazon has waged a war against working-class values. The Silicon Valley titan uses anticompetitive strategies to crush small businesses, bans conservative books and blocks traditional charities from participating in its AmazonSmile program. Not surprisingly, it has also bowed to China’s censorship demands.

Amazon may be headquartered in America, but it considers itself a citizen of the world.

Now, the company is facing a unionization effort at its warehouse in Bessemer, Alabama.

The move comes after a banner year for Amazon thanks to the COVID-19 lockdowns. But even after historic market gains, its corporate leadership fears the prospect of its workers having an increased say in working conditions, so it’s looking to crush the union vote….

For decades, companies like Amazon have been allies of the left in the culture war, but when their bottom line is threatened they turn to conservatives to save them. Republicans have rightly understood the dangers posed by the unchecked influence of labor unions. Adversarial relations between labor and management are wrong. They are wrong for both workers and our nation’s economic competitiveness.

But the days of conservatives being taken for granted by the business community are over.

Rubio went on to say that from his perspective no woke corporate suit is getting the time of day from Republican pols going forward:

Here’s my standard: When the conflict is between working Americans and a company whose leadership has decided to wage culture war against working-class values, the choice is easy — I support the workers. And that’s why I stand with those at Amazon’s Bessemer warehouse today.

The op-ed is well worth a read, for a couple of reasons. First, Rubio doesn’t throw in with the unions completely. There is an especially rotten bill — the Protecting the Right to Organize Act — which includes pretty much every wild-haired Democrat aggression upon the labor market imaginable, from card check to practical elimination of merit shops and some long steps toward killing off the gig economy across the country. Rubio’s op-ed came out pretty forcefully against that, which resulted in the AFL–CIO’s leftist-activist Grand Pasha Richard Trumka accusing the Florida senator of “pandering.”

Rubio makes it clear this has a lot more to do with Amazon than it does with unions. It’s a declaration of war against Jeff Bezos.

Which leads us to the second reason the op-ed is worth reading: it signals that even establishment-squishy GOP senators, a description that fits others somewhat better than Rubio but still has merit in covering his background, are beginning to recognize the folly in anointing themselves the Party of Business to the exclusion of anything else.

This has been coming for a long time. The GOP’s political class, which has acted as the Stupid Party in Washington essentially since the end of Reconstruction in 1876, is the last of the party’s factions to recognize what an utter disaster the phenomenon of woke corporate America is for the culture and politics of the country. But it’s worse than just stupidity on the part of the party’s establishment — the GOP has played along for decades as the Amazons and Walmarts of the world have wiped out small business and Main Street retail, agglomerating more and more wealth and power in fewer and fewer hands.

It would be one thing if those giant robber-baron corporations had been reciprocal in their affinities. But they haven’t been.

Amazon isn’t a Republican company. Far from it. It’s one of the most overtly leftist for-profit institutions in world history. Jeff Bezos is essentially a James Bond villain at this point. He’s the richest man in the world, and his company literally puts its own customers out of business for cultural and political ends. Bezos proved that when Amazon Web Services (AWS), his server backbone controlling an oligopolistic share of the world’s internet hosting market, pulled the plug on the conservative social media platform Parler over the latter’s supposedly playing host to the organizers of the January 6 Capitol riot. That justification was a lie, as it’s been proven there was a lot more communication on Facebook and Twitter among those blamed for the riot than on Parler, but that didn’t stop Bezos or his ethically challenged minion Andrew Jassy, the CEO of AWS, from literally destroying Parler.

And then Bezos named Jassy as his successor in running the entire Amazon empire.

Of course, Bezos is stepping down from his day job at Amazon to play a larger role in his vanity project, the Washington Post, among other things. He’s sure been an asset to American journalism as its owner, hasn’t he? The Post is pumping out corporate propaganda with astonishing speed these days when it isn’t outright lying about, for instance, things Donald Trump said, which played a role in dragging the country through a needless, unconstitutional, divisive, and wasteful post-presidential impeachment.

Even from a humanitarian standpoint this is a terrible company. Amazon stole some $62 million in tips earned by its drivers until the federal government forced it to turn those funds over. Amazon opposed mail-in ballots for the union election in Bessemer after Bezos’ vanity rag penned editorial after editorial touting them in an American presidential election.

Oh, but when Rubio came out for unionizing the Bessemer workers, Amazon sure had a comeback:

When Senator Rubio says Amazon is “waging war on working class values,” does he mean our $15 starting wage, comprehensive benefits, or the paid parental leave we provide for hourly workers? If he stands with American workers like he says he does, he should endorse [Sen. Bernie Sanders’s] minimum-wage bill today.

Understand that former Obama media flack Jay Carney is now an upper-management executive at Amazon, and Carney is the one heading up this corporate advocacy on the $15 minimum wage.

The cynicism of this is really hard to stomach.

Of course Amazon wants to tout a federally mandated $15 minimum wage. Why? Because the small businesses, particularly in the retail sector, that Amazon has been acting as an apex predator in destroying for the last couple of decades can’t afford to pay that to their workers. And Amazon knows they’ll be the single largest beneficiary of that massive minimum wage hike — even while it destroys more than a million American jobs on net.

Just like Amazon and Bezos were the single largest beneficiary of that other Chinese import that came in last year and wiped out American brick-and-mortar retail along with much of the rest of the economy.

As an aside, you did notice that Eddie Murphy’s Coming 2 America sequel made its debut on Amazon Prime last week rather than in movie theaters, right? Just thought I’d mention that.

In fact, some of those very retailers are now forced to take the lousy $15-an-hour jobs offered at Amazon fulfillment centers in their towns because there’s nothing else. Probably some small manufacturers, too — after all, Amazon isn’t going to insist their Chinese suppliers pay a $15-an-hour minimum wage, are they?

It would be interesting to find out how many of those $15-an-hour Amazon workers weren’t making more at their previous job. It’s a decent bet that as many of them were as weren’t. We’re rapidly moving toward an economy where everything is made in China and then distributed by Amazon, and Bezos’ billions are then funneled into woke advocacy and further economic predation.

It’s been speculated that part of Rubio’s motivation for his shot at Amazon was a reaction to the company’s deplatforming of a three-year-old book titled When Harry Became Sally: Responding to the Transgender Moment, by a Heritage Foundation research fellow named Ryan T. Anderson. The book vanished from Amazon’s website, Kindle store ,and Audible audiobook platform because, as Amazon claimed in justifying their censorship, it frames the transgender argument as mental illness.

Wonder if mentioning the 41 percent suicide rate among post-op transsexuals would get you banished from Amazon’s platforms — as that rate would suggest pretty heavily that Anderson’s framing is more or less spot-on.

We’ve had problems with American oligarchs before. For a long time conservatives, tempted toward a libertarian economic ideal, forgot about the threat the robber barons of old posed to the economy when attempting to corner markets in electricity, telecommunications, oil, and other key commodities and services.

But the Rockefellers, Baruchs, Carnegies, and Morgans at least lavished the cities they inhabited with fabulous civilian infrastructure — museums of art, theaters, zoos, hospitals, and so forth.

What do we get from Jeff Bezos, Bill Gates, Mark Zuckerberg, and the rest?

The Center for Tech and Civic Life, that’s what. We get hundreds of millions, if not billions, of dollars spent on stupid and destructive woke advocacy. We get abuses of the First Amendment and the democratic process. We get rampant violations of the antitrust laws, in spirit if not in letter.

We would be far better off with the Rockefellers, Morgans, and Westinghouses than what we have now.

Give Rubio due credit for realizing it. Lots of other GOP pols have been far too busy taking the Big Tech robber-baron coin to recognize that the old “business v. union” narrative isn’t adequate to the current task, and that unions — particularly private sector unions — are a whole lot less of a threat to capitalism and American freedom than the modern-day oligarchs are.

There’s lots of talk about how the GOP is shifting to a working-class party, and that this is something Trump did. That analysis isn’t altogether wrong, but it misses something — which is that it’s Corporate America that has left the GOP, rather than the other way around.

Trump might have been the first to see that. But others are following suit. And if that means the GOP and the Bernie Bros get together to stick it to Woke Corporate America, then that’s OK.

It’s weird, but so is life in the 21st century. We didn’t make these rules. We don’t even like them. But if we have to play by them, then that’s what we’ll do until we can break the game.