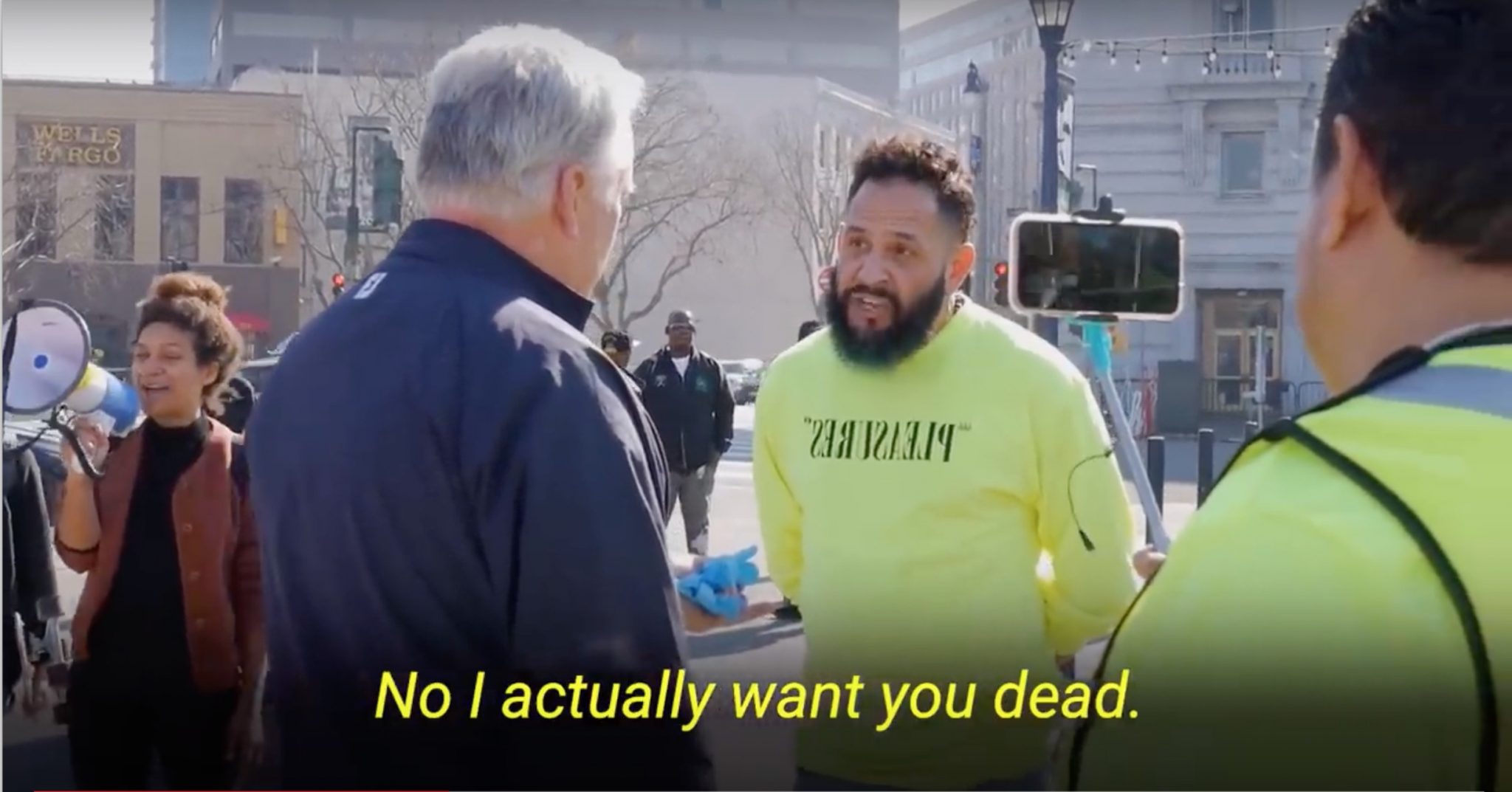 Earlier this month, at a protest against a conservative community cleanup event in San Francisco, John Dennis, congressional challenger to Nancy Pelosi, attempted to engage with one of the protesters. In the video, which has since gone viral, Dennis approaches a man, later identified as Stefan Goldstone, a local DJ and social worker, and asks him why he is so angry, attempting to frame their conflict as a civil disagreement. The man rejects this, saying, “No, I actually want you dead.”

“Because you’re a racist,” Goldstone responds.

Dennis asks how he could know that.

“I can tell by looking at you,” Goldstone says.

Perhaps this is an appropriate time to mention that John Dennis is white. As the exchange continues, the protester steps forward until their faces are only inches apart and says, “Bruh, I’mma catch you when all the cameras aren’t around and I’mma f–k you up.”

Something strange has been occurring around discussions of race in recent years. Gone are the days when our collective understanding of racism was gilded with the words of Martin Luther King Jr. and referred to the sin of mistreating or prejudging someone on the basis of their skin rather than “the content of their character.”

On the left, the definition of racism as “prejudice plus [institutional] power” has gained ascendancy. This stipulative definition was originally proposed in an obscure 1970 book by Pat Bidol, Developing New Perspectives on Race: An Innovative Multi-Media Social Studies Curriculum in Racism Awareness for the Secondary Level. Since then, it has been embraced by those who wish to hijack the cultural power of the word, pervert its moral content, and use it to intimidate their opponents. It is frequently paired with the additional claim that white people are racist by default.

The most significant consequence of this redefinition is that, by this logic, whites cannot be the victims of racism. That’s called “reverse racism,” and it’s a myth; just ask anybody. As Alexia Lafata of Elite Daily writes,

What a relief. Still, in 2017, when four black teens kidnapped and tortured a special-needs white teen on a Facebook livestream, binding his mouth with plastic, cutting his scalp with a knife and forcing him to drink from the toilet while shouting “F–k Trump. F–k white people,” I think some of us were at risk of believing that we had witnessed something horrific, not merely a bruised ego.

In the aftermath, Gene Demby writing for NPR attempted to express his discomfort with using the word “racist” to describe the event:

In calling the kidnapping and assault racism, we’re staking claim to moral language — and uniquely powerful moral language — to which white people can’t easily lay claim, even in cases like the one in Chicago.

In his mind, the issue is with allowing whites access to that moral authority contained within the word “racism.” Those who agree with him are prone to suggest that white people can experience “racial prejudice” but not “racism.” This is a lot like replacing the word “rain” with “liquid precipitation.” But Demby understands the power of language, how “racism” has a force that “racial prejudice” doesn’t. This is doubly ironic. First, only in a country that hates racism would “racist” be a word that carries great moral weight. And second, it was under that definition (racial prejudice) so elegantly expressed by Martin Luther King Jr., that racism came to be understood and despised.

A similar case of denial was recently seen in the UK, which has of late been rocked by the realization that gangs of South Asian/Pakistani men have for years been operating groups for the rape and sex-trafficking of underprivileged white girls while the authorities declined to intervene for fear of aggravating racial tensions. Kate Elysia was a victim of one such gang and in 2018 published a book about her experience, titled No Way Out. She recently revealed that during the editing process with Penguin Random House, she received a letter from an editor objecting to her use of the word “racist” to describe the actions and attitudes of her abusers:

There’s quite a lot of discussion at the moment about whether or not white people can be victims of racism, the argument being that racism is a social issue based on the systemic oppression of a race, tied up in social and economic issues, so facing discrimination for being white isn’t the same as facing racism. I think these statements would detract from what she’s saying, so it would be best to reword them.

This is the problem with letting the mob do your thinking for you: eventually you’re bound to say something unpardonably dumb. On any sane analysis, the “power plus prejudice” model falls to pieces when one considers that these girls, despite being white, were able to be abused by non-white men because those men had greater power. The cult of intersectionality claims to be able to parse such supposedly bewildering collisions of power and victimhood, but its priests are either too stupid or too corrupt to inspire any confidence.

This interaction also demonstrates the foolishness of determining the morality of an act by the removed external circumstances surrounding it. Does an act of “racial prejudice” against a white person become “racist” (and therefore worse) when relocated to a non-white country? Will there be some point when whites and non-whites achieve appropriate parity (a goalpost that is sure to prove extremely mobile) and prejudice against whites will become “racist”? On the left, such questions are rarely asked and never seriously considered. Those who defend the new definition sometimes do so on the grounds of needing a way to talk about racist institutions. But we already had a way of talking about institutional racism. We called it “institutional racism.” To eliminate this distinction is to, in effect, turn a blind eye to certain types of racial hatred.

Lately, leftists are full of talk about the escalation of racial hostilities, but they fail entirely to comprehend their contributions to the problem. I don’t claim that Stefan Goldstone represents the opinions of most left-wing people on race (although his kind of rhetoric is increasingly common). Rather, the problem lies in the fact that leftists have no logical repudiation for that rhetoric. At best, they sound a weak complaint on the basis of civility or optics, a mealy-mouthed inducement to “reject hate,” a hushed “Not like that.”

But this is not a case of some lunatic perverting reasonable points into something ugly. It is the natural outcome of grotesque thinking producing predictably grotesque realities. And for a moment during the confrontation between Dennis and Goldstone, one could glimpse the apotheosis of the Left’s conception of racism, wherein a white person can be threatened and attacked because, by merit of his skin color, he is racist and therefore beneath human consideration. As Bertrand Russell once noted, it is not unheard of for a doctrine, by a course of seemingly natural steps, to be transformed into its opposite. Once “antiracism” can be used to justify attacking someone on the basis of their skin color, what else will it be possible to justify?