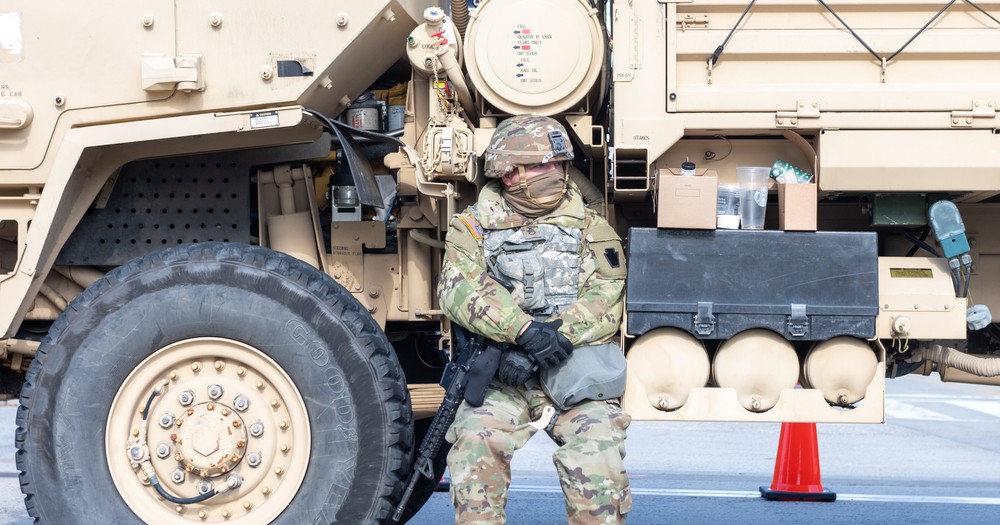 One day after President Joe Biden’s inauguration, Congress hit thousands of National Guardsmen stationed in the Capitol with a gut punch.

Several units stationed within congressional office buildings were abruptly told to leave on Thursday afternoon. Many had been sleeping on the marble floor for days. They were quickly downgraded to concrete. Politico reported that one 5,000-man unit was moved to an open-air parking garage, where the on-duty Guardsmen only had one electrical outlet and two bathrooms among them.

The backlash was swift, and the outpouring of outrage from embarrassed members of Congress was predictable. “Unreal,” tweeted Democratic Sen. Tammy Duckworth after photos of Guardsmen huddled in a garage went viral. “Outrageous,” added Democratic Sen. Jeff Merkley. “Wow,” said Republican Rep. Adam Kinzinger, as he demanded an investigation. No one is letting this crisis go to waste.

But no one should be surprised by it, either. The National Guard’s occupation of the city has been a disaster, start to finish. The 25,000 troops placed here putatively to prevent an inaugural insurrection have consistently been treated as nothing more than props in a bizarre political performance. It’s time to end the show.

Just a few hours after the scandal broke on Thursday, my brother, a pizza man in the Northern Virginia suburbs, had a telling exchange with a Guardsman prepping for a 12-hour Capitol shift beginning at 3:00 a.m.

“Everything is going smoothly,” he said. Looking furtively over his shoulder, he added, “but this whole thing has been a logistical mess.”

He unboxed a crate of 5-Hour Energy bottles and began shoveling them into my brother’s hands. His crew has been guzzling them for the past few days to stay alert, and he thought my brother could use a few, too. He handed him about 20. Then he thanked my brother for the pizza, which he indicated was his first real meal of the day. The military has struggled to feed every on-duty soldier.

That’s only a minor incident in a larger story of mishap. “Zero guidance on mission, length of mission, nothing,” a Guardsman told the New York Times.

Another Guardsman stationed downtown told the Military Times on Thursday that, after the inauguration festivities wound down, he was informed he had 25 minutes to get out of the Capitol. No explanation given. It was crushing news, given that he still has to march around the Hill.

“Everyone here has absolutely zero morale left,” he said.

Understandably, the Guardsmen blamed the congressmen, senators, and Biden transition officials who spent the past two weeks praising them to high heaven for militarizing downtown D.C. and Capitol Hill.

“Dozens of senators and congressmen walked down our lines taking photos, shaking our hands and thanking us for our service,” a Guardsman told Politico, in reference to the inauguration ceremony. “Within 24 hours, they had no further use for us and banished us to the corner of a parking garage. We feel incredibly betrayed.”

He’s right to feel that way. The National Guard was betrayed. Its members were betrayed before they even showed up in D.C. Most of these people just signed up to make a few extra bucks on the weekend — not to parade Biden’s executive might in the face of supposed Trumpian chaos before a fawning television audience. There are few things more degrading than forced participation in someone else’s narcissism.

But that’s unity, I suppose.