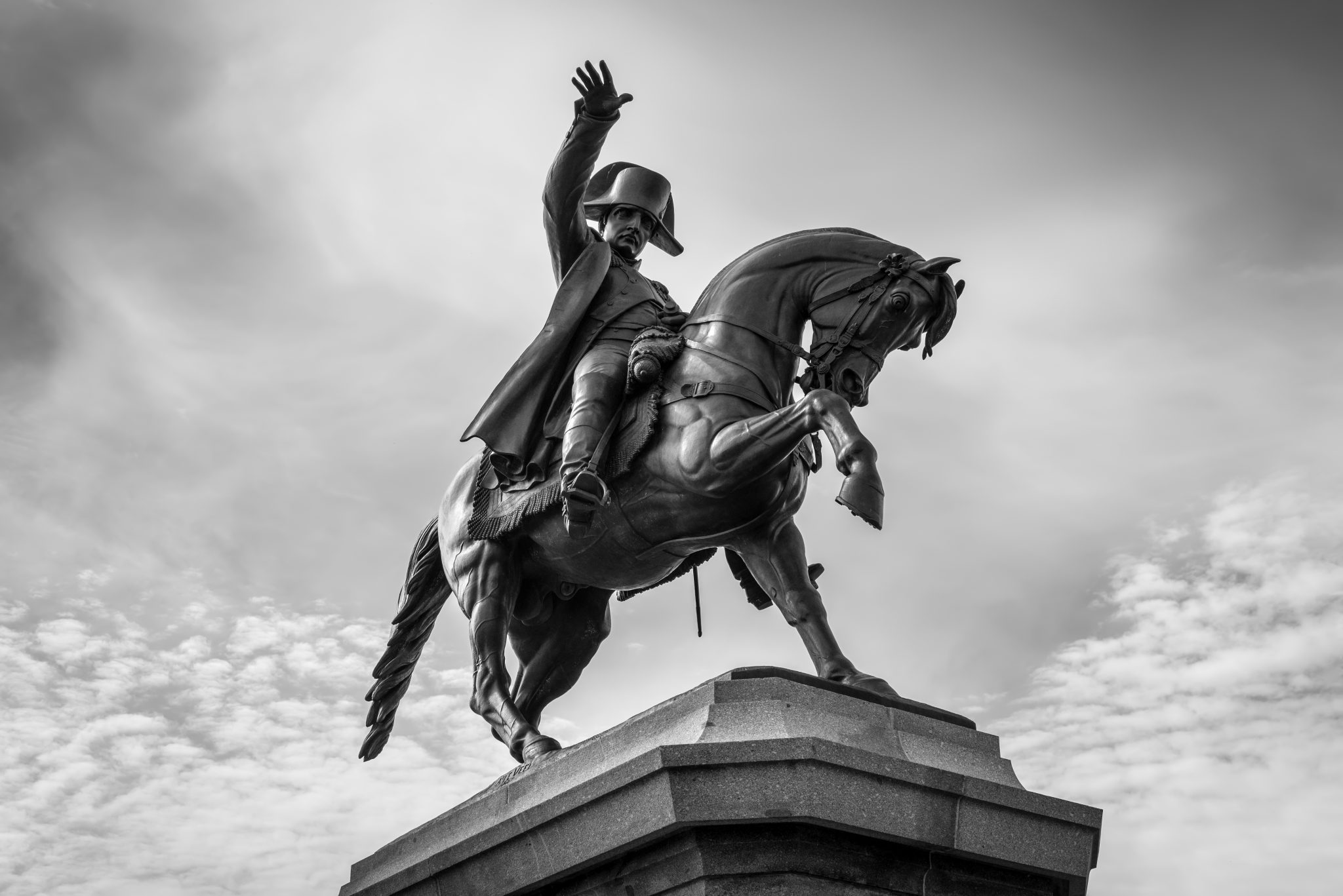 The French, to the degree they pay any heed at all to the reluctant official commemoration of his passing — he died on the south Atlantic island of Saint Helena under heavy British guard (army and navy), on May 5, 1821 — always have been of two, or more, minds about the soldier from Corsica whose battlefield exploits and political and administrative reforms defined modern statist structures in France and influenced them well beyond the country whose greatest legend he became.

Obviously a central figure during 30 tumultuous years in Europe, the man remains incontournable, unavoidable, well beyond the old continent. He and Thomas Jefferson made a deal of the century when he sold Louisiana at a bargain price, advancing the manifest destiny of the land of freedom and dooming France to the limits of its own statist smallness. He returned slavery to the slavery in the Caribbean, from which the French Revolution had nominally banned it. He pioneered, without success, the idea of preemptive nation-building interference in the Muslim world during a short campaign in Egypt, from which he fled, leaving his stricken army in the Levant. His mix of legend and statist legacy endured well beyond France, for better, according to his fans, for worse, according to his detractors. One of the inimitably brilliant snapshots with which Paul Johnson typically enlivens his books (in this instance The Birth of the Modern, 1991) expresses English common sense in the face of myth-making:

William Makepeace Thackeray, then aged five, sent by his parents in India to school in England, landed briefly [on St Helena]. His black servant, Lawrence Barlow, “took me a long walk over rocks and hills until we reached a garden where we saw a man walking.” “That is he,” said Barlow, “that is Bonaparte. He eats three sheep a day and all the little children he can lay his hands on.”

Bonaparte’s tactics, which influenced war-making throughout the 19th century despite their inadequacy in the face of evolving artillery, are still studied at West Point, but, allowing for the essential exception of George Patton, the most “napoleonic” American soldiers have tended to fail — Robert E. Lee is the most famous of these. Albert Sidney Johnson might have pulled off a napoleonic coup on the first day at Shiloh by annihilating the Blues when their backs were at the river, but he was shot in the leg and bled to death. Taking his place, Pierre Beauregard hesitated and decided to wait, which gave U. S. Grant the opportunity for the bold breakout at dawn that won the battle. But on other battlefields Grant, though always supremely aggressive, would not be called napoleonic but can-do because must-do, which when you reflect is also what really defined Patton.

There is a certain irony in Beauregard’s French background, and in that, like the Corsican, he was an artillery officer first; it was he who by his bombardment forced the surrender of Fort Sumter. But if his prudence arguably lost Shiloh (a weak argument; better to say Grant’s somewhat napoleonic elan won it), he must be considered one of the better and more humane Confederate generals. Not by accident was he a pro–civil rights man after the war, and indeed had he not died before the full impact of the Jim Crow regime was felt in his native Louisiana he might have been driven from the homeland for which he gave so much.

Napoleon, by contrast, was a man with no scruples, a ruthless, selfish tyrant who plunged Europe into chaos while turning France into a police state and killing off a tenth of its manhood, a demographic disaster from which it never recovered. His apologists argue reactionary monarchial regimes made ever-changing coalitions against enlightened liberal France, but Bonaparte’s way of ruling, like his way of fighting, required that he be always leading and attacking. He thrived on and needed war. He was madly in love with a beauty from Martinique, but she was no less self-obsessed than he, and she cheated on him shamelessly. To please her planter family he reinstituted slavery in the French West Indies. The Haitian government, with its long trail of voodoo dictators and Tonton Macoute thugs, is his gift if not his doing, no less than is Louisiana’s legal code.

Hegel and Beethoven idolized Napoleon before they hated him, viewing him as a historical force beyond good and evil or, more precisely, first for good, then for evil. Bonaparte at the Arcole Bridge, as depicted by Antoine-Jean Gros, was the preferred poster figure of romantics before the one representing the serial killer Ernesto Guevara took its place. But it is the same idea. In the picture Bonaparte is a general in his 20s leading a revolutionary army into Italy. During the Empire, which in world-historical terms consolidated the Jacobin Revolution in France and ensured its catastrophic influences elsewhere, large chunks of Italy were annexed by France but were soon lost.

Paul Johnson points out that Napoleon’s plan in the great Russian campaign was to take Moscow and name himself Emperor of Europe. He was no patriot: France was only an instrument of his ambition. But Moscow burned, and the Corsican gang leader, disguised as a traveling salesman, abandoned his men to the Cossack raiders and fled back to Paris, where the Austrian princess for whom he had dumped his wife Joséphine de Beauharnais awaited demurely, as did failed coup-plotters, whom he shot.

Victor Hugo, scourge of tyrants and champion of the poor and oppressed (he lent the power of his prolific pen to the Abolition movement), lost all sense of proportion in his admiration for the man who invented the modern coup d’etat and who, by the bloodletting he caused, can, with the Jacobin revolutionists, reasonably be blamed for France’s long decline. Hugo made up for this myopia with his detestation and ceaseless pamphleteering against the heir, whom he called “Napoleon the Small,” who lost Alsace and Lorraine to the Prussians come to show off what they had learned learned from their defeats a generation earlier. Hugo’s father was a Bonapartist general; that could explain it. The same may be guessed of another great French writer, Alexandre Dumas; his father, Thomas-Alexandre Dumas Davy de la Pailleterie, the child of a white planter and an African slave, likewise rose in the Napoleonic campaigns — brigadier, divisional, and corps — before dying at age 43.

Why the French should be making anything of this man just because the calendar says May 5 is a mystery. He has a nice place of rest at the handsome Invalides building close to the Eiffel Tower (Antony Blinken attended a school around there, but this must be a coincidence of no symbolic significance), so I say let it be. Let the mystery be.