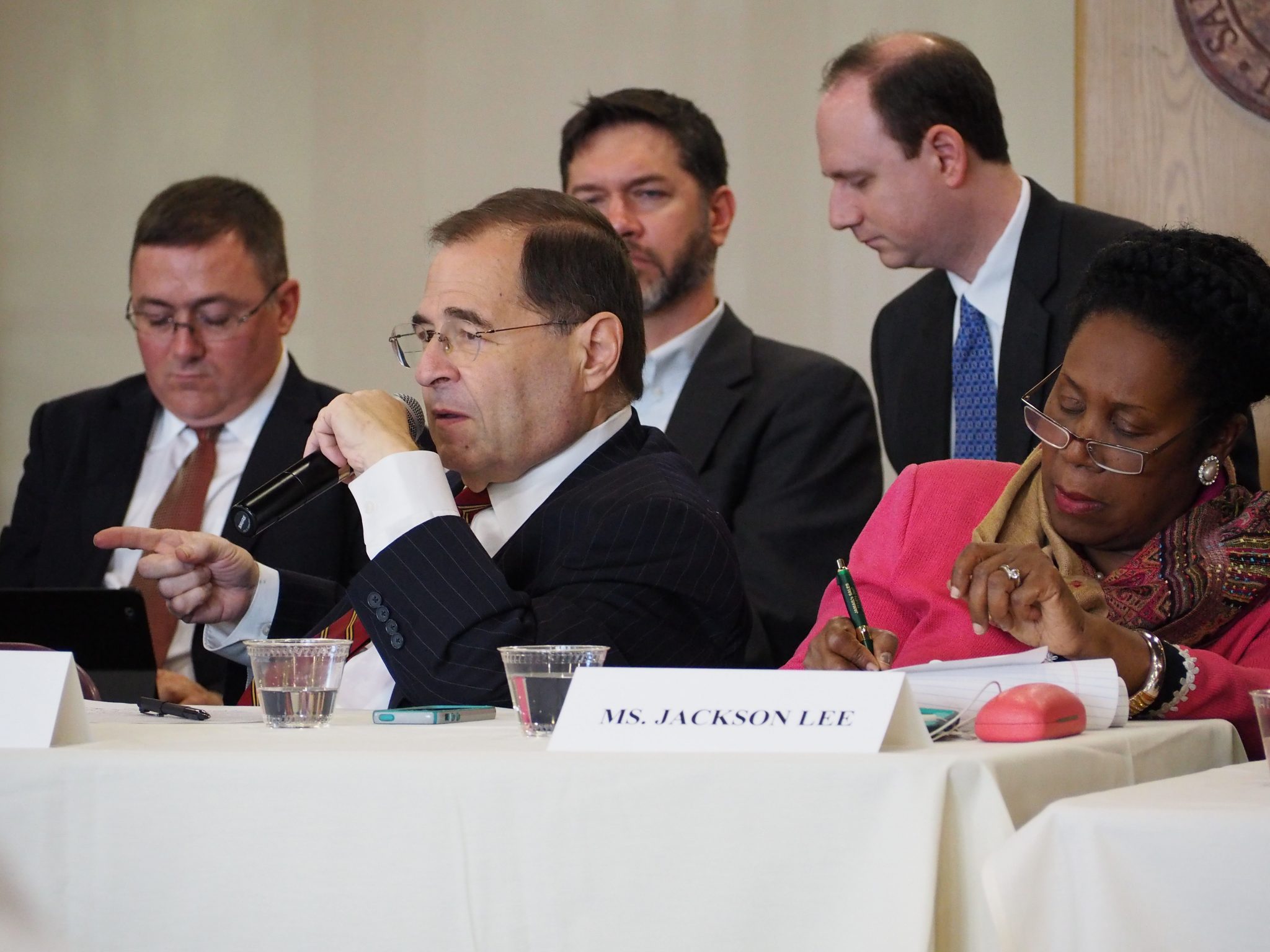 Life is interesting, isn’t it? And when the Democrats roll out “the Resistance,” their pathetic public corruption of our social contract, life also takes on aspects of shamefulness and hypocrisy.

Take, for example, Act Two of their seasonal theatrical production, the Phantom of the Congress.

We the audience now return from intermission to find Adam Schiff, the villain of Act One, missing and replaced by Jerrold Nadler, who seems less despicable because, beneath the surface, he is oh-so-vulnerable, oh-so-compromised, and oh-so-neutered. We wonder what has transpired during the period that the intermission passed over: Legislation to reduce the cost of prescription drugs and to get control over health care? Passage of the USMCA Trade Agreement among Mexico, Canada, and the United States? Military funding authorizations?

Nope. None of it. It turns out that the intermission happened in real time, like Jack Bauer’s 24 television series. And nothing happened during intermission. Meanwhile, the stage hands have changed the scenery from the House Intelligence Committee to the House Judiciary Committee, while borrowing some of the props from the previous scene, including the big leather chair. And now we find Nadler presiding over the “judicious” contemplation of the Intelligence Committee Report, comprised of a Schiff-load of malarkey derived from hearings — some “star chamber” secret and some public — that were tailored to deny Republicans the right to call critical witnesses, interrupted and cut off Republicans sometimes mid-sentence, and ultimately defaulted to resting on hearsay, innuendo, guessing, and presumptions.

None of that kind of secondhand guessing matters as evidence or testimony in a real justice system, only in a corrupt sham of a proceeding. Most Americans are not aware of a secret known only to a limited number of law academics and professors — and to those of their students who took good notes and remembered what they learned even after final exams. To wit: There is a legal principle known as the “legislative privilege.” Under that rule, any legislator can say in the Senate or in the House of Representatives any darned thing he or she feels like saying, and the law shields the legislator from being sued for defamation. Thus, Harry Reid can lie on the Senate floor and say that Mitt Romney failed to pay his income taxes for 10 years, with Reid knowing full well that he is outright lying through his teeth, and Romney cannot do a thing about it. In the same way, Schiff can lie all he likes while in the House chamber, and he cannot be sued. Same with all the others. Same in the Senate. Democrat senators can lie about Brett Kavanaugh at his confirmation hearings, and they cannot be sued. Even Blasey Ford could fry-whisper all her lies and cannot be sued based on what she testified in the Senate chamber. That’s the “legislative privilege,” and the protection applies to all who speak inside the House or Senate, even witnesses. Did you know that? Heckuva thing, no?

In the same way that elected representatives can lie without consequence when they stay in their playground facility, they can also make corrupt and deviant rules without consequence. In a real court of law, for example, hearsay is inadmissible. There is a reason, and one does not need to be an attorney to understand this. In all your own life, did it ever happen that someone told you something bad about someone else (the “target”) behind that other person’s back, and then you reported it back to the targeted person or demanded that the targeted person take responsibility for the wrong he or she did — and then that person came back at you and said, “What in the world are you talking about?” And then you told the person what you had been told secondhand, and that targeted person not only denied it but also demanded that you and he together now go to the initial gossiper and confront him or her. And then you went back to the source, the original tale-bearer, with the targeted person standing alongside you, and the gossiper then suddenly said, “I never said that!”

That is why we do not admit hearsay in front of a fact-finder. Rather, if someone has something to say, come on in and testify to it (i) under oath and (ii) in front of the person you are accusing. It is amazing how much a story changes when (i) the witness faces perjury charges if inaccurate and (ii) the target of the bad-mouthing is sitting right in the room, staring at the person as he or she speaks. That is why our Founding Fathers added this tidbit to the Constitution’s Bill of Rights:

In all criminal prosecutions, the accused shall enjoy the right to a speedy and public trial, by an impartial jury of the state and district wherein the crime shall have been committed, which district shall have been previously ascertained by law, and to be informed of the nature and cause of the accusation; to be confronted with the witnesses against him; to have compulsory process for obtaining witnesses in his favor, and to have the assistance of counsel for his defense.

To be confronted with the witnesses against him. Short, sweet, and to the point. None of this stuff about “I didn’t hear it, but this one told me that he heard it from that one.” Or “I already told you, congressman, I did not hear it. I never said I heard it myself. I was only presuming.”

As the world turns now to Nadler and his House Judiciary Committee, the sham is that Nadler is going to make believe that he and his committee are impartial judges, as they would have the public infer from the name of the committee. They want us to believe that now these impartial judges, with not a whit of personal interest or pecuniary concern and no pre-formed opinions, will objectively evaluate the Schiff-load of documents presented and will objectively, judiciously, fairly, and dispassionately adjudicate whether or not the president should be impeached. Nadler would have the public understand, in evaluating whether or not there was a quid pro quo, that he himself is above it all.

But he is not. And Nadler knows it.

Nadler has been in Congress for 27 years. Basically, a Liberal Democrat Congressman named Ted Weiss dropped dead literally the day before the 1992 New York primaries, and the party basically gave the open seat to Nadler. It is a super-safe Democrat Liberal district that has not gone Republican for more than a century. Nadler now is in his 70s, no longer a spring chicken. His job is safe and sound as long as he does not face a Democrat primary — and he never does. At age 72, after nearly three cushy decades in the seat, he simply is not up for a primary. Think: Joe Crowley. Nadler is not about to go walking the district, knocking on doors, glad-handing, and begging for votes. After a quarter century, he is like the other septuagenarians in that situation, comfortably ensconced in power, unable to give it up, yet unable to campaign vigorously for it. At the first whisper of “Primary!,” they throw in the towel.

Jerrold Nadler has been given marching orders, not so much by Adam Schiff or Nancy Pelosi as by the 11-syllabled Alexandria Ocasio-Cortez. If you impeach Trump, then we do not run a primary challenger to replace your Judiciary butt. But if Trump escapes impeachment because your committee fails to nail down Schiff’s dirty work, then we primary you and run you out of town. Quid. Quo. In 11 syllables.

That is what this week will be all about: three Latin words and 11 Latina syllables. Pro. Quid. Quo. Impeachment of Trump or primary for Nadler. A woman named Lindsey Boylan awaits the siren call. That simple. Res ipsa loquitur.