What do Vladimir Putin and International Women’s Day have in common? Both were promoted by the KGB.

All good jokes contain an element of truth. And there’s nothing not true about that one.

Every year going back a century, communists rolled out the red carpet for International Women’s Day. Today, Big Tech and left-wing media are shockingly doing the same. I would say that I never thought I’d live to see the day, but that wouldn’t be honest. Our colossal ignorance of communism, bred by our horrible universities, where professors have long been sympathetic to or duped by elements of Marxist thought, helped train this ignorant breed of modern Millennial who, incredibly, celebrates a holiday that was a holiday in the communist world.

Am I surprised? Certainly not.

For several years now at The American Spectator, I’ve chronicled this crazy sudden celebration of International Women’s Day, including calling out various annual corporate sponsors/suckers, such as McDonald’s and Caterpillar. It has only gotten worse. The socialist holiday is taking on a momentum of its own, and with the slick assistance of Big Tech, there’s apparently no stopping it.

Speaking of slick, the current website for International Women’s Day wraps itself not in the flag of the Soviet hammer and sickle but, you guessed it, “diversity.” The web page drips with it, beginning with this sloganeering:

Imagine a gender equal world. A world free of bias, stereotypes and discrimination. A world that’s diverse, equitable, and inclusive. A world where difference is valued and celebrated. Together we can forge women’s equality. Collectively we can all #BreakTheBias.

But in short order, the IWD gals quickly veer to collectivism, which makes more than one appearance on the opening page of the website:

Collective action and shared ownership for driving gender parity is what makes International Women’s Day impactful. Gloria Steinem, world-renowned feminist, journalist and activist, once explained “The story of women’s struggle for equality belongs to no single feminist nor to any one organization but to the collective efforts of all who care about human rights.” So make International Women’s Day your day and do what you can to truly make a positive difference for women.

Spot on, comrades! There are several nods to the glories of “collective action” on the page — and alas, “shared ownership.” Note the angle of the gender-cultural Marxists: common ownership not of the means of production, but common ownership of the drive for “gender parity.”

Thus, the international women’s worker-ettes at the IWD website let their guard down occasionally with their language, but not too much. Prudently absent from the website is the lengthier history of the holiday that more honest (or less careful) IWD worker-ettes posted just a few years ago. That history had a lot more material on IWD matron, Clara Zetkin, a leader of the German socialist movement and international working women’s movement. 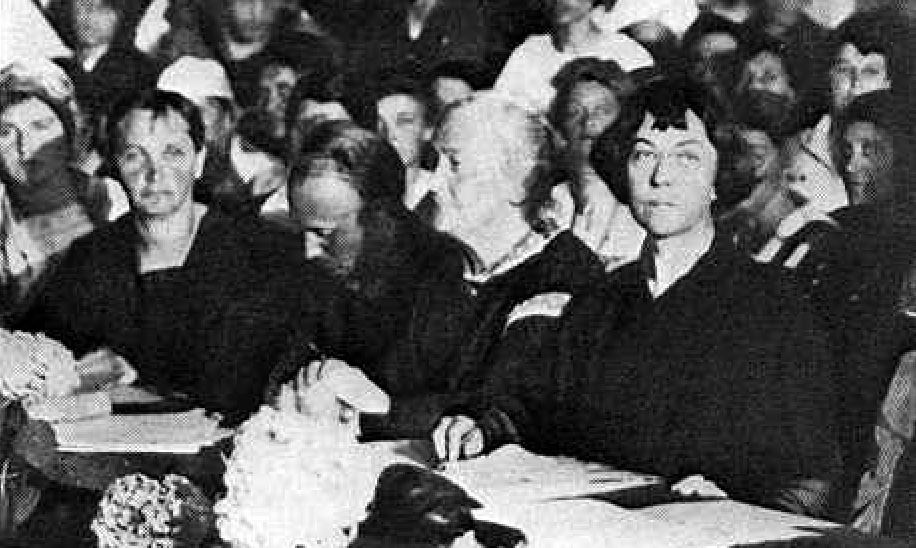 At the current website, this is better concealed (increasingly so each year). The “About” section tucks away a hyperlink to the history at the word “timeline.” If you click that hyperlink, you immediately get an image of an old socialist propaganda poster by German socialist artist Karl Maria Stadler and an abbreviated history that has a few whitewashed lines about Clara Zetkin, described not as a socialist but as “Leader of the ‘Women’s Office’ for the Social Democratic Party in Germany.”

I predict that old Clara will eventually get purged by today’s IWD leaders. Many inconvenient comrades, of course, found themselves liquidated when their presence became harmful to the cause. The women running IWD’s website today know better than to openly quote Marx and Lenin and the likes of Aleksandra Kollontai, which might make even the typical 20-something at Google suspicious (well, maybe).

Speaking of Aleksandra, it would be cruel to not give her due on this glorious day of the woman worker.

Kollontai was the leading feminist of the Bolshevik regime. A sort of Soviet version of Eleanor Roosevelt, she was appointed People’s Commissar for Social Welfare by Lenin. In 1919, she founded Lenin’s “Women’s Department.” An early sexual feminist, Kollontai was an advocate of so-called “free love,” much like her American ally, Margaret Sanger, the Planned Parenthood founder, racial eugenicist, and speaker to the KKK. In her 1920 Marxist classic, Communism and the Family, Kollontai wrote: “There is no escaping the fact: the old type of family has had its day. The family is withering away not because it is being forcibly destroyed by the state, but because the family is ceasing to be a necessity.”

I heartily implore all celebrants of International Women’s Day to read Kollontai’s 1920 statement marking the great holiday. It is lengthy, but here’s a choice excerpt, as Aleksandra captured the true meaning of what she rightly called this “general holiday for all the proletariat”:

The 8th of March is a historic and memorable day for the workers and peasants, for all the Russian workers and for the workers of the whole world. In 1917, on this day, the great February revolution broke out. It was the working women of Petersburg who began this revolution; it was they who first decided to raise the banner of opposition to the Tsar and his associates. And so, working women’s day is a double celebration for us….

In 1910, at the Second International Conference of Working Women, Clara Zetkin brought forward the question of organizing an International Working Women’s Day. The conference decided that every year, in every country, they should celebrate on the same day a “Women’s Day” under the slogan “The vote for women will unite our strength in the struggle for socialism”….

“Working Women’s Day” was first organized ten years ago in the campaign for the political equality of women and the struggle for socialism. This aim has been achieved by the working class women in Russia. In the soviet republic the working women and peasants don’t need to fight for the franchise and for civil rights. They have already won these rights.

The notoriously long-winded Aleksandra said much more (read it and more from Aleksandra’s archive at Marxists.org). The goal was to seek “the victory of communism [and] complete and fundamental equality of women.” To that end, Aleksandra quoted the declaration of the Soviet Third International:

“Working women of all countries! Organize a united proletarian front in the struggle against those who are plundering the world! Down with the parliamentarism of the bourgeoisie! We welcome soviet power! Away with inequalities suffer by the working men and women! We will fight with the workers for the triumph of world communism!”

As for the millions of modern Americans who don’t know better, and blithely seek to impress their friends with a smiley-face “Happy IWD!” post on their social media, they are merely dupes to the larger cause.

Aleksandra and Clara and friends would be greatly appreciative of their support.

Paul Kengor
Follow Their Stories:
View More
Paul Kengor is professor of political science at Grove City College in Grove City, Pa., and senior academic fellow at the Center for Vision & Values. Dr. Kengor is author of over a dozen books, including A Pope and a President: John Paul II, Ronald Reagan, and the Extraordinary Untold Story of the 20th Century, The Politically Incorrect Guide to Communism, and Dupes: How America’s Adversaries Have Manipulated Progressives for a Century.
Most Popular
1
Hither and Yon
POTATUS Speaks, A Nation Groans
by Scott McKay