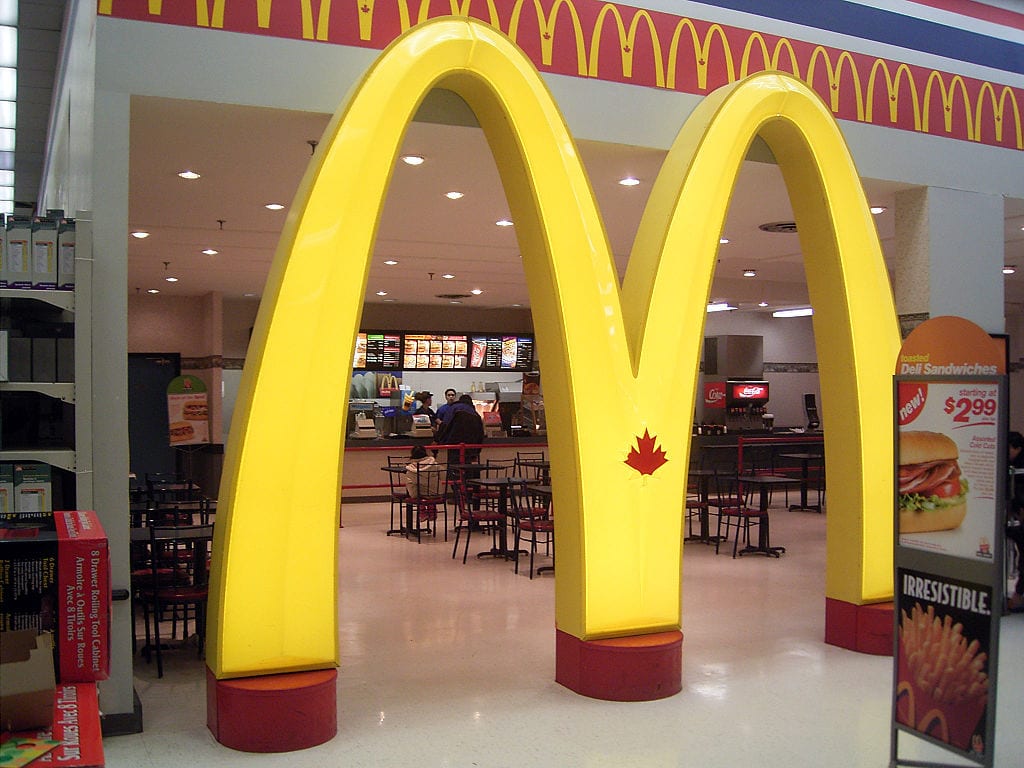 As official chronicler of dupes hoodwinked by the communist movement, I bestow this year’s International Women’s Day sucker award upon McDonald’s restaurant chain. Last year at this august publication I recognized the guys at Caterpillar. This year, I confer the dubious honor upon McDonald’s.

For the uninformed, International Women’s Day — heralded boldly and colorfully all day yesterday by the political saps at Google — was a communist-socialist holy day spearheaded by the notorious Clara Zetkin. If you think that’s a stretch, or some McCarthyite conspiracy theory, then simply go to the website of International Women’s Day and click the “About” tab, where you’ll find this self-reported (and commendably honest) timeline:

1909
In accordance with a declaration by the Socialist Party of America, the first National Woman’s Day (NWD) was observed across the United States on 28 February. Women continued to celebrate NWD on the last Sunday of February until 1913.

1910
In 1910 a second International Conference of Working Women was held in Copenhagen. A woman named Clara Zetkin (Leader of the ‘Women’s Office’ for the Social Democratic Party in Germany) tabled the idea of an International Women’s Day. She proposed that every year in every country there should be a celebration on the same day – a Women’s Day – to press for their demands. The conference of over 100 women from 17 countries, representing unions, socialist parties, working women’s clubs – and including the first three women elected to the Finnish parliament – greeted Zetkin’s suggestion with unanimous approval and thus International Women’s Day was the result.

1911
Following the decision agreed at Copenhagen in 1911, International Women’s Day was honoured the first time in Austria, Denmark, Germany and Switzerland on 19 March. More than one million women and men attended IWD rallies [….]

1917
On the last Sunday of February, Russian women began a strike for “bread and peace” in response to the death of over 2 million Russian soldiers in World War 1. Opposed by political leaders, the women continued to strike until four days later the Czar was forced to abdicate and the provisional Government granted women the right to vote. The date the women’s strike commenced was Sunday 23 February on the Julian calendar then in use in Russia. This day on the Gregorian calendar in use elsewhere was 8 March.

There you go, from the Socialist Party of America to the Social Democratic Party in Germany — which included Herbert Marcuse, pioneer of cultural Marxism at the infamous Frankfurt School — to Clara Zetkin to “working women’s clubs” to the Bolsheviks. Forward!

All of which merely affirms McDonald’s sheer ridiculousness for stepping forward as proud sponsor of International Women’s Day — like a Big Mac stuffed with crow rather than beef or whatever they insert between the patties. Who’s running marketing at corporate headquarters at Mickey D’s nowadays? No doubt a gaggle of enlightened progressives fresh out of some Ivy League ideological asylum.

Or are the big boys around the corporate table at McDonald’s actually fans of the Bolshies?

Speaking of which, Vladimir Lenin and his cohorts would chortle at the prospect of America’s iconic fast-food franchise — capitalist reptiles he would have dubbed them — blissfully forking over big bucks to back one of Marxism’s favorite anti-capitalist holidays. Lenin had a term for such chumps: he called them useful idiots.

Could this be the launch of a new ad campaign for McDonald’s? I can envision photoshopped propaganda posters of a dazzling comrade Clara, or Alexandra Kollontai, or Rosa Luxemburg, or Herbert Marcuse’s prized student, Angela Davis, hoisting a Quarter-Pounder in front of an old Soviet red flag or hammer and sickle. Eat, comrade! How about Lenin’s grimacing wife, Nadezhda Krupskaya, posing with a lovely Egg McMuffin? That is, if you could get her to smile. Maybe a Happy Meal? How about Ethel Rosenberg chomping some Chicken McNuggets?

Now there’s a new PR push to turn heads toward the golden arches.

Embarrassing, McDonald’s. Really embarrassing. Ray Kroc, a conservative Republican from the Midwest, born of Czech immigrants, is rolling over in his grave.

We expect such gullible obliviousness from the silly Millennials slobbering their politically correct platitudes at Google. They’ve been “educated” into ignorance by our leftist universities. They’re clueless to any of this serious history. But the old dudes at McDonald’s?