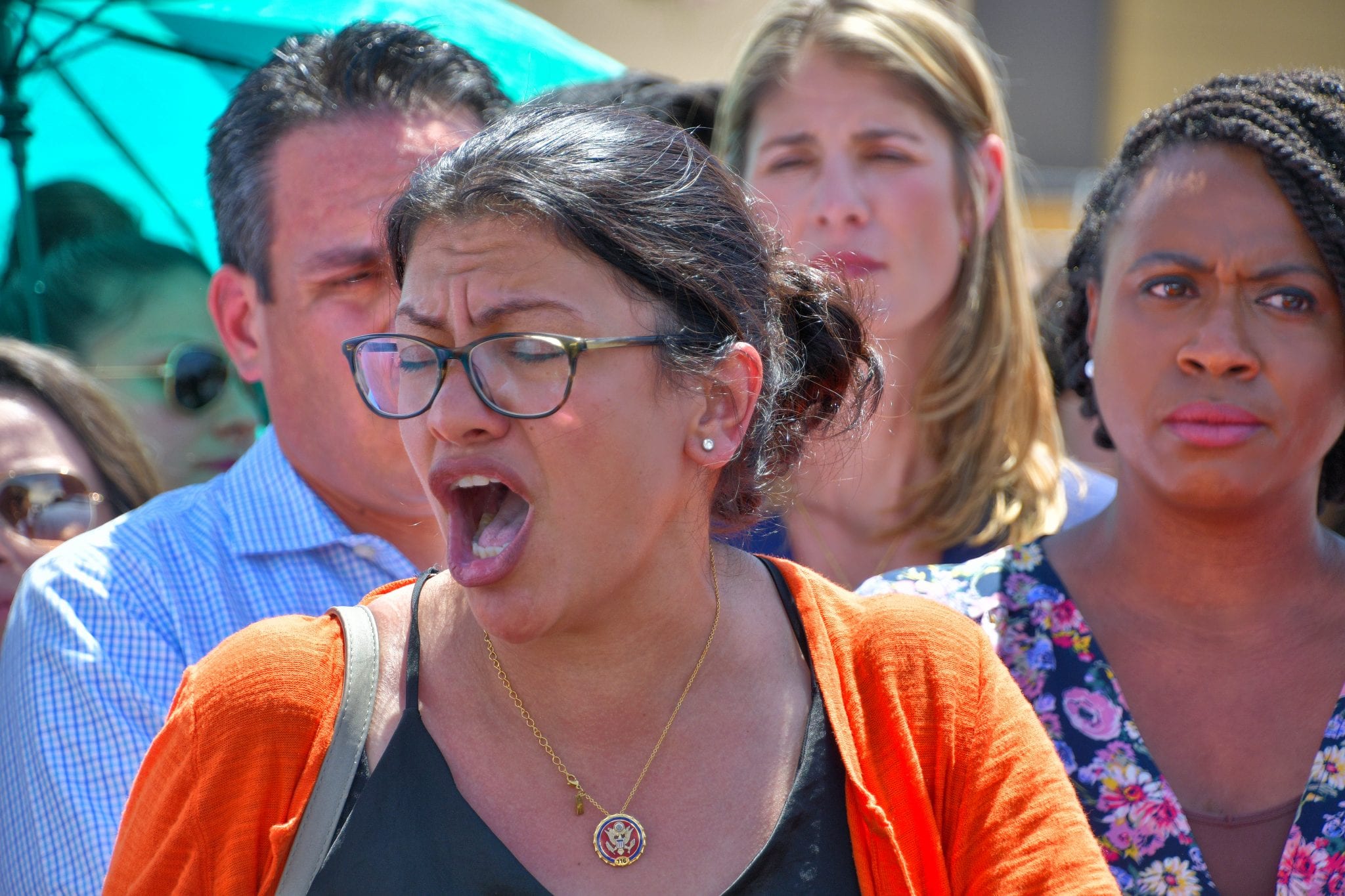 When I first heard that Donald Trump went after Ilhan Omar, Rashida Tlaib, and Alexandria Ocasio-Cortez (I had not heard of Ayanna Pressley), I immediately expressed gratitude that someone had the guts to push back. These three congresswomen are unhinged, a fact further revealed a week earlier in the “testimony” of a brazen AOC and a half-sobbing, ready-to-burst Tlaib. The depth of the radicalism of the AOC-Tlaib-Omar troika, in full display after only a few months in Congress, is difficult to express.

Perhaps worse, given the context of their current battle against President Trump over divisive language, is that few congressional freshmen in memory have been as out-of-the-gate acrimonious as AOC, Tlaib, and Omar.

AOC, remember, had just compared our border detention centers to Nazi concentration camps, and then doubled down on it.

Evoking the language of the Holocaust, she continued: “I want to talk to the people that are concerned enough with humanity that ‘Never Again’ means something,” employing the warning of Holocaust survivors. “The fact that concentration camps are now an institutionalized practice in the home of the free is extraordinarily disturbing.”

I have Polish friends who were really upset at AOC suggesting our border camps are comparable to Auschwitz. They had family who were turned into lampshades in such camps. Did Bernie Sanders, who had relatives killed in concentration camps, denounce AOC? Did CNN devote a smidgen of criticism? If CNN and MSNBC criticized her, it wasn’t at the level of their current meltdown over Trump.

And how did Democrats respond? They gave AOC a platform to testify on immigration policy. They didn’t denounce her offensive stupidity; they rewarded her and accorded her the seat of an expert.

Next to her, the Democrats sat Rashida Tlaib. Tlaib is such a healer of the partisan divide that, minutes after her swearing-in (with her little boy next to her), she vowed to a room of howling, stomping, clapping liberals, “We’re gonna impeach the motherf—er!”

To watch Tlaib and AOC sanctimoniously testify with impunity really bothered millions of Americans. Frankly, it was sickening. It clearly got under Donald Trump’s skin.

And as for Ilhan Omar, where to begin? Let’s just state the obvious: She’s to the left of all of them, a paragon of rancor and division.

Why do you think even Nancy Pelosi wants nothing to do with these three ideological bomb-throwers dominating her party?

All of this brings me to the controversy that erupted over Donald Trump’s tweets. I’d like to pose a simple question: Does anyone doubt that the media would have gone wild on Trump regardless of what he said in those tweets? Think about it. I say that as someone who has never defended Trump’s tweets — quite the contrary. (Speaking of women, remember what Trump had previously tweeted about Heidi Cruz?) Yes, the precise language of President Trump’s tweets gave liberals ammunition. Even then, if Trump had merely fired off a counter-response, without the “go back” remark, the media would have pounded him regardless because he dared to confront four “women of color” who are “progressive” members of Congress. Four “women of color” who are conservatives would never have been so vigorously defended.

Setting aside Pressley, whom I know nothing about, the three socialist musketeers of AOC, Omar, and Tlaib have an extraordinary ability to open their mouths and draw attention to themselves. In response, liberals have embraced them and urged them further left. They’re the literal poster girls for the Democratic Socialists of America and the Justice Democrats. If you visit the websites of such groups, you’ll see images of the three women’s profiles together, appropriately gazing leftward to the sunny optimism of collectivist utopia. They adorn the lead page, and even the mastheads, of progressive websites. They are the face of the New Left, of today’s Democratic Party. And yes, the Left is already selling T-shirts of the Squad. The Left loves the Squad.

That means something important going forward: The Squad is morphing into the Untouchables. Watch and see: In short order, if not already, criticism of these three will be reflexively denounced by the mass of liberaldom as racist and sexist. The beatification process is already underway. The members of the Squad are appearing together in TV interviews stoically framing themselves as (in AOC’s words) “fighters” for “justice” against the evil Trump’s “weaponized” “bottom-to-the-barrel vitriol.” Last week, with President Trump rolling his Twitter grenade, was portrayed as a political martyrdom for these poor, unfortunate, mild, meek, silent lambs.

The Squad will become the Untouchables.