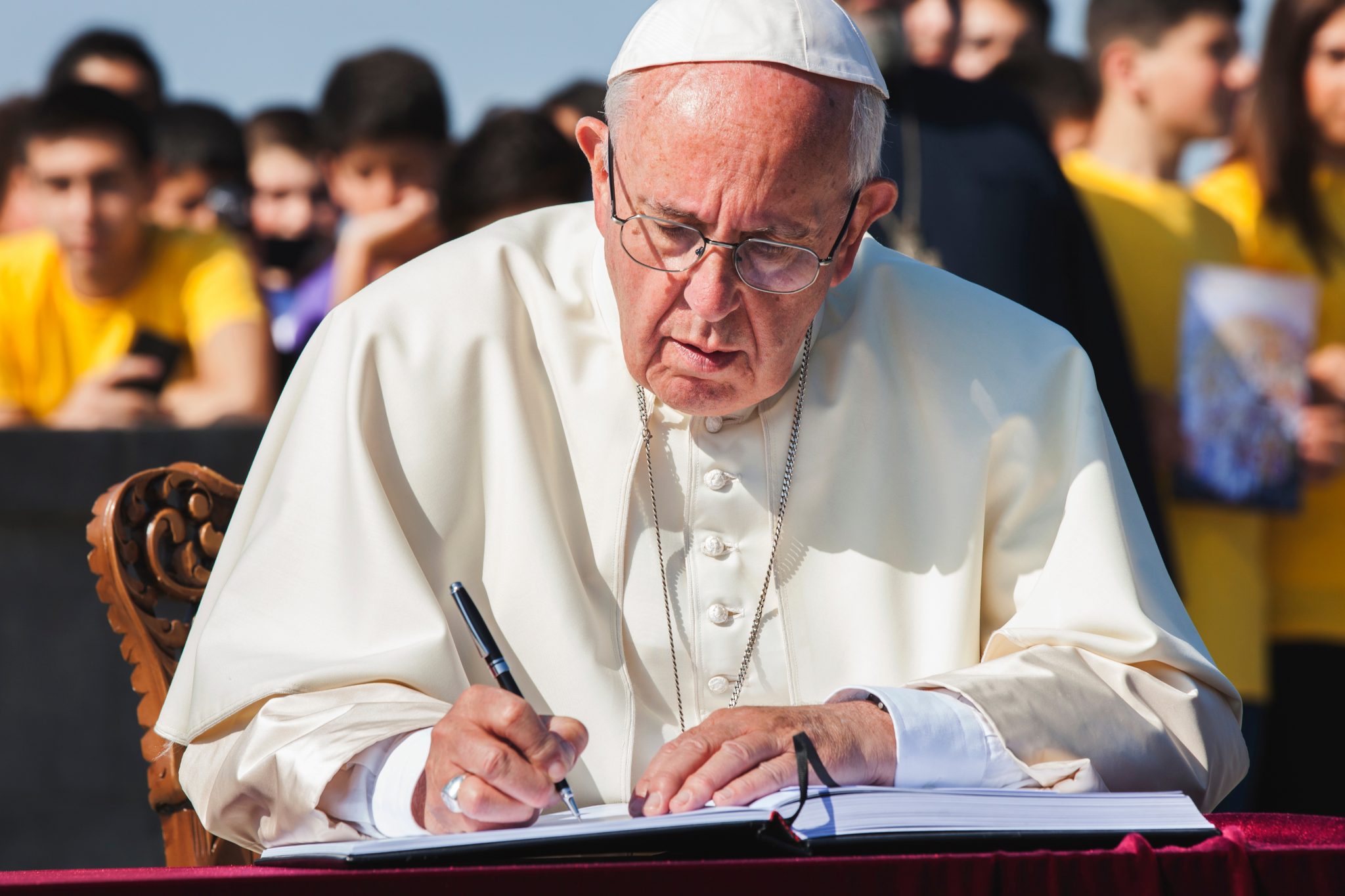 “For things will never be perfect, until human beings are perfect — which I don’t expect them to be for quite a number of years!”

To what shall I liken reading one of Pope Francis’s encyclicals?

It’s like a man taking a bite of a savory, beef empanada in downtown Buenos Aires, only to discover inside of it a shard of glass. He purchases another, hoping that the first was just bad luck. When he finds glass in the third pastry, however, he concludes that the chef is either incompetent or simply doesn’t like him very much.

Published over the weekend, Francis’s third encyclical, Fratelli Tutti (“Brothers All”) urges us to consider a universal fraternity among all peoples, which conquers hatred and “empty individualism,” so that we can “dream as a single human family.” The letter consists of eight chapters, divided into 287 paragraphs. It covers such diverse topics as war, politics, poverty, friendship, human trafficking, international relations, economics, private property, and migration.

At more than 43,000 words, Fratelli Tutti — which the Vatican website informs us “has set off a wave of appreciation throughout the Catholic Church” — is by far the pope’s longest and most ambitious encyclical. It might also become his most controversial, although it will be hard to beat Laudato Si’, his 2015 work on environmental degradation, global warming, and consumerism.

To date, the only sizable “wave of appreciation” seems to be among the American press, which sees the encyclical for what it is — a full-throated attack on market capitalism, populism (read Trump), “empty individualism,” and a “politics … that hinder[s] progress towards a different world.” There’s even speculation that the document’s substance and timing indicate a sort-of papal endorsement of Joe Biden in the November elections.

On its website, the Vatican calls the encyclical a “radical blueprint for a post–coronavirus world.”

Radical, it is; a blueprint, it is not, since that implies a detailed plan or program of action. As much as it pains this devout Catholic to say, Francis’s new encyclical — though well-intentioned and offering numerous profound insights — is ultimately little more than a Utopian fantasy. It’s as majestic and ambitious as it is wrongheaded, naive, and dangerous.

Since his election in 2013, Pope Francis — né Cardinal Jorge Mario Bergoglio of Argentina — has been an extraordinary pontiff in many ways. He is the first priest from the new world to be elevated to pontiff. He’s the first Jesuit. He’s the first to sign an encyclical outside of Rome in 200 years. He’s even the first to take the name of St. Francis of Assisi.

With Fratelli Tutti, the pope garners a few more historic firsts: He’s now the first to eliminate the church’s “just war” theory; to ban the use of the death penalty in all cases; to challenge the existence of national borders; to relegate private property rights to “secondary” natural rights; and to call for muscular, expanded world government on matters related to the economy, environment, and migration.

Oh, yes — and Francis also earns the title as the harshest critic of free-market economics ever to sit in the Chair of St. Peter.

Whether it’s because he’s a secret fan of liberation theology, or just a product of left-wing Jesuit training in his socialist Argentina, Francis hates capitalism. He’s issued several letters and encyclicals critical of free-market economics, though his defenders claim that he’s only against capitalism’s “excesses.” In 2015, he famously called the “unfettered pursuit of money” the “dung of the devil.” In a 2017 address, he condemned “the economic system that has the god of money” at its center,” warning that “[t]he system’s gangrene cannot be whitewashed forever.” In Laudato Si’, he blamed capitalism as a main driver of climate change.

Sadly, the pope seems to lack the aptitude — or, more likely, the willingness — to understand even basic economic concepts.

In light of the length of the encyclical, a dozen articles will have to be written by more astute Francis observers than I (George Neumayr, George Weigel, and The American Spectator‘s R. Emmett Tyrrell, Jr.) to unpack it completely. For now, I want to point out a few of the more disturbing aspects of the letter that caught my eye.

Although the pope never uses the “c” word, that doesn’t keep him from lambasting it at least 35 times (by my count) in his letter. He generally resorts to straw man arguments, directing his ire at vague, comically exaggerated caricatures, rarely linked to a specific country or event. Throughout my review, I found myself saying, “Get specific! Name names! Give us the costs!” I also wanted him to compare his bugbear “neoliberalism” to more, ahem, “social” economic systems that he thinks would yield better results.

As always with this pope, any criticism of China’s communist system, with its vast networks of oppression, is conspicuously absent. This is especially galling in the context of this encyclical. In fact, Francis mentions closed and socialist economies only once, admonishing “leftist ideologies” for “individualistic ways of acting and ineffective procedures.” What does it say about so-called brotherhood among nations that Francis can’t call the evil of Chinese communism by its name?

Instead, he lashes out at his usual bugaboos, including “limitless consumption,” “profit-based economic models,” “a liberalism that serves the economic interests of the powerful,” “radical individualism,” the “efficiency-driven paradigm of technocracy,” and so on. He berates those who would “have had us believe that freedom of the market was sufficient to keep everything secure,” and other “dogmas of neoliberal faith,” which “resort to the magic theories of ‘spillover’ or ‘trickle’ … as the only solution to societal problems.”

Such shallow statements make him sound more like Greta Thunberg than the leader of the Roman Catholic Church.

In order to achieve “the politics we need,” Francis calls for a new breed of politician, one who recognizes politics as “a lofty vocation and one of the highest forms of charity.” Unfortunately, he’s stuck with all the usual suspects. His solution? “Political love,” which requires politicians with “a gaze transformed by charity” — and who definitely don’t act like the ambitious, self-serving, ballot-counting rascals that they are — to make enlightened, selfless decisions for the people. “That gaze is at the heart of the authentic spirit of politics,” writes Francis. “It sees paths open up that are different from those of a soulless pragmatism.”

Perhaps realizing the absurdity of such a hope, he hedges, “It may seem naïve and Utopian, yet we cannot renounce this lofty aim.”

These are not the arguments of a person who understands the actual practices of free-market economies or the principles that govern them. Nor does Francis demonstrate a keen understanding of human nature, particularly as it relates to highly flawed people like politicians, UN bureaucrats, and members of NGOs.

Don’t worry, though, because his intentions are good, which is always the essential point when it comes to progressive government programs. As Francis tells us elsewhere: “If anyone feels offended by my words, I would respond that I speak them with affection and with the best of intentions, quite apart from any personal interest or political ideology.”

There are many humane and wonderful aspects of Fratelli Tutti that are beyond the scope of this article. Francis’s Utopian vision, however, is not one of them.

“Ultimately,” writes economist and social theorist Thomas Sowell, “Our choice is to give up Utopian quests or give up our freedom. This has been recognized for centuries by some, but many others have not yet faced that reality, even today.”

At 83, it’s probably too late for Pope Francis to face reality. For the rest of us, though, the sooner the better.