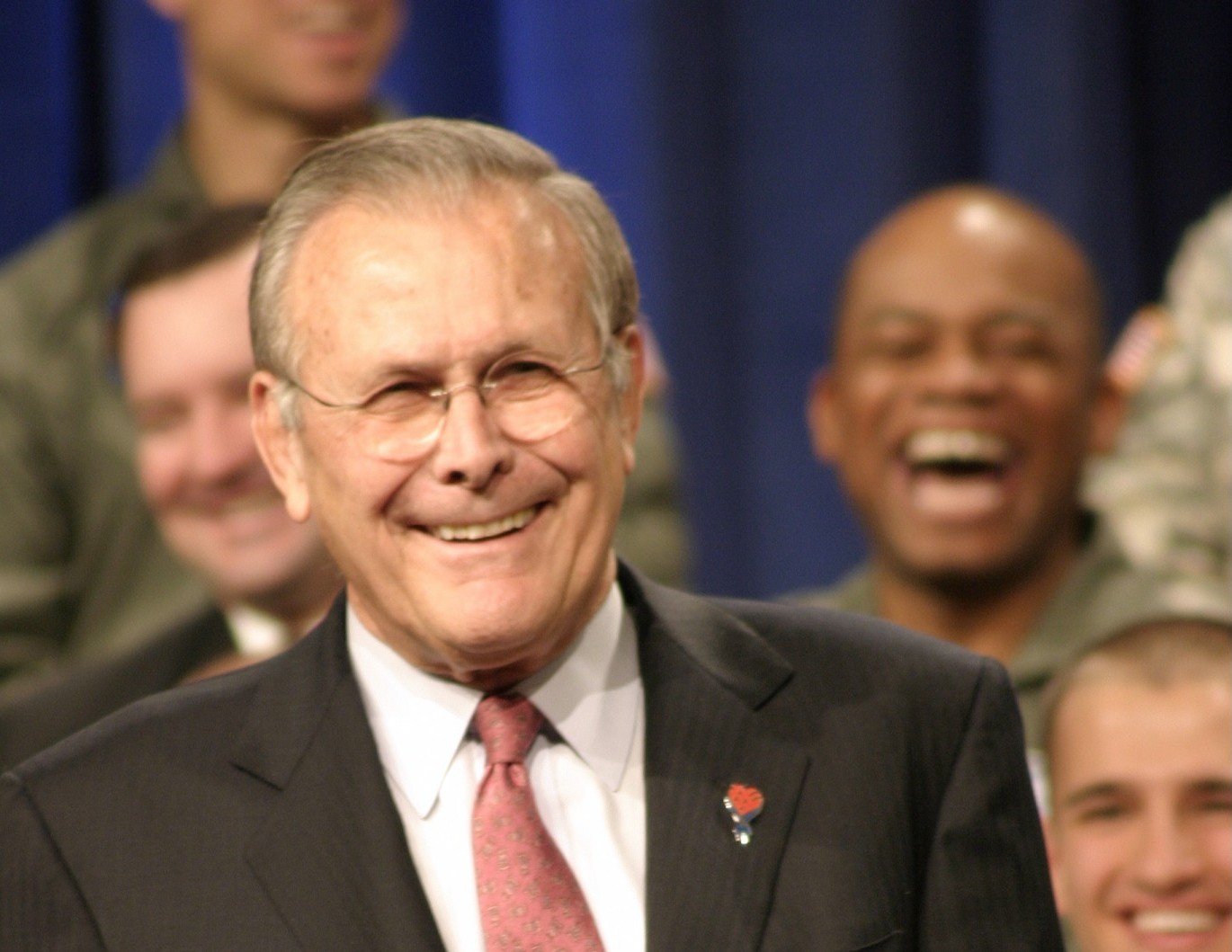 Washington — Donald Rumsfeld, the two-time secretary of defense, advisor to presidents, and three-term member of Congress, was buried at Arlington National Cemetery on August 23 after a stately ceremony in the cemetery’s large chapel. His friends and associates filled the chapel, and I wish I could report on what luminaries were present, but I cannot. Everyone was wearing a mask. The media reported that Defense Secretary Lloyd J. Austin III was there and the chairman of the Joint Chiefs of Staff, General Mark A. Milley, but I did not see them. Possibly they were seated next to me, but with everyone masked, it was impossible to identify who was who.

He never let The American Spectator down when we were under government investigation. He stood by us.

I do know that former Vice President Dick Cheney was present because he spoke and delivered a very eloquent and moving speech without wearing a mask. It was a humorous speech because Don was a humorous man, and it was a serious speech because Don was — first and foremost — a serious man. Yet, I shall remember the speech for its personal touch. Don and the vice president were particularly close for decades. The vice president claimed he owed his career to Don. Toward the end of his oration, he said, “Until we meet again, goodbye old friend,” and there his voice wavered. Dick Cheney is not given to public displays of emotion. He is no Joe Biden. Yet he came close at Arlington National Cemetery on this occasion. He proceeded saying, “I had responsibilities and experiences far beyond anything I could have ever known” thanks to Don Rumsfeld. And the former vice president concluded, “He decided he could trust me, and it changed my life.”  Yes, Donald Rumsfeld lived and worked in Washington, yet he was famous for trusting his friends. He was a man of loyalty.

He never let The American Spectator down when we were under government investigation. He stood by us. He often showed up at our public affairs. If we were considered controversial, it did not matter to Don. He stood by us.

I remember one fine night when he came to my house to dine. With me that evening was my dear friend Martin Gilbert, the authorized biographer of Winston Churchill. I thought they would hit it off and I was not disappointed. Don and Martin of course had many mutual friends. They also had many common interests. Martin knew everything about Winston and pretty much everything about world politics. If my memory has not failed me, he had just written in The American Spectator a defense of Pope Pius XII against charges that the Pope had not done enough to protect the Jews from Hitler. Possibly he had yet to write it. At any rate, World War II was one of the evening’s topics, but there was more.

Don was a fan of board games, and so was Winston. Don played a game that he had heard Winston favored. Martin assured him that the prime minster did indeed play the game and so did Martin. Both then proceeded to talk about the intricacies of an obscure game whose name I am afraid I never mastered, though I showed my guests rapt attention. All I can tell you is that the game was not checkers and certainly not chess. We proceeded to discuss the war in Iraq.

Don had recently resigned as secretary of defense and Martin had been named to a panel whose mission was to investigate whether Saddam Hussein possessed weapons of mass destruction. Martin assured us that he did and, as I recall, Don agreed. Later the Iraqi high command assured the world that they had such weapons, including chemical weapons, for instance: VX, sarin, and mustard gas. Saddam had dispersed them all over the countryside. I never doubted this, but the debate went on for years between the hawks and the doves. At some point in the evening, Don expressed his opposition to nation-building. I remember him saying, “get in and get out.” I believe Martin held to the same view. Now Don is accused of being “one of the architects” of our Afghan involvement. He certainly was not that evening with Martin and me. I have no doubt that he would be for “getting in,” but he would also be for “getting out” pronto.

Perhaps it was during that evening with Don Rumsfeld and Martin Gilbert that I came up with the formulation of Tyrrell’s Law. According to that law, we should enter ungovernable and hostile countries and “bust the place up.” Then leave. You cannot conceivably export our culture to such places. Our culture is too complicated. So why bother? Instead, send in the B-52s or better yet drones. In fact, it appears that Joe Biden may have learned Tyrrell’s Law a little late, but better late than never. Let us hope he does not forget this lesson.

R. Emmett Tyrrell, Jr.
Follow Their Stories:
View More
R. Emmett Tyrrell, Jr. is the founder and editor in chief ofThe American Spectator. He is the author of The Death of Liberalism, published by Thomas Nelson Inc. His previous books include the New York Times bestseller Boy Clinton: The Political Biography; The Impeachment of William Jefferson Clinton; The Liberal Crack-Up; The Conservative Crack-Up; Public Nuisances; The Future that Doesn’t Work: Social Democracy’s Failure in Britain; Madame Hillary: The Dark Road to the White House; The Clinton Crack-Up; and After the Hangover: The Conservatives’ Road to Recovery. He makes frequent appearances on national television and is a nationally syndicated columnist, whose articles have appeared in the Wall Street Journal, New York Times, Los Angeles Times, Baltimore Sun, Washington Times, National Review, Harper’s, Commentary, The (London) Spectator, Le Figaro (Paris), and elsewhere. He is also a contributing editor to the New York Sun.
Most Popular
1
Daily Folios and Consecutive Sentences
On Trump, Kanye, Biscuit, Jews, and Dinners
by Dov Fischer