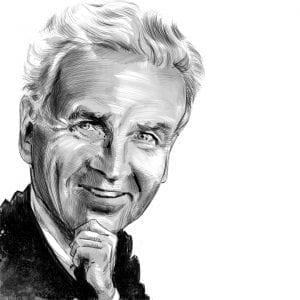 R. Emmett Tyrrell, Jr.
https://www.spectator.org
R. Emmett Tyrrell, Jr. is the founder and editor in chief ofThe American Spectator. He is the author of The Death of Liberalism, published by Thomas Nelson Inc. His previous books include the New York Times bestseller Boy Clinton: The Political Biography; The Impeachment of William Jefferson Clinton; The Liberal Crack-Up; The Conservative Crack-Up; Public Nuisances; The Future that Doesn’t Work: Social Democracy’s Failure in Britain; Madame Hillary: The Dark Road to the White House; The Clinton Crack-Up; and After the Hangover: The Conservatives’ Road to Recovery. He makes frequent appearances on national television and is a nationally syndicated columnist, whose articles have appeared in the Wall Street Journal, New York Times, Los Angeles Times, Baltimore Sun, Washington Times, National Review, Harper’s, Commentary, The (London) Spectator, Le Figaro (Paris), and elsewhere. He is also a contributing editor to the New York Sun.
Follow Their Stories: Get Notified
The Current Crisis
Clarence Thomas and Steve Scalise After the Pandemic
by R. Emmett Tyrrell, Jr. | Jun 21, 2022

Washington — Some years ago as the pandemic was making its first stirrings, I heard from assorted pundits across the…

Washington — Take a break from the news. From the stories of war in Ukraine, the slaughter of schoolchildren in…

Washington — Once again it has happened in plain daylight. A mentally sick barbarian laid his paws on military-grade instruments…

The Current Crisis
Another Big Story the Press Missed
by R. Emmett Tyrrell, Jr. | May 24, 2022

Washington — The day after Robby Mook, the head of Hillary Clinton’s 2016 campaign for the presidency, implicated her at…

Washington — April, the great poet T. S. Eliot has tried to tell us, is the cruelest month of the…

Washington — I see that President Calvin Coolidge is in the news, along with his sidekick Warren Gamaliel Harding. Warren…