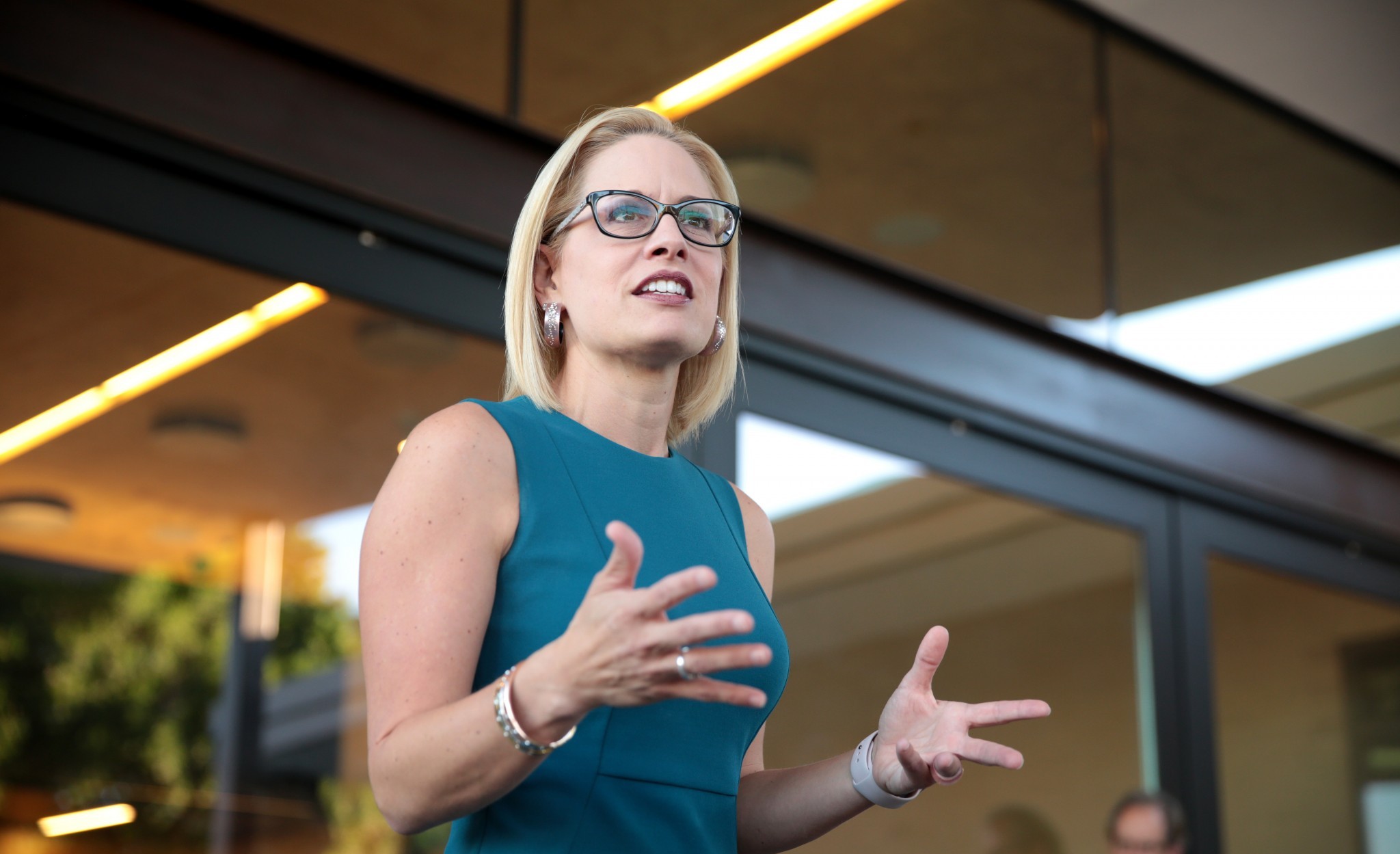 Kyrsten Sinema is by no means a conservative, but she represents a traditionally red state in which Democrats generally require special circumstances to win statewide elections.

Sinema is in the U.S. Senate because she managed a feat repeated just two years later — namely, beating the hapless Martha McSally. One could say McSally is single handedly responsible for the Democrats’ majority in the Senate, having lost not just to Sinema but to the DNC sock puppet Mark Kelly as well.

Democrats in Washington think those two elections are an indication of Arizona’s bluish tint. Sinema, who spends time among her constituents, isn’t so sure.

And so when Team D decides, amid an inflationary economy brought on by Branch Covidian lunatic public policy launched amid the panic over the China virus outbreak, to push a go-for-broke $5 trillion legislative spending-orgy agenda, Sinema turned into a stumbling block for its passage.

Because she knows she’s up for re-election in 2024, and she’s obviously not convinced she’s going to catch another Martha McSally as an opponent.

Kyrsten Sinema’s sartorial taste is a bit questionable, but she’s not stupid. That can’t necessarily be said of some of the Democrats, particularly in the House of Representatives and also in the Biden White House.

Or maybe it’s just that none of them really care about Kyrsten Sinema and her re-election prospects and are more than happy to march her off a cliff in order to pass legislation promoting change the American people are quite likely not going to be happy with but which will embed itself so thoroughly that a change in government, not just administration, could be required to make it go away.

Sinema isn’t a Hard Left loon. Not like Alexandria Ocasio-Cortez or Pramila Jayapal or some of the other buffoons who are now calling her their enemy. She’s one of the few “moderate” Democrats left. In the Senate, it’s really just her and Joe Manchin who have balked at Biden’s lunatic, economy-killing bacchanal. Barely more than their number exist in the House.

But given the Democrats’ tiny majority in both houses of Congress, those moderates are the difference between passage and failure. And Manchin and Sinema know their voters back home will have at them if they vote for the full $5 trillion insanity. Both are on board with $1.5 trillion of it, the colossally wasteful “bipartisan” infrastructure plan. The rest, a $3.5 trillion budget reconciliation package stocked up with every stupid-fantasy governmental abuse of constitutional limits and basic economic truth Bernie Sanders could think up, they’re not on board with.

Since Jayapal and the rest of the loons have taken the position that they won’t support the $1.5 trillion infrastructure package without the $3.5 trillion festival of idiocy passing first, we have found ourselves in a bit of a quandary. And with Republicans on Capitol Hill finally recognizing the value of saying no, and allowing the Democrats to hang themselves, it’s socialists-vs-moderates for the big fat “L.”

Sinema boarded a plane on Friday and went home to Phoenix rather than stick around for the hotbox sessions the Democrat leadership had planned for her. Without her on Capitol Hill, the $3.5 trillion package was off the legislative table for a quick smash-mouth session; only the $1.5 trillion could be passed. Which wasn’t good enough for Pramila Jayapal and her collection of angry clowns.

And while Republicans laughed, the Left decided to scream at the sky.

In a public bathroom.

While filming themselves doing it.

How was your weekend?

🔴BREAKING: Blanca, an AZ immigrant youth confronts @SenatorSinema inside her classroom, where she teaches @ ASU. "in 2010 both my grandparents got deported bc of SB1070…my grandfather passed away 2 wks ago & I wasn't able to go to Mexico bc there is no pathway to citizenship." pic.twitter.com/JDZYY2fOD2

And a bit more…

Part 2/2
You can hear them snickering at the end. They are so proud of themselves pic.twitter.com/lZjMqFeAjJ

This happened at Arizona State, where she teaches a class.

We’ll skip the big-picture commentary about just how lousy the Left is at persuasion anymore. You already know all of that. It’ll suffice to say that this is more likely to have the effect of hardening Sinema’s position against the $3.5 trillion than it is to persuade her.

Losers threatening to beat her in the next election when she’s clearly had her own internal polling done and knows she can only win by minimizing the amount of irritation she imposes on independents and soft Republican voters, won’t really move the needle. Nor will impassioned pleas by illegals looking for free swill from the public till.

“Yesterday, several individuals disrupted my class at Arizona State University,” Sinema said in a long, understandably-grumpy statement. “After deceptively entering a locked, secure building, these individuals filmed and publicly posted videos of my students without their permission — including footage of myself and my students using a restroom without consent.”

That happens to be a violation of Arizona law, by the way, not that anybody expects these loons to suffer for it.

“In Arizona,” Sinema continued, “We love the First Amendment. We know that it is vital to our democracy that constituents can freely petition, protest or criticize my policy positions or decisions. The activist group that engaged in yesterday’s behavior is one that both my team and I have met with several times since I was elected to the Senate and I will continue engaging with Arizonans with diverse viewpoints to help inform my work for Arizona.”

“Yesterday’s behavior was not legitimate protest. It is unacceptable for activist organizations to instruct their members to jeopardize themselves by engaging in unlawful activities such as gaining entry to closed university buildings, disrupting learning environments, and filming students in a restroom.

“In the 19 years I have been teaching at ASU, I have been committed to creating a safe and intellectually challenging environment for my students. Yesterday, that environment was breached. My students were unfairly and unlawfully victimized. This is wholly inappropriate.

“It is the duty of elected leaders to avoid fostering an environment in which honestly-held policy disagreements serve as a basis for vitriol — raising the temperature in political rhetoric and creating a permission structure for unacceptable behavior.”

That last bit, emphasis mine, is the money shot. Sinema just called out AOC, Jayapal, and the rest of the Lunatic Caucus as responsible for what happened in the restroom. And nobody can blame her, because it’s been several years of this kind of behavior on the Left thanks to the rhetoric of people like Barack Obama, Sanders (who called for a “political revolution” and then acted surprised when one of his stooge followers attempted the political assassination of several Republican members of Congress), and Maxine Waters.

Now Sinema is demanding they be held to account. Hopefully she’ll get somewhere with that, but don’t hold your breath.

Meanwhile, Manchin stays on a houseboat he owns in DC. The loons found him as well.

11/ Thank you to @Sen_JoeManchin for specifically offering an in-person meeting on Capitol Hill today or Monday for the West Virginians of @Race_Matters_WV @_youngwv @RiseUpWV and more!

They’re looking forward to it and extending stays to ensure they’ll be in DC on Monday! pic.twitter.com/jVS8n1zkpW

Assumedly these people might actually be from West Virginia, where manners haven’t been completely lost. Though harassing Manchin at home, regardless of how nicely, doesn’t scream “civility.”

You’d think official Washington would be pumping the brakes on this kind of thing, at least among their own party people. And you’d think wrong, because this is what Biden said about Sinema’s ordeal…

Joe Biden says Senator Sinema being chased into the bathroom and filmed by activists there is “part of the process.” Yikes. pic.twitter.com/ynNauQ0Jhp

Telling a senator you’re trying to convince of something “Them’s the breaks” when she gets chased into a ladies’ room while at her other job is, well…

This is Biden, so there’s no floor. Even so, that’s obviously not going to fly.

So out came Circleback Girl to spin it…

DOOCY: "Has [Biden] ever been chased into a restroom by activists?" pic.twitter.com/V911pPThHk

As an aside, do you notice how hard it is for Circleback Girl to give a straight answer without buttering up the Hard Left first?

Biden’s babbling, and that of Psaki, isn’t going to tamp anything down. It’s going to get worse. And as the Hard Left continues trying to ramp up the pressure to pass a bad legislative package the public will inevitably turn on when they realize what’s in the 2,500 pages of that $3.5 trillion poop-pile, it isn’t an altogether unreasonable bet that either Manchin or Sinema might just say To Hell With This and flip to independent.

Or even cut a deal with Mitch McConnell for a committee chairmanship in a GOP-led Senate or something (not to mention a cleared field for 2024), which McConnell would absolutely do in order to reclaim that gavel.

Of course, should that happen, it would truly be the end of any moderate Democrats on Capitol Hill.

But given the implicit and explicit threats being made by the AOC’s of the world that the moderates are going to catch primary opponents next year, many of whom might very well win in the same way AOC did but will find themselves far less likely to survive in the 2022 general election in swing districts, that end of the moderates might be coming eventually anyway.

We can predict the outcome of the Democrat Civil War. It’s going to end up exactly the same in politics as it did in other venues like academia, Hollywood, the arts, and journalism, where the Hard Left has chased ordinary liberals and moderates off and begun imposing ruin on the institution. But unlike those, in politics there are still some conservatives around to benefit from the implosion.

So let the games begin. And try to hold back the Bill Cassidys, Lisa Murkowskis, Liz Cheneys, and Mitt Romneys from spoiling the fun for everybody if you can.