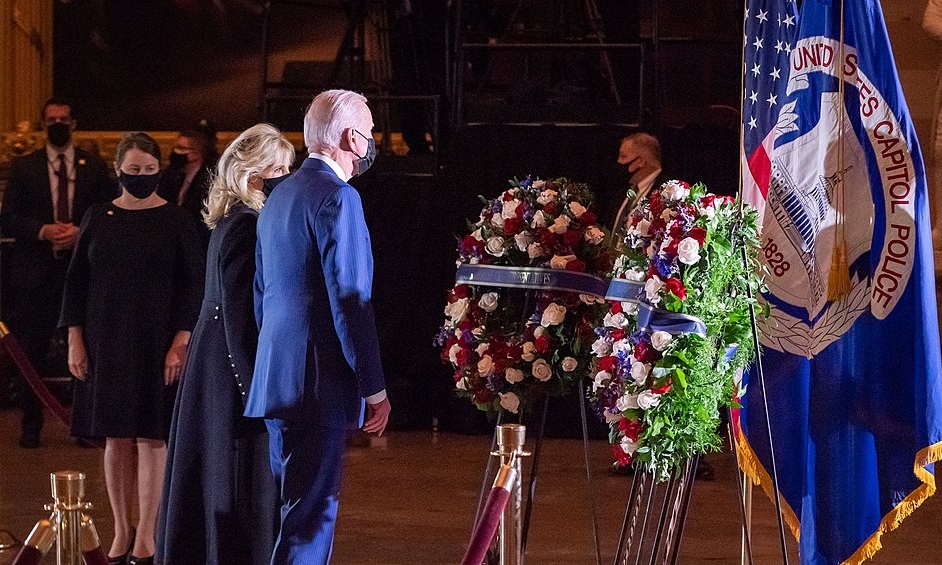 In his State of the Union address, President Joe Biden called the January 6, 2021 riot at the Capitol “the worst attack on our democracy since the Civil War.”

It would be easy to dismiss this hyperbolic comparison as just one more example of Biden’s painfully obvious dementia. But, as part of a major speech undoubtedly crafted by White House staff, it is clear that this claim was part and parcel of the Biden regime’s ongoing efforts to demonize and destroy its political opponents, including those who have questioned the legitimacy of the November 2020 presidential election.

House Speaker Nancy Pelosi has hand-picked a committee to investigate what the corporate media are breathlessly calling the “insurrection” by the Capitol Hill protesters who were allegedly attempting to seize control of the government. But, as time passes and the facts slowly emerge, it is becoming apparent that the events of January 6 were neither an insurrection nor a serious attempt to seize power. Indeed, though a number of the protesters engaged in violence, the majority appeared to have conducted themselves with all the lethal intent of undergraduate panty raiders.

So, was the January 6 riot “the worst attack on our democracy since the Civil War”? Let’s look at the historical record.

Consider, for example, the events of March 1, 1954, when members of Congress had gathered on the House floor for an upcoming vote. It was then that four armed members of the Puerto Rican Nationalist Party entered the visitor’s gallery above the chamber and quietly took their seats. All at once, they unfurled a Puerto Rican flag and started firing handguns indiscriminately at the assembled House members. Five congressmen suffered serious gunshot wounds.

Wasn’t that an attack on democracy? If so, given that five members of Congress were shot, are we to believe that the events of January 6 were more serious?

Or what about June 14, 2017, when a Bernie Sanders supporter with an avowed hatred of Republicans fired over 60 rifle rounds at the House Republican baseball team in an Alexandria, Virginia park? Five persons, including Rep. Steve Scalise, were seriously wounded before police could shoot and kill the attacker. How does that compare to the events of January 6, 2021?

Not to belabor the point, but since the Civil War, three presidents have been assassinated, the Japanese bombed Pearl Harbor, Nazi Germany declared war on the United States, and terrorists attacked on September 11, 2001. Does the Capitol riot even rate in the same category as these attacks on democracy?

To be sure, the Democrat establishment and its corporate media adjunct trumpeted for months that protesters had killed Capitol Police officer Brian Sicknick.

“Officer Sicknick was responding to the riots on January 6, 2021, at the U.S. Capitol and was injured while physically engaging with protesters,” the Capitol police said in a widely broadcast statement. “He returned to his division office and collapsed. He was taken to a local hospital where he succumbed to his injuries.” (Emphasis added.)

This announcement was accompanied by media reports that protesters had caused Sicknick’s death by hitting him in the head with a fire extinguisher. But, when no evidence supporting that claim could be found, by February 2021 the media had changed its narrative to claim that Sicknick’s death was caused by a fatal reaction to protesters assaulting him with a chemical irritant such as bear spray. Head injury or bear mace — either would do. The media narrative was that violent Trump-supporting insurrectionists had killed a police officer.

So it was that, on the evening of February 2, 2021, Officer Sicknick’s cremated remains were brought to the Capitol rotunda, where Joe and Jill Biden paid their respects.

The following morning, as Sicknick’s remains lay in state, there was a congressional tribute featuring remarks by House Speaker Nancy Pelosi and Senate Majority Leader Chuck Schumer. Temporarily putting aside their party’s calls to defund the police, Pelosi and Schumer eulogized and praised the fallen officer.

“A peacekeeper, not only in duty, but in spirit,” Schumer said of Sicknick. “Talk to his colleagues, and they will tell you that Brian was a kind and humble man, with profound inner strength, the quiet rock of his unit.”

Pelosi promised that lawmakers would remember the sacrifices of Sicknick and the other officers who fought to protect the Congress.

The Democrat and media narrative had been dramatically and forcefully rammed home. The insurrectionists, in their lust to defeat the will of the people by violently overturning the election, had murdered this exemplary police officer.

But then the facts began to emerge.

Immediately after Sicknick’s January 7, 2021 death, his body was autopsied by the District of Columbia’s Office of Chief Medical Examiner (OCME). This agency is under the authority of Washington Mayor Muriel Bowser who, it must be noted, joined the mourners at the congressional tribute to Officer Sicknick.

Despite the intense public interest, the OCME strangely declined to release the autopsy results.

On February 16, 2021, Judicial Watch filed a Freedom of Information Act request seeking the following from the OCME:

All records, including but not limited to autopsy reports, toxicology reports, notes, photographs, and OCME officials’ electronic communications, related to the death on January 6, 2021 of Capitol Police Officer Brian Sicknick and its related investigation.

Nevertheless, without explanation, the OCME denied the request and declined to disclose the autopsy results.

On March 19, 2021, Judicial Watch filed suit demanding the production of the requested records.

Faced with this lawsuit, on April 19, 2021, the OCME finally released a report summary referencing “acute brainstem and cerebellar infarcts due to acute basilar artery thrombosis.” Translation: Sicknick had suffered two strokes at the base of his brain stem caused by a clot in his artery.

In an interview with the Washington Post, the chief medical examiner said the autopsy found no evidence of external or internal injuries and no evidence that Sicknick had suffered an allergic reaction to chemical irritants.

In short, well before Sicknick’s urn was put on display in the Capitol rotunda, the OCME, which reports to Democrat Mayor Bowser, had already determined that he had not died at the hands of protesters. Instead, he had died of natural causes.

All of which raises these questions:

Are we to believe that the OCME kept these explosive autopsy findings from Mayor Bowser?

What did Chuck Schumer, Nancy Pelosi, and the others who staged the congressional tribute know about the true cause of Sicknick’s death, and when did they know it?

Are we to believe that, as they eulogized Sicknick in the rotunda, they were unaware that he had died of natural causes?

By staging the congressional tribute, the Democrat leadership dramatically and quite effectively used Sicknick’s death to brand the protesters as homicidal thugs. But now, in light of the autopsy findings, it is more than fair to demand answers to these inconvenient questions:

As they stood before Sicknick’s urn and mourned his passing, were the Democrat leaders concealing the truth about his death?

If so, what was their purpose?

George Parry
Follow Their Stories:
View More
George Parry is a former federal and state prosecutor who practices law in Philadelphia and blogs at knowledgeisgood.net.
Most Popular
1
Political Hay
McConnell Gets Burned After Trying to Compromise With Democrats on Electoral Count Act
by Ali Alexander