by Dov Fischer
Pro-Trump protesters occupy the balcony of the Capitol building on January 6, 2021. (Shutterstock/Lev Radin) 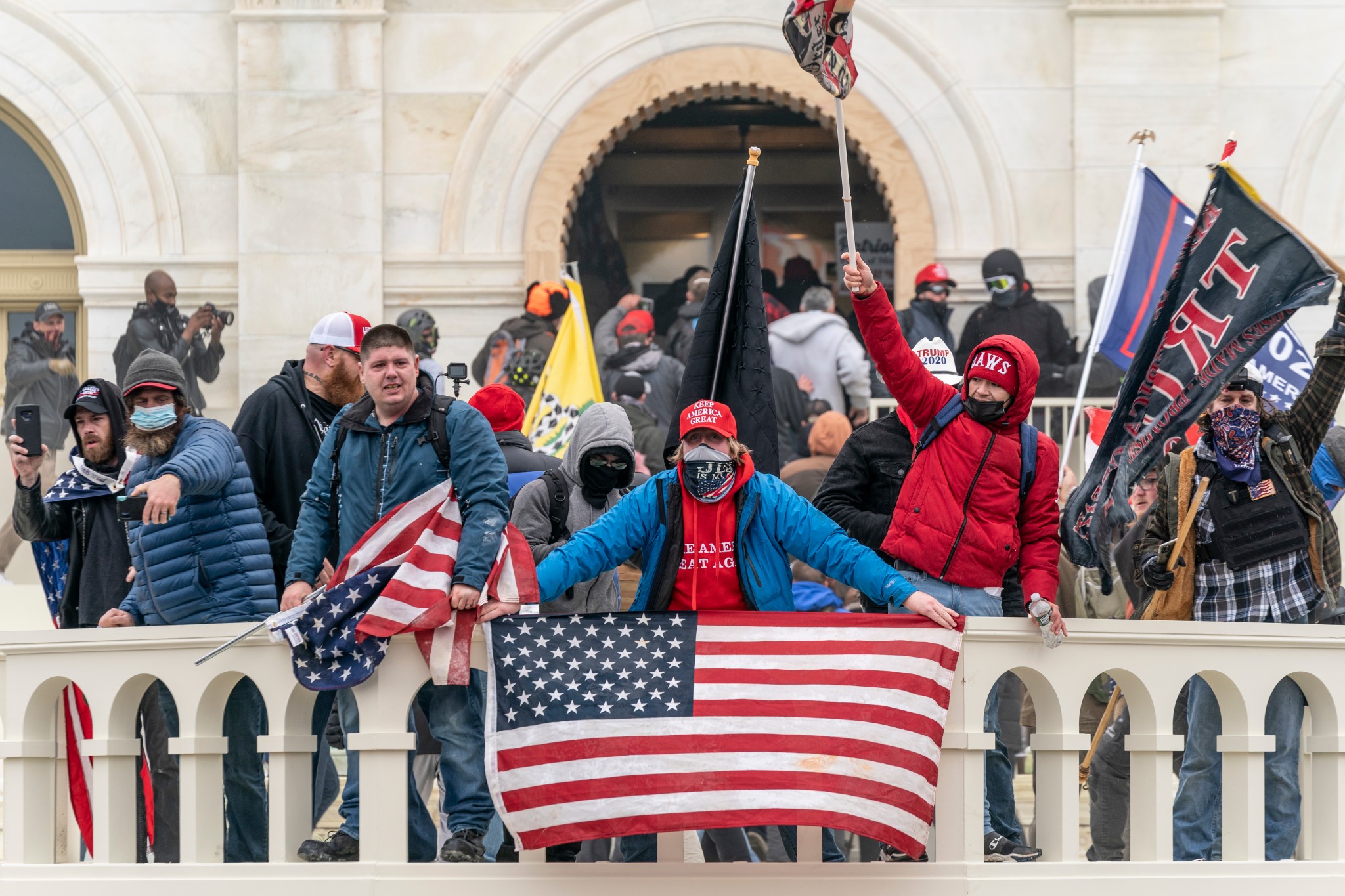 Please don’t share this article with anyone except for your neighbors, friends, enemies, relatives, and coworkers — I don’t want to get into trouble — but I remain adamant that January 6 was not an insurrection. To say otherwise is a despicable lie.

Insurrection was not on the mind of anyone serious at the Capitol on January 6. It was a very large demonstration aimed at protesting the way an election was conducted. No matter what anyone thinks of the November 2020 election, there was something wrong with states changing their election laws months, even weeks before balloting. In addition, social media monopolies suppressed the news of the Hunter Biden laptop, which would have been a game changer.

In the face of all that stuff, many thousands came to Washington, D.C. to protest. They did not come to seize the reins of power. There were no U.S. military generals or captains or colonels or lieutenants leading or strategizing a coup. There was no shooting of rifles or taking of hostages. Rather, people came dressed like it was a carnival, such as the men dressed in bear or wolverine outfits.

Anyone who ever has read or learned anything about military coups or Bolshevik-style revolutions knows that January 6 was a demonstration that got out of hand, as did scores of racist, anti-Semitic “Death to the Police” Black Lives Matter demonstrations all summer.

The D.C. Capitol Police proved to be incompetent — something we knew already — and failed to set up sufficient barriers. Consequently, a bunch of angry people in the front lines charged the police barricades and got through, and the throng mindlessly followed them. That is what throngs do. They do it at movies, at restaurants, at soccer games, and at heavy metal concerts.

They burst into the Capitol because that’s where the throng flowed. For 99 percent of those inside, it was pure curiosity. It was like the people who almost tore down the White House when celebrants thronged to fete the newly elected Andrew Jackson.

Remember the guy sitting on Nancy Pelosi’s chair? Do you think he came like John Brown in Harpers Ferry, West Virginia, to seize military weapons and incite a national insurrection? Of course not. Be real. The guy was having the time of his life. Or the characters in the crazy outfits?

Thirty-five years ago, I was national executive vice president of the Likud Zionists of America. We supported the ideas of Ze’ev Jabotinsky, Menachem Begin, Yitzhak Shamir, and Benjamin Netanyahu — and lobbied to gain support in Congress for Israel’s rights to Judea and Samaria (the misnomered “West Bank”). We were headquartered in Manhattan, and one day I hosted a Michigan congressman who came to the east coast to be the guest of honor at our monthly program. I spent the day with him and his fiancee, showing them around Manhattan. We got more than we bargained for because it was during the years before Rudy Giuliani. So when we visited Times Square, a hooker propositioned the congressman while I was talking with his bride-to-be half a block away. We went to Columbia University, Central Park, Lincoln Center, the Metropolitan Museum of Art, the Frick House (my favorite museum), the J.P. Morgan House, Macy’s at Herald Square, and to the top of both the Empire State Building and the World Trade Center. Since it was Manhattan, we even got stopped in Greenwich Village’s Washington Square Park by a drug pusher offering to sell us weed. We also got to see from our car a guy shoot a pistol at someone in Midtown. For this rural Michigan legislator, it was an eye-opener and also lots of fun. For part of the day, I took the guy to Turtle Bay to see the United Nations. We got in, and we broke off from the tour. The next thing we knew, we were in either the General Assembly or Security Council room. (I don’t recall which.) The room was empty. The congressman asked me whether, if we closed the door and turned on the lights, I kindly would take some photos of him with the 35-millimeter camera we brought while he would stand at the rostrum and pose as though speaking to the General Assembly. He told me he would use the photo in his next mailer in his rural congressional district to convey to voters that he had been invited to speak to world leaders at the U.N. What did I care? I took the photos. That night we had dinner at Schmulka Bernstein’s, the best kosher Chinese restaurant ever.

Was that congressman undertaking a world insurrection and trying to seize the United Nations? Of course not. He was having the time of his life. The door to the room had been left open, and his fiancee was with him, and it was fun. In the same way, the character who ended up in Pelosi’s office with his shoes on her desk was having fun. He had followed the throng, and he ended up where he did. He had not come to seize the government.

Anyone sensible, regardless of personal politics, knows that if January 6 honestly had been contemplated as an insurrection, lots of bullets would have been fired. But where was the insurrection? Where was the coup? Instead, someone killed Ashli Babbitt — Say Her Name — a United States Air Force 14-year veteran. Real Clear Politics seems to have identified her killer.

This is why the trespassers now on trial for January 6 law-breaking are getting sentences like eight months or just probation. By contrast, John Brown’s sons, Watson and Oliver, were killed on site, while he was sentenced to death only two weeks later and was hanged only a month after that. So the people who came to rally on January 6 and to hear the President of the United States did not come to overthrow the elected government. Rather, they came to demonstrate their disgust with a broken system, and the thing got no less out of hand than did a summer of left-wing Antifa and Black Lives Matter riots.

Certainly, perhaps four or five people came to overthrow the government. They just forgot to tell anyone else. What kind of insurrection is that? Would the Bolsheviks have taken Russia or Mao China if simply Lenin, Stalin, and Trotsky had shown up one day with a manifesto and a few thousand people chanting slogans? Would Mao have gotten China that way?

Pelosi has fixated on a political strategy of doing an annual Passion Play about “rescuing democracy” from “fascism” (i.e., from those who do not vote Democrat). One year it was a Trump impeachment. The next year another Trump impeachment. This year: no Trump, so a January 6 Insurrection Investigation.

In truth, this canard of “insurrection” does grave damage to the country. Democracy is not in danger from Republican conservatives nor populists. We just want to be left alone, to enjoy this greatest of all countries, to keep the lies of “systemic racism” and “critical race theory” out of our kids’ and grandkids’ schools, to keep the police maximally funded and reinforced, to control inflation as in the Trump days, and to be spared from having to pay reparations to people whom we did not harm. Instead, by fostering the Big Lie of “January 6 Insurrection,” Pelosi inserts the idea of insurrection into the American psyche and arena. She takes the unspoken — the Verboten, the Taboo — and she gets Americans of different stripes thinking: “Hmmm. An insurrection? Hmmm.”

This is terrible. We must get rid of her in November 2022. The old-fashioned American way: at the ballot box.

Dov Fischer
Follow Their Stories:
View More
Rabbi Dov Fischer, Esq., a high-stakes litigation attorney of more than twenty-five years and an adjunct professor of law of more than fifteen years, is rabbi of Young Israel of Orange County, California. His legal career has included serving as Chief Articles Editor of UCLA Law Review, clerking for the Hon. Danny J. Boggs in the United States Court of Appeals for the Sixth Circuit, and then litigating at three of America’s most prominent law firms: JonesDay, Akin Gump, and Baker & Hostetler. In his rabbinical career, Rabbi Fischer has served several terms on the Executive Committee of the Rabbinical Council of America, is Senior Rabbinic Fellow at the Coalition for Jewish Values, has been Vice President of Zionist Organization of America, and has served on regional boards of the American Jewish Committee, B’nai Brith Hillel, and several others. His writings on contemporary political issues have appeared over the years in the Wall Street Journal, the Los Angeles Times, the Jerusalem Post, National Review, American Greatness, The Weekly Standard, and in Jewish media in American and in Israel. A winner of an American Jurisprudence Award in Professional Legal Ethics, Rabbi Fischer also is the author of two books, including General Sharon’s War Against Time Magazine, which covered the Israeli General’s 1980s landmark libel suit.
Most Popular
1
Political Hay
McConnell Gets Burned After Trying to Compromise With Democrats on Electoral Count Act
by Ali Alexander