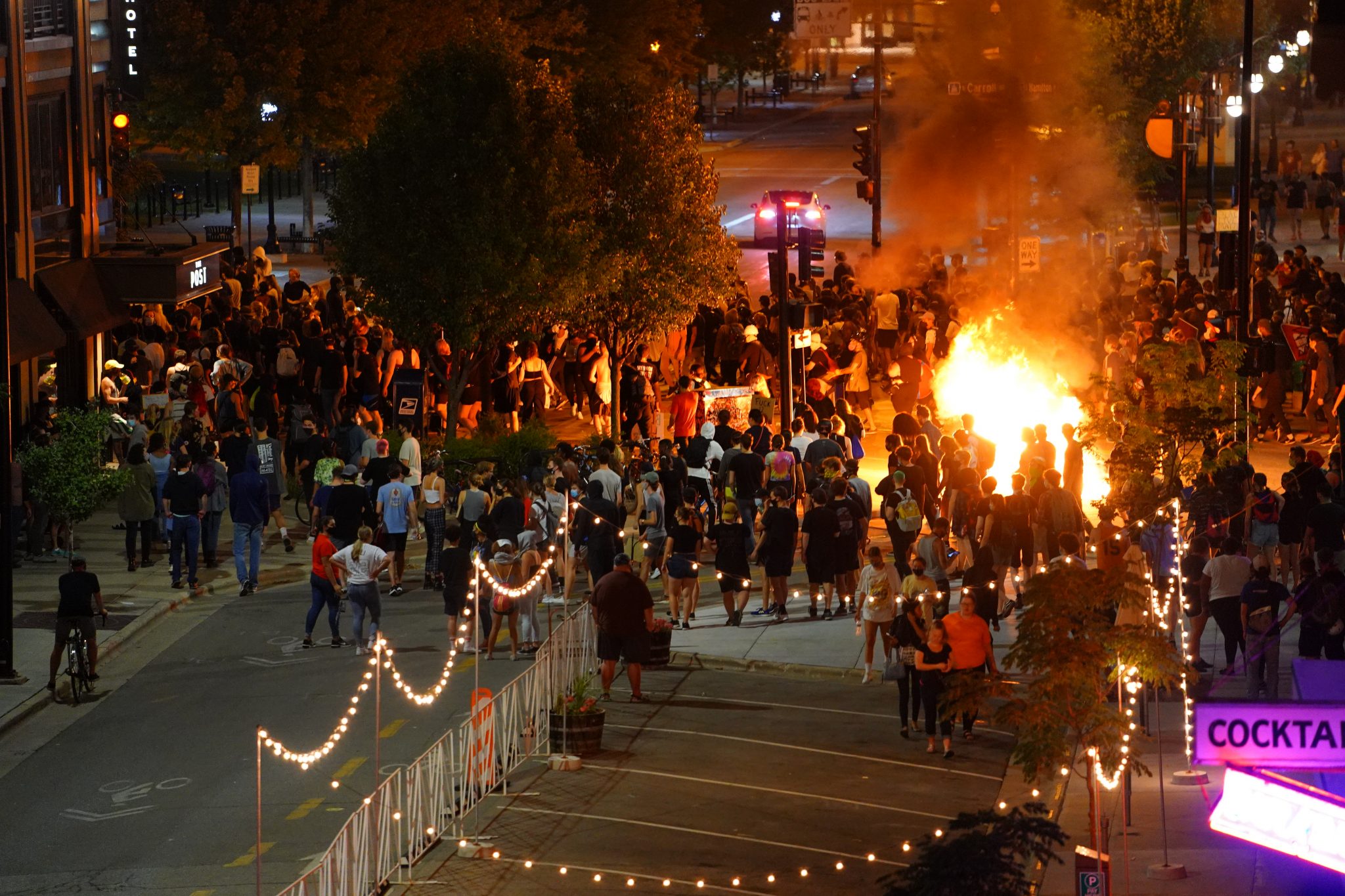 Voters, let Philadelphia, the city of brotherly love, be a warning to you: Vote Biden, or else.

Philadelphia burns. Stores recently restocked from previous looting are being looted again and will have nothing to sell for Christmas. The cops stand by, overwhelmed. The national media ignores the chaos their careless reporting causes. No images of the destruction grace their pages or screens.

Americans see the truth via social media. Friends and family affected by the destruction tell them. The news leaks out despite the media.

Whatever the reasons, even COVID-worried Americans are beginning to vote for President Trump. That’s a sign of courage considering the likely outcome.

Fires in Seattle, Portland, L.A., St. Louis, Philadelphia, Detroit, Baltimore, Atlanta, Dallas, D.C., Minneapolis, Chicago, and Kenosha, Wisconsin, serve as warnings. When leftists don’t get their way, they destroy. It happened after the election in 2016. D.C. businesses had windows shattered. Trump supporters going to inauguration balls were spit on, had water thrown on their clothes, and were intimidated.

The message is clear: Vote for Trump and America will pay.

Brave citizens display Trump signs anyway. They vote for Trump anyway. Well, many do. There are too many Biden voters. Biden voters may falsely believe that the bullies, tyrants, and Antifa potentates will recede if Biden wins. They’re wrong.

Should Biden win, intimidation will increase. Speech code enforcement commences. Employees risk career advancement by expressing wrong-think. Governors like Andrew Cuomo will invade the homes of more Jewish people. The totalitarians will be emboldened. Freedom to speak, to assemble, to worship and freedom to defend oneself will be infringed upon — constantly. America as a sophomore college dorm room.

Should Trump win, the violence will amplify and be a continuation of the interminable public tantrum. The Clinton spoil-sports who felt entitled to the reins of power and still can’t believe that they don’t hold them will do more than shriek. Their outrage at being denied again will explode.

Still, Americans vote for Donald Trump. They know what it could mean. For the last few months, it hasn’t been clear that Americans would be willing to do this.

Watching Americans submit to governors’ arbitrary edicts has been alarming. Americans aren’t usually consumed by fear and willing to destroy their own livelihoods for some phantom menace. But Americans did just that in March 2020 when stopping the spread turned into permanent isolation. Half of America believe that the draconian rules imposed in the face of a new, unknown enemy was wise. They still believe it. Most of these people do so from the comfort of their Social Security or their welfare, their government job, or their unaffected white-collar home office. Meanwhile, the middle class, small businessmen, and service workers are either jobless or seeing tax dollars going to prop up huge businesses and swaths of the American public.

Some of these folks are waking up. Maybe it’s that the governors aren’t following the science that people of college age and younger are unlikely to suffer harm from COVID and could be in school. Maybe it’s that their own businesses are being destroyed. Maybe they’ve run out of their savings. Maybe they’ve done everything right and gotten sick anyway. Maybe a spouse has to stay home to teach the kids, and that’s affecting family finances. Maybe it’s the nonstop violence in Democrat cities. Whatever the reasons, even COVID-worried Americans are beginning to vote for President Trump.

That’s a sign of courage considering the likely outcome. Voters know that trouble is brewing. This from Philadelphia:

The war is already here. Some just haven’t acknowledged it. https://t.co/9v3ycxDoMA

America’s COVID-19 numbers aren’t under control. In many places they’re getting worse. Large portions of the west coast are on fire, social media is fueling genocides, and political violence in the U.S. is increasing. People are marching in the streets, aligned with two ideologically distinct factions. Many of them (overwhelmingly from one side) are armed, and violence and death has resulted when these two sides have clashed. [Emphasis added. This is a lie and it’s the premise of the article. Five people were shot during the rioting and looting in Philadelphia last night — by each other — all of them BLM protesters.]

Further in the article, there’s more gaslighting and some actual illumination:

“Collapse,” he said, “is not evenly distributed…I’d say there’s a real danger that [America] is going to see sustained political violence.”

But Isaacson noted there are important differences between Colombia and the United States. In Colombia, the conflict happened mostly in the country and the different sides took and held territory. “In America, it will be more urban. It’s not going to be about controlling territory,” he said. “A lot of it will be, like terrorism, an effort to display a show of force and make a statement. It’ll be more performative than what you’d see in Colombia where the guerillas really did intend to take over the country.”

If all this sounds like a threat, it’s because it is. Americans are seeing the rumblings, the beginnings, of sustained violence. The Democrat governors, mayors, attorney generals and district attorneys are allowing this violence to grow, or maybe they don’t know how to stop it. Either way, Americans are getting the message that they must submit, or else.

So, more Americans vote Republican than the polls measure knowing that trouble comes for them either way, knowing that they’re targets. If America is still land of the free and home of the brave, the people will vote Trump. It’s a close thing. Too close.