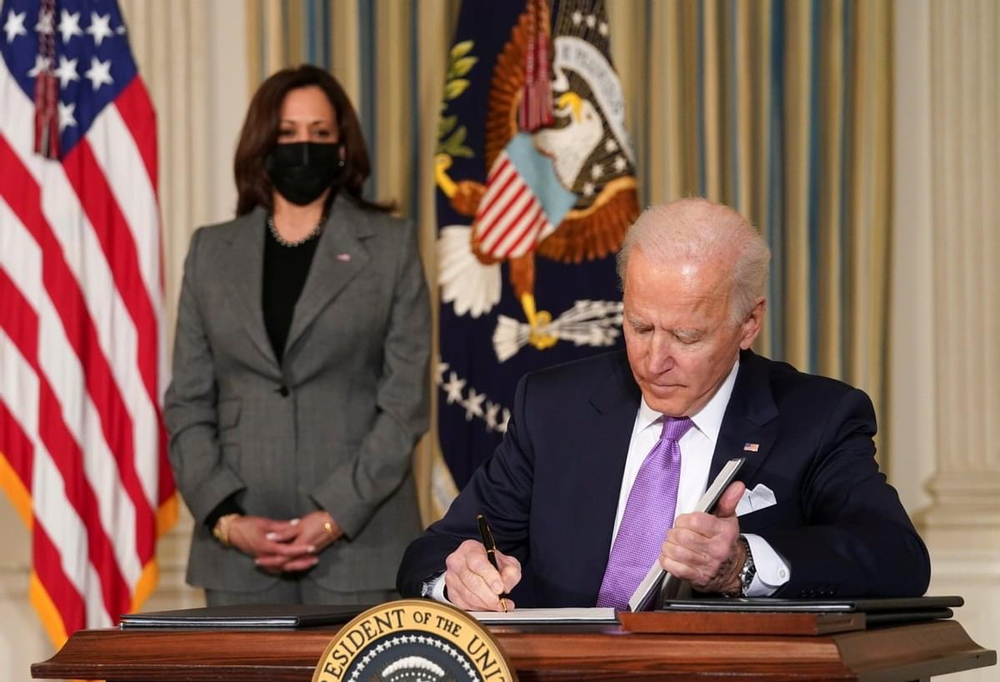 In his novel 1984, George Orwell described in horrifying detail what happens when freedom of speech is taken away by tyrannical forces: “Every record has been destroyed or falsified, every book rewritten, every picture has been repainted … [T]he process is continuing day by day and minute by minute…. Nothing exists except an endless present in which the Party is always right.”

Seventy-two years after Orwell’s novel hit the printing press, virtually everything that Orwell warned us about is now coming to fruition.

This week, the New York Times published an article detailing how the Biden administration has prioritized changing the language and visuals on all executive branch websites and has banned certain words from being used in federal agency memoranda.

“ ‘Climate Change’ Is Back,” the Times joyfully proclaimed in the headline. Naturally, the Times described these language changes as merely “a concerted effort by the Biden administration to rebrand the government.”

In reality, this “rebranding” effort aims not only to remove any trace of the Trump administration but also to promote radical policies while subtly replacing commonly understood vernacular with terms deemed permissible by the goddess of wokeism Robin DiAngelo and other radical left-wing activists.

This “rebranding” is the most egregious move yet to turn the entire executive branch of the federal government into an ecosystem that resembles a social justice studies college course. It is a brazen push to normalize irrational methods of communication and shove leftist speak down our throats.

Here are a few examples:

At the Department of Homeland Security, the term “illegal alien” has been replaced with the word “noncitizen.” Suddenly that word can now be used to describe a person who resides in Monte Carlo or an individual from Honduras who decides to unlawfully enter our country. There is no clear distinction between the two “noncitizens,” which is exactly what the tyrannical Left wants. Orwell could not have drawn it up any better.

At the Department of Justice, a memo was recently sent out stating that “the word ‘undocumented’ is not based in U.S. code, and should not be used to describe someone’s illegal presence in the country.” It should be noted that Biden has already signed an immigration reform proposal that would remove the word “alien” from the 1965 Immigration and Nationality Act. This should clear up any confusion as to whether or not Biden still considers illegal border crossings to be a prosecutable offense under 8 U.S. Code 1325.

At the State Department, an ethos statement created by Trump’s Secretary of State Mike Pompeo was removed. It remains unclear who was being harmed or what was offensive about reminding diplomats that they should be “champion[s] of American diplomacy.” Considering that Biden wishes to normalize relations with the leading state sponsors of terrorism in Iran, perhaps he realizes that the ethos statement is no longer relevant.

Another “rebranding” effort by the Biden administration involves allowing individuals who wish to leave a message on the White House site to identify themselves using their preferred pronouns: she/her, he/him, or they/them. Considering how many radical Executive Orders Biden has signed, it is unlikely he has much time to sort through the mail, but in the rare instances when he does, at least he will know how to address his pen pals.

Finally, Trump’s 1776 Commission, which was designed to provide a fair and accurate depiction of our country’s founding, was removed from the White House website soon after Biden’s inauguration. The Times egregiously misrepresented the project as something “which likened progressivism to fascism and attacked liberals who charge that the United States’ founding was tainted by slavery.” Truth-telling has never seemed much of a priority for the Times, and suggesting that the 1776 project did not condemn slavery is yet another example of journalistic malpractice from the “paper of record.”

All of this points to a much broader issue. The Left already controls the federal government, the media, Big Tech, Hollywood, corporations, professional sports, and our education system. But it’s not enough. They want complete and total control over our language, our rituals, and our sources of information. Failing to accept the Left’s narrative on virtually any subject warrants being reprogrammed.

The Left wants to force conservatives to accept their distortions and alternate realities about everything from the supposed threat of “climate change” to the myth of an epidemic of police shootings against unarmed black men to ignoring and censoring any accomplishments during Trump’s presidency, including his administration’s successful development of COVID vaccines.

When sitting Democrat members of Congress and activist journalists demand conservative networks be taken off the airwaves and call for conservative apps to be de-platformed, they are not trying root out “misinformation” or “disinformation.” No, instead they want to monopolize their own set of “facts.”

For months, the Left wanted us to believe that protesting “police brutality” and “systemic racism” in the form of rioting, looting, setting fires to courthouses and churches, destroying businesses, and causing billions of dollars in property damage was not only peaceful, and unifying, but an exercise of the First Amendment in its finest form. Those who disagreed were deemed racist and unempathetic.

For months, Democrat leaders and leftist news pundits insisted that anti-lockdown protesting was selfish, dangerous, idiotic, and unpatriotic. No one bothered explaining what was selfish about restaurant owners wanting to safely reopen their businesses to prevent them from permanently closing or what was dangerous about sending a child back to school for in-person learning, or what was unpatriotic about wanting to pray at a church on Sunday. Instead, anyone who disobeyed was called a “science denier” and “anti-American.”

And when nearly half the country wondered about the security risks of allowing millions of people to vote for the president of the United States by dropping ballots into an unsupervised drop box as though they were returning a library book, they were silenced and deemed wacko conspiracy theorists.

When our leaders and unelected bureaucrats begin telling us what words we can and cannot use in everyday conversations, or dictating what set of facts we’re allowed to believe in, they are not trying to promote “unity.” They are trying to limit our freedom.

Orwell warned us this would happen, but now he won’t have to describe the threat for us. We’re already living it.