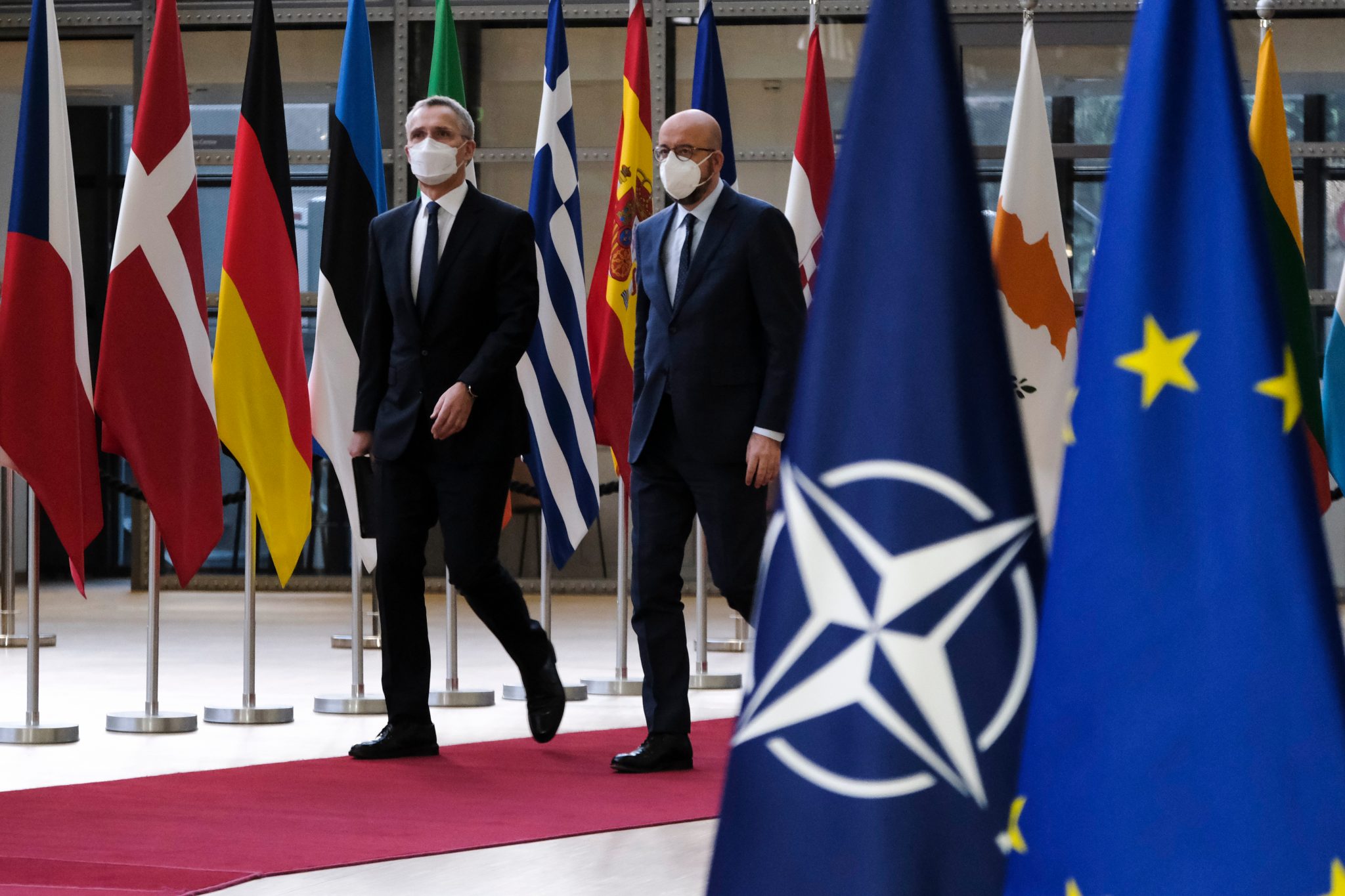 President Joe Biden has finished making the rounds of Europe, with the objective of convincing the Europeans that we still love them. Like many a jilted beau, they took “the Trump experience” hard. The former president almost brought them to tears when he called out their cheap-riding in unusually harsh terms. He also suggested that America could get along just fine without them — heresy in capitals across that continent.

The basic problem with Europe is twofold. The first is that every European member of NATO trails America in defense effort — and always has. During the early years that made some sense, since Europe’s war-ravaged states needed to concentrate on recovery and reconstruction. They were able to shelter behind the American defense shield.

But that was not supposed to be a permanent state of affairs. Dwight Eisenhower, the first NATO supreme commander and later U.S. president, warned against a permanent U.S. troop presence on the continent. He observed, “We cannot be a modern Rome guarding the far frontiers with our legions if for no other reason than that these are not, politically, our frontiers. What we must do is to assist these people [to] regain their confidence and get on their own military feet.” Foreign policy scholar Mark Sheetz explained, “The purpose of America’s ‘temporary’ intervention in Western Europe was to eliminate the need for ‘permanent’ intervention.”

For decades Washington has pressured Europe to do more. Previous presidents were more polite than Trump but equally insistent that other members of NATO should at least fake interest in their own defense. But the continent remains a military pygmy. After Russia’s 2014 annexation of Crimea and intervention in Ukraine’s Donbass region, European states, with a larger population than and equivalent economy to America, finally started spending more on their militaries. Yet last year German Defense Minister Annegret Kramp-Karrenbauer admitted, “According to estimates by the renowned London-based RUSI institute, the United States currently provides 75 percent of all NATO capabilities.”

Only a third of the other 29 members currently hit NATO’s 2 percent of GDP standard for defense. Even that number overstates the alliance’s effort. Missing in action are three of the largest European states: Germany, Italy, and Spain. Only two on the list have serious militaries: France and the United Kingdom, which maintain military traditions, pretensions of great power status, and vestigial colonial empires.

Greece is arming against Turkey, which also seems unlikely to direct its military against Russia, with which it has formed a partnership of convenience. The remainder on the 2-percent list are all in Central or Eastern Europe and, other than Poland, are relatively small: Romania, Norway, Slovakia, Poland, and the three Baltic states. Moreover, if Moscow truly poses a serious threat, even two cents on the dollar isn’t much for defense.

Germany’s Bundeswehr has been a particular embarrassment. Indeed, a British officer once waggishly termed it “an aggressive camping organisation.” Berlin attempted to keep its soldiers out of combat in Afghanistan with carefully crafted “caveats.” The troops became a joke to British tabloids, which highlighted the sausage-eating, beer-drinking German soldiers. Britain’s Daily Mail explained, “They drink too much and they’re too fat to fight, that’s the damning conclusion of German parliamentary reports into the country’s 3,500 troops stationed in Afghanistan.”

Berlin insists that its armed forces are much improved since that report in 2008, but Kramp-Karrenbauer was open about the Bundeswehr’s deficiencies, which were regularly and embarrassingly detailed by the previous Bundestag Military Commissioner, Hans-Peter Bartels. He issued one report that warned, “There is neither enough personnel nor materiel, and often one confronts shortage upon shortage.” Claudia Major, with the German Institute for International and Security Affairs, recently cited “low readiness of the armed forces. We have decades of underinvestment, poor management, lack of political attention, and this all has affected the Bundeswehr German armed forces, and the availability of forces for both collective defense and operations.”

These forces are defending Europe from the Russian hordes?

So what did the latest NATO summit do? Launch an emergency coordinated campaign to get laggards to spend more, invest wisely, upgrade forces, improve readiness, and take responsibility for their security? Uh, no.

One of the Biden administration’s major initiatives was convincing the Europeans to make China a military priority. The Washington Post reported, “Monday’s discussion was a sharp expansion of NATO’s efforts to confront Beijing after years when China was outside the focus of the defensive alliance. The allies agreed in their closing communique that ‘China’s stated ambitions and assertive behavior present systemic challenges to the rules-based international order.’ ”

Although the People’s Republic of China was mentioned, the references were far fewer and less negative than those of Russia. Moreover, the Post noted,

Not every NATO country, however, is completely on board with confronting China more forcefully. Some, such as Hungary, have friendly relations with China and seek investments from Beijing. Others such as Germany and other big European powers fall in the middle, believing there is a balance between the need to work with Beijing to fight climate change and the need to rein in its global ambitions. Others worry that too much focus on China could distract from the alliance’s traditional central mission of defending against Russia.

Not that the Europeans seem very interested in fulfilling the latter. Last year the Pew Research Center surveyed 14 NATO members. In only four did majorities favor supporting their allies. Barely a third of Germans did so. In 2019, the European Council on Foreign Relations concluded, “In conflicts between the US and either China or Russia, they [European voters] have a clear preference for the EU to remain neutral, pursuing a middle way between competing great powers. In all but one member state, most people favor such neutrality in both scenarios.” Just 12 percent of Germans would back America in a conflict with Russia.

In short, the vision of European nations and governments unwilling to arm against Russia or fight seriously in Afghanistan sending combat-ready forces to battle the People’s Republic of China must arise from a bad LSD trip or other drug-induced haze. The possibility has no connection to European reality.

Unfortunately, holding out the possibility of action against Beijing is likely to undermine NATO’s focus on Europe. First, talk of China will further divide the Europeans, who even after Biden’s election moved ahead on an EU–China investment treaty pushed by Berlin. The pact stalled in the European Parliament only after the PRC penalized members of that body in retaliation for EU sanctions on human rights. Second, the discussion of China will divert alliance attention away from more immediate and proximate threats to Europe. Third, even purely superficial measures regarding Beijing will be used to excuse inaction on making European militaries into more effective combat forces.

In Brussels, NATO’s members declared, “We face multifaceted threats, systemic competition from assertive and authoritarian powers, as well as growing security challenges to our countries and our citizens from all strategic directions. Russia’s aggressive actions constitute a threat to Euro-Atlantic security; terrorism in all its forms and manifestations remains a persistent threat to us all. State and non-state actors challenge the rules-based international order and seek to undermine democracy across the globe. Instability beyond our borders is also contributing to irregular migration and human trafficking.” The Europeans have plenty to do without faking readiness to confront China.

Ultimately, cooperation among Western and other democratic states will be important in dealing with the increasing challenge posed by Beijing. But the president and others in Washington shouldn’t fool themselves into expecting military assistance from Europe. They certainly shouldn’t allow this alluring chimera to divert them from the more pressing issue of shifting the primary burden of managing Russia from America to Europe.