by Paul Kengor
Tribute to Fidel Castro at Moscow’s Cuban embassy on his death in Nov. 2016 (Hurricanehank/Shutterstock.com) 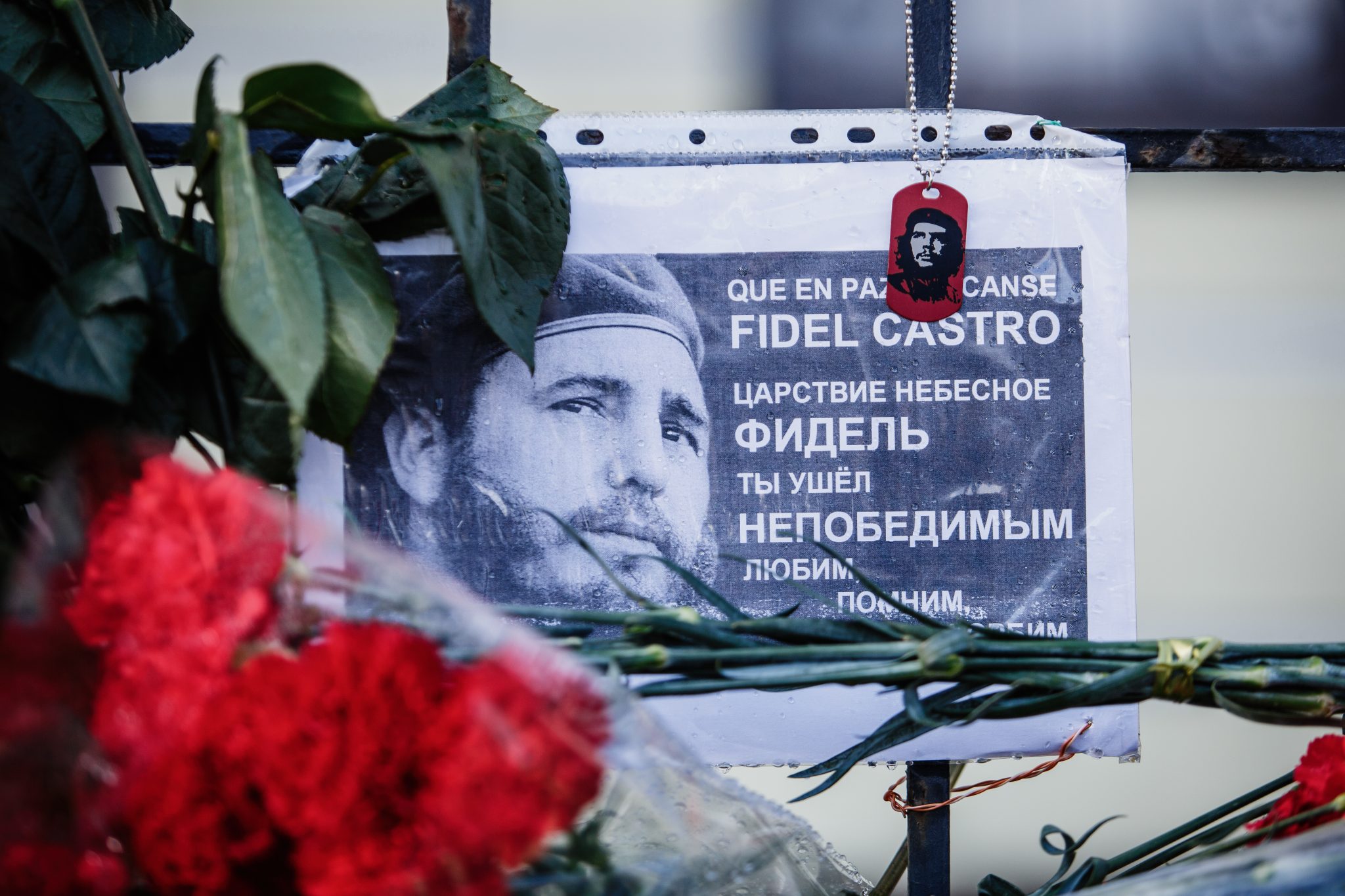 Castro, for the record, was much more than a millionaire. In 2006, Forbes magazine estimated his net worth at $900 million and rising. The communist tinhorn despot ranked among the top 10 wealthiest rulers in Forbes’ annual survey, with a stash of cash and land equating to likely over a billion dollars at the time of his death.

And yet, all Cuban workers — from doctors to teachers, baseball players, dentists, farmers, janitors — subsisted at a mandated “living wage” of $1,200 per year, while the Castro brothers and a close-knit band of apparatchiks literally owned the island. Like all communist countries that tout spreading the wealth, Cuba has its filthy rich; they’re the “1 percent” of Communist Party cohorts.

Yes, American progressives and Occupy Wall Street maniacs, if you want to see a society of true 1-percenters, with an income gap that would make you cry into your Starbucks cup, go to a Marxist country. There, 99 percent of the masses make the same poverty wage, while 1 percent confiscate wealth and property.

But hey, at least the serfs have “free” education and health care!

That’s the ridiculous retort of the American Left, including Bernie Sanders.

A big fan of Castro’s revolucion is America’s top revolutionary, Bernie Sanders, who in August 1985 gushed and blubbered, “In 1961, we invaded Cuba, and everybody was totally convinced that Castro was the worst guy in the world.”

Well, not everyone. Not Bernie, at least.

“All the Cuban people were going to rise up in rebellion against Fidel Castro,” Sanders mocked. “They forgot that he educated their kids, gave their kids health care, totally transformed society.”

Bernie, then a presidential elector to the Trotskyist Socialist Workers Party, today promises his own transformed society. He announced his 2020 presidential campaign vowing to “transform the country” and complete “the political revolution.”

That campaign includes a class-warfare campaign of agitation and propaganda.

Eerily Castro-like, Bernie echoes Fidel, albeit ratcheting up the zeroes: “There should be no billionaires,” declares Bernie.

Presumably, Bernie would have made exemptions for his wealthy pal in Havana, and no doubt for himself as well.

Bernie personally is worth at least a couple million. Like a long line of limousine leftists, mansion Marxists, and Dom Perignon Trotskyists, Bernie is no beggar. The 1980s Bolshevik Party Boy has sworn no vow of poverty or oath of economic equality with California fruit pickers and Kentucky coal miners.

Politico last May referred to Bernie as “a three-home-owning millionaire with a net worth approaching at least $2 million.” Bernie acknowledged to the New York Times his millionaire status. Among his latest homes is one he and his wife Jane bought with cash, $575,000, in the Champlain Islands, where they summer together. Graced with 500 feet of Lake Champlain beachfront, this is Bernie’s dacha on the Black Sea.

In addition, Bernie and Jane in 2009 dropped $405,000 on a handsome Colonial home in Burlington, Vermont. The socialist couple wasn’t finished with the land grabs. They forked over $489,000 for a row house in Washington, D.C.

But the masses are expected to ignore that, just as they were expected to shrug off Fidel’s excesses. Leaving his lakeside dacha for his all-expenses-paid campaign trail, Bernie pivots on a dime and rolls up the sleeves to champion the proletariat. The billionaire bourgeoisie must be liquidated!

“Billionaires should not exist.” The new fist-in-the-air slogan of the Sanders movement for social justice.

Bernie grimaces, snarls, snaps a glance at the saps in his socialist army: “not a single billionaire has donated to our campaign.” The suckers cheer their leader.

Not that Bernie is against campaign cash. In fact, it’s interesting that as Sanders stokes class envy, he wallows in a mass infusion of contributions from rich liberal cronies. His campaign reports that in December he raised more than $18 million, his best month of the election cycle, and now leads all Democrats with an impressive $34.5 million raised in the fourth quarter of the most recent fundraising session. It’s doubtful that all that coin from the cash-basher came from miserly millennials chipping in a few bucks from their parents’ allowances. You can be sure that a pile came from rich people that Bernie might otherwise denounce as capitalist reptiles. You can also be certain that Bernie and buddies — in the name of economic justice — will not be redistributing any of those precious greenbacks to immigrants at border detention centers.

“Our political revolution is powered by the working class,” snorts Bernie, explaining that such is why “not a single billionaire has donated to our campaign.”

That being the case, the Brooklyn–Vermont–Washington millionaire should put his money where his mouth is and empower the working class by funneling greedy campaign cash back to the people — the rightful owners from whom it was no doubt stolen. Sanders should sanctify the revolution, redeeming these profits and converting them into ploughshares for the working man.

Fat chance. Bernie is basking in the cash. Bernie money is good money.

“Capitalism as an economic system has to be radically altered and changed,” said Bernie in December 1987.

But as for his pocketbook, Bernie wants no radical alterations. His wallet is fat, just the way he and his fellow champagne socialists like it.