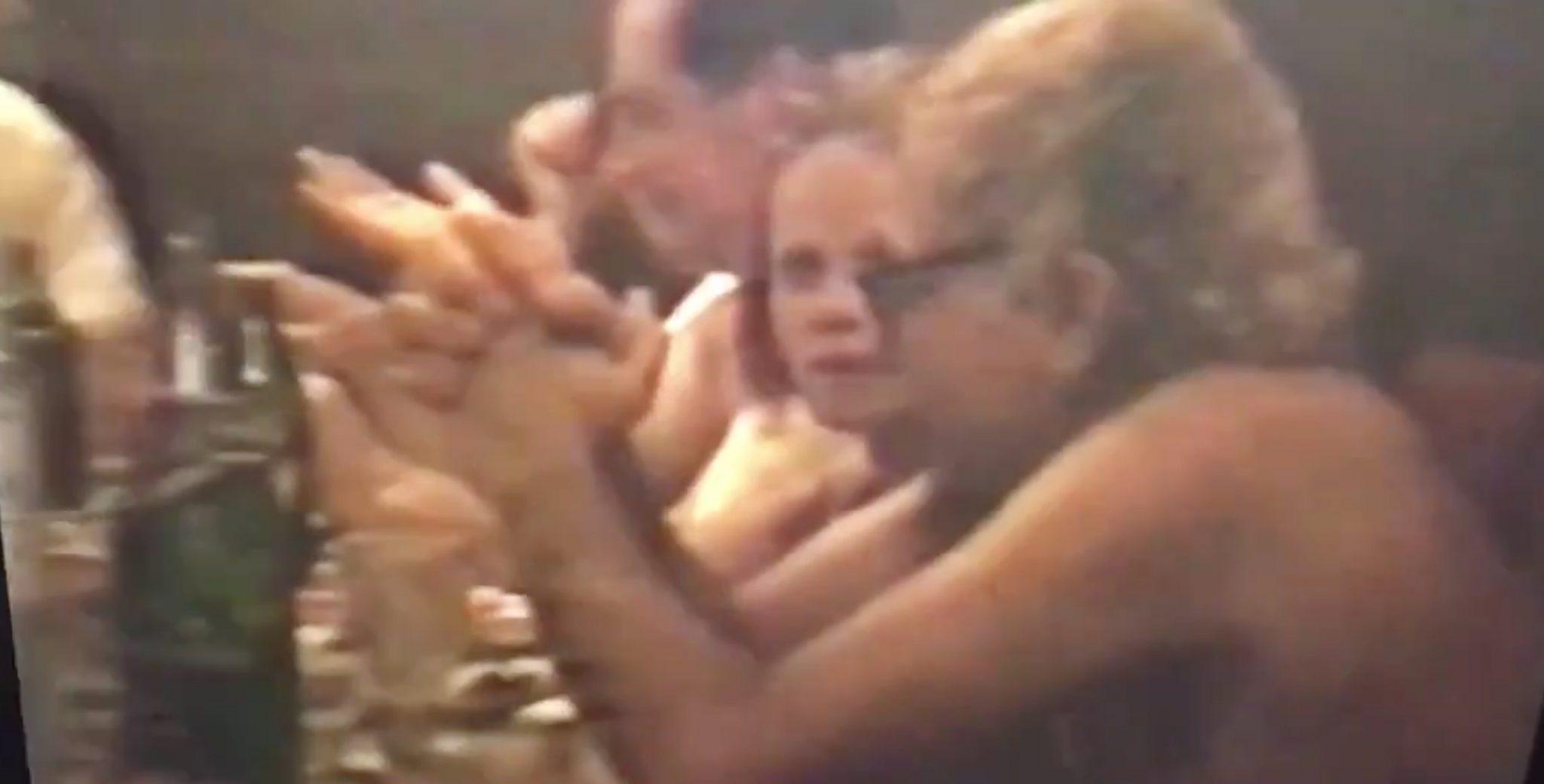 Amazing footage has been posted by the veteran left-wing magazine, Forward. The video comes from Bernie Sanders’ honeymoon to the Soviet Union in 1988, along with his bride and other officials from Burlington, Vermont, where he was mayor. The footage shows a literally shirtless Bernie partying like a frat boy and swilling booze with the Bolshies while singing — what else, eh? — comrade Woody Guthrie’s collectivist classic, “This Land Is Your Land.”

The video is striking. It’s a surreal scene, evincing a primordial ambiance — a room that must have smelled not only of bare-chested, caveman-ish communism, but of Stoli, sausages, and body odor.

Bernie’s band of “democratic socialists” will, naturally, find marvelously creative ways to excuse the spectacle. They’ll try to turn the whole smelly thing against Bernie’s detractors. Any rascally Republican who cries foul over the footage will be denounced as a modern-day Joe McCarthy.

Hey, the left is the left. Liberals would throw a hissy-fit if video was found of Elizabeth Warren in Indian headdress dancing the Kalinka at a vodka party in the Kremlin.

But again, this Bernie gem was posted by the Forward, under the eye-catching title, “Footage Of Shirtless Bernie Sanders Drunkenly Singing With the Soviets In ’88 Surfaces.”

And why is this significant, beyond the obvious? Let me offer some historical context, repeating what I’ve shared here in the past at The American Spectator:

Bernie married his current wife, Jane, in 1988, and the two then headed for Mother Russia. They honeymooned in the USSR.

Or at least it seemed to be a honeymoon, to rational people. Bernie’s apologists object to framing the sojourn as some sort of Russian romance for the future Democratic Party star who snatched 13 million votes in the 2016 primary.

What was it, Bernie?

In October 2015, an MSNBC reporter, Thomas Roberts, asked Bernie point-blank: “Did you go on your honeymoon to the Soviet Union?” Sanders shrugged: “The fact is that I went to establish a sister city program with Yaroslavl, then in the Soviet Union, now an important city in Russia which is still in existence today. The purpose of that trip was a sister city. Did it take place after my marriage? It did.”

As Bernie’s wife would attest, they not only visited the grumpy city of Yaroslavl, but the party animals cruised the Volga en route to St. Petersburg and Moscow and other undisclosed “landmark sites.” (Lenin’s tomb perhaps?) “We went to St. Petersburg, we went to Moscow, too,” fondly recalls Jane.

Bernie dismissed as “silly” and “absurd” the notion that the trip revealed him as “some type of communist sympathizer.”

Yes, why would anyone think that? Nothing in Bernie’s past would raise, er, red flags.

For the record, in this same period Bernie made pilgrimage to Cuba and Nicaragua, to bask in the triumphs of la revolución there. A few years prior, in 1980, when normal Americans were choosing between Jimmy Carter and Ronald Reagan for president (I’m exempting John Brennan, Obama’s CIA director, who voted the Communist Party ticket of Gus Hall and Angela Davis), Bernie tossed his support to the Socialist Workers Party. Actually, as the Daily Beast reported, Sanders went so far as to have “served as a presidential elector for the Socialist Workers’ Party in 1980.” Sanders later fessed up in a 1988 television appearance. “I was asked to put my name on the ballot and I did,” he shrugged again, “that’s true.”

Not a lot had changed from the good ol’ days. After growing up in Brooklyn, Bernie began spreading his socialist wings, first landing at what Ron Radosh described as a “Stalinist Kibbutz” in Israel in 1963. Sanders worked on the Hashomer Hatzair kibbutz, comprised of pro-Soviet members who considered themselves “Marxist-Zionists.” Daniel Greenfield reported that Sanders spent “months” on this “Marxist-Stalinist” kibbutz.

After that, Sanders went to the University of Chicago. There he worked with the Young People’s Socialist League (“Yipsel”), the youth section of the (Trotskyist) Socialist Workers’ Party.

And so, when it was noted during the 2016 campaign that Bernie had “honeymooned” in the USSR one year before the Berlin Wall fell, well, more than a few Americans had their suspicions.

And yet, Bernie’s cronies would sneer at such suspicions. They barked that this was a mere fact-finding trip, so essential to the good commerce of Mayor Sanders’ Burlington enclave. How dare anyone think this was anything but good business practice!

Well, as they say, let’s go to the videotape. Take a look for yourself. Bernie seems to be intoxicated by the Soviet environs. Maybe he was simply trying to cut a deal to negotiate a partnership for a distillery in Burlington.

It makes one wonder if there’s more tape to come. Perhaps a shirtless Bernie and Bolshevik friends pounding their chests as they belt out the “Internationale”?

Nyet! our progressive friends will shout at us. That’s a bunch of red-baiting borscht. Angry “progressives” can add this latest calumny to their list of lamentable examples of poor Sanders being “red-baited” by pig-headed right-wingerswho just don’t understand the wonders of “democratic socialism.”

No doubt, Bernie and bride went to Moscow to, uh, preach free markets. A business transaction. Yeah, that’s it, comrade. Imagine thinking anything else.