by Daniel J. Flynn
Empty pedestal where statue of abolitionist Hans Christian Heg used to stand, before being torn down by protesters, Madison, Wisconsin (Aaron of L.A. Photography/Shutterstock.com) 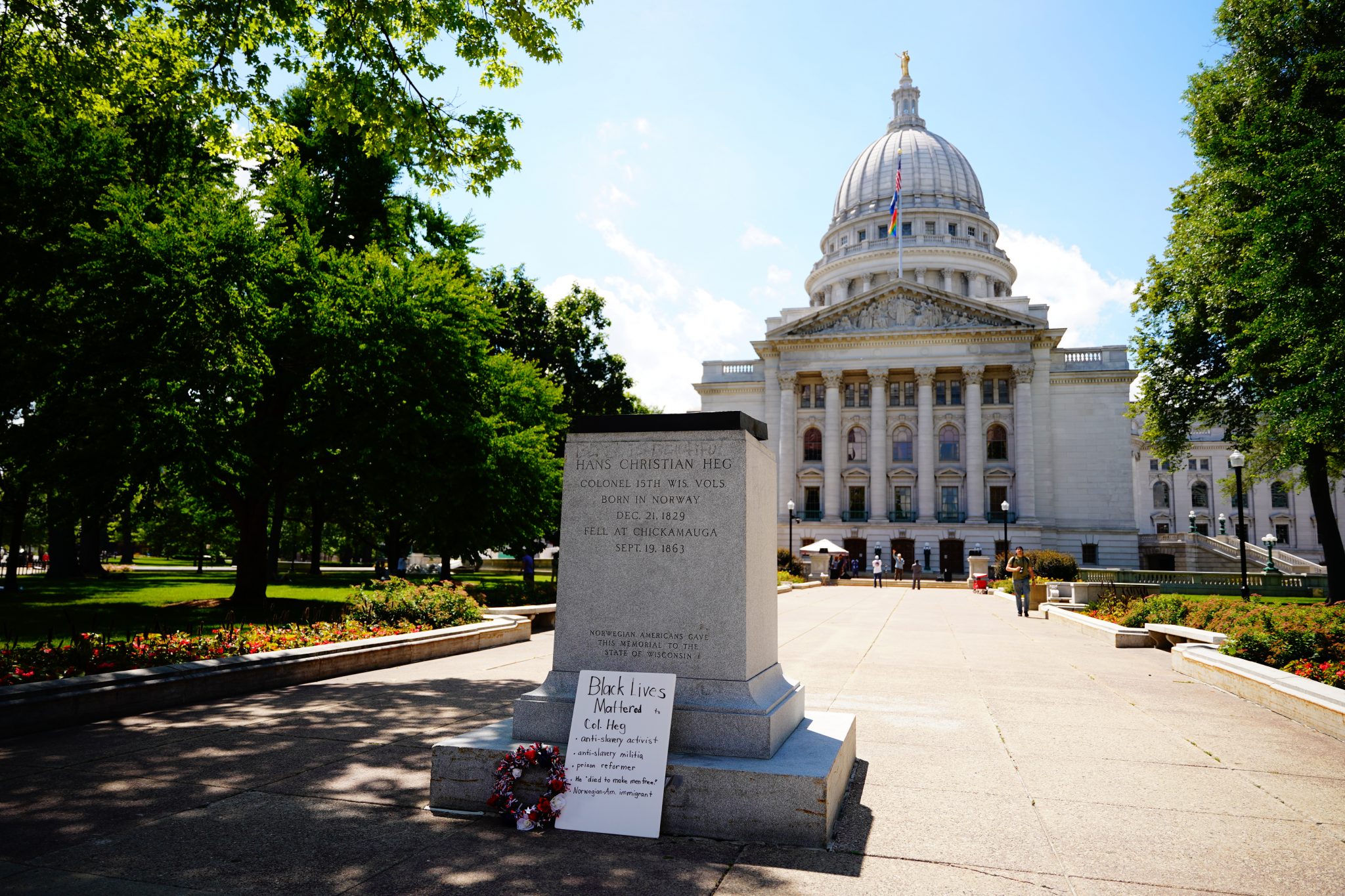 “For of all sad words of tongue or pen,” John Greenleaf Whittier reflected, “The saddest are these: ‘It might have been!’ ”

What might have been if the mobs tearing down statues did not skip history class?

For one, vandals in Whittier, California, would not have spray-painted “BLM” and “F— Slave Owners” on a statue of the town’s namesake. Whittier, a founder of the American Anti-Slavery Society, an Electoral College member who twice cast his ballot for Abraham Lincoln, and the author of several collections of abolitionist poetry, did not, needless to say, own slaves.

So much of what the Left wants for us did not work in America and so much of what it wants gone did work for America. So, to advance their current project they need to erase all that came before.

The use of spray paint, or Molotov cocktails, to convey a political message necessarily marked that political message as benighted in a more enlightened America. In the distorted lens of 2020, passion masquerades as sophistication.

The non sequitur toppling of statues of Abraham Lincoln, Ulysses Grant, Frederick Douglass, and others who dedicated much of their lives to the proposition that black lives matter announces the profound ignorance of Black Lives Matter. Just as when Black Lives Matter demands the defunding of the police as 81 percent of African Americans tell pollsters they want more or the same number of cops in their neighborhoods, BLM activists mindlessly attacking statuary memorializing abolitionists clues in observers to the uneducated, anti-intellectual, ignorant nature of the brat-fit before us.

In Illinois, a state representative seeks to codify that ignorance by calling for “the abolishment of history classes.”

“When it comes to teaching history in Illinois, we need to end the miseducation of Illinoisans,” Rep. LaShawn K. Ford explained in a news release. “I’m calling on the Illinois State Board of Education and local school districts to take immediate action by removing current history books and curriculum practices that unfairly communicate our history. Until a suitable alternative is developed, we should instead devote greater attention toward civics and ensuring students understand our democratic processes and how they can be involved.”

Tearing down statues, banning the display of symbols, prohibiting the broadcast of movies and television shows that present a favorable image of Southerners, policemen, and other stock villains, assaulting people for holding different viewpoints, burning books, and outlawing the teaching of history all scream “Taliban,” “Vandal,” “Philistine,” “Nazi.” If only they attended history class instead smoking cigarettes under the bleachers, the inheritors of these loathsome traditions would know this. People who yesterday refused the role of student today assume the role of teacher. May we now take our turn to smoke cigarettes under the bleachers?

They seek to unmoor Americans from their history. When you possess no past, any future — including one in which white people pay black people for being black people, censorship rather than free speech serves as a national ethos, and ideological enforcers replace the police — will do.

The Left hates history because of its recalcitrance. It does not comport to its ideological needs. It makes a mockery of a priori assumptions. It starts a debate instead of silencing one. It presents a record of what worked and what did not. So much of what the Left wants for us did not work in America and so much of what it wants gone did work for America. So, to advance their current project they need to erase all that came before — not just Nathan Bedford Forrest but George Washington and Theodore Roosevelt and Francis Scott Key. The woke represent the only people worth knowing about anyhow. Just ask them.

Americans invented the internet, the airplane, the lightbulb, and so much of what makes modern life modern. Americans created the first vaccine for polio and essentially eradicated yellow fever. We discovered DNA, alone stepped foot on the moon, joined the Atlantic and Pacific Oceans thousands of miles before nature did, helped defeat Nazism and Communism in Europe, and provided the world with a working example of self-government to emulate. That people listen to jazz and rap and rock, play baseball, and marvel at The Wizard of Oz beyond our borders says something nice about our country.

One grasps why anti-American ideologues seek to censor all that through “the abolishment of history classes.” One more tightly grasps the need of history now more than ever.

This moment demands a reckoning, just not the reckoning LaShawn K. Ford and others demand.

“Americans need to face the truth about themselves,” Jeane Kirkpatrick once reminded, “no matter how pleasant it is.”