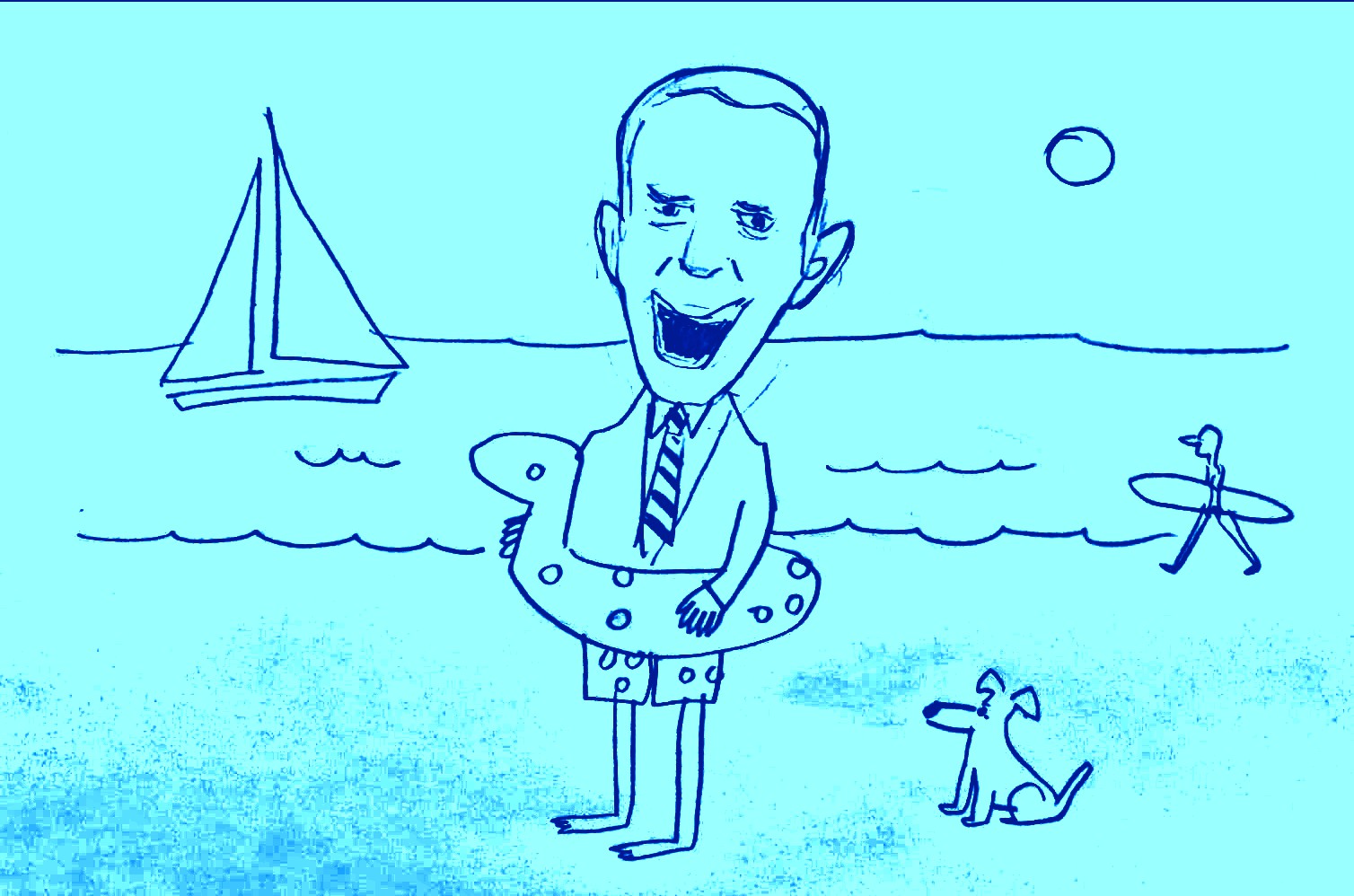 You know there’s an election this summer because every time you greet a neighbor on the street saying, “It’s a nice day,” he answers irritably with whatever random information he just read in the press: “But what about the damn unemployment figures?” Last night I went to get an ice cream and when I asked the woman at the counter for “two balls,” she smiled at me knowingly, flashed me a V with her fingers, and winked furtively while whispering, “Yessir! Keep America Great!” It took me a while to realize that she was speaking to my electoral testosterone.

The only plan the Democrats have for America is to take down Trump, as if he were one of those statues they like to knock down. Their only candidate is not Biden, but Not-Trump.

I try to disconnect from politics these days, and it’s not easy. With so much political information I feel confused, like Biden when he meets a journalist who, instead of giving him a massage, actually asks him questions. This morning, when I arrived at the beach, I saw a swimmer in danger of drowning. The current was dragging him out to sea, so I shouted to him, “Is everything all right? Do you need help?” As he continued to drown, he turned around to yell at me, “Come on, man! Are you a junkie? Are you a junkie, huh?” Then I lost sight of him. I guess his best days still lie ahead.

There are less than 90 days left until the election, and anything can happen (complete the sentence with a stupid cliché to your liking). Yet right now the waves break on the shore, softly bathing my feet. The horizon is a cyan canvas with golden flashes, and I think what we really want from a good politician is that he be effective, invisible, and mute. I don’t know at what point we decided that a president should be a leader of the masses. He is not a rock star, and his mission is not to entertain you, unless you are the kind of person who can get emotional reading the Federal Register. And yet, in the middle of an election campaign everything changes. I guess what politicians want right now is to get on television over and over. Perhaps that explains why Biden has been appearing on different television channels simultaneously for several days, spouting the same nonsense but wearing different ties. He’s everywhere. He’s like a plague. Just yesterday I opened a can of Goya beans and there was Biden, taking a nap.

This gift of ubiquity comes about because the Democratic candidate doesn’t actually exist as such. He’s just a left-wing voodoo charm, like the ones shamans wave about to cure a sick believer right before he goes and dies (it’s distressing to think about the number of men who have died while contemplating some loincloth clad guru prancing about). But that seems to be the role of the vice president under Obama, another notorious shaman who specializes in selling fake amulets.

The only plan the Democrats have for America is to take down Trump, as if he were one of those statues they like to knock down. Their only candidate is not Biden, but Not-Trump. Biden is just a clueless old man who happened to be passing by, while what the Democrats are looking for is a plebiscite on the president. That’s why you won’t hear any bills or ideas, just unrest in the streets, smoke-filled arguments, demagoguery, and tons of panic. A socialist never comes to power without first getting the voters scared out of their wits. That’s why the Left is happy with the Marxist hordes that raid shops, break into homes, and insult old ladies during prime time. Some shake the tree, and others collect the fruit. The truth of it is that expecting the Left to give up the revolution is as frustrating as expecting me to give up beer.

Biden’s voice contributes to my state of confusion. It is a confused murmur, a disconcerting stammer, an undefined tremor, a snore like an African baboon’s. At times, it’s a gurgling grunt, like a little squirrel who’s just been caught stealing a handful of nuts. His discourse is nonexistent. Biden’s campaign is the press, which lies largely in Democratic hands, and those street gangs that frighten citizens and machete away the traces of history. The fact is that Biden’s election manifesto can be summed up with “ummmmm.”

On the other hand, reality is not so nebulous. What is just around the corner — and forgive my optimism — is a total crisis. The collapse of international economy, a pandemic with thousands of victims, and a rise in socialism and communism throughout the world, backed by China, evil China. It will be a complete disaster, and we will need to go back to basics: family, local business, sacrifice, freedom, property, hope, and values. The United States has a stockpile of all these things, as long as it doesn’t fall into the hands of the typical Democratic leader who believes that the best way to deal with a total crisis is to offer free sex change operations, or promising to leave a cleaner planet. Reminder: the biggest green policy we’ve ever known is the coronavirus pandemic, and it’s true that it’s quite effective in conserving pangolins, but it’s not very good at conserving the human race.

While I soak my body in the seawater, I guess that, when all’s said and done, elections are all about deciding on concrete and extreme things, like who will push the big red button to defend you in the event of a nuclear war. And I suspect that you’d rather have someone other than Biden in charge, because that guy is likely to get confused and press the button on his own pants, or press the yellow button and cause a downpour of acid rain, or fall asleep on the dashboard, dropping the nuclear bomb on himself, only to emerge from the rubble with one of his famous speeches to the nation: “Come on, man! What’s wrong with you, huh? Have you done cocaine, huh? Are you all damn junkies, huh?”