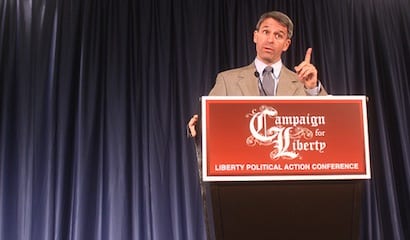 ALEXANDRIA, Va. — Virginia Republicans this weekend will launch an experiment in politics, opting for a party convention instead of an election to choose a slate of candidates for statewide offices.

The move eliminates a long, drawn out and often expensive primary season.

But while the goal is to give voice to a diverse electorate, the gathering represents a growing divide within the state party.

The Virginia GOP made the decision to move from a primary to a convention structure in 2012, effectively ending Lt. Gov. Bill Bolling’s campaign for governor. The structure allows delegates, elected from counties and cities throughout the state, to select nominees for office and favors grassroots candidates like Attorney General Ken Cm, the heir apparent for the gubernatorial nomination.

Cuccinelli is expected to receive the GOP nomination at this week’s state convention in Richmond.

Tea party officials argue the convention structure levels the playing field because it gives candidates who don’t have the money to sustain a long primary run a chance at the nomination.

“We advocated changing back to a convention primarily because it seemed the well-heeled, tried-and-true, same-old same-old (candidates) were going win GOP primaries time and time again,” said Keith Freeman, chairman of the Hampton Roads Tea Party. “There’s no way that the average person could take that much time off to devote the better part of a year and the vast resources it would take to win a primary. So we thought this was the better mechanism for the average person to participate in.”

But Bolling spokeswoman Ibbie Hedrick told the Washington Post on May 8 that the lieutenant governor’s decision to drop out of the race and not attend the convention was the result of an exclusionary policy meant to sideline opposing views.

“If we want to grow the Republican Party over time, we have to involve more people in the process of nominating our candidates, not fewer. Conventions empower the most strident voices within a political party, and they effectively disenfranchise more mainstream voters. Given these concerns, the lieutenant governor does not plan on attending or participating in the convention,” Hedrick said in a statement.

So like in a chess match, opposing factions of the Republican Party have maneuvered to see who will control candidate selection ahead of the November elections.

Geoff Skelley, media relations coordinator at the University of Virginia’s Center for Politics, said the Virginia GOP convention could be seen as a microcosm of the ideological battle being played out within the Republican ranks.

“This is going to be an ongoing debate in the Republican Party, not just in Virginia, but also nationally going forward,” he said. “I think the feeling among many conservatives is that a convention guarantees them a more conservative candidate, which is what they want. But many people in the Republican establishment fear conventions because they view primaries as more likely to nominate more electable candidates.”

But the ideological divide in Virginia may not split between the Tea Party and establishment Republicans, but also within other disparate Tea Party factions.

As reported by the Watchdog.org, Virginia Bureau this week, the Tea Party Patriots Federation has produced a list of vetted candidates it approved ahead of the convention, drawing the ire of other Tea Party groups that said the process overlooked their views.

John Jaggers, director of operations for the Northern Virginia Tea Party, said that in spite of the vetted list, Tea Party factions were still free to support whichever candidate the saw fit. “Tea parties can’t be coerced,” he said. “They can only be lead and everybody’s free to follow. Some will and some won’t.”

The challenge that lies ahead for the Virginia Republican Party, no matter who wins the nomination, is maintaining the GOP base and attracting independent voters.

“Certainly candidates, once they have wrapped up their nominations, try to move to the center,” said John McGlennon, a government professor at William & Mary University in Williamsburg. “It becomes a little bit more difficult when your nominating convention is going to be comprised very much of people excited by ideologically pure statements and rhetoric.”

The gamble the convention takes, McGlennon suggested, is giving ammo to Democrats who will try to paint tea party candidates as polarizing. “Both parties have gone through this kind of exercise over the years and have sometimes had to pay a pretty steep price when they have been perceived by the voters as outside of the mainstream,” he said.

Freeman said that the Hampton Roads Tea Party helped sponsor several forums for candidates to reach out and meet voters on in person, a process he said is more honest than big-money ad campaigns and will attract voters to Tea Party candidates more than the convention.

“In fact, we’ve empowered people,” he said. “The fact that the well-heeled party apparatus tends to win every single time, then the voter only sees who has the most commercials. I think the best way is for the candidate to travel the state and convince the individual voters and possible (delegates) to the convention that they are the best candidate. If you are relying on commercials, maybe you should be a Democrat.”

Reprinted with permission from Watchdog.org.