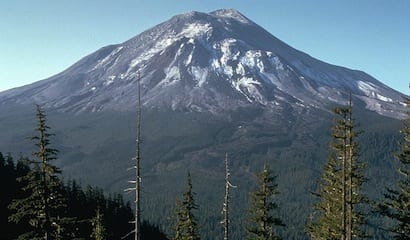 Last week the R Street Institute, which claims to advocate free market policies, issued a statement celebrating the anniversary of the establishment of Mount St. Helens National Volcanic Monument in 1982. This is, at best, misguided. The federal government’s ever-growing control over and continuous acquisition of land across America is the antithesis of the institution of private property and undermines conscientious private stewardship of land, waters, and other natural resources.

Every day, we see the results of a century of mismanagement of government-owned forests. Failure to harvest timber allows the forests to become overgrown and filled with overstressed, diseased, beetle-ridden, dying, and dead trees—leading to millions of acres scorched by catastrophic wildfires every summer, year after year.

Far more instructive is what Weyerhaeuser did on its forest land adjacent to what is now the National Monument. The volcanic eruption of Mount St. Helens on May 18, 1980, instantly destroyed 150,000 acres of forest—trees were flattened by the shock wave or killed by the intense heat. Of the forest affected, Weyerhaeuser owned about 68,000 acres, the U.S. Forest Service 64,000, Washington State 12,000, and other private forest owners 6,000.

Weyerhaeuser immediately acted to salvage the wood from the dead trees and to replant the damaged areas. Over a period of two years, it restored the desert-like post-eruption wasteland into a healthy, vigorous, thriving and sustainable forest. Before the wood could be damaged by insects, disease, and rot, Weyerhaeuser salvaged 850 million board-feet of lumber—enough for 85,000 three-bedroom homes.

The company also helped establish the Charles W. Bingham Forest Learning Center within the volcanic blast zone, with an emphasis on school trips for students and teachers to learn about sustainable forestry practices and the achievements of private stewardship. R Street proudly points to the 230,000 annual visitors to the taxpayer-funded National Monument each year, but it doesn’t mention the estimated 200,000 who visit the Forest Learning Center operated by Weyerhaeuser.

Perhaps the most instructive activity is to look down on the scenic vista at the demarcation line between Weyerhaeuser’s land and that of the National Volcanic Monument: on the Weyerhaeuser side, a bright-green, healthy, thriving forest returned to pre-blast conditions and abounding in wildlife; on the government’s side, dull and dense shrub-covered lands that were set aside to recover naturally. In fact, all across the West, students of natural resources can usually tell easily whether the forest they are driving through or flying over is government land or privately owned, simply by the health of the land and the trees.

After wrongly claiming that the National Monument is a conservation success story, R Street then goes on to praise the federal Land and Water Conservation Fund (LWCF), through which the government has spent billions of dollars to acquire private land. It is among the environmental programs that rural Americans hate the most. Small landowners, family farmers, ranchers, tree farmers, and miners are constantly faced with the threat of government acquisition of their land.

The federal government has learned a trick to acquire private land from supposed “willing sellers”: prevent landowners from being able to utilize their property. The government just needs to set aside some habitat under the Endangered Species Act, even if the listed species don’t occur on the land, or designate a jurisdictional wetland of the United States, even though it is dry. You get the idea.

Family landowners soon find that they cannot make use of their property without risking staggering fines or prison time. The collateral value of their land is gone, so they cannot borrow money, and no one will buy their suddenly useless tracts—except, of course, for the federal government and its environmentalist allies. Land trusts typically pay a few cents on the dollar and then quickly resell parcels to the federal government, usually for far more than they paid. The LWCF thus continues to add to the staggering amount of land that the U.S. government already owns, which is approaching half of the nation’s entire land mass. The four federal land agencies alone control nearly 30 percent of the country.

Further, R Street misrepresents Ronald Reagan’s vision, beliefs, and record. Shortly after taking office in 1981, President Reagan and his secretary of the interior, James Watt, announced an immediate and dramatic shift in federal land policy. They argued that the government already owned enough and should begin to place a major emphasis on caring for it, especially the national parks. In March 1981, Reagan announced a moratorium on additional land acquisition by the federal government.

This dramatic shift was much needed. Almost every category of federal land had fallen into disrepair, with billion-dollar backlogs for the most basic maintenance (a condition that continues to this day, unfortunately). Reagan slashed the Land and Water Conservation Fund in the budgets he sent to Congress and even zeroed out land acquisition (although it was restored by Congress).

While it is true that President Reagan signed a number of bills creating new wilderness areas that enjoyed bipartisan support in the congressional delegations from the states where they were located, he also vetoed several wilderness bills that did not enjoy such support. Further, he strongly resisted congressional efforts to limit natural resource production and recreation on National Forests and Bureau of Land Management properties.

Reagan’s vision went even further than this, as William Perry Pendley documents in his new book, Sagebrush Rebel: Reagan’s Battle with Environmental Extremists and Why It Matters Today.  In the late 1970s before he was elected president, Reagan clearly described the federal government’s “land hoarding and land grabbing” and many of the disastrous management policies that were degrading the federal lands.

Free-market environmentalism and private conservation have characterized much of American history and survived despite the government’s growing ability to take private lands by force and to pay for its ownership and mismanagement with taxpayer money. The Weyerhaeuser lands near Mount St. Helens are a good example of the former, the adjacent National Monument an example of the latter.

Conservatives can do better than to promote a rehash of the failed policies of government ownership and massive mismanagement of lands, waters, and natural resources.