by Daniel J. Flynn
Protester outside burning building in Minneapolis, May 28, 2020 (Alex Gakos/Shutterstock.com) 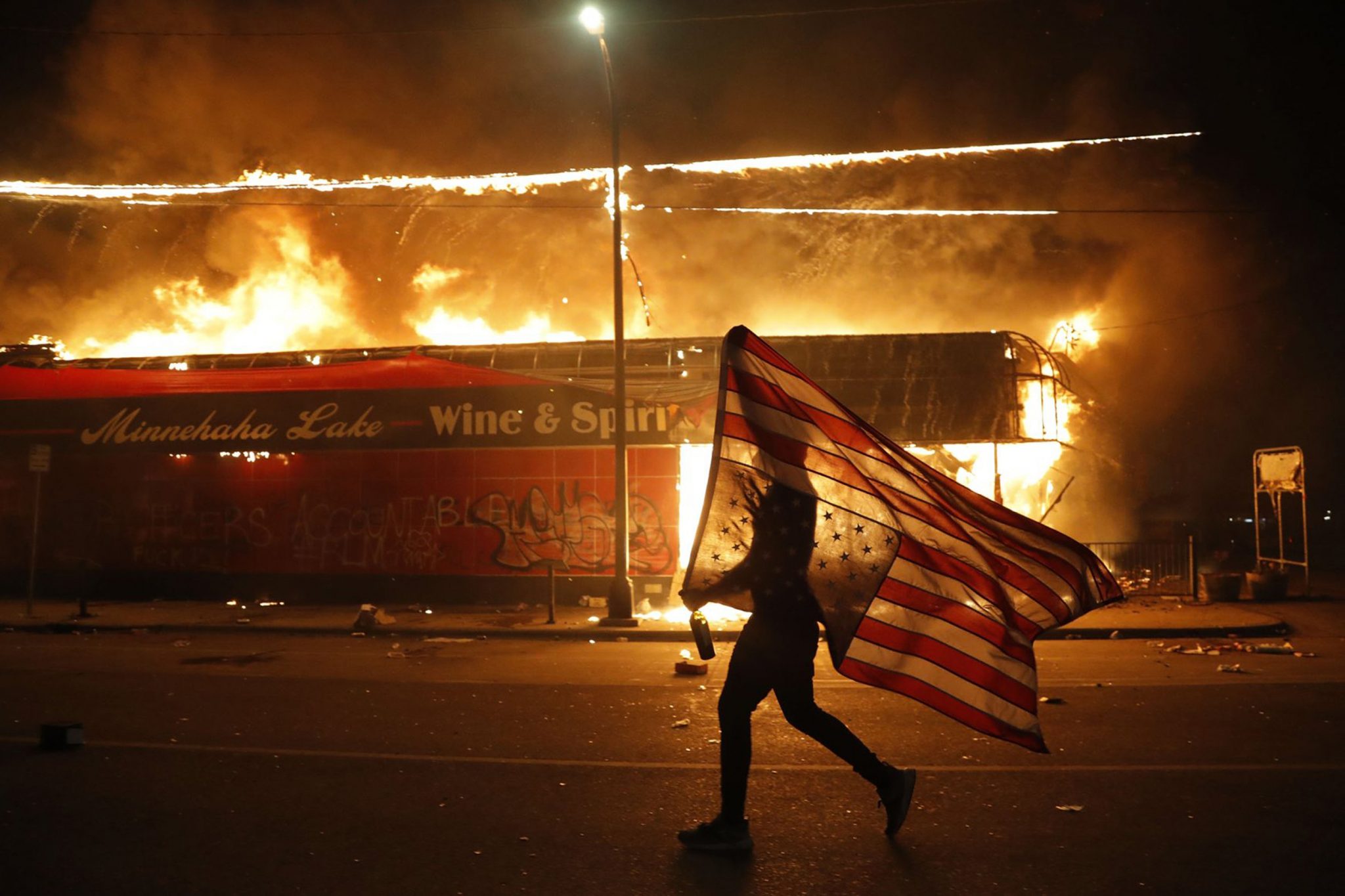 Gerry Cheevers, Mr. Wrestling II, the Dread Pirate Roberts, and Zorro felt really at home in 2020. Everyone else wishes for the next few hours of this century of a year (so epochal that an entire nation, Chaz, rose and fell and both a plague and its vaccine announced themselves) to pass faster than you can say Alexander Vindman.

Yes, the House of Representatives impeached Donald Trump (for daring to suggest wrongdoing by an upstanding citizen he confused with that other Hunter Biden who cheated on his dead brother’s widow with a stripper he impregnated before marrying a third woman 10 days after first meeting, cocained his way out of the Navy, and cajoled various foreigners into depositing large sums of money into his bag) this year even though a Mandela Effect causes everyone to remember it as occurring a long, long time ago.

Foul sums up the mood, political or otherwise, in 2020.

In a nutshell, 2020 was mostly peaceful protests occurring within a mostly healthy year during which toilet paper remained mostly available. We experienced a shortage of really all tissuey products, kettlebells, and coins, and a surplus of Karens sternly lecturing us to cover our faces walking down the street, hanging out in public parks, and hiking in the woods. Scolds speak fondly of 2020 for decades to come.

Despite all the social distancing, social media, and social justice, 2020 struck its captives as a very antisocial year with little in the way of ice-cream socials or gatherings of any kind.

Rights became crimes. Cops arrested a minister for preaching in Florida, protesters for walking on the sidewalk near the governor’s mansion in North Carolina, beauticians for performing appointment-only nail and eyelash services in Texas, and a solitary man for paddle-boarding on the water in California.

Crimes became rights. Protesters exercised their First Amendment rights by looting stores, Talibanning public art, committing arson, and assaulting people who disagreed or advertised “punch me” on the back of their heads all in full view of policemen and television cameras. MSNBC’s Ali Velshi described the scene as “mostly a protest” and “not, generally speaking, unruly” as he reported in front of a police building engulfed in an arsonist’s flames in Minneapolis.

Progressives cried foul at Mitch McConnell’s judicial maneuverings that culminated in Amy Coney Barrett’s October confirmation to a high court whose outlook she surely transforms. Conservatives cried foul at a presidential election that made voting so easy that even a stranger could do it for you. The common denominator? Foul. Foul sums up the mood, political or otherwise, in 2020.

Clear foreshadowing came early with the way-too-soon death of Kobe Bryant in Calabasas. A murkier denouement arrived on Christmas in the form of a man who lived quietly dying loudly in Nashville. In between, Rep. Jim Clyburn resurrected Joe Biden’s left-for-dead political career in February. In March, Michael Bloomberg asked himself upon dropping out of the presidential race: What doth it profit a man to gaineth the delegates of American Samoa but loseth $1 billion? In June, A&E cancelled its top-rated show Live PD, The Simpsons announced a prohibition on whites voicing characters of color (does yellow not count as a color?), Hulu pulled an episode of The Golden Girls in which Blanche and Rose answer African American visitors at the door in mud masks, NASCAR banned Confederate flags at its races, and the San Francisco branch of the Taliban toppled statues of Ulysses Grant, St. Junípero Serra, and Francis Scott Key. David Blaine held onto helium balloons that floated him 25,000 feet above sea level in September. He recklessly did not wear a mask. The governor of Oregon, not heretofore known as a law-and-order politician, encouraged neighbors to call the cops on families who gathered with more than six around the table for Thanksgiving. Turkeys applauded.

The people Van Morrison referred to in the first instance in his 2020 protest song “As I Walked Out” when he asked, “Why are they working, and why are we not?,” appreciated to the point of demanding that those unwillingly barred from employment affix stickers on their workplaces noting “Heroes Work Here” and lawn signs in front of homes saying, “Thank You Essential Workers.”

Silver linings on the cloud included open seats on public transportation, blanket immunity for wearing pajamas and drinking at inappropriate times of day, less traffic, and studios delaying (hopefully forever) numerous overbudgeted, subliterate superhero movies. Not everyone who partied like it was 1999 in 2020 attended that mysterious bat barbecue with Netflix’s Reed Hastings and Zoom’s Eric Yuan in January at Jeff Bezos’s house.

Elon Musk enjoyed an amazing 2020 as everyone else wished to press fast forward. SpaceX became the first private company to propel people into orbit, which it did in two separate launches. Tesla surpassed Toyota as the world’s most valuable automaker, which helped make Musk the third-richest man. The S&P 500 included Tesla in its index. Musk contracted coronavirus, his girlfriend Grimes birthed their child, whom they named X Æ A-12, and the tycoon further thumbed his nose at California busybodies (who forbid such a name) by balking at Alameda County officials attempting to close production at a Tesla plant. He tweeted in August, “Bureaucracy is inherently kafkaesque.” Other 2020 tweets include: “Pronouns suck,” “Cancel cancel culture,” and “SEC, three letter acronym, middle word is Elon’s.” Musk moving from the Golden State to the Lone Star State both reflected and influenced the exodus of elites from California.

A tattooed, pierced, meth-, mullet-, and man-loving (not necessarily in that order) polygamist, Second Amendment supporting, country-music singing, tiger-training, magician zookeeper achieved his lifelong ambition of fame in 2020, albeit from a prison cell — an ironic juxtaposition that seemed so very 2020. We binge-watched (a very 2020 term) Joe Exotic on Tiger King and, as ratings showed that we tuned out today’s obnoxiously preachy athletes, a documentary starring a basketball player who reasoned in more enlightened times, “Republicans buy Nikes, too.”

Nobody better represented an escape from 2020 than Nathan Apodaca. In a 22-second TikTok video watched by tens of millions, an always-look-on-the-bright-side-of-life commuter with a feather (one almost sees it blowing in the wind) tattoo on his head glides down a highway offramp sipping a big bottle of Ocean Spray Cran-Raspberry as he sings along to the chilled-out Fleetwood Mac song “Dreams.” We later learned that Apodaca’s truck logging 320,000 miles died, which caused the 37-year-old to skateboard from his camper to his job at a potato warehouse. If he can sing and smile through his troubles, the video suggested, then maybe Americans can sing and smile through our troubles, too.

What one wishes as one wishes a happy new year tonight is that 2021 hits us as more singing-and-smiling Nathan Apodaca than killjoy Anthony Fauci, more David Blaine balloons in the sky than social-justice mob dragging statues of Christopher Columbus into the dirt, more cure than coronavirus.