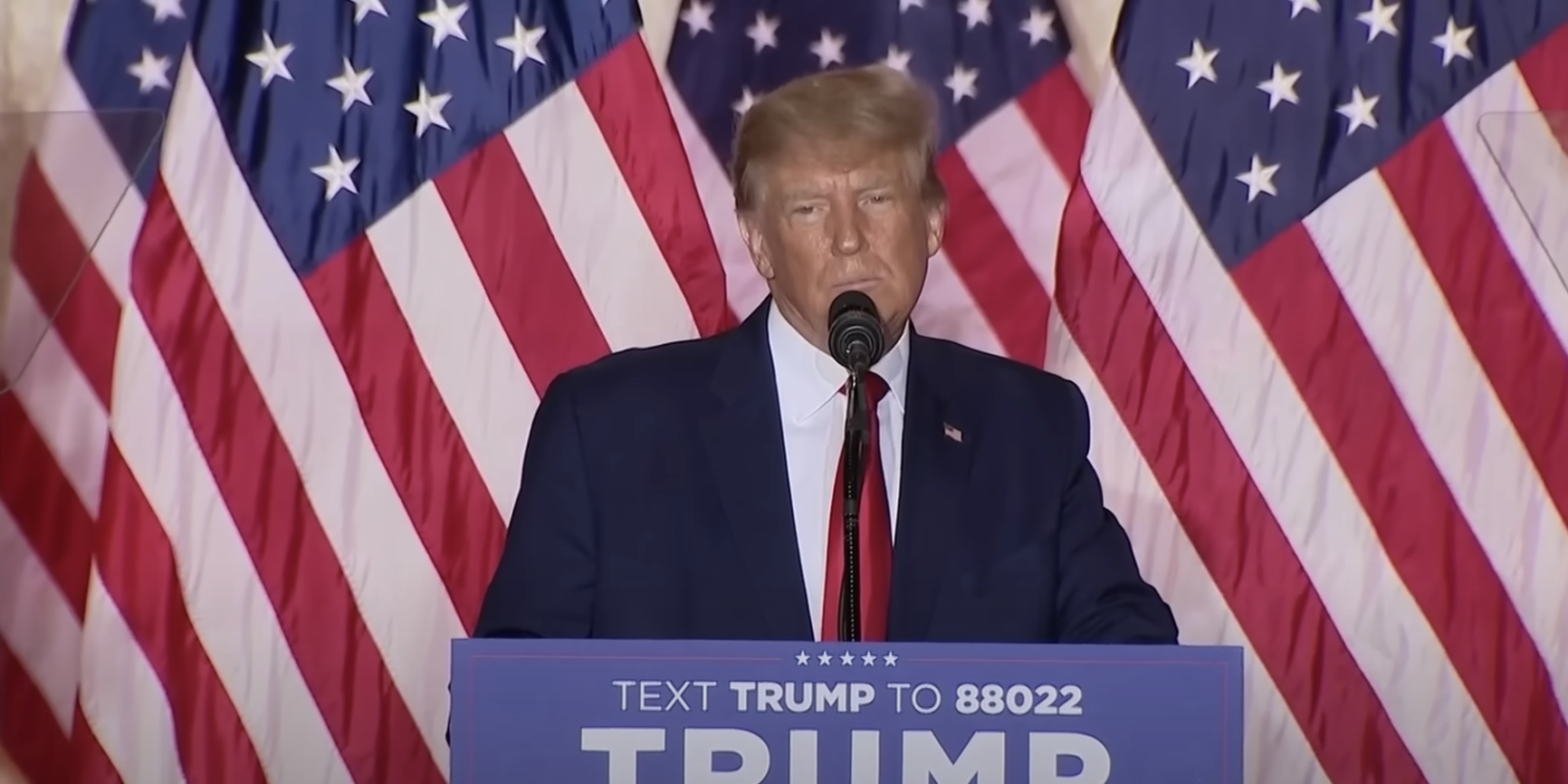 Over there at National Review, our friends have run a piece simply titled “No” — over a photo of former President Donald Trump as he announced his campaign for president this week.

Respectfully, my response to the Trump announcement is not only “Yes” — but (I’ll clean it up) — “Heck yes!”

To their credit, they run a list of Trump’s presidential accomplishments:

To his credit, Trump killed off the Clinton dynasty in 2016, nominated and got confirmed three constitutionalist justices, reformed taxes, pushed deregulation, got control of the border, significantly degraded ISIS in Syria and Iraq, and cinched normalization deals between Israel and the Gulf states, among other things. These are achievements that even his conservative doubters and critics — including NR — can acknowledge and applaud.

Then they list what they consider to be the reasons why he should not be returned to the White House — and in doing so illustrate exactly the Swamp’s way of thinking.

Trump was “chaotic,” with an “erratic nature and lack of seriousness.” They go on:

He often acted as if he were a commentator on his own presidency, and issued orders on Twitter and in other off-the-cuff statements that were ignored. He repeatedly had to be talked out of disastrous ideas by his advisers and Republican elected officials. He turned on cabinet officials and aides on a dime. Trump had a limited understanding of our constitutional system, and at the end of the day, little respect for it. His inability to approximate the conduct that the public expects of a president undermined him from beginning to end.

And right there is exactly the illustration of how Swamp dwellers — which include a lot of people Trump hired — behave.

In his recent book describing his experiences, Jared Kushner, the presidential son-in-law who was appointed as a senior White House aide, describes his experience as someone who came to office with, like the president, no Washington experience. And, in doing so, he illustrates the problem exactly.

Jared’s previous time was in the business world. He writes this in Breaking History: A White House Memoir.

A “veteran” of the George W. Bush administration came to see him for a discussion of U.S.-China trade policy, telling Jared that using tariffs was a mistake (bold print for emphasis supplied):

When I asked him what he would recommend instead, he suggested more rounds of talks. I said the first thing that came to mind: “So you want us to accomplish something you couldn’t by doing it the same way you did?” For the Washington establishment, the answer to that question was a resounding yes. Many Beltway insiders are experts at pointing out problems, but they’re even better at shutting down solutions. When confronted with the potential risks of change, they play it safe for fear that any disruption to the current system will jeopardize their political careers. This explains why some of Trump’s own cabinet members clashed with him and those of us who believed it was time to take calibrated risks and deliver more opportunities for the American people.

The description of Jared’s experiences on the flap of the book says this:

When one reads the National Review “No” article, one sees exactly the problem that is, in fact, the real problem with Never Trumpers at large. Donald Trump, outsider, thought outside the box. He was innovative, a serious change agent in the White House — which is exactly why so many in the media and the Washington Establishment obsessively despise him.

As the Washington Examiner’s ace political reporter Byron York points out in his own recent book Obsession: Inside the Washington Establishment’s Never-Ending War on Trump, no less than House Speaker Nancy Pelosi was caught admitting that, in the words of Utah GOP Rep. Chris Stewart:

They’ve been trying to impeach and remove him literally from the day before he was inaugurated.

At this point, this obsession with stopping Trump has now long since morphed into a monumental battle to silence the millions of decidedly middle-class Americans who see the country divided between what the late Boston University professor Angelo Codevilla called “the Ruling Class” and its opposite — “the Country Class.”

And make no mistake: The speech that Trump delivered in solidly presidential style announcing his 2024 candidacy this week was in fact the next “opening round” of this battle.

Which is exactly why his opposition — in the media, the Washington Establishment, and more — will intensify as 2024 slowly approaches.

And, in this space, I wish him well — and great success. His success is essential to the future of America.

Jeffrey Lord
Follow Their Stories:
View More
Jeffrey Lord, a contributing editor to The American Spectator, is a former aide to Ronald Reagan and Jack Kemp. An author and former CNN commentator, he writes from Pennsylvania at jlpa1@aol.com. His new book, Swamp Wars: Donald Trump and The New American Populism vs. The Old Order, is now out from Bombardier Books.
Most Popular
1
The Right Prescription
Judge Rewrites Georgia Law to Favor Warnock
by David Catron

3
Buy the Book
Are We on the Road to Another Pearl Harbor?
by Francis P. Sempa